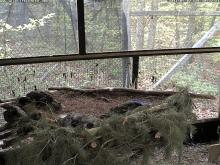 The WCV's tech team were hard at work this weekend, performing some scheduled network and website maintenance, as well as webcam fine-tuning. In short, we're getting there. Some improvements were made, and we should be seeing more over the next week. Within the next two days, the webcam should improve in quality. We're also working on the night vision as well. As many viewers noted, we are playing with an additional layer of netting on the back  of the eaglets' pen -- this is to darken the bright light that is being reflected off of the leaves in the woods outside of their pen. The eaglets did well this weekend -- as many cam viewers saw, they are being served three meals a day. Meals vary between fish and goose meat -- sometimes a mix of both. This provides them with a healthy variety in their diet.

Since some of our network and website issues were ironed out this past weekend, let's take a step back in time -- to last Thursday, April 28. As you know, the three eaglets each received a thorough examination by the WCV's veterinary staff -- a routine procedure for every patient that comes through the Center. All three eaglets were found to be healthy, but Dr. Dave McRuer, the Center's Director of Veterinary Services, provides a more thorough explanation, as well as one interesting finding.

Update from Dr. Dave A full physical exam was performed on the Norfolk Botanical Gardens eaglets over a two-day period last week. This was done to ensure they are healthy and to obtain some baseline data in preparation for their stay with us. On the first day [April 27], Dr. Miranda Sadar and I examined the following parts of the birds:

All of the birds passed with flying colours. The vets also obtained weights on the birds and took a blood sample to assess hydration, blood protein levels, and blood glucose. Finally, a small portion of the blood was taken for an ongoing lead study in which the Wildlife Center is participating, along with the Clinical Wildlife Health Initiative;  an interdisciplinary collaboration of organizations which share the view that wild animals presented to rehabilitation centers can be a source of valuable data for monitoring the health of free-ranging wildlife. In this lead study, we measure blood lead levels from all eagles, loons, vultures, and swans admitted to participating wildlife rehabilitation centers to assess the prevalence of lead in these species. Interestingly, #11-0476 – NV – had low blood lead levels of 0.127 ppm (parts per million), indicating recent exposure. Other than the lead finding, all other health parameters for the three eaglets appear normal at this time.

Q&A with Dr. Dave regarding the low lead levels discovered in NV:

Q:  How is it that there's lead in the male but not the females?
A:  Basically, this means that there is not a widespread contaminated source. The most likely source of lead contamination is through the ingestion of a lead object. This could be a lead bullet fragment embedded in the prey or perhaps a lead fishing sinker embedded in a fish.

Q:  So this is probably from something that he was fed?  What if he swallowed a lead sinker?
A:  Yes, it is likely from something that the eaglet was fed. If NV ate the lead from the fish, duck, coot, etc., it would have been digested in his stomach and then absorbed into his blood stream. On x-ray, we could see no trace of a lead object so it has either pasted in the feces or has been totally absorbed.

Q:  So how is the Center treating the lead?
A:  At this time NV is doing VERY well and the lead although present, is likely too low to have any long-term effects. We have not seen any clinical signs. We will, however, perform another blood draw tomorrow [May 3] so that we can monitor his lead levels. At that time, we expect that the reading will either be the same, since not much time as really elapsed since the first blood draw, or the reading will be lower if it has been taken up into the bones where it will cease to be a problem. If, on the other hand, the lead levels are further elevated, we will begin to remove the lead through the administration of drugs – a process called chelation.

Q:  Is the lead the reason this eaglet is so much quieter than his sisters?
A:  It’s unlikely, though it is possible.

Q:  What would the clinical signs look like?
A:  Although measurable in NV, the lead concentrations were not high enough to create clinical signs. In eagles, lead typically affects the nervous system and the gastrointestinal system although eyesight and the respiratory system may also be affected.

Q:  How common is it to find lead levels in eagles?
A:   During the first 6 months of the study, 49% of the eagles admitted from participating rehab centers, like NV, were subclinical for lead (measurable amounts in the blood but no clinical signs) , 13% were showing clinical signs of lead toxicity, and 8-9% of the cases were still pending. The remainder had normal values.