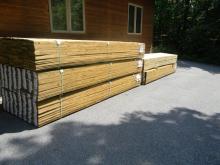 On May 27, NV’s outside lab results came in, showing that his most recent lead levels were 0.11 ppm – higher than the reading on the WCV’s in-house lead testing machine. The two machines use different technology to measure blood lead levels. While the Center’s in-house  machine is excellent at measuring trends and lead-level ranges, the more expensive dedicated lab machine is better able to pinpoint lead levels.

Because NV’s lead levels persist, the veterinary team has decided to start a short round of chelation therapy. While the lead levels detected  in NV are actually below the levels at which the veterinarians would normally start treatment, we will treat NV to assist his body in eliminating the lead. This will ensure that we are giving him the best chance to develop and thrive normally.

During the treatment, veterinarians will inject a CaEDTA solution under the skin on NV’s upper thigh. This “chelator” will bind to the lead to take it out of the blood – essentially “scrubbing” the blood clean. The medication needs to be administered twice a day, and the course of treatment will last three days. After the treatment is completed, another lead test will be performed and the blood will be analyzed both in-house and at the outside lab.

Treatment will start tomorrow – Tuesday, May 31. Because the team will need to catch NV to treat him, they will be doing the weekly Tuesday weigh-in at the morning treatment time, which will roughly be between 9:00 a.m. to 9:30 a.m.

In other news, lumber for the flight pen renovations arrived today. Sometime within the next two or three days, a crew will be at the Wildlife Center to haul the lumber up to the flight enclosure. We should know more information tomorrow about the schedule for the rest of the week.

However, here’s the word of warning:  when work is being done on the flight enclosures, the eaglets will be moved for the day to a different outdoor enclosure at the WCV. This means that if the crew is able to come tomorrow, the birds will be caught up at 8:00 a.m. and moved.  The birds would then be moved back into the enclosure in the late afternoon, when NV's second treatment is administered.

We’ll do our best to keep everyone informed of the schedule of events, but please bear with us!