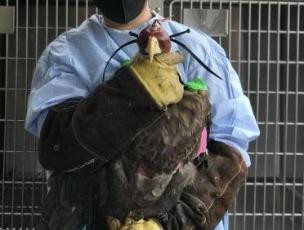 On October 27, an adult Bald Eagle was found injured on the side of the road in Chesapeake, Virginia. The eagle was likely injured due to a vehicle collision. Chesapeake Animal Services captured the bird and brought it to permitted wildlife rehabilitator Lisa Barlow for initial treatment before transporting it to the Wildlife Center for further care.

On admission, the eagle was bright and alert. Dr. Marit, one of the Center's veterinary interns, examined the bird and found  a corneal ulcer in its left eye and a large necrotic wound near the elbow on its left wing. Radiographs did not show any fractures, but bloodwork revealed that the eagle had 0.184ppm lead in its system, a subclinical level of lead toxicosis. It's possible that the eagle's lead toxicosis caused it to become uncoordinated, predisposing it to being hit by a vehicle.

Dr. Marit  cleaned and bandaged the wound on the eagle's wing and started it on a course of antibiotics to combat infection and anti-inflammatory medication to relieve swelling and reduce pain. She also started chelation therapy to remove the lead from the bird's system. After the exam, the eagle was placed in the Center's indoor Hold where it could be easily accessed for treatment and closely monitored.

The following day, the veterinary team anesthetized the eagle to surgically remove the dead tissue from the wound on its left wing. The surgery went well, and after, a specialized bandage was placed over the wound to aid in the healing process.

Despite being on two types of antibiotics, the wound on the eagle's left wing quickly became infected. On October 31, staff had to perform a second surgery to debride more necrotic tissue, allowing the healthy underlying tissue a better chance to heal. Before suturing the wound, the vet team placed antibiotic beads into the wound to deliver a high concentration of antibiotics to the area and stave off infection. The eagle had also not been eating well, so staff began gavaging the bird to ensure it was getting the proper nutrition during recovery.

On the morning of November 2, the eagle was found laying on its side and was very dull. Center staff quickly moved the bird to an oxygen therapy cage and placed a catheter to administer IV fluids. The eagle's condition slowly improved, and by the end of the week, the bird was able to move off oxygen support and back into a crate in Hold.

During the next two weeks, the eagle's wound started to heal, though there is still some necrotic tissue in the wound. A lead test revealed that chelation therapy has successfully removed the lead from the bird's system. On November 19, the vet team moved the bird to Metals, an outdoor holding area. Though the eagle is still being confined to a crate while in Metals, this location will start acclimating the bird to being outdoors again and help reduce the stress of captivity.

For now, the eagle will remain in Metals where the vet team will continue to treat the wound on its wing; the eagle's prognosis remains guarded.

Your donation will help provide veterinary care to this injured Bald Eagle ... and more than 3,700 other wild animals at the Center this year. Thank you!

During the past two months, Bald Eagle #22-3464 has remained in Metals while receiving medical and rehabilitative care. On November 22, veterinary intern Dr. Olivia performed an additional surgery to further debride the wound on the eagle’s left wing. After removing dead and necrotic tissue from the injury site, Dr. Olivia was pleased to see healthy, bleeding tissue exposed. The area was flushed with a diluted iodine solution, and antibiotics were applied directly onto the exposed tissue before the veterinary team sutured the wound. Following the procedure, the eagle was placed in the Center’s indoor Hold area for a period of recovery before being transitioned outdoors again.

While in Hold, veterinary staff began a daily physical therapy regimen on the eagle’s wing through gentle range-of-motion exercises. During this time a repeat ophthalmological exam was performed on the bird’s left eye, showing improvements in the corneal ulcer that was noted on admission.

Unfortunately, the wound on the eagle’s left wing has proved difficult for the veterinary staff to fully resolve. Additional surgeries to debride, clean, and close the affected area were performed on December 23 and January 5. For now, the eagle will remain in Metals where Center staff will administer pain medications and anti-inflammatories, perform daily bandage changes, clean and flush its wound as needed, and closely observe the eagle’s overall status.