Lead poisoning is a significant – and preventable – health issue for Bald Eagles and other birds of prey.

Lead toxicosis is a significant cause of admission for Bald Eagles at the Wildlife Center of Virginia. Each year, dozens of eagles are admitted with lead toxicity; vultures also often have significant levels of lead in their bloodstream. Occasionally, other birds of prey such as owls and hawks are admitted with lead toxicity. Few birds with high levels of lead make a complete recovery.

How Do Raptors Get Lead Poisoning?

Eagles and other avian scavengers are getting the lead primarily by scavenging the carcasses or remains of animals left in the field by hunters. When shot with lead ammunition, game animals can contain very small pieces of lead, which fragment upon impact with the target. Learn more about how eagles and other birds are exposed to lead.

Lead Poisoning in Raptors at the Wildlife Center

The Wildlife Center of Virginia has tested the blood lead levels of over 360 Bald Eagles who were admitted as patients in the past 10 years. Of those, 271, almost 3 out of 4, have had measurable levels of lead in their blood. The only safe level is 0. Of those we’ve tested, 26% have had lead levels that are considered “elevated.” The survival rate of the Bald Eagles we’ve treated with elevated levels is 5%.

Eagles are not the only animals affected. Other raptors (various species of hawks and owls) also test positive for lead in their system. Of the 337 other raptors we’ve tested for lead in the past 10 years, 1 in 3 had measurable levels of lead exposure. Learn more about lead poisoning and treatment.

Lead toxicois is a significant issue, but could be relatively easy to solve through education and voluntary compliance with safety procedures by hunters. Learn more about how to help with this important issue.

The threat of lead poisoning of eagles and other birds of prey can be almost entirely eliminated if hunters will voluntarily switch to non-lead ammunition for hunting, thus eliminating the primary source of lead affecting eagles and other scavengers. Learn more about lead alternatives that many hunters now prefer.

Q: Can’t we just ban all lead bullets and shot?
A: The challenge is not to find a way to ban the use of all lead – it is to find a way to reduce the amount of toxic lead fragments available to non-target wildlife and to do it without unreasonably affecting those whose activities are otherwise legal and acceptable to the public. Most lead-based firearms ammunition is used for national defense and public safety – by the military and police agencies. Target and competitive shooters, and those who own firearms for self-defense, consume the majority of munitions purchased by the private sector. Hunters use only a small percentage of all ammunition sold in the United States each year. A ban on all lead-based ammo would deal a serious blow to national security and public safety, and would hurt a lot of law-abiding firearms users, who are not contributing to the problem of lead-poisoned wildlife!

Q: What about the recent ban on hunting big game with lead in California – what about THAT kind of ban? Why shouldn’t we ban lead for hunting?
A: The original concern about hunting with lead in California stemmed from a number of endangered California Condors that died from lead poisoning.  Initially, the ban was put in place only in the specific areas to which the condors had been reintroduced.   Eventually, the ban was extended statewide, for implementation in 2019.    Unfortunately, this ban came about in such a way that hunters felt steam-rolled in the process.  Recent surveys suggested that little effort was made to inform and educate hunters or involve them with the conservation effort related to condors.   As a result, there are some very hard feelings on the part of the hunting and shooting public—hard feelings that may well have been avoided if a more collaborative approach had been tried.   The political reality is that most states have a far more powerful hunting community than does California.  In states like Virginia, the right to hunt and fish is actually in the state constitution, so enacting ammunition bans, over the objections of the hunting and shooting public, will not be easily done.  This is why the Wildlife Center of Virginia advocates information and education as the first steps toward eliminating this preventable threat.

Q: I have heard that some groups claim that eagles are getting the lead from sources other than bullets. Is this true?
A: There is a lot of published misinformation on this issue. One writer for the National Shooting Sports Foundation implied that condors, vultures, and eagles were getting lead poisoning from sources like discarded car batteries! While people and animals may have some exposure to lead from contaminated water, paint, or other similar sources, the levels of lead being detected in eagles and other scavengers are far too high to be associated with trace amounts of lead in the environment.  Multiple studies comparing isotopic compositions of lead found in the bloodstream of Bald Eagles and other scavengers with the lead used in ammunition have confirmed that lead from spent ammunition is the source of this toxicity.

While we’ve never found pieces of a car battery on raptor radiographs, our veterinary team has found many instances of tiny lead fragments in the gastrointestinal tracts of poisoned birds. 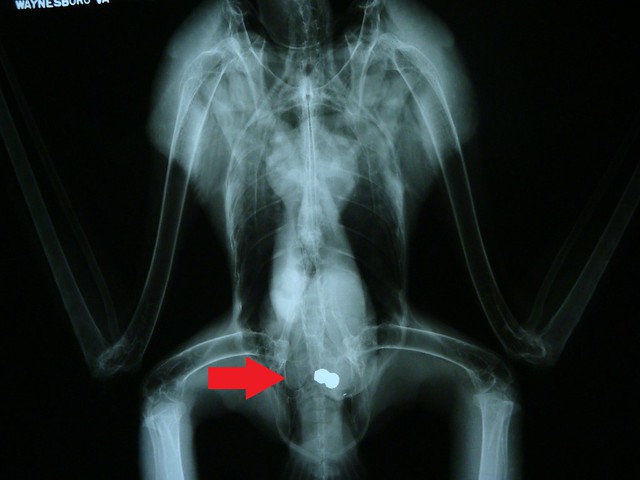 Q: If a hunter shoots a deer, doesn’t the bullet just pass through the body of the quarry, eliminating any danger of residual lead?
A: Many hunters using rifles or pistols assume that the presence of an entry wound and an exit wound indicates that the bullet or other projectile has passed through the target animal and is gone. However, in nearly every case, bullets will fragment or break apart, especially if they hit something hard, like a bone. Hunting bullets leave behind as much as a third of the original bullet mass in the muscles or internal organs of the target animal, even when the largest part of the bullet passes through. Since most of these fragments are very small, their potential significance is easily overlooked by hunters. Only recently has it been shown that these tiny fragments of lead can be toxic if ingested by scavenging or predatory birds.

Q: Don’t lead sinkers and fishing lures poison birds as well?
A: Yes, there are areas where birds like loons and swans suffer a high incidence of lead poisoning from ingesting lead sinkers that have been broken off of fishing tackle. While this problem is not one frequently seen by the Wildlife Center of Virginia, additional information can be found from several other sources, including EPA.

Q: Wasn’t lead ammunition for hunting banned in the ‘90s?
A: Only in waterfowl.  Millions of ducks and geese were dying of lead poisoning after they ingested bits of lead they found while filter-feeding on the bottoms of wetlands, marshes, shallow estuaries, or other bodies of water. The lead fragments the birds ingested were mainly shotgun pellets that had missed their primary target and rained down over the water. The birds would deliberately pick up this shot and swallow it, thinking it to be food or grit they need for digestion. After years of debate, the federal government finally enacted a ban on the use of lead shot for most waterfowl hunting. Studies indicate that the ban was successful and significantly reduced mortality in waterfowl.  The use of lead and lead-based projectiles for hunting of so-called upland species of game [e.g., quail and pheasants] and nuisance wildlife has remained legal, presumably on the logic that spent shot which falls upon the land is very unlikely to be found and ingested by wildlife.

Q: Why don’t we just ban all hunting?  That would take care if it!
A:  For many people who don’t like hunting, this seems like an easy answer; but the truth is, it’s not that easy.  Hunting is not as popular as it once was in the United States, as a greater percentage of our population has gravitated to urban and suburban locations, but it is still an extremely popular pastime in the United States.  In some states, like Virginia, hunting and fishing are rights guaranteed in the state constitution.  And, to some extent, a hunting ban would be like banning driving as a way to reduce traffic accidents—not a proportional response.  In truth, many of the leaders of the movement to eliminate lead from hunting ammunition are themselves, hunters.  They are often the most effective messengers for information about lead toxicity.  Conversely, someone who openly opposes all hunting is NOT the right person to try and educate or inform the hunting public about this issue.  It may make you feel good to rant about hunters and declare, “Just shoot the hunters!” but that is actually extremely counterproductive.  The issue is about the availability of lead to scavengers, not about whether or not hunting is a good thing.