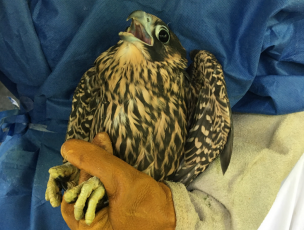 On June 19, a banded Peregrine Falcon fledgling was found grounded on the James River Bridge in Newport News, Virginia. The falcon was unable to fly and was taken to permitted wildlife rehabilitator Dana Lusher. After several days in Dana's care, the bird was transferred to the Wildlife Center of Virginia.

On admission, the falcon was alert and responsive. After giving the bird some time to rest in the hospital's waiting room, the veterinary team examined the falcon but did not find any injuries other than mild pododermatitis on the bird's left foot. Radiographs and blood work both came back within normal limits. The veterinary team suspects that the falcon is uninjured and is simply a young bird that is not yet coordinated at flying. They started the falcon on anti-inflammatory medication to help alleviate its pododermatitis, and then placed the bird in an outdoor holding area where it will remain in a crate until it is ready to transition to a flight pen. Peregrine Falcons are typically a high-stress species that can have a difficult time adjusting to rehabilitative care, so this outdoor area will help limit the bird's stress.

After the exam, Center staff contacted biologists from the Department of Wildlife Resources (DWR) to report the falcon's band number and learn more about the bird's background. Staff were informed that the falcon was banded on June 7 and fledged from a nest located on the James River Bridge. The bird likely fledged from its nest the week days before it was found, further supporting the notion that it is a young bird still learning how to fly.

So far, the falcon has been eating well and the pododermatitis on its left foot has improved. A recent flight test showed that the bird could fly but with limited coordination. A fecal test also came back positive for coccidia, a type of intestinal parasite, so the veterinary team started the falcon on a course of anti-parasitic medication.

For now, the falcon will remain in a small enclosure outdoors while it finishes its course of medication.

Your donation will help provide veterinary medical care to this Peregrine Falcon ... and more than 3,800 other patients that the Wildlife Center will admit in 2022.

Throughout June and July, Peregrine Falcon #22-1909 continued to show signs of recovery. On July 5, the falcon had completed its course of anti-parasitic medication, and a subsequent fecal test showed that the medication successfully cleared the parasites from its system. Two days later, the falcon was moved to one of the Center's C-pens -- outdoor enclosures where raptors may spend time acclimating before transitioning to a larger flight pen. During this time, the rehabilitation team kept a close eye on the falcon's feet to monitor for bumblefoot but did not see any worsening signs.

On August 8, the rehabilitation team determined that the falcon was prepared to begin flight conditioning and moved the bird to a large flight pen. Initially, Center staff planned to exercise the bird and continue providing supportive care until its potential release. After conferring with staff at the Blue Ridge Wildlife Center, the decision was made to transfer this falcon and Peregrine Falcon #22-1633 into the care of their permitted veterinary and rehabilitation staff. A specialized, circular flight pen will serve as an excellent environment for these birds to practice flying, rebuild their strength and stamina, and prepare for life in the wild. On August 13, Blue Ridge Wildlife Center staff shared a short video of one of these falcons entering the specialized enclosure on social media:

Our friends at @WCVtweets recently transferred 2 juvenile Peregrine Falcons that needed flight conditioning. With our large circular flight cage that allows continuous flight, we were happy to partner up & help! pic.twitter.com/eafRjtm1WV

Both falcons will remain at the Blue Ridge Wildlife Center and receive supportive care and flight conditioning exercises until they are ready for their return to the wild.