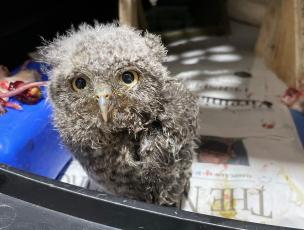 On May 10, a young Eastern Screech-Owl fledgling from Lexington, Virginia, was admitted to the Wildlife Center. A homeowner found the young bird in a bush but noted that the owl did not look very healthy; the homeowner was able to capture and transport the bird to the Center.

Dr. Jenn, one of the Center's veterinary interns, examined the young bird when it arrived. The owl was alert but quiet. Dr. Jenn carefully examined the tiny owl and found that the bird had several bruises, as well as some matted feathers on its body. She found a couple of small lacerations and pinpoint puncture wounds that were actively bleeding; Dr. Jenn was able to clean the wounds and applied slight pressure to the injuries, though the bleeding persisted. This prolonged bleeding and inability to clot, called coagulopathy, can suggest rodenticide poisoning when seen in raptors.

Sadly, raptors that eat poisoned rodents are also affected by the toxic compounds in rodenticides; both target animals (rodents) and those who eat rodents will develop an inability to clot blood, which leads to a severe amount of internal bleeding, and ultimately, death. In this owl's case, it's likely that the bird only ingested a small amount of the rodenticide; in the days following admission, the owl remained quiet and alert and slowly started to show signs of improvement.

On May 13, the veterinary team noted that the young bird was not fully standing on its right leg; initial radiographs did not show any fractures, though it's likely that the owl may have suffered soft tissue trauma when it fell from the nest. The team is carefully monitoring the young screech-owl and offering a diet of chopped mice one time a day.

Your donation will help provide veterinary medical care to this young owl ... and more than 3,500 patients that the Center will admit in 2021.

During the past month, Eastern Screech-Owl #21-1102 has been receiving regular exercising sessions with the rehabilitation staff in an outdoor flight pen. Initial exercise routines showed promising signs of the owl regaining physical stamina and proper form during flight, but during the past few weeks wildlife rehabilitator Kelsey reports that the bird may have reached a plateau. The owl resists flying during daily checks, and is unable to complete the prescribed number of passes within the enclosure. Veterinary staff suspect the rodenticide poisoning the owl was suffering from upon admission may have had a permanent effect on the bird’s physical capabilities. For now, the owl will remain under close observation during the coming weeks to assess the possibility of a full recovery and release.

Eastern Screech-Owl #21-1102 has been doing well this summer. In mid-June, the young owl, along with several other screech-owlets, started a formal exercise program in preparation for release. The young bird has been reluctant to fly, though the rehabilitation staff have coaxed the bird into flying in a large space, and the bird has shown signs of making good improvements with lift and maneuvering as he developed his flight muscles. At this point, the owlet has great stamina and the staff are assessing the silence of his flight to ensure he can be successfully released later this summer.

Eastern Screech-Owl #21-1102 has been doing well in one of the Center's B-pens, along with three other owlets. The group of young owls has been eating well, growing, and practicing short flights around the enclosure. A recent feather assessment confirmed that #21-1102 has many flight feathers growing in; once these are fully grown, the rehabilitation staff will begin a daily exercise regimen to get the owlet's flight muscles in good condition. The owlet will also need to be separated from its introduced siblings for a final "mouse school" prior to release; this opportunity to practice hunting live prey is an essential part of rehabilitation for young orphaned or injured raptors to ensure they can successfully survive in the wild.

Eastern Screech-Owl #21-1102 has been healing well during the past two weeks. The bird is eating well and gaining weight; the owlet is now 134 grams -- much larger than the bird's admission weight of 82 grams! The veterinary staff have seen no lingering effects of the suspected rodenticide poisoning. The bird has been living with several other young screech-owls in the Center's care, including lead-poisoned owlet #21-0509. The owlets will likely move to an outdoor enclosure in the next few days.

Eastern Screech-Owl #21-1102 has been doing well during the past week; the owl is able to use both legs and has had no additional signs of bleeding due to the suspected rodenticide toxicity. The veterinary team scheduled the owlet for blood work on May 19; while a complete blood count, lead test, and other diagnostics are typically performed at admission, the staff did not want to draw blood until they were entirely sure that the owlet's clotting issue had resolved. Dr. Karra reported that the blood draw went well, and there were no signs of clotting issues.