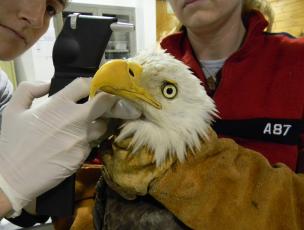 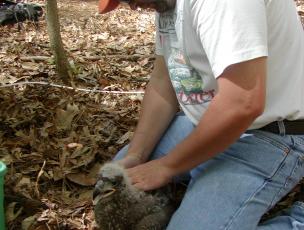 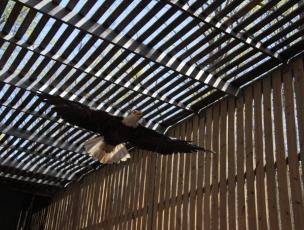 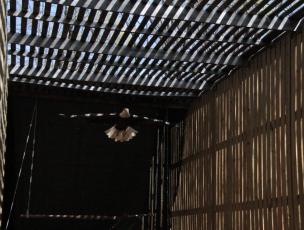 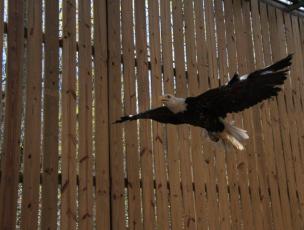 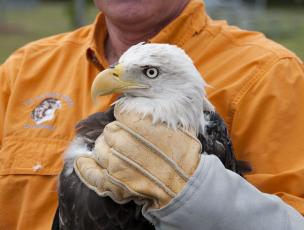 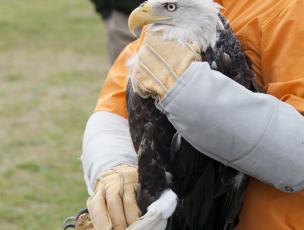 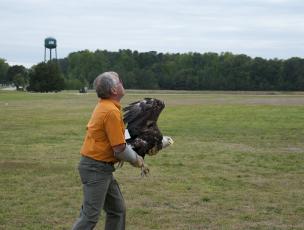 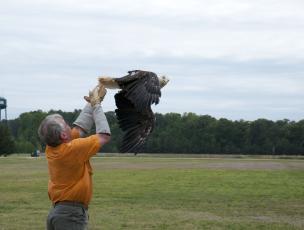 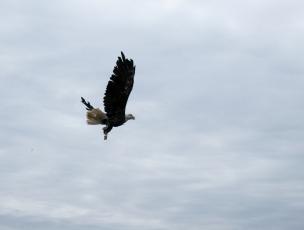 PATIENT:  Bald Eagle, #11-0136 LOCATION OF RESCUE:  Camp Peary, York County INJURY:   Swollen right elbow ADMISSION DATE:  March 9, 2011 OUTCOME:  Released April 30, 2012 On March 9, 2011, an adult Bald Eagle was found near Camp Peary in York County.  The eagle was unable to fly.  DGIF Executive Director Bob Duncan picked up the bird and transported it to Richmond; DGIF biologist Al Bourgeois transported the eagle the rest of the way to the Wildlife Center. Upon admission, the bird was bright and alert -- and feisty.  Dr. Kelly Flaminio examined the eagle and found a bruised and swollen right elbow.  There were no other significant findings; the eagle tested negative for lead.  Dr. Kelly gave the Bald Eagle anti-inflammatories and fluids. On March 10, radiographs and additional blood work were taken.  No fractures were found; the eagle will remain housed indoor for the next few days while its swollen elbow begins to heal.  Because this injury doesn't appear to be serious at the moment, the team is hopeful that this bird will make a full recovery. The Bald Eagle arrived with a band around its leg -- after a quick check with the Center for Conservation Biology, WCV staff determined that the eagle was banded at Kingsmill in James City County in April 2002.

Officials at the Center for Conservation Biology report that based off of blood work (performed at the time of this bird's banding), this nine-year-old eagle is a male.

Bald Eagle #11-0136 was moved outside into small flight enclosure on Sunday, March 13.  When Dr. Kelly observed the bird in this larger space, she noted that it had a significant left wing droop, despite the fact that no injuries were noted on that wing.  The eagle also appears to be sitting on the lower perches rather than attempting to make its way up to the higher perches in the enclosure.  The team will continue to carefully monitor the eagle while the bird continues to receive anti-inflammatory medications.

For the past two weeks, the Center’s veterinary team have been carefully monitoring Bald Eagle #11-0136.  The bird’s left-wing droop [cause unidentified] has continued without any improvement.  Because of the way the eagle has been drooping the wing, a wound has developed on the carpus (wrist).  On March 29, the eagle was moved back inside. A body wrap was placed on the Bald Eagle to assist the bird with holding the wing in a proper position.  The eagle is receiving antibiotics for the carpal wound, as well as additional medication to improve circulation in that wing.  This treatment will continue for at least a week.

Bald Eagle #11-0136's body wrap was removed after a week and a half; unfortunately the eagle managed to re-injure his carpus within a day of the bandage removal.  The wound was cleaned and monitored for several days.  On April 9, the veterinary team decided to move this bird to an outdoor flight pen to prevent further injury, as well as to assess the presence of the wing droop.  The eagle is still favoring its left wing, though it is able to fly to the high perches in its enclosure.  The eagle does not seem to want to fly the full length of the flight pen, which makes it hard to assess its wing extension.  The eagle will remain in the 100 foot-long flight pen for the next couple of weeks while monitoring continues.

Bald Eagle #11-0136 continues to live in one of the Center's longest flight pens.  This bird is actually on the other side of the solid wall from the Norfolk Botanical Garden eaglets, though they can't see this eagle. Everyday, the rehabilitation staff exercise the Bald Eagle -- though this bird's flight is a little tricky to assess.  Rather than flying the full length of the flight pen -- which would allow the staff to monitor the eagle's altitude, stamina, and quality of flight -- the eagle often makes smaller partial flights down the length of the pen before veering towards one of the walls of the enclosure.  An average exercise session is typically about six to seven lengths of the flight pen before the bird becomes tired.   Bald Eagle #11-0136 continues to favor its left wing.  Anti-inflammatories have been provided in the eagle's food; this will be discontinued starting today, so the veterinary team can determine if there are any changes in how the bird moves and holds its wing.

No difference has been observed in the past couple of weeks on Bald Eagle #11-0136's flight.  While the bird can fly, it just can't fly well -- the eagle often tires after a few flights and also continues to droop its left wing.   The eagle has been moved to a slightly smaller flight pen so that the large "A-pen" enclosure can be prepared for the Norfolk Botanical Garden eaglets next week.

Over the course of this summer, Bald Eagle #11-0136 has been housed in several different flight pens at the Wildlife Center.  Because this bird wasn’t flying well at the end of May, and the Wildlife Center treated many young Bald Eagle patients this summer, eagle #11-0136 spent most of the season in one of the outdoor intermediate-sized enclosures. On August 23, the Bald Eagle was moved into A-2, one of the Center's largest flight pens.  The eagle did not fly all that well when first placed in the pen, though the staff will be monitoring how the bird adjusts as it builds up flight muscles and gets used to the larger space.

After carefully observing Bald Eagle #11-0136 in the Center's largest flight pen, the veterinary team did not see any signs of improvement in this bird's flight.  While the bird can fly, it can't fly well -- and often curves to the left in its flights.  With such a prolonged rehabilitation and no signs of improvement, the vets have deemed this eagle non-releasable.  Placement options will be reviewed.

In late 2011, Bald Eagle #11-0136 made some slight improvements with its flight capabilities.  The veterinary team decided to give this bird more time in a flight pen before seeking placement options.  As of mid-February, the eagle is residing in A3 -- one of the Center's largest flight pens.  Over the next few weeks, the eagle will be pushed so that the staff can determine if this bird may have a chance in the wild, or if an educational placement option is needed.

Exercise has continued over the past month for Bald Eagle #11-0136.  This bird is proving to be tricky to evaluate -- the quality of the eagle's flight has shown signs of marked improvement since the fall of 2011, though the bird is still lacking the stamina needed for release.  The eagle also generally seems a little more prone to over-shooting perches in its enclosure and flying to the wall -- fortunately there is black netting hanging on either end of the Center's A-pens to help cushion the bird's rapid flight.  Exercise and assessment will continue over the coming weeks.  The eagle is currently being housed in A2 and is flying the length of the enclosure an average of 8-12 times per session.

Bald Eagle #11-0136 is currently living in A1 -- one of the Center's longest flight pens.  Daily exercise continues; this Bald Eagle is proving to be very difficult to evaluate.  The eagle is flying the length of the 100'-foot enclosure, though at times the bird's flight is labored.  Basically, the eagle has been flying almost well enough for release ... but is still not quite as well-flighted as the veterinary staff would like.   The Bald Eagle is also quick to fly away from people -- which often leads the bird to overshoot perches and hit the protective black netting hung on each end of the flight pen.  For this reason, the veterinary staff have kept protective carpal ["wrist"] bumpers on the eagle to avoid injury.  Recently, however, the rehabilitation staff have started to suspect that the wrist bumpers may be slightly hindering the eagle's ability to fly -- so the veterinary team removed them on Monday, April 2, for a few days of observation. This Bald Eagle has been a challenging patient  for the entire vet staff -- but the team hopes to see some improvements over the coming weeks, or at least some observations that will help the team make a decision as to whether or not the bird is releasable.

Bald Eagle #11-0136 has shown marked improvements over the past two weeks without the protective carpal bumpers.  The staff need to be cautious when entering the pen, as the eagle is stressed by the presence of humans and often flies from perch to perch, but so far everyone is pleased with what they are seeing in terms of the bird's flight capabilities.

Bald Eagle #11-0136 gained a new roommate today -- Bald Eagle NX!  Both birds seem to be getting along well.

Bald Eagle #11-0136 was caught up today for a foot and feather check, as well as a weigh-in and routine blood work.  Several of the eagle's feathers are "in blood" -- meaning they are growing in, likely during his annual molt.  Several feathers still remain tattered, though these don't appear to be impeding the bird's ability to fly.  Finally, after months of assessment and monitoring, the rehabilitation staff are pleased with how this bird is flying.  Bald Eagle #11-0136 typically averages about 12-15 lengths of the flight pen during exercise sessions. The male Bald Eagle currently weighs 3.26 kgs.

After 418 days of treatment at the Wildlife Center, #11-0136 has been cleared for release.  The bird will be taken back near to the spot of its original rescue, for release by Center President Ed Clark.  This site is a restricted area and is not open to the public.  Any photos taken will be posted as they are available.

Wildlife Center President Ed Clark reports that the release of Bald Eagle #11-0136 went well on April 30.  After the bird was released, it flew up into a tree to gather its surroundings, before later flying off.  The Wildlife Center hopes to be able to share some release photographs taken by a Camp Peary photographer.  We do have several pre-release photos of this bird to share, as well as Ed's report of the release as shared on the Wildlife Center's moderated discussion on the night of April 30. Release photos property of the Camp Peary Media Affairs Office:   At the Wildlife Center, we treat to release.  Your donation will help celebrate the Center’s life-saving work with this Bald Eagle … and help provide care to 2000+ wild animals in need.