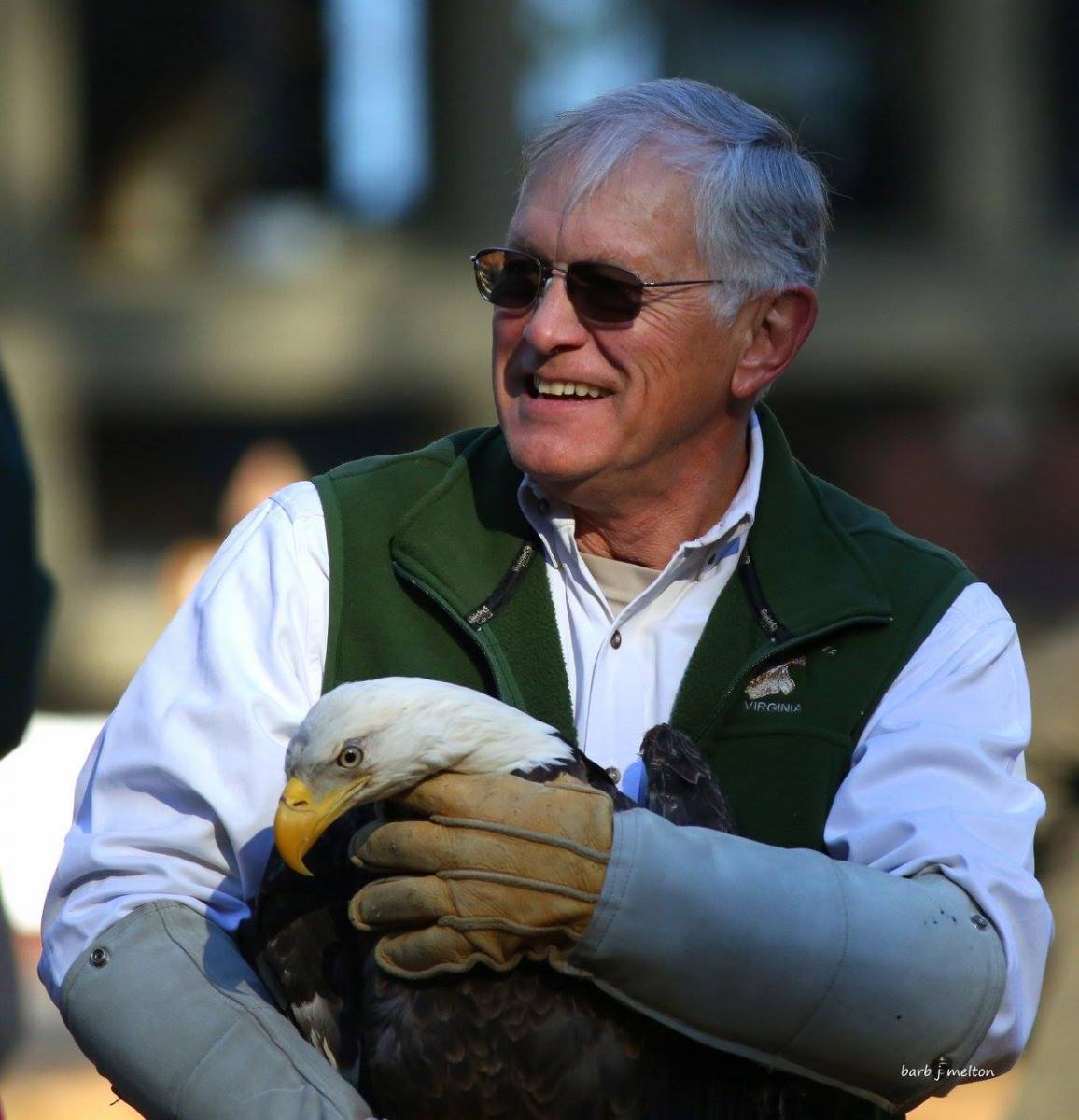 Ed Clark is president and co-founder of the Wildlife Center of Virginia. Since the late 1970s, Ed Clark has been a national leader in the field of conservation. His involvement has ranged from wilderness designation and public land management to pesticide regulation and endangered species protection.

I love doing television.  Untamed is actually the fourth TV series I have hosted, and the third for PBS.  I had two back in the 1990s -- Virginia Outdoors and Wednesdays Untamed.    Both of the earlier shows were focused on nature and the outdoors, as is our current series.  Hosting our new series has been better, however, because I can actually dive into the subject matter we are addressing and convey much more information.  My approach to the series has been to have a conversation with our audience, speaking to the viewers as if they were right there in the room with me.  That worked in the past, and, based on the feedback I have gotten from the new series, is still working.  I am just sharing information with people who have chosen to participate.  I love doing that.

What’s been your favorite episode this season?

That is a tough one, because there are things I like about each episode and things I would change.   I guess I would have to include the episode about bats as one of possibly my favorite because I learned so much from one of our guests on the program, Leslie Sturges from The Save Lucy Campaign.  I never knew a lot of the stuff Leslie shared with our viewers, so I was learning right along with everyone else.

Can you tell us more about RT, one of the first patients treated at the Center in 1982 and first education bird?

Of all the animals with which I have interacted over the last 36-plus years, none has influenced me more than RT, the very first Red-tailed Hawk we used for education programs.   I got interested in raptors through a good friend who was a falconer.  He flew a red-tail for hunting.  He invited me to come out with him one day, which was an incredible experience.  I got to “call down” the bird, from the tree in which it was perched to the glove.  Having that bird fly at me in a dive was at first very scary -- especially when she stuck her huge feet out in front of her to land -- I thought she would take my head off!  Then, at the last instant, she flared her wings and tail and landed on the glove a softly as a breeze.  That was it.  I was hooked. 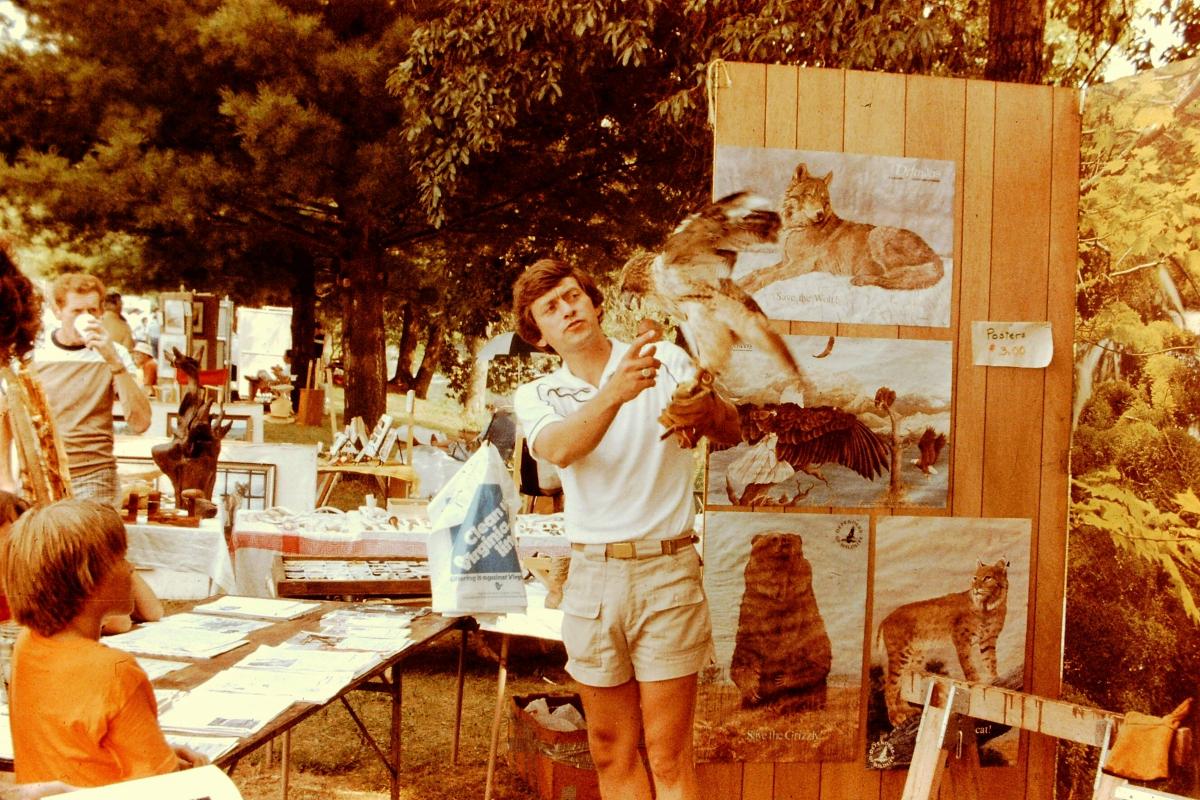 RT was one of our first five patients in our new rehab facility, which was located in a horse barn on the farm where I lived.  She had been at the Charlottesville SPCA for some time, due to a wing injury, but nobody seemed to know just how long.   She was clearly not releasable, so I asked my falconer friend to come help me learn how to handle her correctly and safely, for her and for me.    I have to say that I learned more from that beautiful bird than I ever taught her through the training.  Thanks to her, I became a competent handler of raptors, which has included more than a dozen species over the years, the largest of which was Bald and Golden Eagles.   RT lived at home with me for all of our ten years together, so I fed her and was with her almost every single day.   When she finally died, after more than a decade in my care, it was truly like losing a friend, but like a friend, her memory and her impact on me will last forever.  She was a beautiful and gentle bird who touched the hearts of tens of thousands of people.

What is one thing that you hope people take away from this television series?

If there is one message I would like us to drive home to our viewers, it is that every single person can make a positive difference for wildlife and the environment.  It might be in a big way or a small way, but all of us can do something.  From a decision as basic as not littering, to fundamentally changing the way you manage your yard or farm,  from simply keeping your cat indoors, to joining an advocacy organization that actively speaks on behalf of wild things and wild places -- every person can make things better.  If we motivate even a small percentage of our viewers to take even one small step, the cumulative impact will be significant.  I hope we can influence people to routinely think about the consequences of the little things they do on a daily basis.  A few seconds to consider how what you plan to do will impact wildlife and the natural world around us can change our footprint on the planet.

What’s your advice for someone who wants to work in the wildlife field?

I am frequently asked about how someone can “get my job”, or what they imagine to be their dream job working with wildlife.   As you are about to see, it is not a simple answer.

First, my actual job is a whole lot more diverse than just releasing eagles in front of adoring fans and being on TV, but my job truly is my dream job.  It is just that my dreams are not that simple.

So, to some extent, my advice to people who are looking for their dream job is to get to know your own dreams first!  Don’t try to put yourself into what you imagine to be someone else’s dream job.  Give real consideration to what gives you joy, and the things about which you are passionate in life—not just causes, but lifestyles, values, ethics, and activities.  Do you get more pleasure working with animals (are you an introvert), or do you love working and interacting with people (are you an extrovert)?   Or, do you want to work with people to teach them about animals?  All of these are valid answers, but each is very different in terms of what career paths may be open to you, what the real-world experience actually is in each of these options, and what skills are needed to get you into a position to live your dreams.  Other things are pretty basic as well ...   do you want to work indoors all day, or outdoors all day -- or some combination?   This seems like pretty obvious stuff, but it is critical to finding you joy in life and is essential to finding your dream job in the wildlife world.

My next questions are:  What are you really, really good at doing in life?   What are your natural abilities and skills?  It is always good to start there ... and be really honest with yourself.   I personally wanted to grow up and become John Denver.  Unfortunately, I cannot sing a note, and cannot carry a tune in a bucket!!  So, I had to ask myself, what was it about my fantasy that attracted me?  After giving it some serious thought, I figured out that it was not the music, it was John’s ability to touch people, motivate them, and influence the things about which they care.  That was what attracted me, and the part of the dream that still lives with me today.

So, spend some time at the mirror, not fantasizing, but honestly appraising your own skills.   Are you a detail-oriented planner and organizer, or are you a big-picture visionary whose imagination often gets you in trouble?  (I fall squarely in the latter category, by the way!)   I suggest to people that they study the subject matter they love the most — not necessarily biology, wildlife management, or environmental studies — get really good at their chosen field of academic endeavor, then find a way to apply their academic interests, personality type, and professional competence to help wildlife, NOT the other way around.  You can’t start with some arbitrary wildlife job, then work backward to change and remake yourself into what you think you need to be for that imaginary -- and usually unrealistic -- image of what you think you want to do.  You first need to figure out who you are, then figure out how that person can help wildlife.  You need to be happy in BOTH, helping wildlife and doing so in a way that brings you joy.

Personally, from a very young age, I loved being outdoors in nature when alone, but was also keenly interested in politics, government, and the law; so, in college, I attended a rural school that allowed me access to the countryside while I studied history and political science.  I had declared my intention of going to law school, but that really was not a well-considered plan.   While in college, I discovered that I really enjoyed my Spanish classes (probably as much because of the professors as because of the subject matter) so I got the equivalent of a minor in Spanish.   I loved school because my studies interested me, and I was basically getting grades to learn about stuff I would have learned about anyway.  The only class that I did not enjoy was Constitutional Law; I learned it, but I did not enjoy the memorization the class required. (Hint: THAT WAS CLUE!!)   When I graduated, I got accepted to law school, and confronted the reality of actually having to go.  I couldn’t do it!  Reading case law and memorizing legal principles just did not bring me joy; interacting with people did.  So, since I needed a job, and a teaching position at the Virginia School for the Deaf was the first I found,  I ended up teaching shop at the Virginia School for the Deaf.  (Why shop?  Because woodworking was my hobby and had been my job during summer break in college, and it was a way to get paid to spend all day doing what I would have been doing if I did not need a job!)  I also found that I was really good at teaching, so I started graduate school in Educational Administration, but got very active in the legal and regulatory aspects of helping handicapped people … my original love of politics and the law never left me.   Eventually, when my favorite camping spot on the national forest was clear-cut, my personal passion for nature, combined with my other interests to become a career path.   I quickly found myself in the leadership ranks of a number of all-volunteer conservation organizations, most focused on the protection of public lands and wildlife habitat.   Eventually, I got my first job as an Executive Director of a state conservation organization, where I came face-to-face with the reality that personal preferences and passions were not enough … I actually did need specific skills training in things like management, fundraising, conflict resolution, etc.  But, when I realized these were stepping stones along the way to my dreams, they were a joy as well.

So my advice to people wanting a dream job with wildlife …  turn the binoculars around and look inward.  Find out how you are, what you are really good at doing, and what subject matter interests you the most, and then figure out a way to build on that foundation to benefit wildlife.   I’m sure you can find the way.