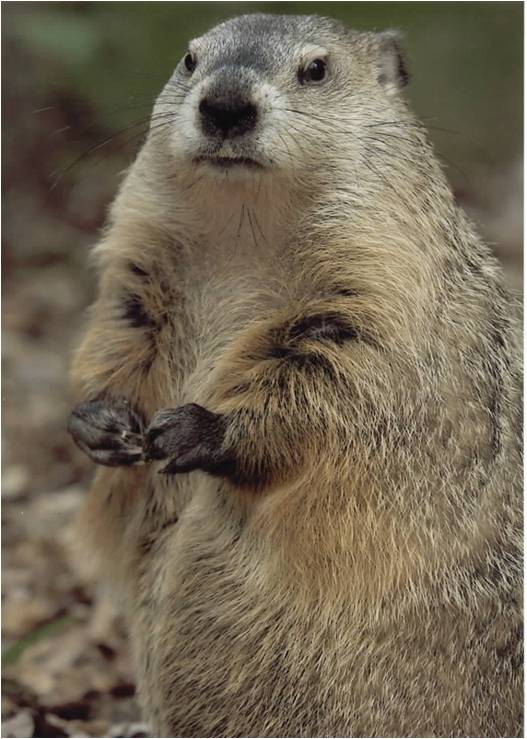 Woodchucks – commonly known as Groundhogs – can live in both urban and rural areas. They most often become “nuisance” neighbors when they start raiding gardens. Woodchucks are herbivores, and in addition to eating grasses, dandelion, and clover, they also enjoy fresh garden veggies and fruits.

Raiding the garden: First, make sure you’re identifying the correct culprit; woodchucks are active during the day, so nighttime raids of the garden are by a different culprit!

A simple way to deter woodchucks from the garden during the day is to hook a garden sprinkler to a motion detector; the woodchuck will likely be startled. They will likely keep testing, though, particularly if tempted by tasty veggies. Pinwheels, mylar strips, and other visual deterrents that move may help, but need to be changed and/or moved often so the woodchuck doesn’t get used to them.

A more permanent and effective fix involves fencing around the garden or flowerbeds. Woodchucks can both dig and climb, so fences should be woven wire with openings of three-inches or less and should extend down one foot into the ground. The top edge of the fence should be a little loose and unsupported so that if the animal climbs the fence, it will feel wobbly and unsteady, which will deter it from climbing over. You can also add a single strand of electric fencing four to five inches off the ground.

Den Openings: Woodchucks have elaborate burrows with multiple chambers. Dens have multiple entrances, and the openings are 10-12 inches diameter, although a woodchuck can fit in holes as small as three to four inches wide. Many other animals adopt abandoned woodchuck dens. Burrows can go five feet deep and can be up to 60 feet long; they are typically on slopes of 30 degrees or more, the exception being when woodchucks start a burrow under a building.

It can be impossible to get them to abandon an entire burrow system, but if certain den openings are problematic, you can work on encouraging them to stop using a particular entrance/exit.

To deter use of a particular hole, keep groundcover raked away, which will make the woodchucks feel more exposed. Use visual, audio, and scent deterrents around the openings, and remember to replenish the scent deterrents daily.

Please note: Woodchucks have one litter of four to six babies per year in April or May, which take about 10-12 weeks to grow up and become independent. Babies can be in a den as late as August. Don’t try to evict woodchucks during baby season; it’s almost impossible for a mother woodchuck to construct a new burrow for her babies after they have been born.

To tell if an entrance or burrow is being used between April-August, insert crumpled up newspaper in ALL entrances—of which there can be many. If no paper is pushed out after four or five days, you can assume no animal is using that entrance. Cover the entrance permanently by extending fencing or wood one-foot down under the ground.

The two least risky months of the year to permanently board up any woodchuck den are March and September. This reduces risk of trapping babies or hibernating adults in the den.

Scent, sight, and sound deterrents can be effective if applied regularly; if only done sporadically, their effect quickly wears off.

Visual: Woodchucks can be shy, so the goal of visual deterrents should be to startle woodchucks. Use something that moves, particularly anything that moves inconsistently, like silver mylar strips or beach balls.

Audio: Portable radios can be used in areas where you are trying to deter woodchucks; volume should be set loud enough to startle the animals, but not so loud that it startles your human neighbors!

Scent: There are a variety of commercial products available; some use other wildlife scents (fox) to scare away woodchucks. We cannot vouch that humane methods are used to acquire the fox scent ingredient. Generally, wildlife do not like the smell of urine of other animals in their area; you can place urine-soaked rags or cat litter soaked in urine near the entrances to dens; just remember to replenish daily. Ammonia-soaked rags can also be helpful, though rags should be placed in a plastic bag with holes, since direct exposure to the ammonia is not safe.

If you Find a Baby Woodchuck 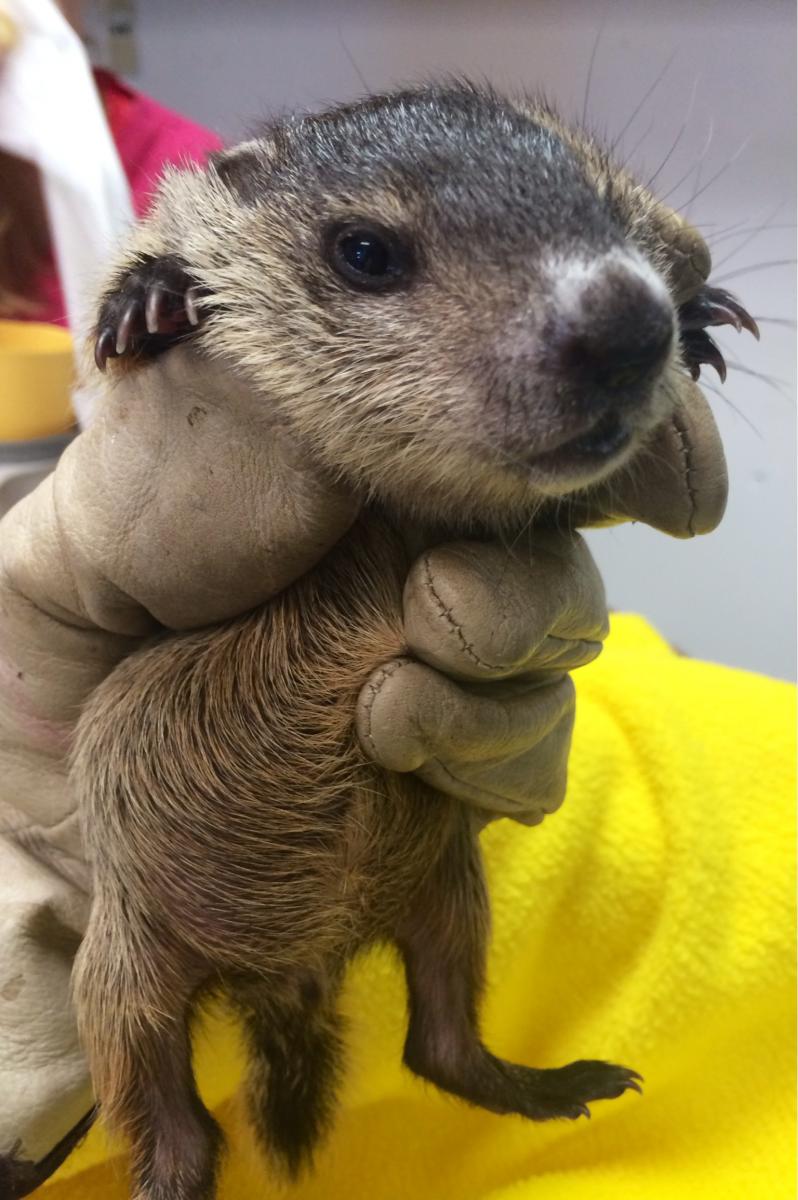 Babies do not emerge from the burrow until they are six weeks old and by then they are steady on their feet, 10” long in the body, and typically avoid people. If a found baby is uninjured and more than 10” in length, no intervention is needed.

Woodchucks are good mothers and may at times be seen moving babies, but they will not retrieve lost babies. Babies that are in need of a permitted wildlife rehabilitator include babies that are obviously injured, as well as baby woodchucks:

Adults have a powerful bite; even heavy leather gloves may not offer total protection. In most cases, it’s best to attempt to contain the injured woodchuck without directly picking up the animal. In the state of Virginia, woodchucks are considered a high-risk rabies species; as with most high-risk species, it’s impossible to know if the animal has rabies without a brain tissue test. Always exercise extreme caution. Click here for more information on helping sick and injured wildlife.

More Information on Living with Woodchucks

Humane Society of the United States: Wild Neighbors, What to do about Woodchucks.