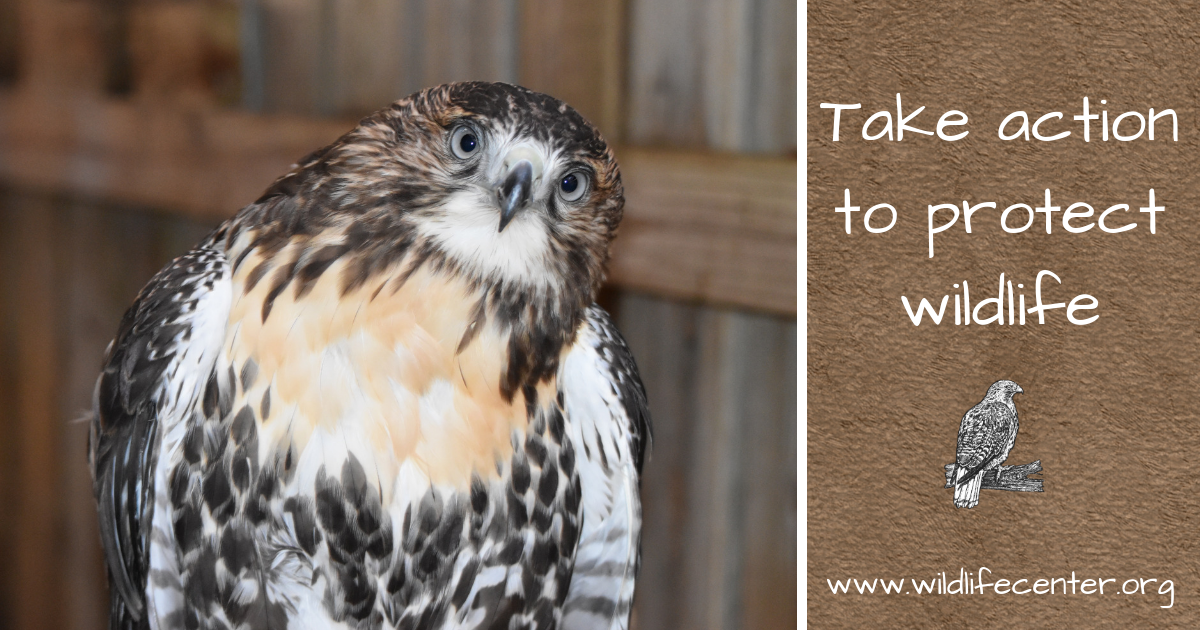 Wildlife face a variety of problems; most of the animals admitted each year to the Center are admitted due to human-related causes. Many of these issues are preventable if we choose to take action to protect wildlife.

Lead Toxicosis in Raptors
Lead intoxication is a significant cause of admission for Bald Eagles at the Wildlife Center of Virginia. Each year, dozens of eagles are admitted with lead toxicosis; vultures also often have significant levels of lead in their bloodstream.

The Case for Indoor Cats
While most of us love our kitties, free-roaming outdoor cats are a major threat to wildlife. These non-native predators kill billions of birds, small mammals, reptiles, and amphibians each year.

Keeping Your Windows Safe for Birds
Each year, the Wildlife Center admits a variety of songbirds and raptors that crash into windows. Birds that collide with windows and fall to the ground should receive medical attention after their collision.

Balloon Releases: What Goes Up, Will Come Down
All released balloons fall back to the earth as litter, even if they burst and fall in many fragments. Balloons travel with the wind and have been found hundreds of miles from their original release location.

Tips for Helping Turtles
In Virginia, turtles are on the move from spring through early fall. Many people encounter them crossing the roads or in their own backyards. Learn more about how to best help turtles, including when to call for help, and when to leave a wild turtle alone!

The Dangers of Glue Traps
Each year, countless animals are unintentionally caught in glue traps or “glue boards”. Glue traps are typically sheets or tubes covered in an extremely sticky glue; the traps are traditionally meant to capture flying insects, like wasps or flies (when hung up high) or rodents (when placed on the ground).

The Problem with Feeding Ducks
What many people don't realize is that bread, rolls, chips, and other human "snack food" items do not offer the proper nutrition that ducks and geese need -- and that the act of feeding a diet heavy in breads and other empty carbohydrates can lead to severe health consequences and a variety of other problems.

Fishing Tackle: Threats to Wildlife
The Wildlife Center of Virginia has admitted dozens of wildlife patients who have sustained injuries due to entrapment in, or ingestion of, fishing tackle. The most frequently admitted species in these cases are waterfowl, turtles, and raptors who hunt near water.