Many people have a deep-rooted phobia of snakes; our cultural traditions and stories often set up snakes as the “bad guys”, and this fear is reinforced in children. Snakes, however, are some of the most harmless and misunderstood wildlife and are important members of our ecosystem as both predator and prey. Few snakes are aggressive by nature; noted herpetologist Clifford H. Pope reminds us that “snakes are first cowards, then bluffers, and last of all warriors.” Most snakes want to avoid something as large as a human, and would prefer to get well out of our way!

Many snakes prey on small rodents, which make them great neighbors to have. However, if you’re uneasy around snakes, there are a few actions you can take to minimize the chance of having a negative interaction with your snake neighbors.

Virginia has 30 native species of snakes. Depending on where you live, there are several species you are most likely to encounter. The Wildlife Center receives a number of calls and e-mails requesting help with snake identification. The most common species the Center is asked to identify are: 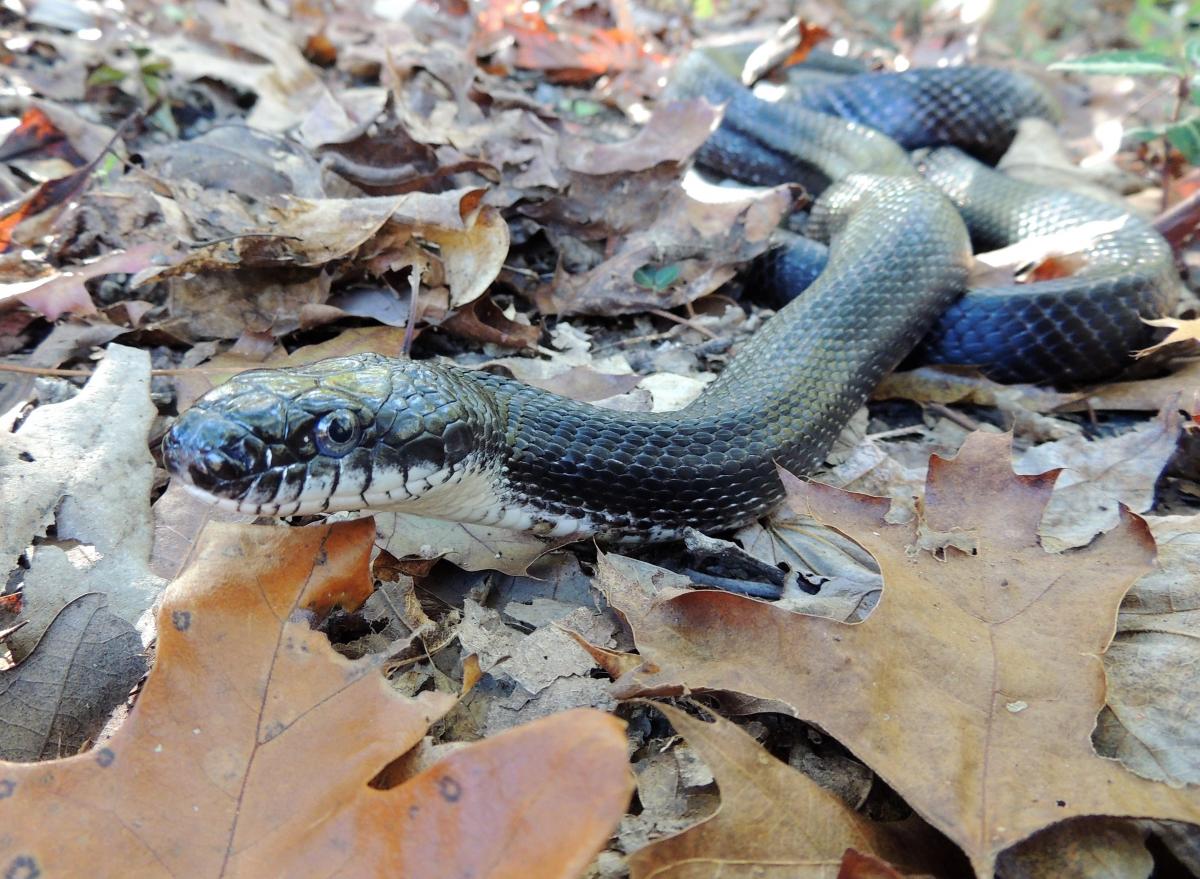 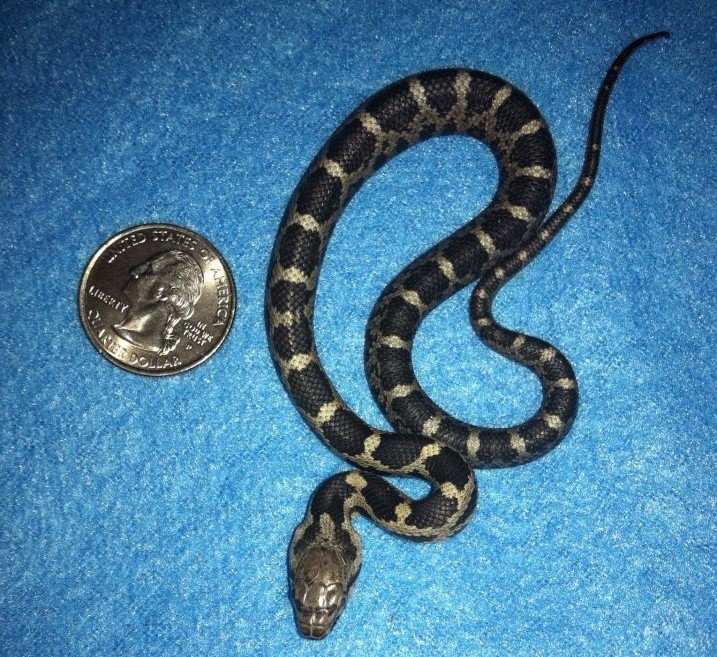 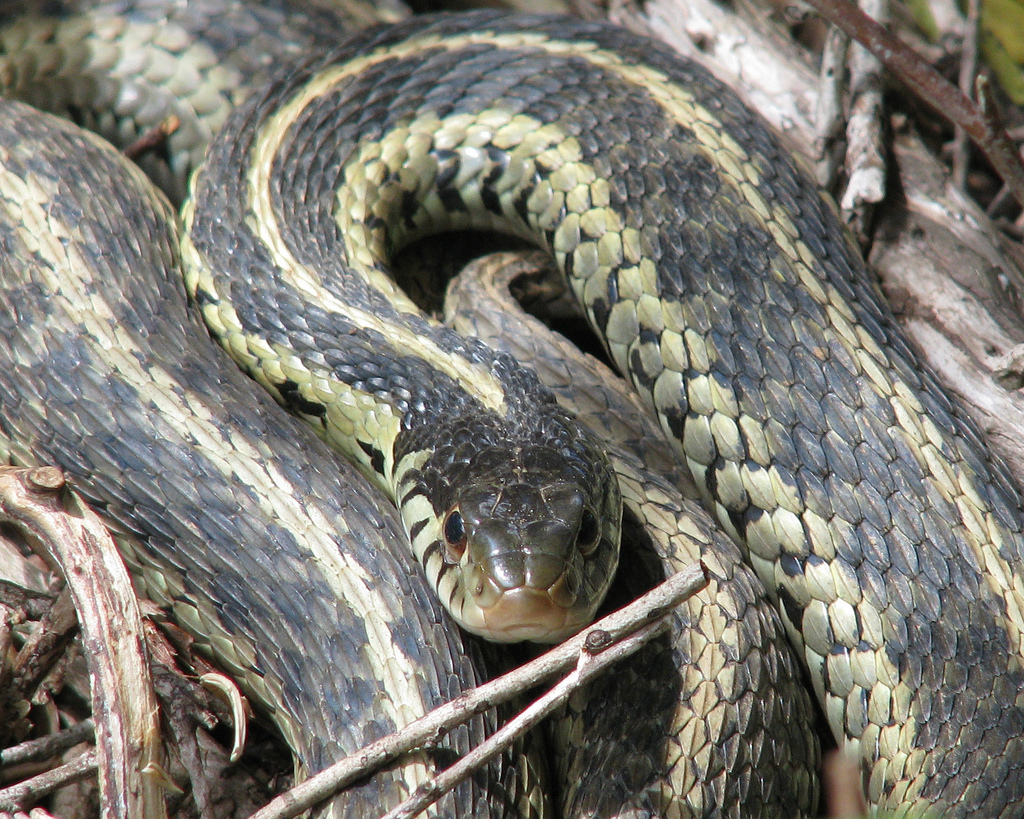 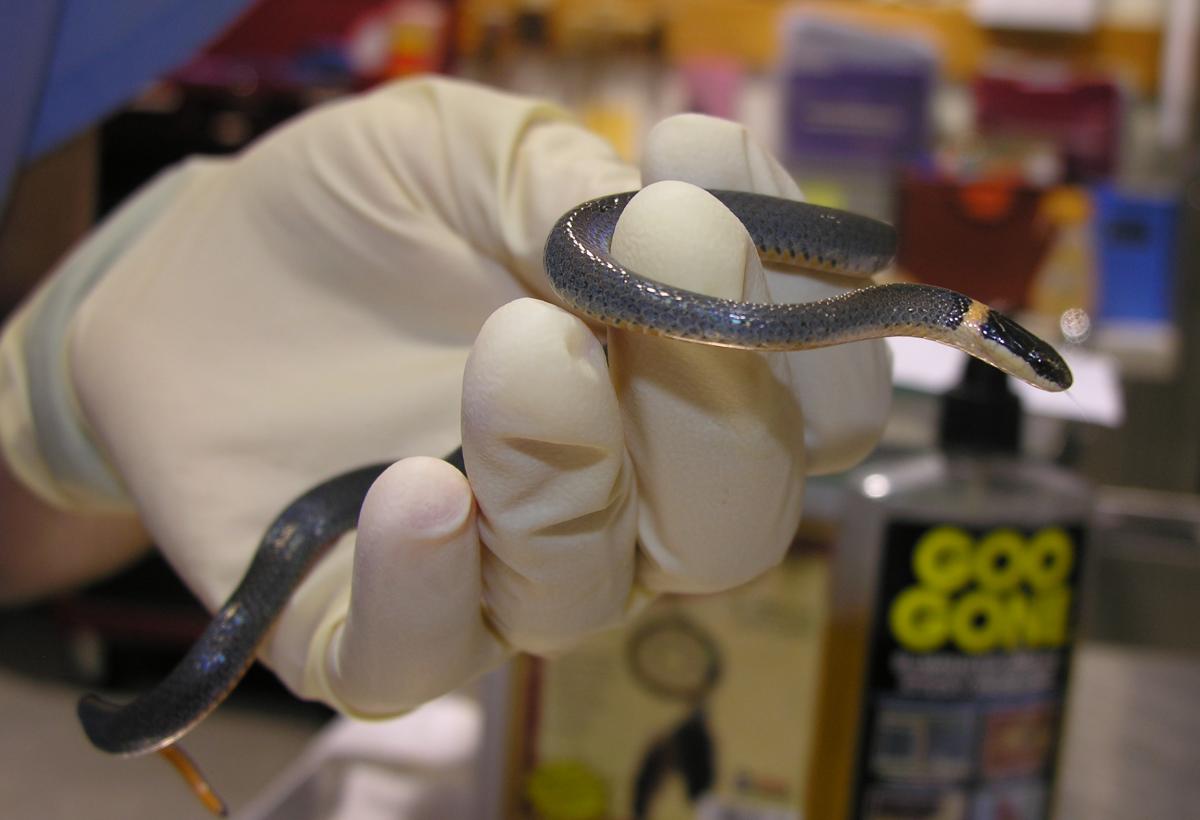 Many people fear snakes because they are worried that the particular snake they see is venomous. Learn basic identification skills to put your mind at ease.

Most of the snake species in Virginia are harmless, but three of the 30 species are venomous: Northern Copperheads, Timber Rattlesnakes, and Cottonmouths. Learning to identify these three can help you rule out what snake you are – or are not – seeing.

Copperheads, rattlesnakes, and cottonmouths all have vertical pupils, a heat-sensing “pit” near their eye (larger than their nostril), and a single row of scales underneath their tail. Non-venomous snakes have round pupils, no pit (just a nostril), and two rows of scales underneath their tail. Identifying some of these traits from a safe distance can be challenging; being familiar with the overall appearance of these species will help you to identify a venomous snake more reliably and safely.

Other characteristics like head shape, patterning, and even defensive behaviors like tail rattling are also used by non-venomous snakes, so solely relying on these traits to identify a snake can be misleading.

This species gets its name from the copper-like coloring on its head. The snake is typically tan to pinkish, with dark brown hourglass bands across the back. Baby copperheads are colored and patterned like adults but have bright sulfur-yellow tail tips. Adults are typically 24 to 36 inches long but can grow up to 48 inches long. Their venom is the least toxic of the three venomous snakes in Virginia; bites are seldom fatal. 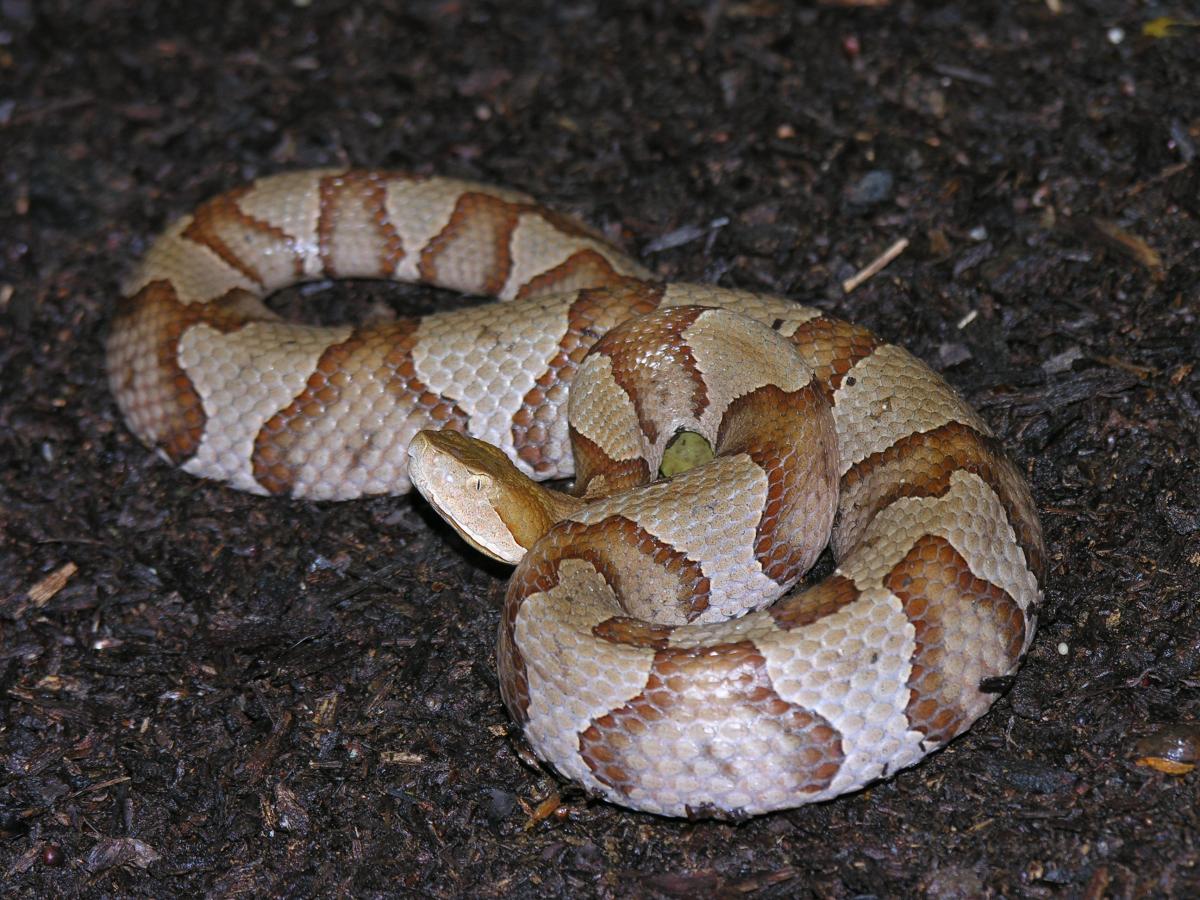 Copperheads can be found throughout Virginia in forests, old fields, rocky outcrops, and marshes. They eat small rodents, birds, lizards, amphibians, insects, and other snakes.

Look-a-likes: Most often, people assume that any snake with a pattern on its back may be a copperhead – the most common non-venomous snakes that may be mistaken for copperheads are juvenile ratsnakes, juvenile racers, hog-nosed snakes, milk snakes, and water snakes. The Virginia Herpetological Society has good resources to help compare and correctly identify snakes.  Patterns, geographic locations, and even behavioral characteristics can assist with proper identification.

These snakes are also known as water moccasins. Cottonmouths are large, stout, aquatic snakes that are found in the southeastern corner of Virginia. They range in color from dark green to black and have several darker hourglass bands across their backs. Adults are typically 30 – 48 inches, but can grow up to 61 inches long. The young are similarly patterned, but tend to be pinker in color; their tail tips are also bright yellow. 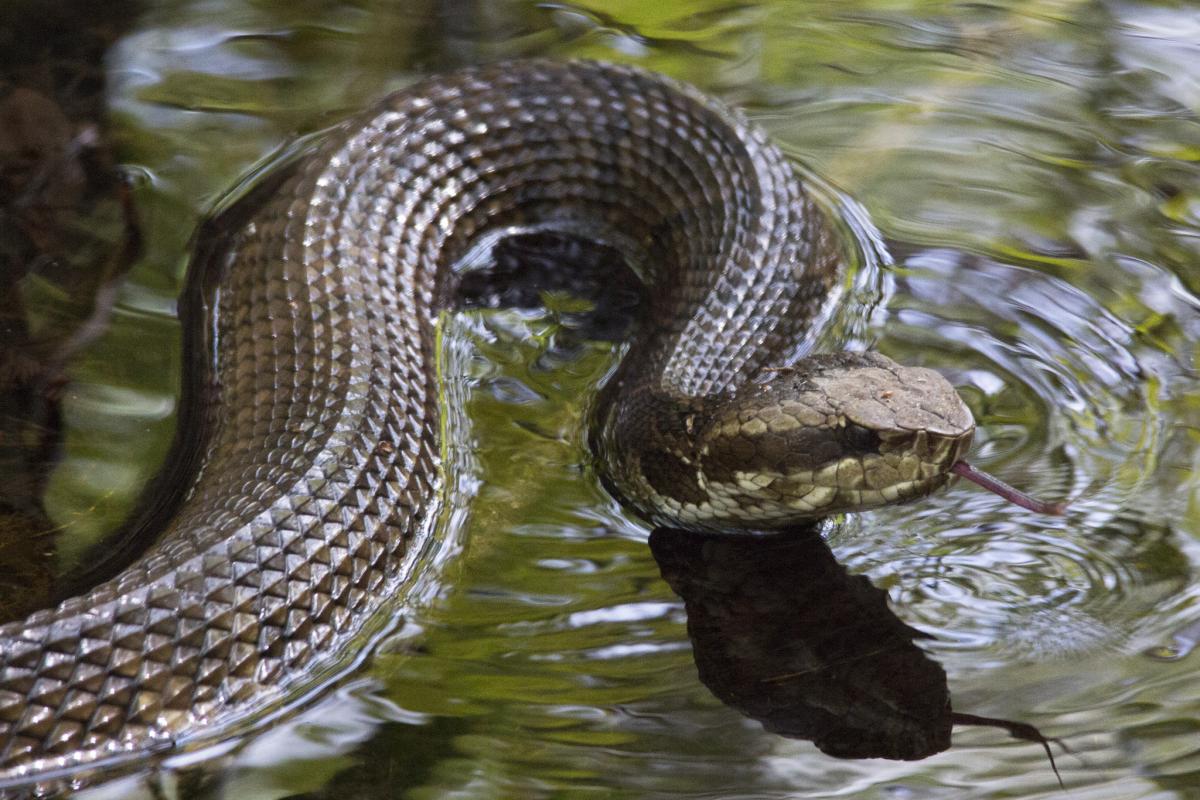 Look-a-likes: People most often assume that any snake in the water is a cottonmouth; Virginia has three species of non-venomous water snakes that are commonly mistaken for cottonmouths. The Virginia Herpetological Society has good resources to help compare and correctly identify snakes.  Geographic location can be helpful with correct identification; cottonmouths are only found in a small part of Southeast Virginia.

This large, thick-bodied species ranges in color from yellow to black and has dark chevron-shaped bands on its back. The snakes have several hardened segments on end of the tail, which form the rattle. Young rattlesnakes look similar to adults but typically have one rattle segment. Adult rattlesnakes can reach up to 67 inches. 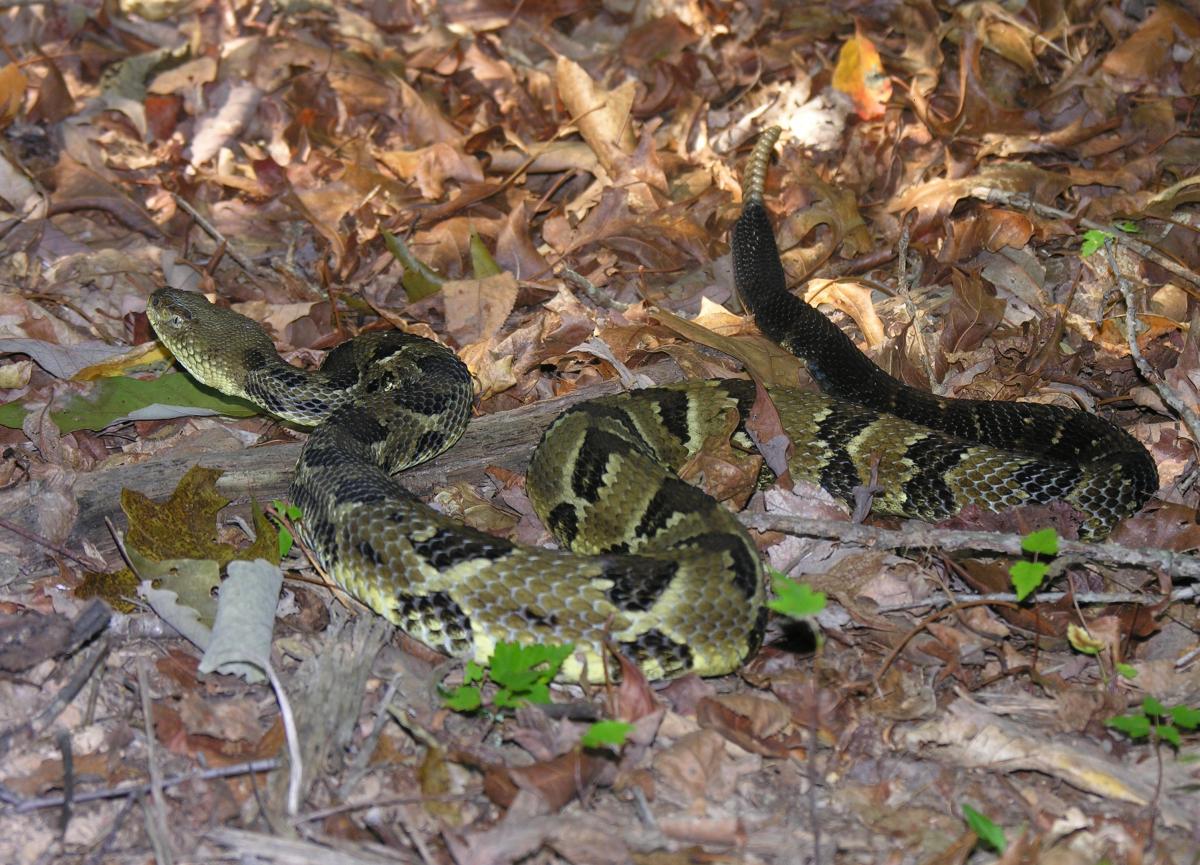 Timber Rattlesnakes are found in forests and rocky ridgetops in the mountainous portions of Virginia; the endangered canebrake rattlesnake can be found in the southeastern corner of Virginia.  Rattlesnakes eat small mammals, birds, and frogs.

Look-a-likes: No other species in Virginia has a hard rattle on the end of its tail, but Eastern Ratsnakes will often mimic rattlesnakes by flicking their tail rapidly against leaf litter and other objects to replicate a rattle-like sound.

By approaching a venomous snake or attempting to capture or kill the snake, you are putting yourself at greater risk of being bitten.

Remember, venom is an important hunting tool for the snake – it’s how they catch and kill their food. Even venomous snakes would rather flee than bite. Using venom for defense is a last resort for snakes; while it may save their life, they are effectively “wasting” their venom on something that they can’t eat.

If you find a venomous snake in your yard, don’t try to move or kill it.  Call a humane professional wildlife removal company with venomous snake experience, or just let it go on its way if children and pets aren’t present.

The Wildlife Center encourages people to humanely remove snakes from their home or relocate the snake to another part of the property if necessary – and to never kill them. Not only is killing the snake illegal, it also doesn’t solve the issue. If there is a snake on your property, it means that the habitat is desirable and there is a plentiful food supply. If you kill or remove the snake, another snake may readily move into the empty (and desirable) habitat. If you leave the resident snake alone, there are steps you can take to ensure you encounter the snake less frequently.

Snakes in the Yard: If you see a snake in your yard, the best thing to do is let it go on its way. After all, it’s likely helping reduce pests around your home and garden! If you’d rather not continue seeing snakes, eliminate the areas where snakes want to spend time. Snakes don’t like being out in the open and often seek cover. Remove potential hiding spots, including:

Remember, if you see snakes in your yard, it’s likely that there is a good food source there. Deterring the prey of snakes is a very important part of deterring snakes. Clean up trash, spilled birdseed, and pet food to eliminate mice.

Snakes in House: Snakes may enter a house to seek food (usually mice) or temporary shelter. Some snakes may try to overwinter in a basement or cellar area; they depend on their external environments to regulate body temperatures.

The simplest way to remove a harmless snake is to open an exterior door, and use a broom or shovel to help escort the snake outside. If the snake is coiled, you can place a trashcan over it, then slide stiff cardboard underneath to scoop up the snake. If the snake is non-venomous and you are comfortable with snake handling, put on leather gloves and pick up the snake directly by the end head, while supporting its body with your other hand.

Sometimes homeowners find a snake shed in their basement, indicating that a snake is there. If you are searching for the snake to remove it, look in warm protected areas where the snake may be hiding. Check around appliances, including computer display monitors. You can also set up a heating pad (set to low) in a semi-protected area to see if you can lure the snake to that spot.

Never release a snake found indoors in the cold winter months into the wild; snakes need to hibernate and won’t be able to survive in the cold weather. Call your closest permitted reptile rehabilitator.

After removing the snake, search for all entry points and completely seal holes and cracks; mouse-proofing your home will also effectively snake-proof it!

There is a variety of commercial snake repellents on the market, though the Center cannot confirm that they are effective and/or humane.

Exclusion is the only long-term solution for snake-proofing your home and property; this may be as difficult as rodent-proofing since snakes are often found in the same areas. Inspect the exterior of your house, from the foundation to the eaves. Both mice and snakes can climb!

Snakes can be fenced out of a specific area; some homeowners may choose to do this to provide a snake-free area for children to play in, particularly snake-heavy habitats. The Virginia Cooperative Extension has instructions for constructing a fence.

How to Help an Injured Snake

Properly identify the snake to ensure it is non-venomous before attempting to pick it up and contain it. Wearing gloves, grab the snake directly behind the head to ensure that it cannot bite you. Place the snake in a bucket with a tight-fitting lid (with small air holes), or place in a pillowcase, tie securely, and place the pillowcase in a box for transport. Snakes can squeeze out of boxes, so ensure that the snake is properly contained before placing in your car to take to a permitted wildlife rehabilitator.

More Information about Living with Snakes

The Humane Society: What to Do About Snakes

The National Wildlife Federation: Eliminating Snakes in your Yard