Rodenticides don't just harm the rodents they target. Thousands of wild animals are killed by these poisons every year.

Rodenticides are a type of poison commonly used by homeowners and pest control companies to get rid of unwanted rodents. These poisons work by preventing a rodent's blood from clotting, causing them to bleed internally, but they don't just work on the rodents they target. Rodenticides are just as lethal for any animal that consumes the poison. Each year, thousands of non-target wildlife species are killed when they directly or indirectly consume rodenticides.

The Wildlife Center has admitted many patients with rodenticide poisoning, though it can be difficult to diagnose. There is no reliable blood test for rodenticides in most wildlife species, nor is there a standardized clotting factor for veterinarians to reference. Eastern Screech Owl #21-1102 is just one example of the rodenticide victims the Center sees each year. Though this owl was lucky and was able to recover, many animals are not so fortunate. Prevention is the key to solving this issue. By choosing to use alternatives to rodenticides to handle rodent problems, you can help stop this toxin from killing wildlife. 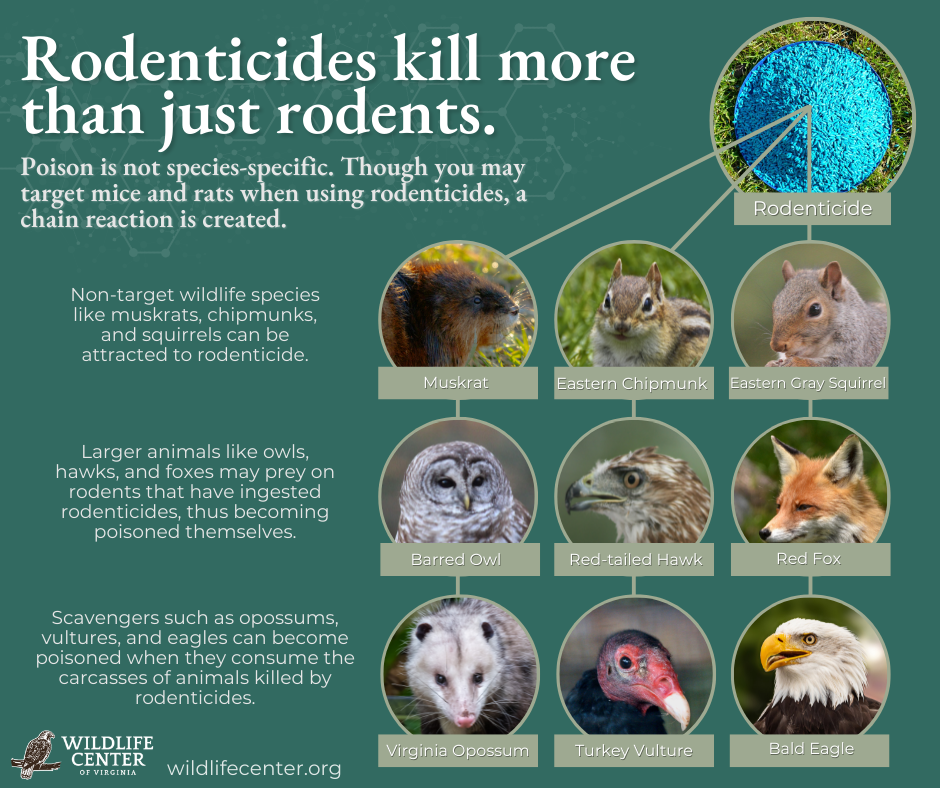 Why are Wild Animals Eating Rodenticides?

Rodenticide poisons are designed to smell and taste good to rodents to entice them to eat it, but they can be just as appealing to wild animals, including squirrels, opossums, skunks, raccoons, and foxes. Even if rodenticides are kept out of a wild animal’s reach, mice and rats will often carry the poison out with them, sometimes leaving it in places where wild animals can find it. Once consumed, these poisons will have the same anti-coagulation effect on wild animals as they do for rodents, causing internal bleeding, cardiovascular shock, and eventually death.

Passing the Poison Through the Food Web

Most cases of rodenticide poisoning in wildlife don't happen because an animal directly consumes the poison, it occurs secondarily when raptors or other predators consume a poisoned rodent. When a mouse or rat consumes rodenticides they generally do not die right away, and many of them make their way out into the environment before succumbing to the poison. These poisoned rodents are weaker and less coordinated than their healthy counterparts, making them easy prey and passing the poison throughout the food web. Once a predator consumes a poisoned rodent, the rodenticides bioaccumulate, or build up, in their bodies and inhibit their blood’s ability to clot, causing them to suffer a slow and painful death.

How Widespread is this Issue?

Though the effects of rodenticides are well studied, the extent of their impact on wildlife is still being discovered.  One study found that all of the 43 Red-tailed Hawks admitted to a wildlife clinic in Massachusetts had anticoagulant rodenticides present in their liver tissues. Another review of rodenticide poisoning showed that this issue is wide-ranging and isn't exclusive to certain types of animals; birds, mammals, reptiles and invertebrates are all being exposed to these poisons.

Danger to Pets and Children

If you suspect your child or pet may have ingested or come into contact with rodenticides, call these poison control numbers, or call your veterinarian for your pets and 911 for your children.

The following are some safe, environmentally friendly ways to solve rodent problems around your home or business.

Raptors are the Solution