The Center was able to make several minor repairs in the months following the ice storm to ensure that most patient enclosures were usable, for both recovering patients as well as education animals who need to "borrow" an enclosure. A tree service removed downed and dangerous trees;  repairs were made to the Black Bear pen electric fence, and demolition began on the vestibule and damaged roof of the Bear Pens. In February 2018, the bulk of the reconstruction efforts began with Lantz Construction Company.

Week Five of major reconstruction has gone well … so well, that the Lantz Construction team has finished their original list of projects!

The last thing left on their list this week was completing the Maggie/Grayson/Buttercup education enclosure. They were able to finish putting up walls and ceilings, filled the enclosures with gravel, and even helped the outreach staff create, hang, and re-turf perches! 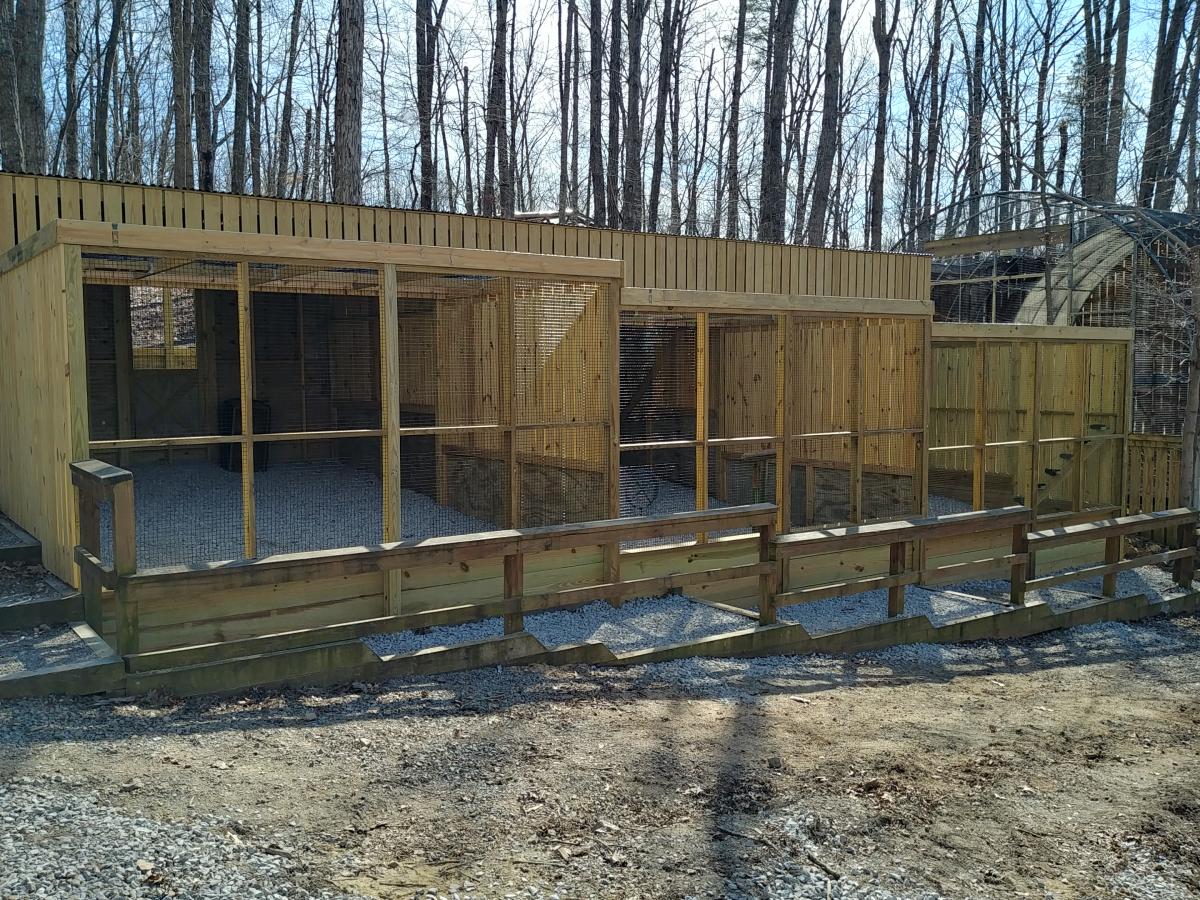 The final touches were finished on Thursday afternoon. To celebrate, Grayson the Broad-winged Hawk was moved back “home” at the end of the day!

Maggie the Peregrine Falcon and Buttercup the Black Vulture will be moved next week, after director of outreach Amanda has time to hang cameras in the enclosures once again.

One additional project on the reconstruction list is rebuilding the vestibule around the bear pens; this area was damaged in November. Additionally, there will be repairs to be made in the Black Bear Complex after the 18 Black Bears are released in April.

Week Four of Lantz Construction’s work has been productive – despite a surprise snowstorm on Thursday! Fortunately, since the roof is on the back half of the new education enclosure and hallway, two workers were able to come and work despite the inclement weather. They made and installed doors into each of the three enclosures. And the new roof proved that it holds snow! 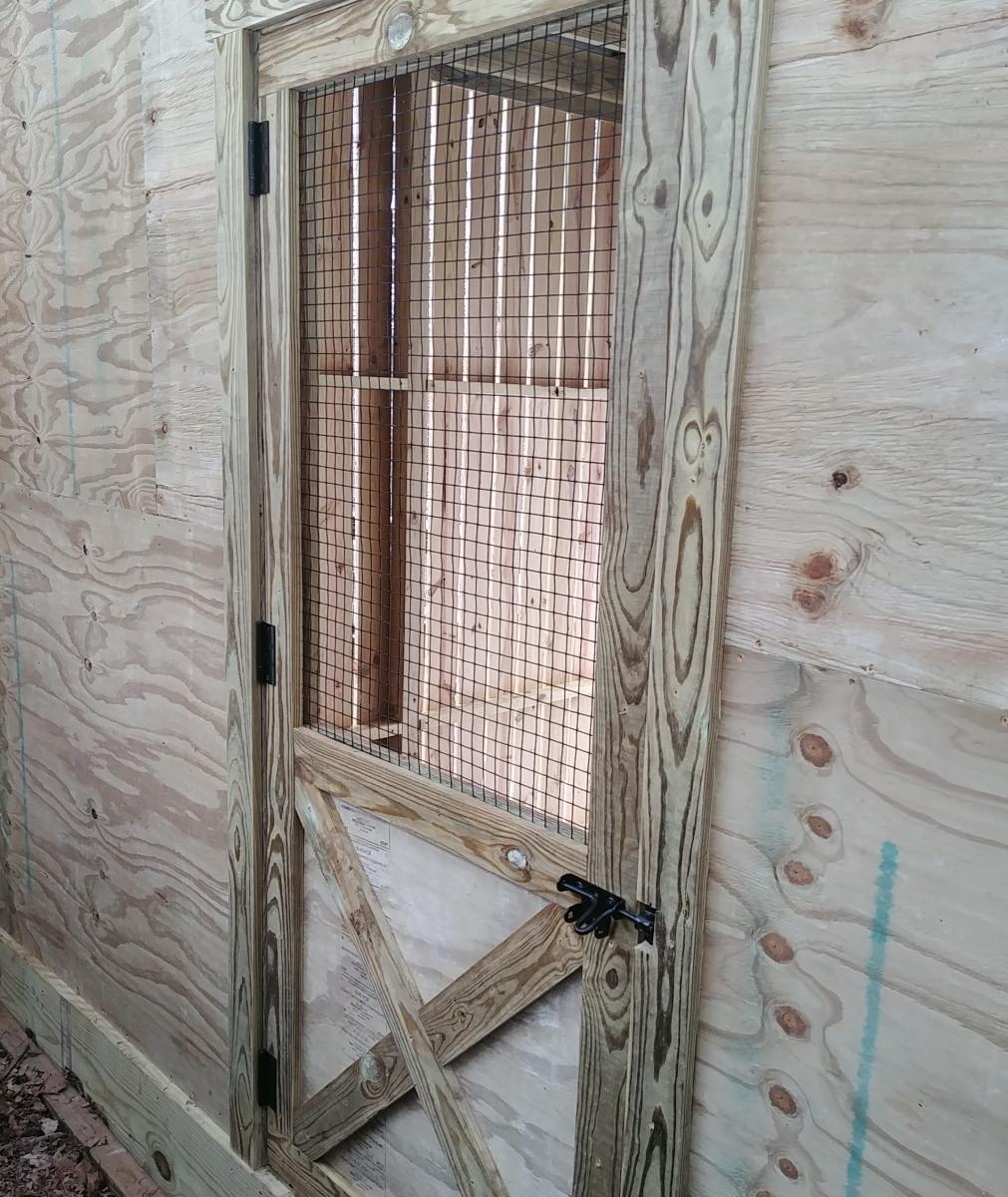 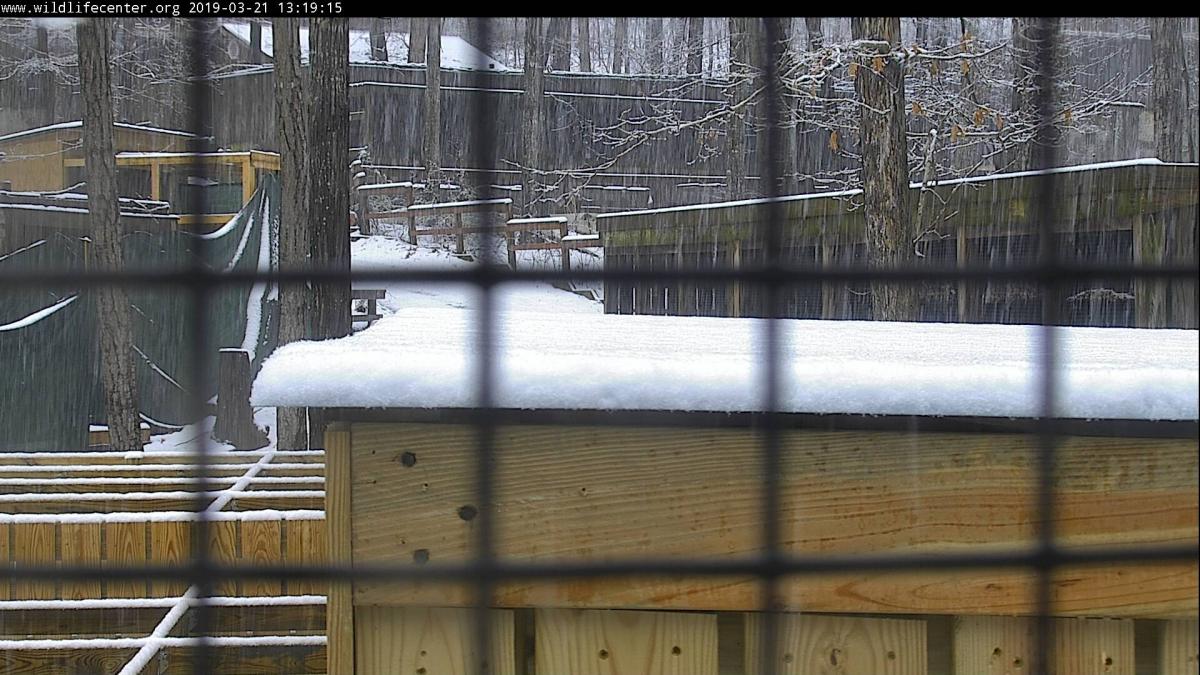 The education enclosure is nearing completion; the next big step is to put up the special vinyl-coated welded wire on the front and sides of the enclosure. 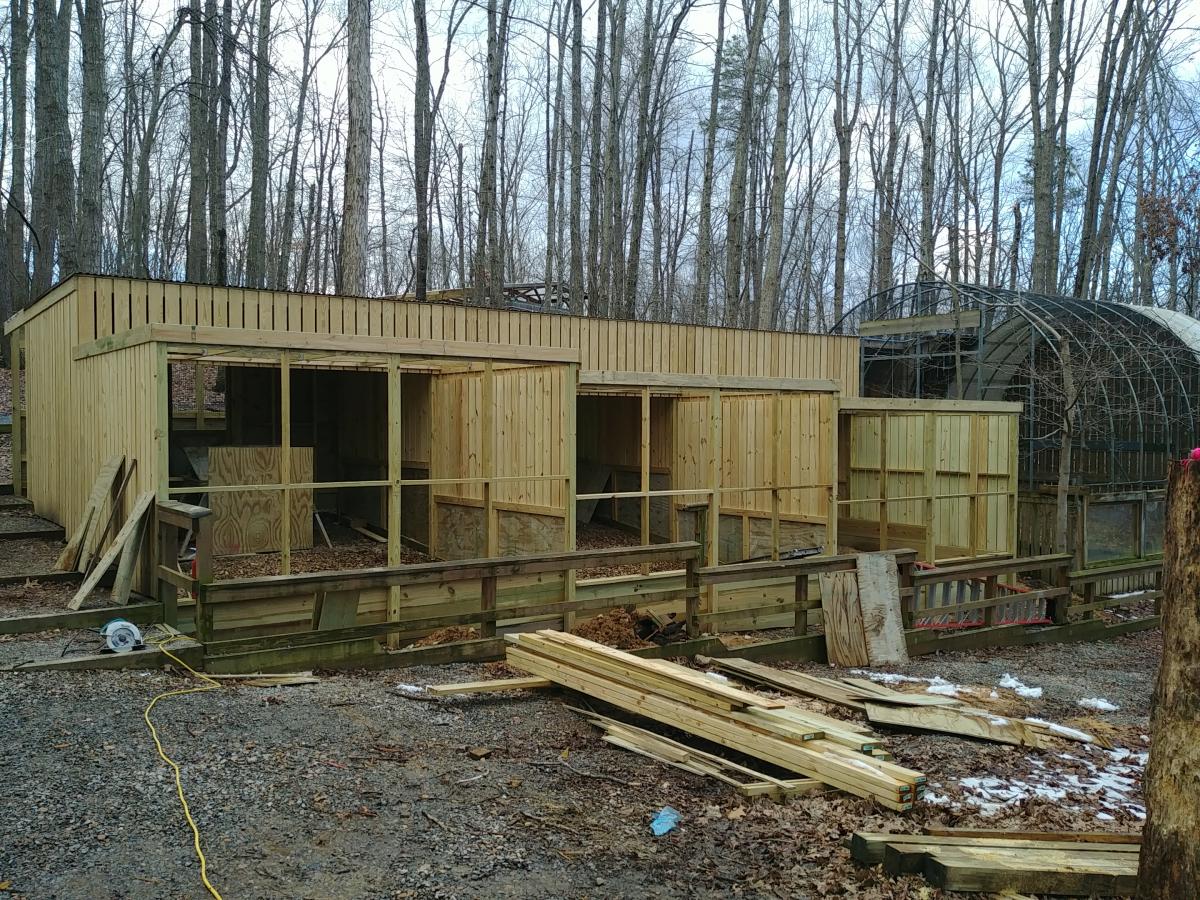 Work on re-roofing Flight Pens 4-6 continues as well; the crew hopes to finish this project this afternoon. 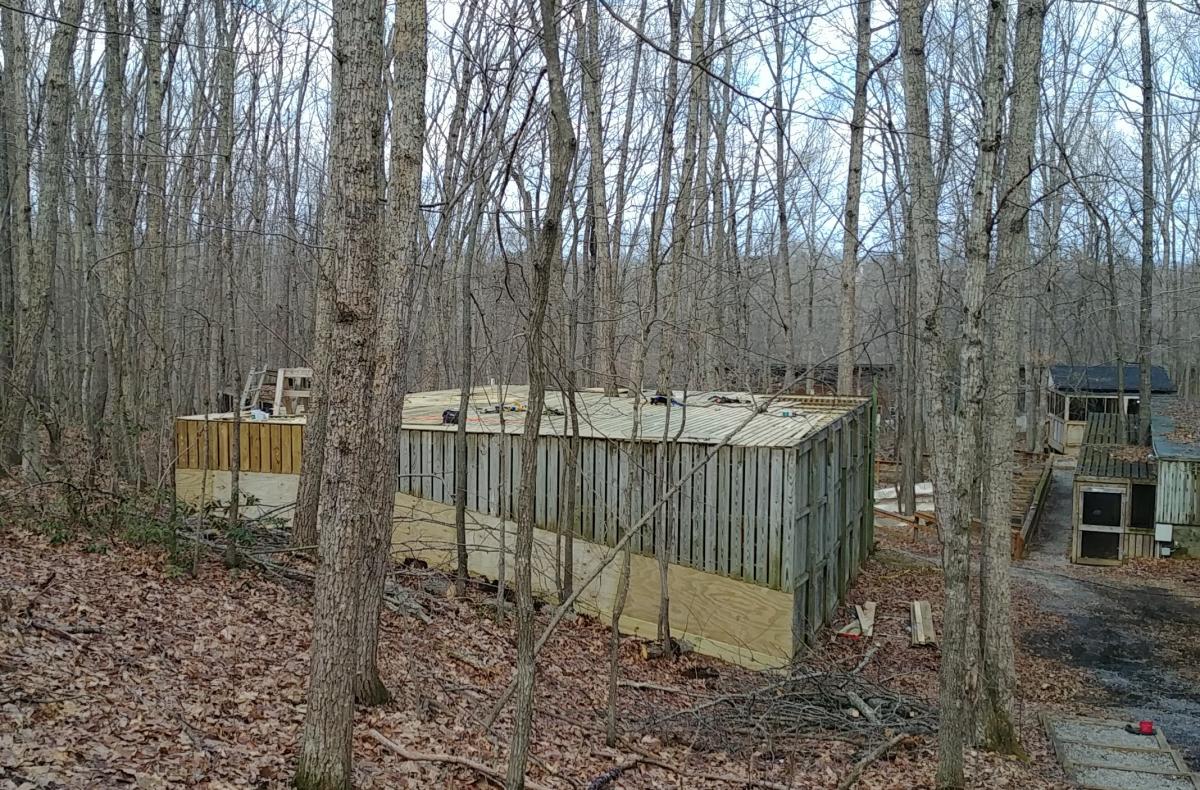 WHSV-TV came out to cover the reconstruction efforts; you can watch that story here.

Week Three of major reconstruction has been rolling right along!

The crew spent their time in two main areas this week: the education enclosure, and replacing the roof of flight pens 4-6. The November ice storm damaged several boards on the roof of flight pens 5 and 6; in both of these enclosures, trees growing through the enclosure and roof caused structural damage that has made it unsafe to house recovering raptors in these patient pens. After assessing the damage, the team decided that it would be best to replace the entire roof structure of the flight pen complex, which overall will make the structure safer. This week, the crew was able to remove the roof of FP5 and FP6 and started framing the new roof. 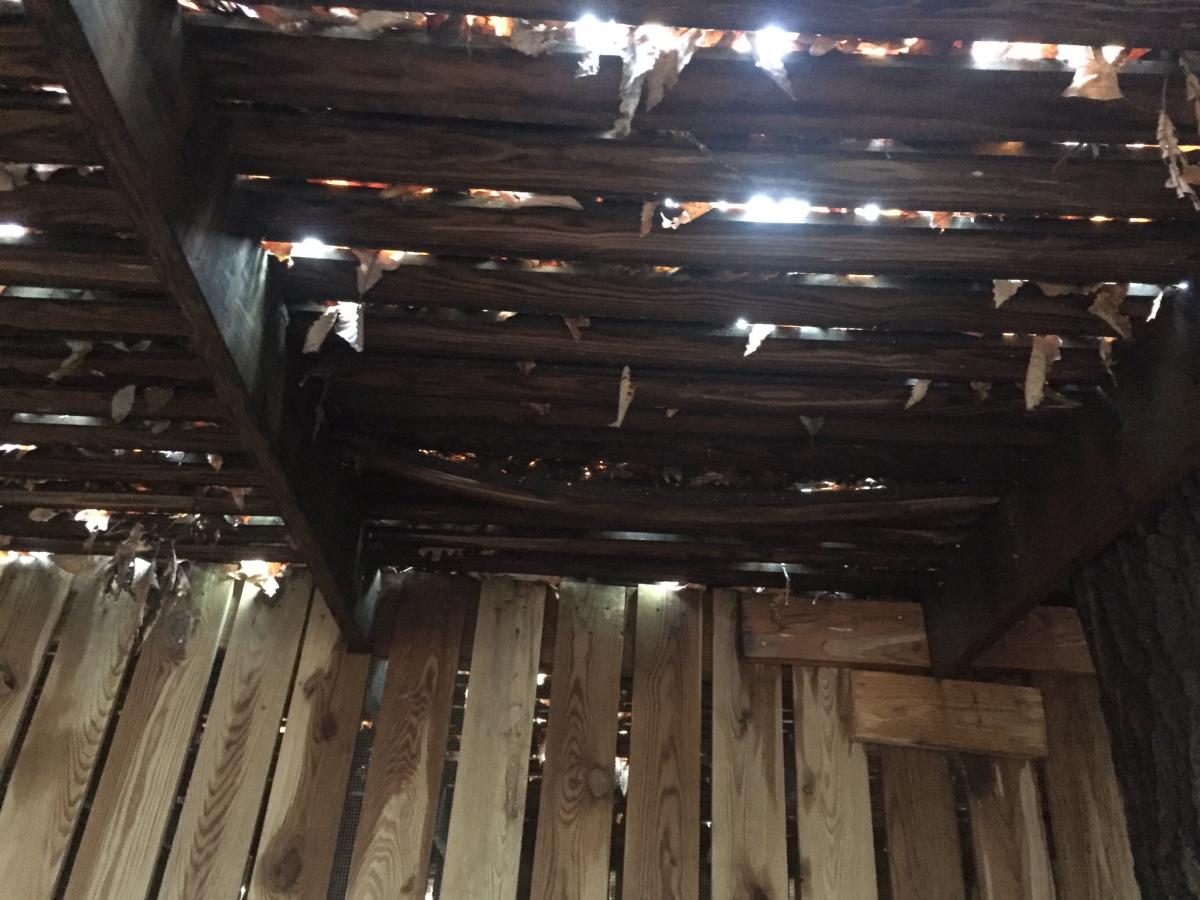 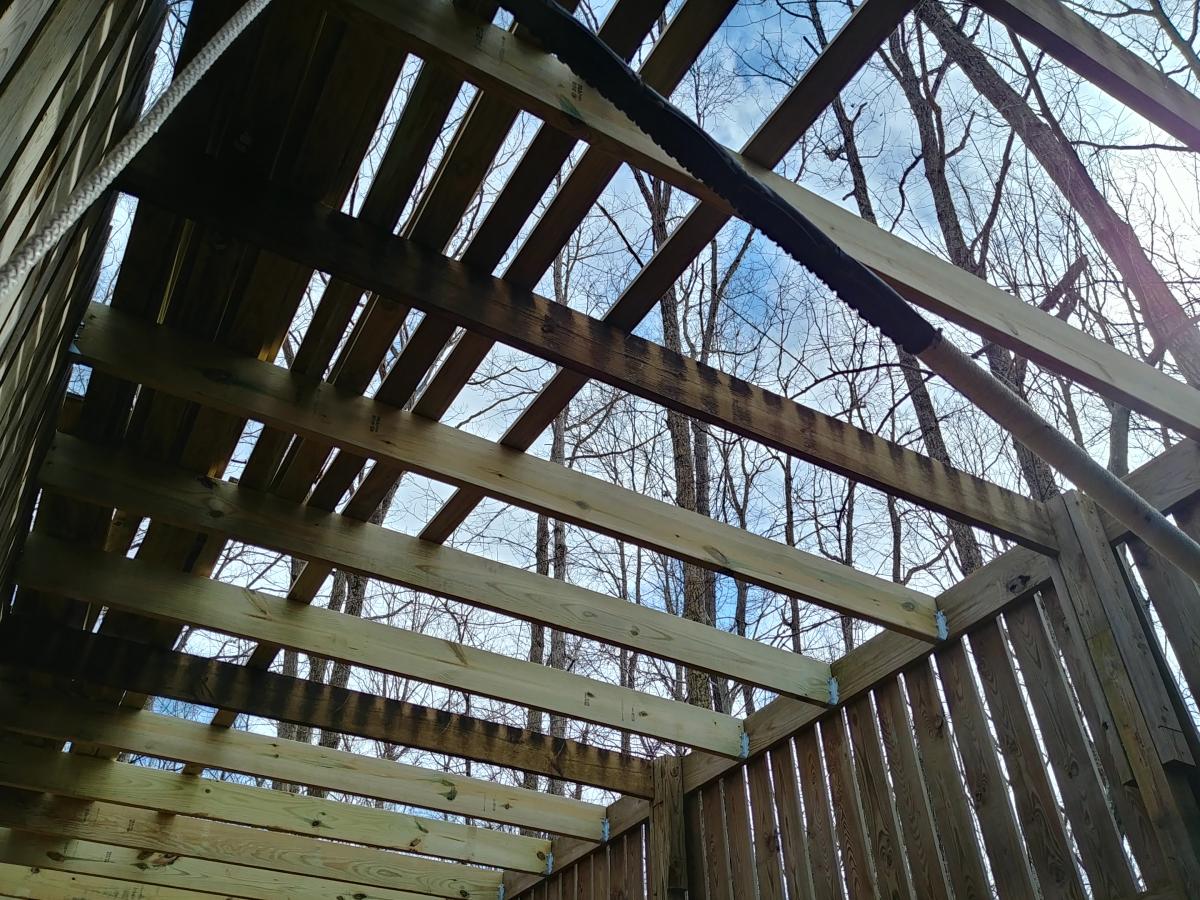 The education enclosure – the most significant item on Lantz’s list – is coming along nicely. Some exterior walls are in place, and the back half of the enclosure is under roof [the front portion of the enclosure will be vinyl-coated welded wire to give the birds access to natural weather]. We’re very excited to see the progress! 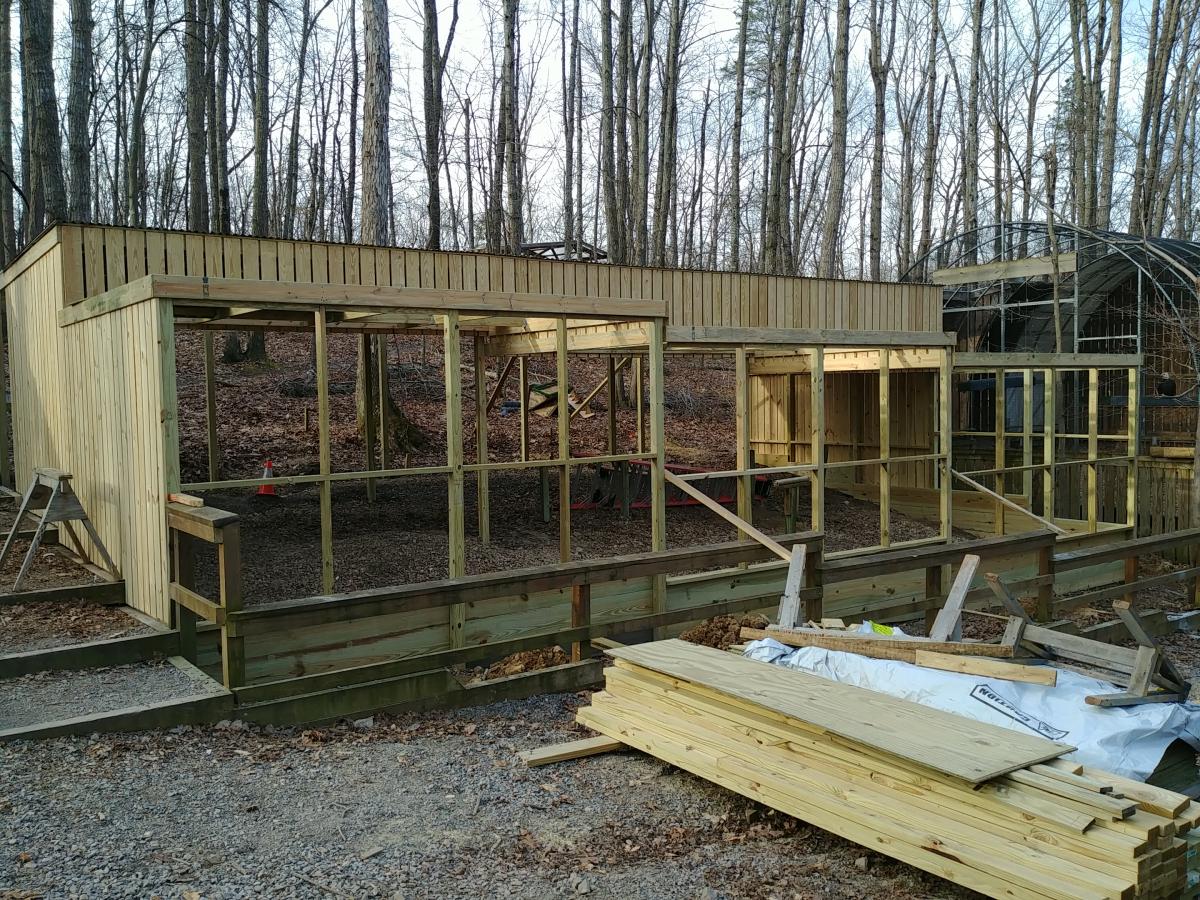 The second week of construction is complete! The construction crew was on-site Monday through Thursday (and luckily, the snowy weather held off until Friday.)

In preparation for the crew’s arrival, Amanda and Raina erected a temporary physical barrier in front of the enclosures of several education animals that will remain in their own homes during construction – Ruby the Red-tailed Hawk, Edie the American Kestrel, Athena the Barred Owl, and Hudson the Gyrfalcon. During construction this week, the outreach team monitored the birds’ responses to the construction and all seemed relatively unfazed. 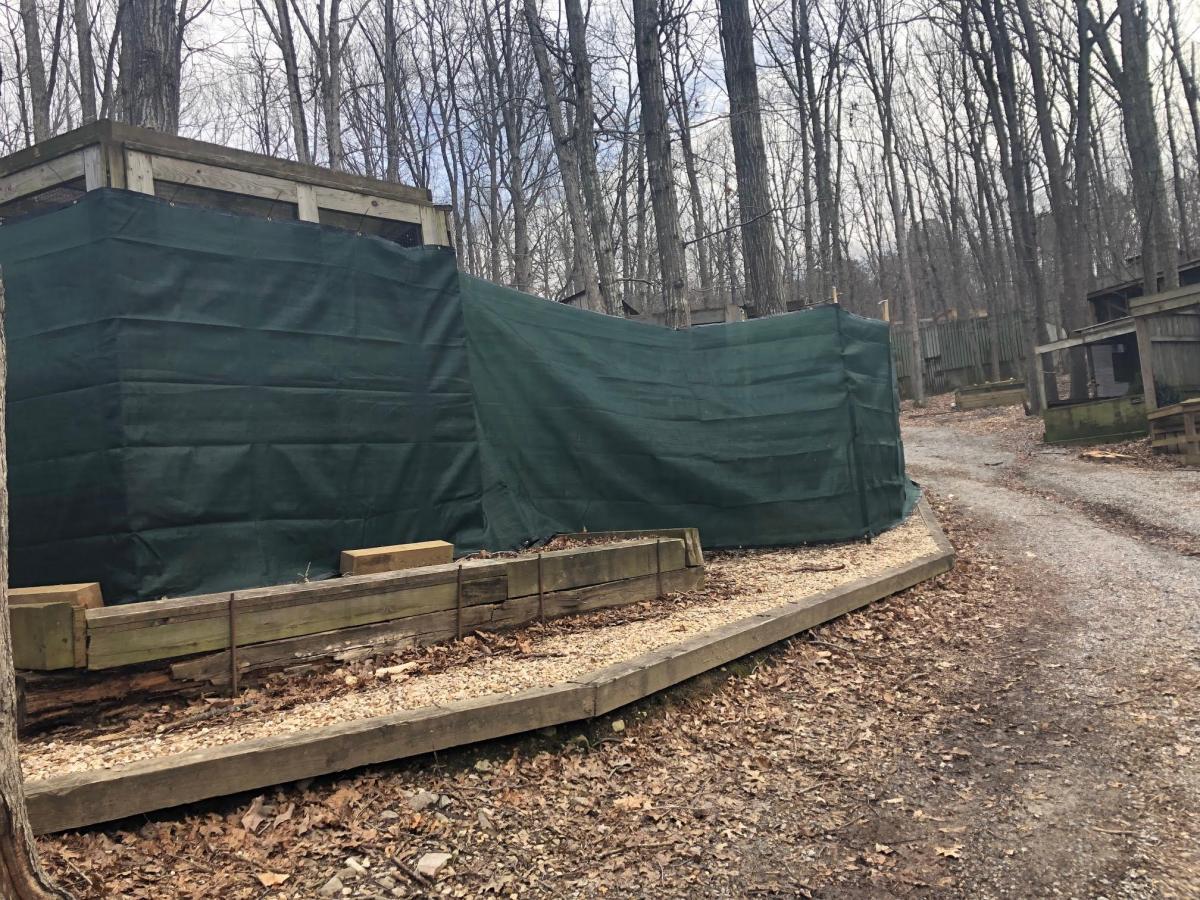 The crew completed a rebuild of the Bear Pen roof, as well as repairs to the A-pens and the floor of the A3 tower. 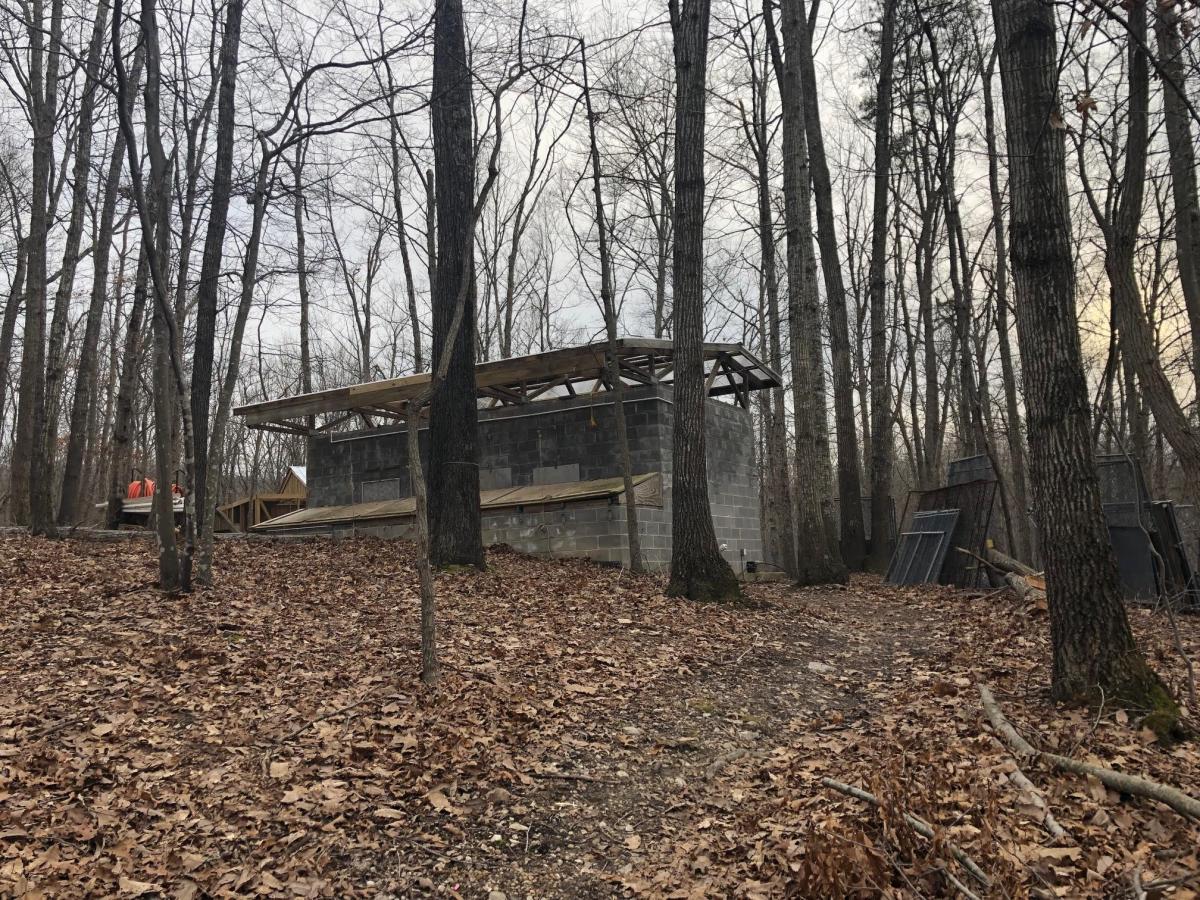 Perhaps the most obvious progress is the demolition of the education animal complex – the team removed the old structure that was damaged during the storm and began rebuilding the enclosure complex. 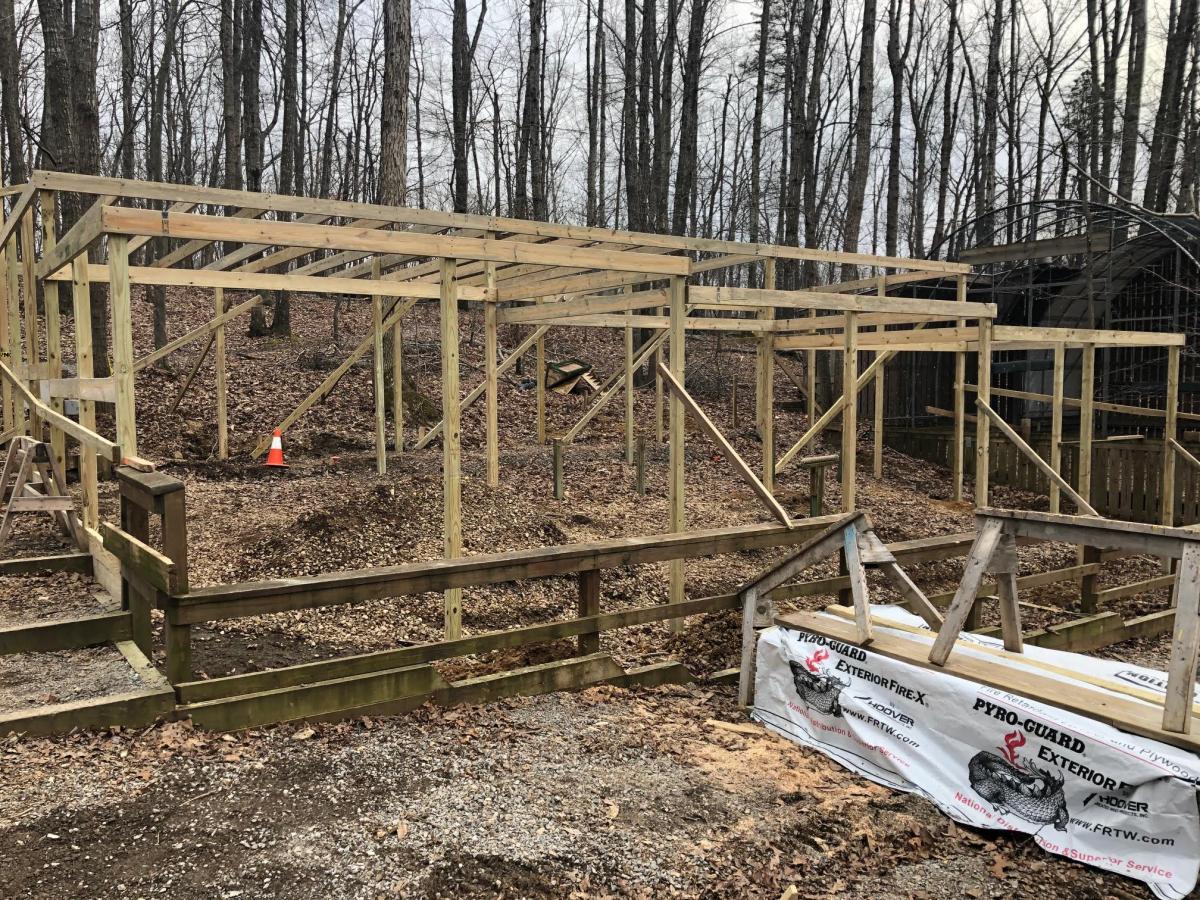 Next week, the construction crew will continue working on the education complex, which they anticipate will take three weeks to complete. They will also make repairs to the Flight Pen enclosures, which they hope to finish by the end of the week.

Week One of major reconstruction is going well! This week, the Lantz Construction crew has been working on replacing the plywood on all of A1 and A2, two of the Center’s largest flight pens. A couple of trees fell on these flight structures in the November 2018 ice storm; one tree was uprooted and damaged the base of the A2 flight pen. When assessing damage and planning replacement, the Wildlife Center team decided it would be best to go ahead and replace all of the aging plywood rather than just fixing one segment. 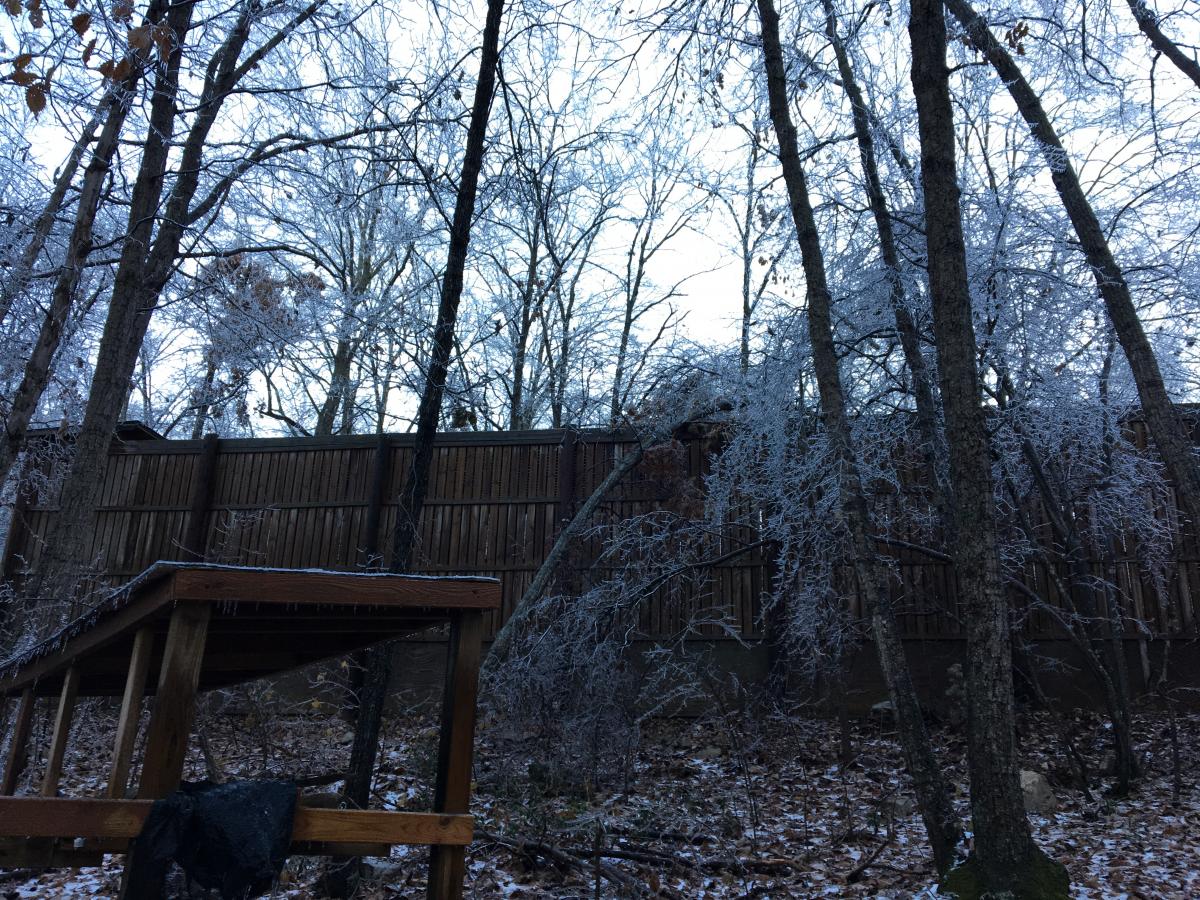 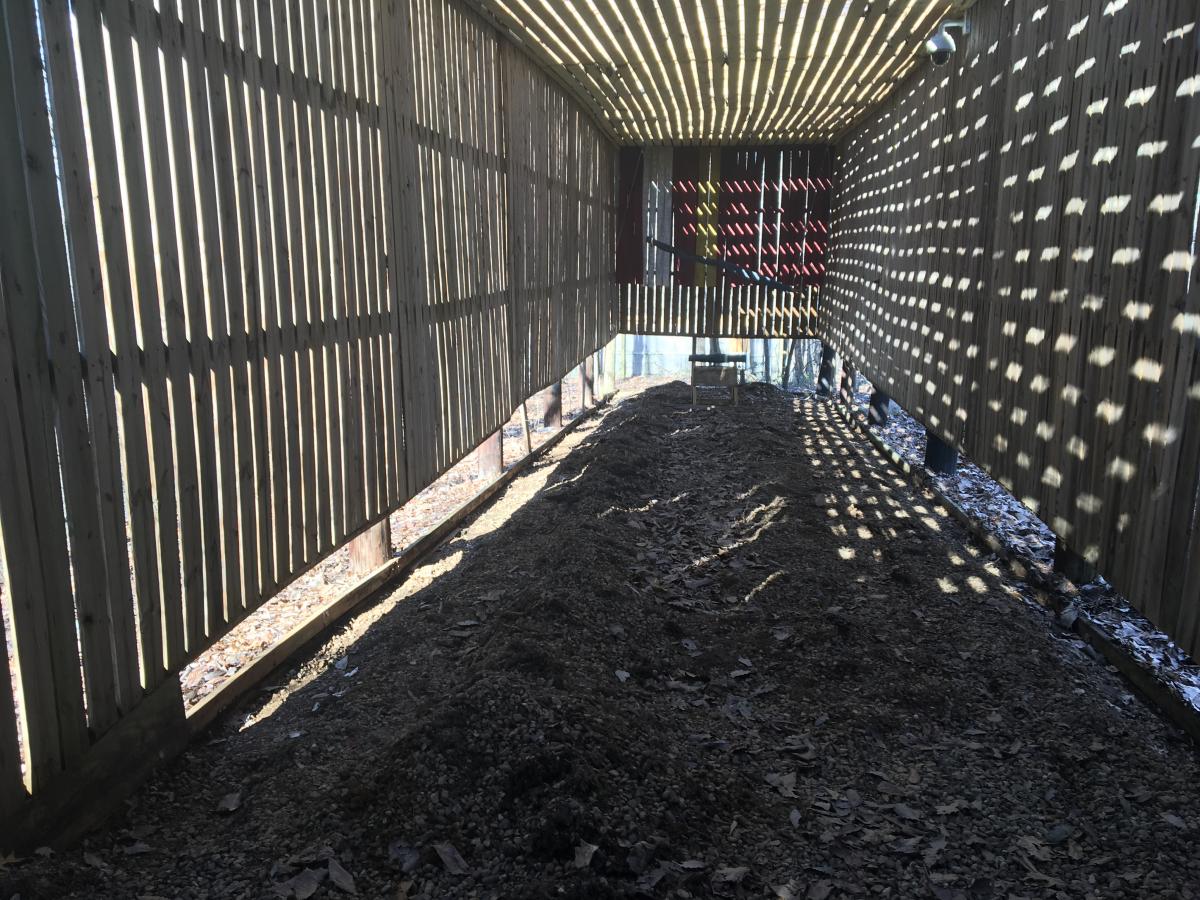 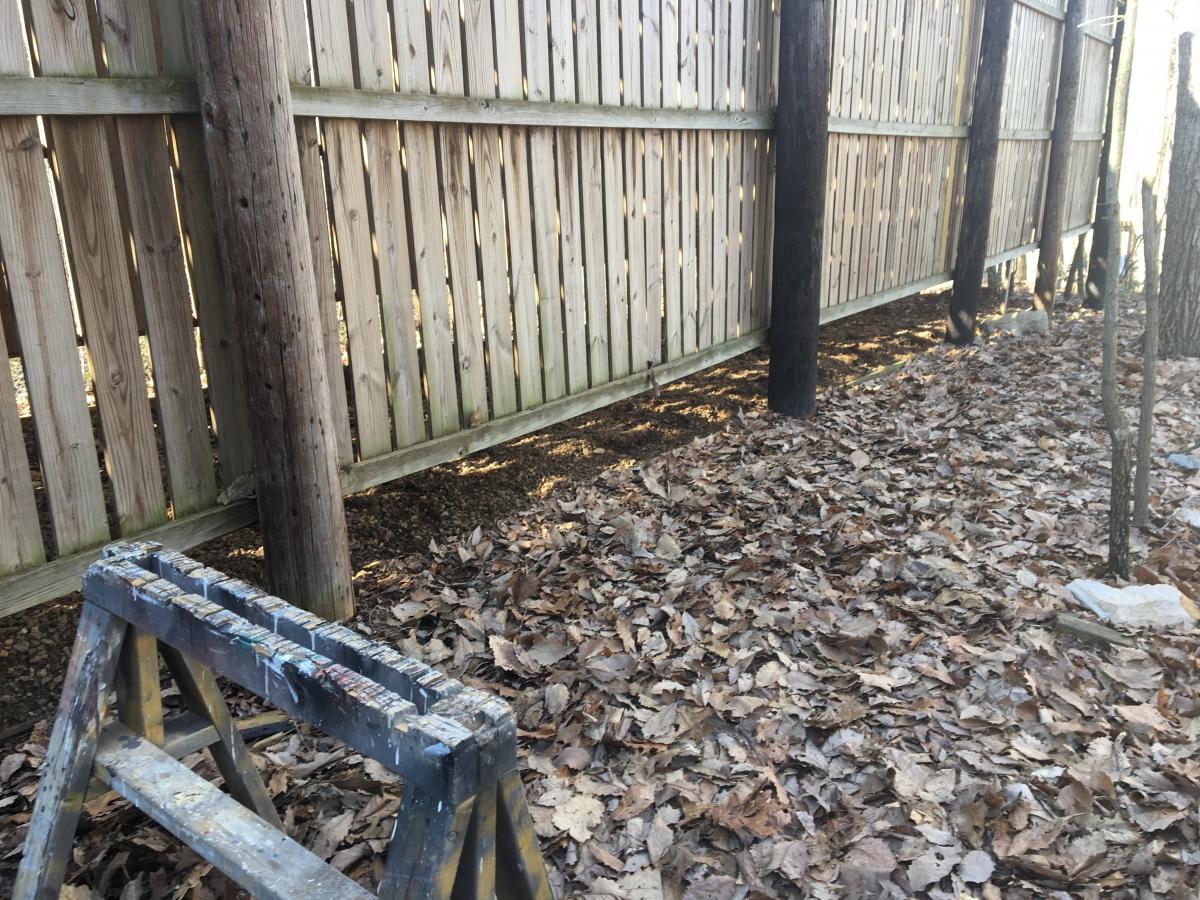 The crew also started reconstructing the area where the Center scrubs and disinfects crates used by patients; this area was hit by a large tree in November, which took out the entire back wall of the cleaning deck. 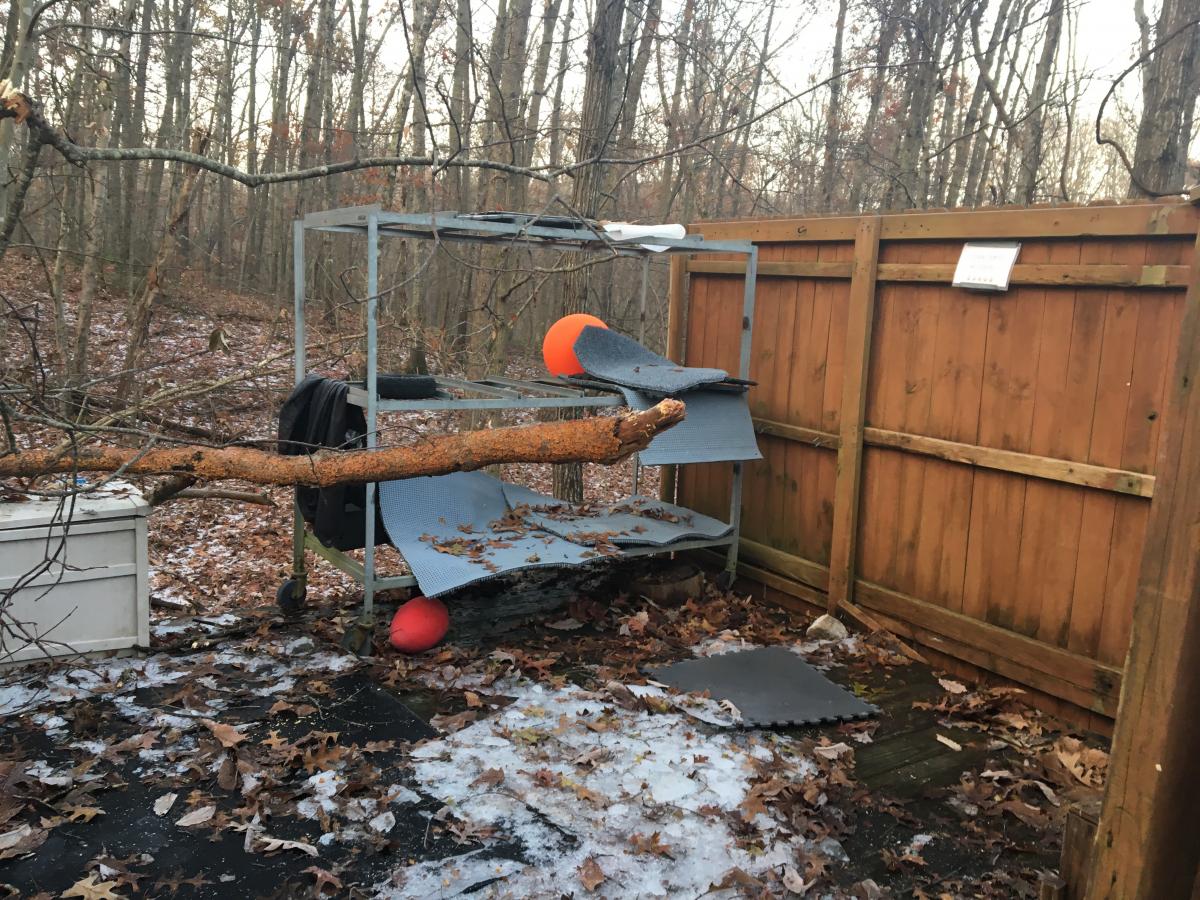 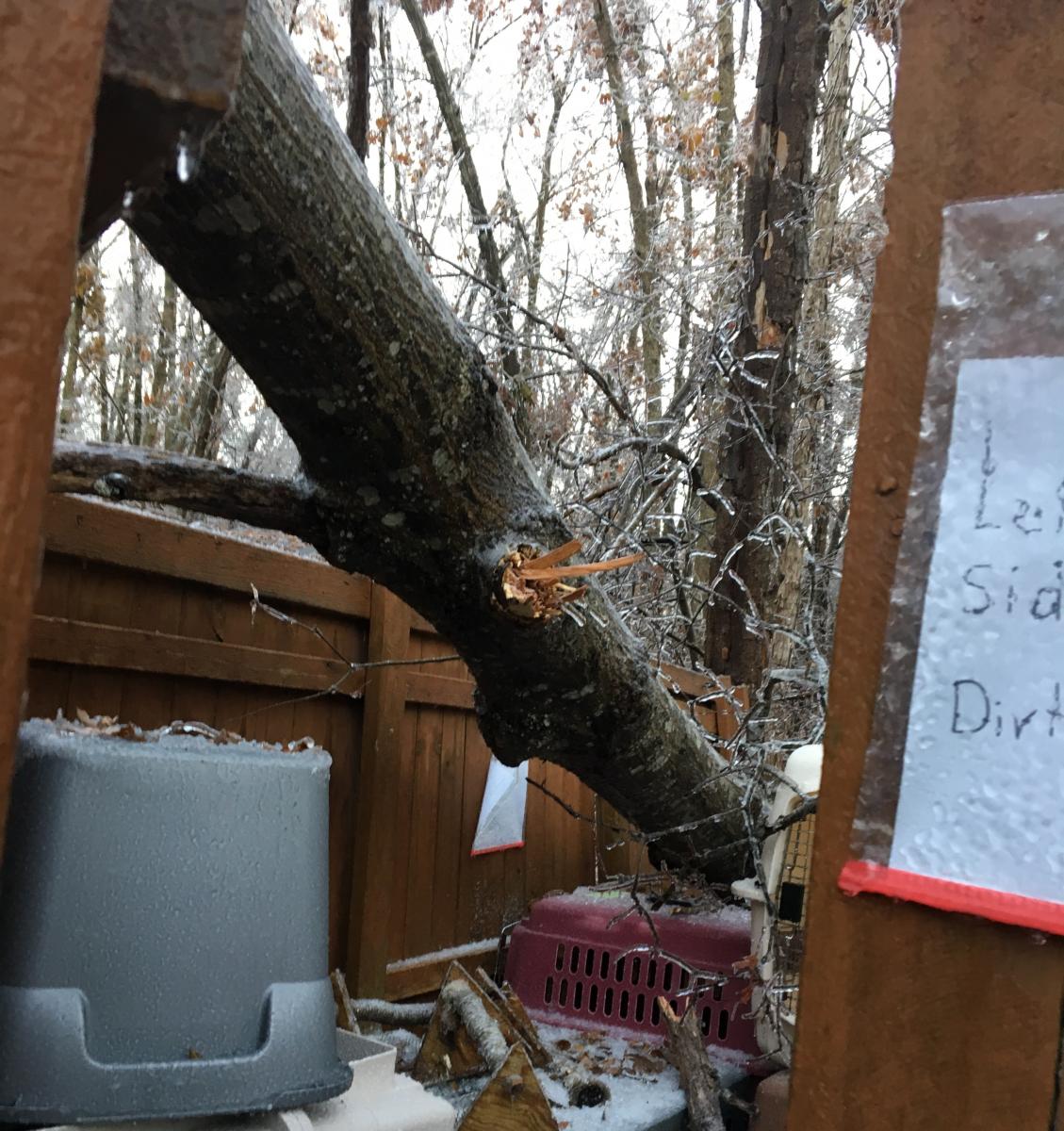 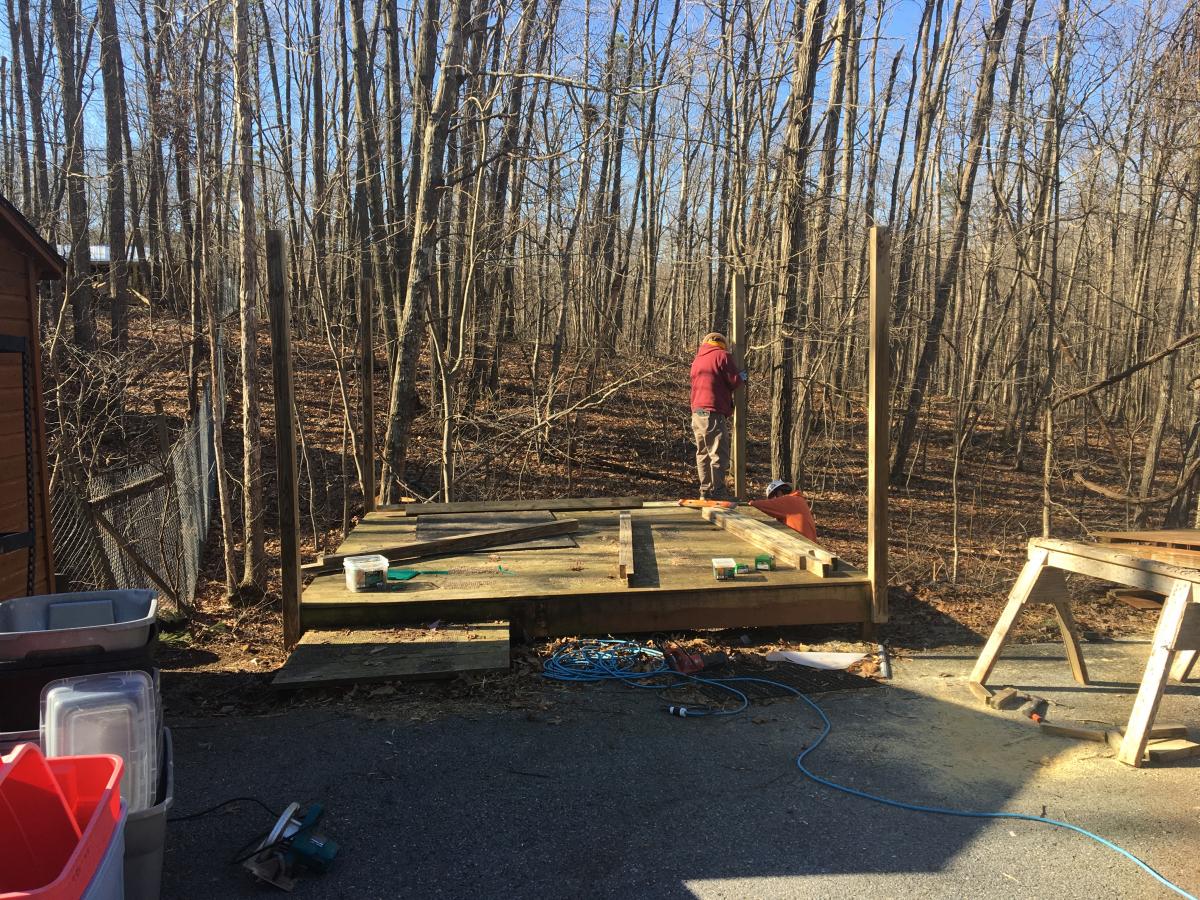 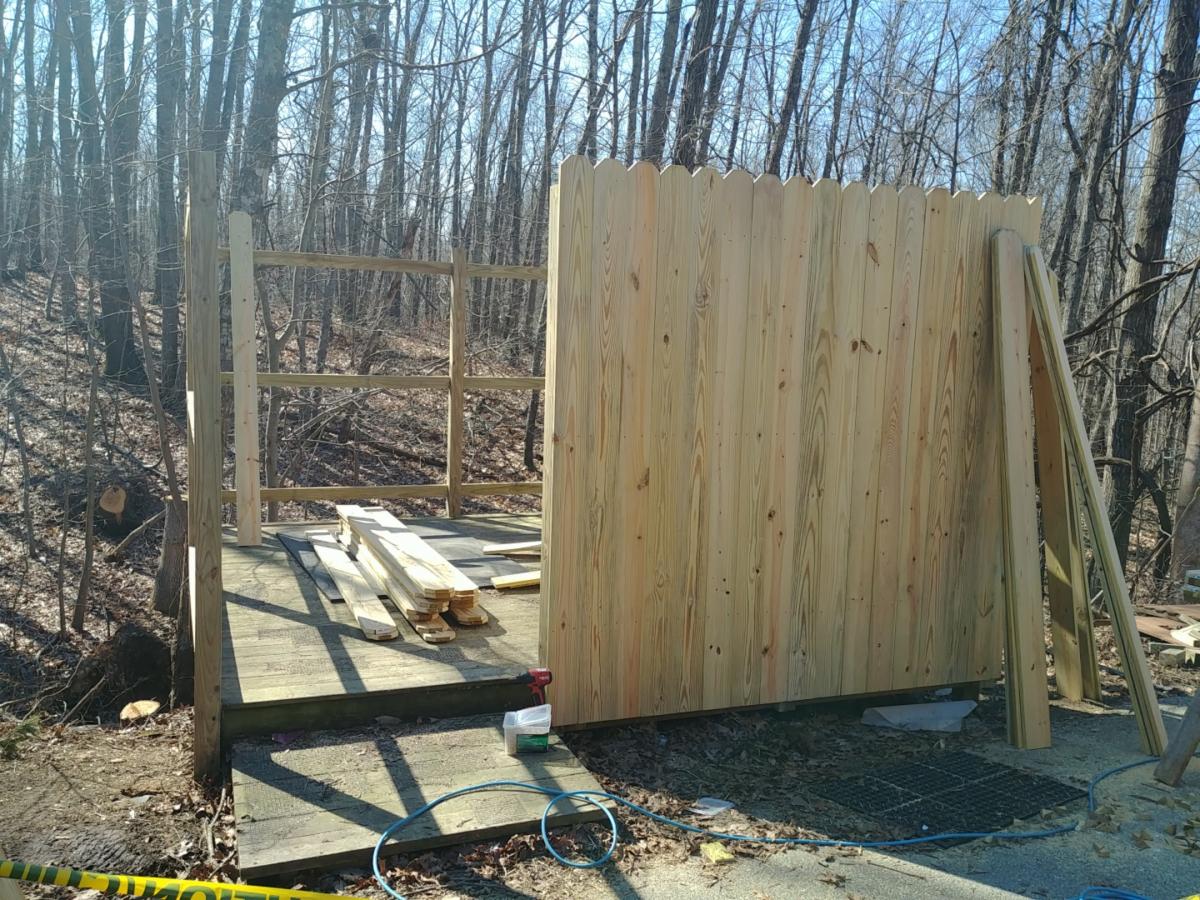 We’re ready to start the next significant step of reconstruction! The Wildlife Center will be working with Lantz Construction Company on a number of repairs and rebuilds from the damage sustained during the November 2018 ice storm. Lantz will start on Monday, February 25; they estimate that if the weather is good and doesn’t provide many delays, they should be done in about six weeks. They will be working on:

The crew will start with the repairs for A1 and A2, in hopes of getting those pens usable within three days.

Before the demolition of the education enclosure begins, the outreach staff will need to move several education birds, including Buddy the Bald Eagle, Gus the Barred Owl, Rosalie the Red-tailed Hawk, Quinn the Great Horned Owl, and Alex the Eastern Screech-owl. These birds will either move to patient enclosures for the next few weeks or may be housed inside and will be put back out in their enclosures on the weekends when work isn’t taking place. Generally, work will be Monday-Thursdays, with Friday reserved as a make-up day in case of inclement weather.