Junior Moves!
December 8, 2011
The Wildlife Center of Virginia introduced the first eagle to the new eagle flight enclosure on Tuesday, December 6. Junior the Golden Eagle, our oldest animal and a venerable member of our education team, was moved to the new enclosure due to the latest ongoing construction project at the Center.
Read More » 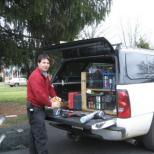 Unwanted Visitor at WCV Student House
December 8, 2011
The Wildlife Center of Virginia encountered some first-hand "wildlife conflict" in early December 2011  when students staying at the WCV student house reported hearing scratches and unidentified mammal sounds coming from the attic.  The student house is rented by the Wildlife Center for the dozens of students that cycle through the Center each year.  The four-bedroom house is in a residential neighborhood within a mile of the Center.
Read More »
Bald Eagle #11-0230, December 8, 2011 update
December 8, 2011

We love hearing how creative teachers are using the Critter Cam and other Wildlife Center information in their classrooms.

Since Mrs. Matheson's fifth-grade class adopted Misty and Gus [two of the Wildlife Center's education Barred Owls], there have been many lesson plans that are centered around the owls. Mrs. Matheson has taken the Wildlife Center's education animal ambassadors' role to a new level by incorporating them into writing assignments, math lessons and quizzes, science lessons, and more.

Wildlife Center Admits 63 Patients in November 2011
December 1, 2011
The Wildlife Center of Virginia admitted 63 patients in the month of November, and to date, has admitted 2,629 patients in 2011. While new admissions are decreasing as the winter months approach, the number of raptors admitted has increased dramatically. Of 63 new patients, 26 were raptors (41%), including nine Eastern Screech Owls, two Cooper’s Hawks, four Barred Owls, and five Bald Eagles. Compare this to October, when 15 out of 112 patients were raptors (13%), and September, when 12 raptors of 203 patients were admitted (6%).
Read More »