On June 17, the Center admitted a juvenile Peregrine Falcon from Richmond, Virginia. The fledgling was found grounded by a restaurant not far from where the Richmond Falcon Cam nest box is located. A Department of Wildlife Resources (DWR) biologist responded to the scene and identified the falcon as “yellow”, one of the Peregrine Falcons that recently fledged from the nest box. Yellow was sitting on the hood of an SUV, and although she did not appear injured, when the biologist approached her she did not resist being picked up or moved. Concerned that Yellow may have an underlying issue, the DWR biologist contained her and transported her to the Wildlife Center of Virginia for an exam.

Staff at the Center were quick to notice the similarities between Yellow’s admission and the admission of Maggie, the Center’s Peregrine Falcon ambassador. Maggie came from the same nest box in 2014, was also admitted shortly after she fledged, and like this falcon, Maggie was also referred to as“yellow” by DWR. Luckily, that’s where the similarities end. During Yellow's exam, the veterinary team did not find any injuries, and a flight test showed that the falcon was capable of flying properly. Though Yellow chose not fly from the ground on her own, the veterinary team decided that it would be better to release Yellow rather than keep her in rehabilitative care and contacted DWR to set up a release date. 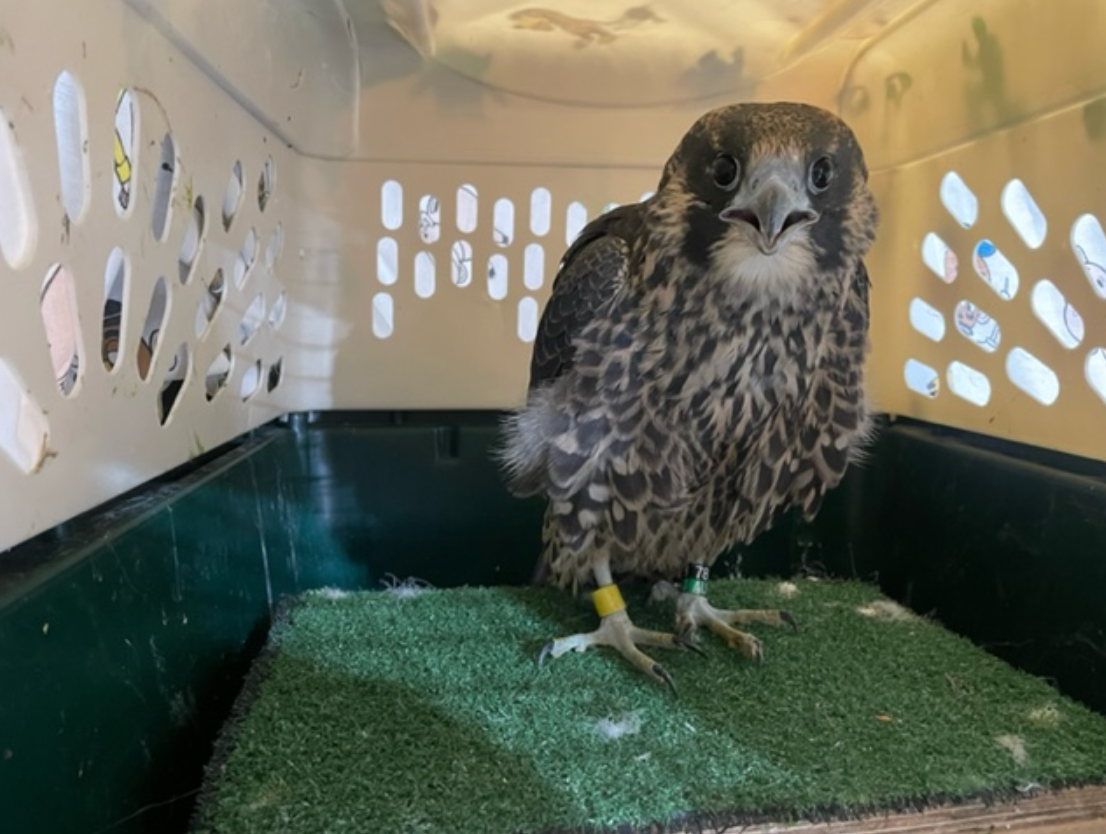 Rather than bringing Yellow back to her original rescue location, staff at DWR opted to release the bird at a hack site in Shenandoah National Park. Hack sites are areas where DWR is attempting to re-establish wildlife populations, in this case, the Peregrine Falcon's historic mountain range in Shenandoah. Not only will this help boost the Peregrine Falcon population in this part of the state, but it will also be much less dangerous for the young falcon since this area lacks the many vehicles, buildings, and other dangers present in Richmond. This hack site will also be carefully monitored by Shenandoah National Park staff during the next couple of weeks, so if an issue is later encountered, staff can attempt to recapture Yellow and bring her back to the Center.

On the morning of June 23, a transporter from the Wildlife Center brought Yellow to DWR staff for release. DWR plans to keep the young bird inside a hack box for 48 hours and provide her meals, then open the box and let the falcon explore her new territory.