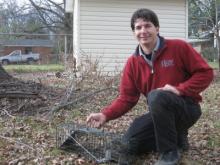 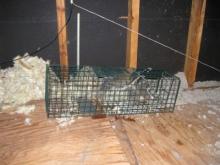 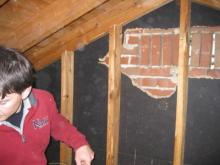 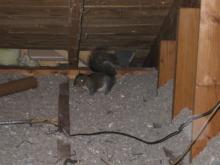 The Wildlife Center of Virginia encountered some first-hand "wildlife conflict" in early December 2011  when students staying at the WCV student house reported hearing scratches and unidentified mammal sounds coming from the attic.  The student house is rented by the Wildlife Center for the dozens of students that cycle through the Center each year.  The four-bedroom house is in a residential neighborhood within a mile of the Center.  The Wildlife Center staff are accustomed to dispensing advice to the public on how to solve wildlife-people conflicts humanely, but we aren’t usually the people to go out and actually do the removal/mitigation work! The Wildlife Center called on local businessman Stephan Nagy, of  Nagy Pest Control.  Some of the Wildlife Center staff have met Stephan before, and he donated his time and expertise to show us how to deal humanely with wildlife in unwanted places. Front-desk coordinator Kate met Stephan at the student house as he prepared for the assessment.  Kate reports: Immediately upon entering the attic, we saw the problem -- the vents at the roofline of the house didn't have any screening around them to keep out any animal that is squirrel-size or smaller.  Then, the culprit was spotted -- a squirrel! A little poking around showed the Eastern Gray Squirrel had made a nest in the insulation near the entrance holes around one of the vents  He had even dragged in some extra straw to pad out his digs!  Stephan said that squirrels usually nest near entrances because they don’t want to travel farther then they have to or risk the chance of getting trapped. You can see the damage to the black fiberboard around the brick vent where the chewing occurred. Stephan went about securing screen wire over the vents at both ends of the attic -- making everything completely squirrel-proof. A live trap was set and baited with peanut butter and we left the attic to look for other potential entrances from outside. The squirrel fell for the bait within ½ hour! Stephan released the squirrel in the back yard of the house.  The proper course of action for those trapping healthy wildlife troublemakers is to release them on-site; DGIF regulations state that you may not relocate mammals off of your property. We had appropriate alternative housing -- a squirrel box -- attached and ready in a nearby tree. Just in case we inadvertently trapped other squirrels inside the attic, we left the live trap set in the attic, and the students agreed to check it twice a day.  No more squirrels were found in the trap -- and no more odd sounds coming from the attic.  Problem solved in about three hours of work!  Thanks Stephan! Looking for advice on what to do if you find an injured or orphaned animal?  Check out our "rescue advice" section of the website!