Many supporters heard of the severe ice storm that struck the Center on November 15. The weather started off with icy conditions that morning; by mid-afternoon, the Center lost power. The trees were weighed down heavily, and limbs and entire trees started falling. With very wet conditions, the root systems of other trees simply gave way.

The first tree to go that day fell on Maggie the Peregrine Falcon’s enclosure – with Maggie still inside. Miraculously, she wasn’t injured – and didn’t attempt escape. Director of Outreach Amanda Nicholson was able to safely extract Maggie from the wreckage. Dr. Ernesto, the Center’s hospital director, began the process of evacuating education animals and patients from their outdoor enclosures and bringing them indoors. 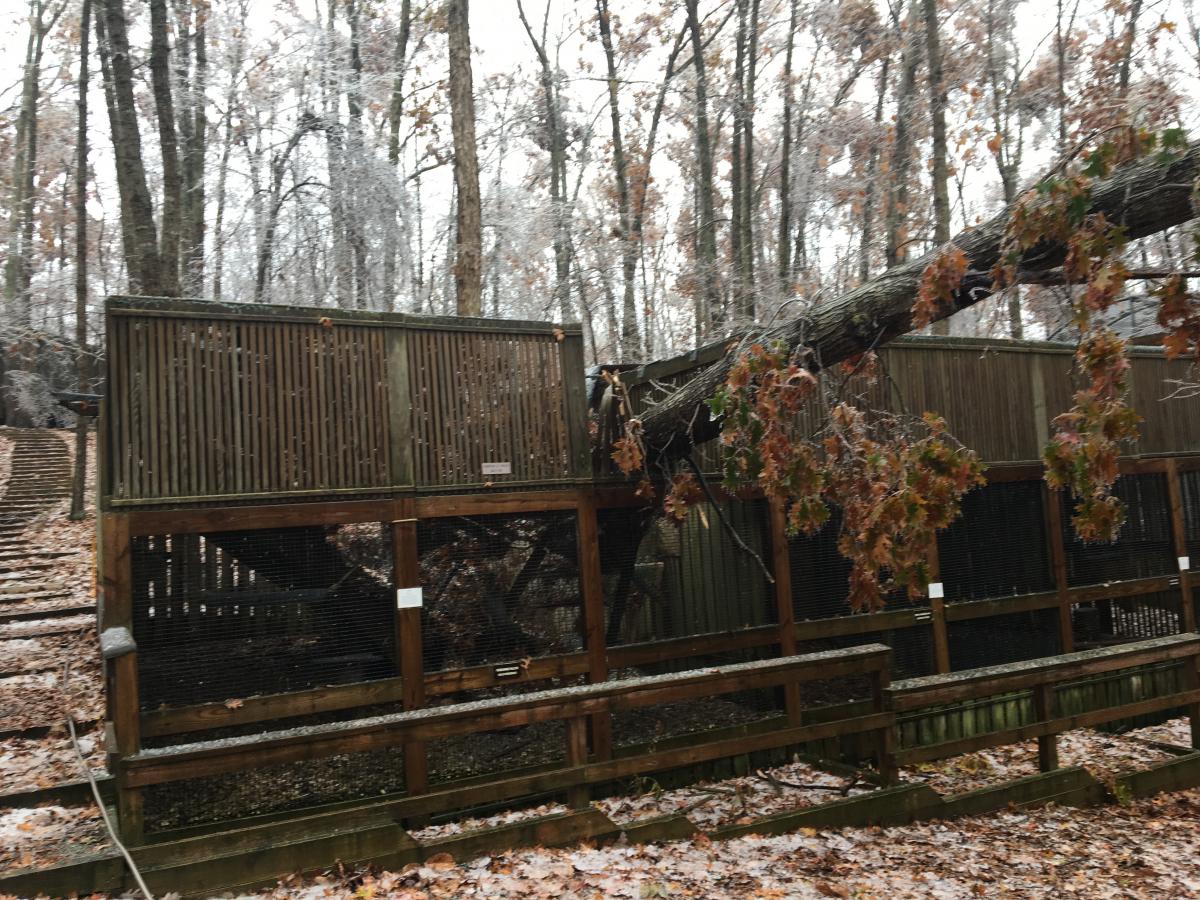 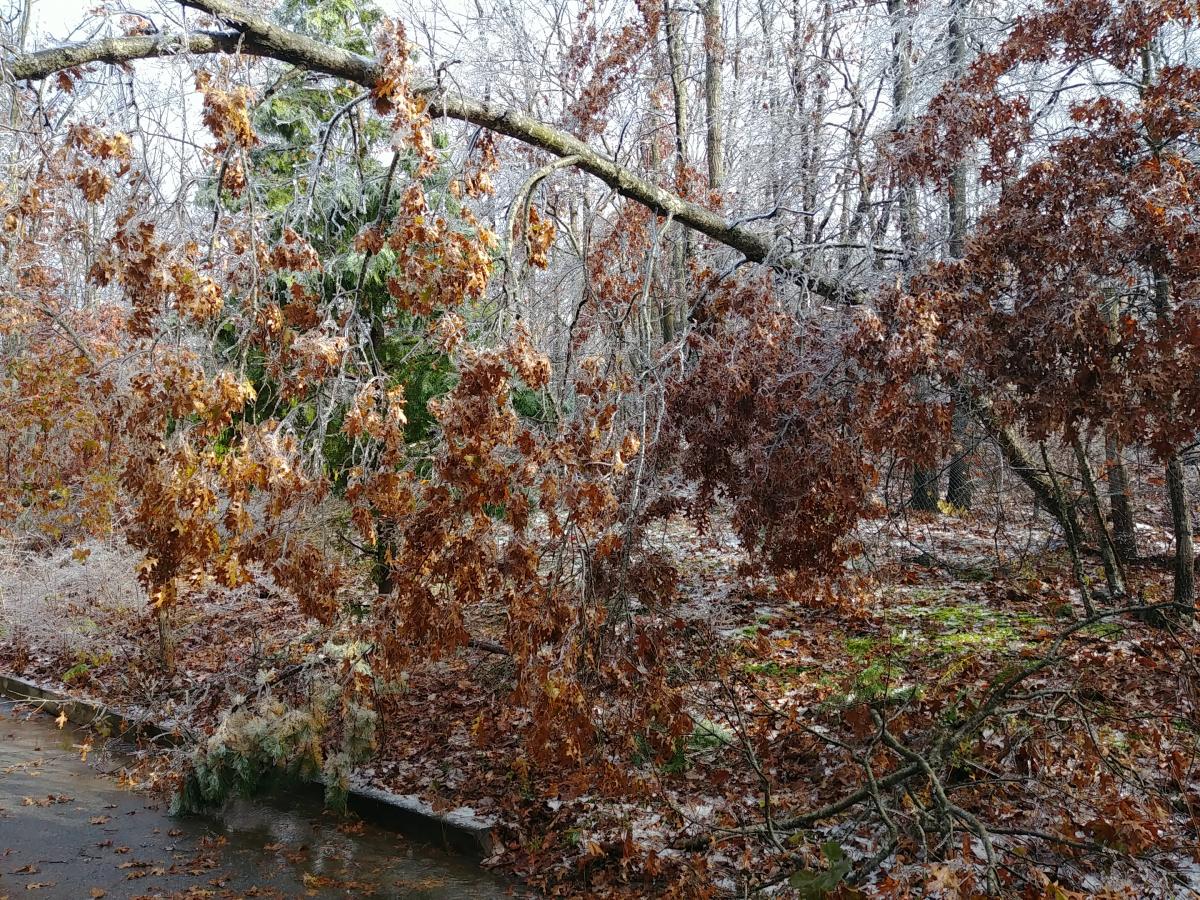 That night, and the next day, trees continued to fall at the Center – damaging a number of enclosures.  The Center remained without power for more than three days. 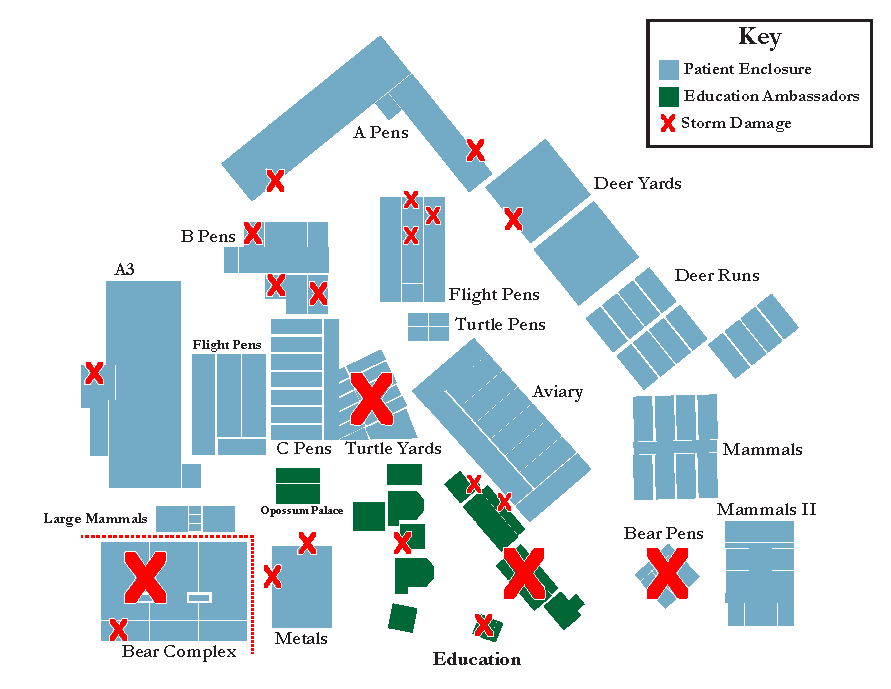 Read Lacy's account of November 15 -- and the days following -- here.

The Center’s hospital is back in operation, and the staff are newly appreciative of heat and light! Many of the downed trees and limbs have been cleaned up, though several very large fallen trees remain behind. A tree service should be at the Center on Thursday, November 29 with cranes and other equipment to extract the enormous tree that crushed Maggie’s enclosure, as well as several other trees that are at risk of falling. 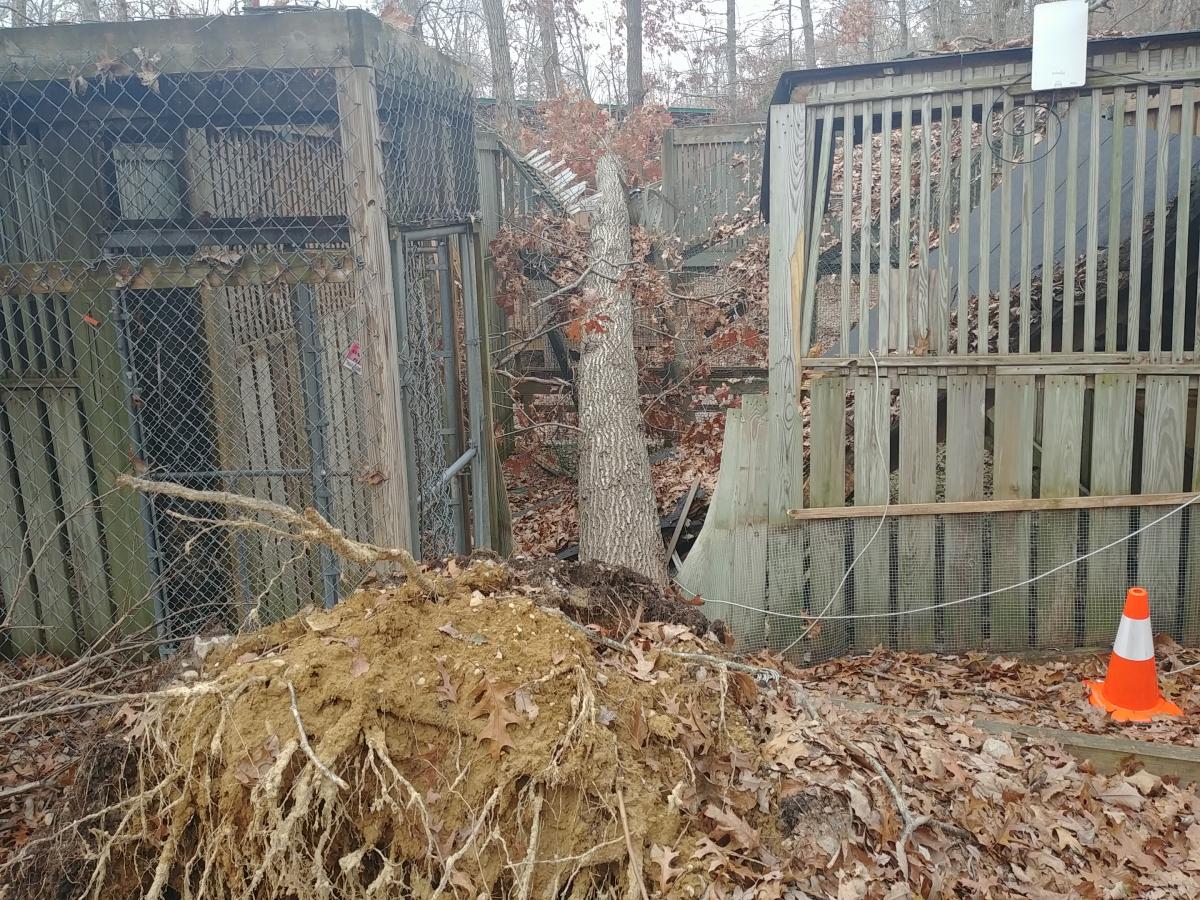 While we’ve been able to return  Buddy the Bald Eagle, Verlon the American Kestrel, and the three Virginia Opossums to their regular outdoor “homes”    our other bird ambassadors are “renting” space in undamaged patient enclosures.

After tree removal is complete, and a full inspection of enclosures is done again, a number of birds may be able to move home:

Some birds will be able to move back home after relatively minor repairs to their enclosures:

Three birds will need to live in patient areas until their enclosures can be entirely rebuilt:

While many things are getting back to normal, we know that it will take months to fully rebuild after this storm.  Thanks for your support – on this #GivingTuesday, and every day!

On November 29, a tree service came to the Center to work on removing a number of very large trees – some of which were beginning to uproot and were leaning dangerously over enclosures and pathways; the other significant tree that needed to be removed was the one that crushed Maggie the Peregrine Falcon’s enclosure.

The crew worked all day and made good progress. They'll return on Saturday, December 1 for additional clean-up in the education raptor area, including removing the large root ball of the tree that fell on Maggie’s enclosure. 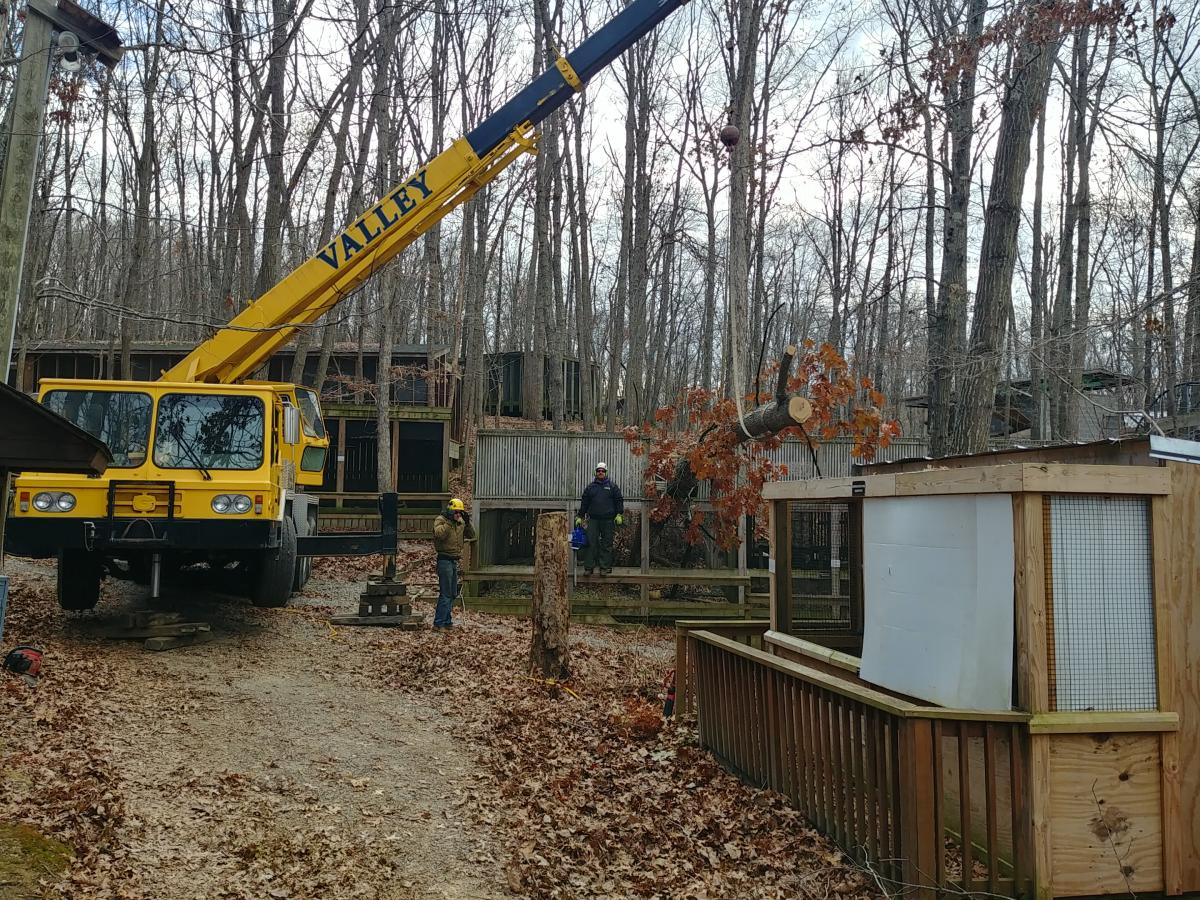 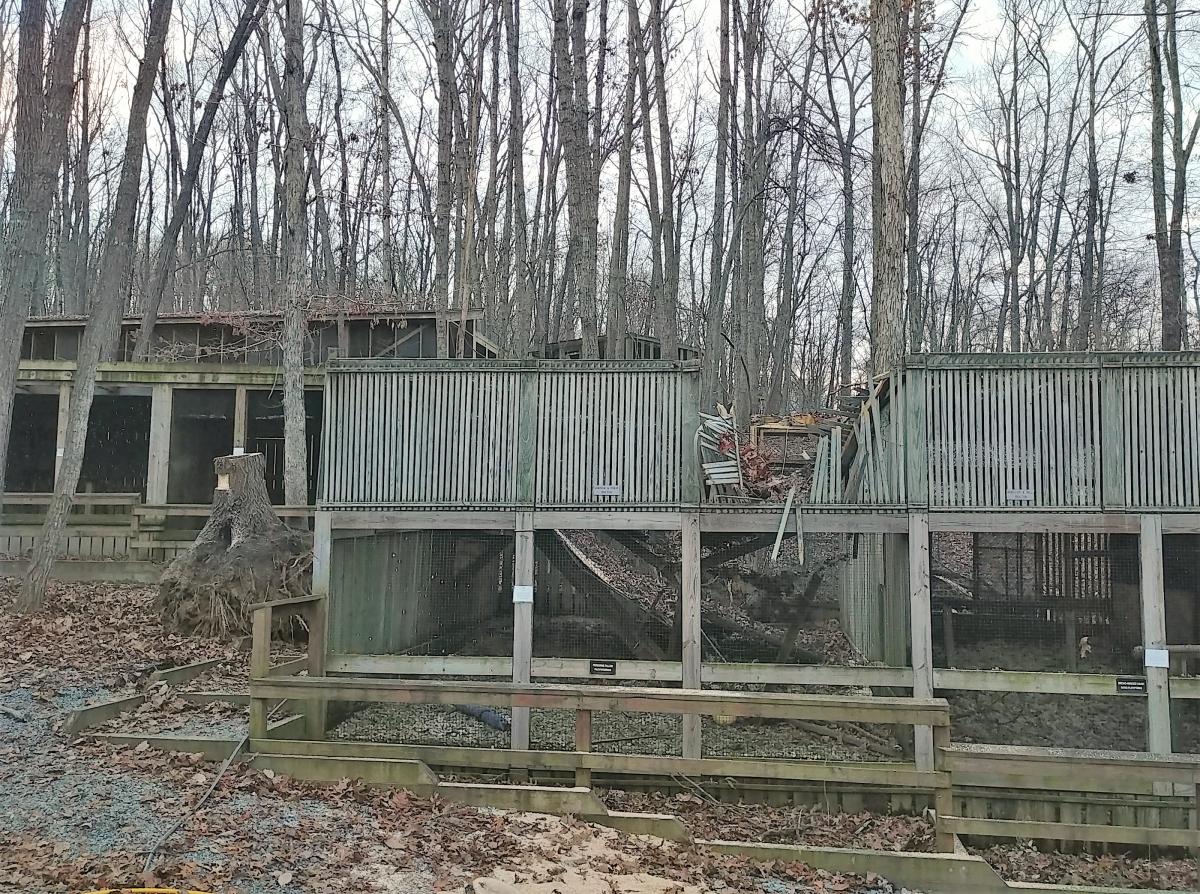 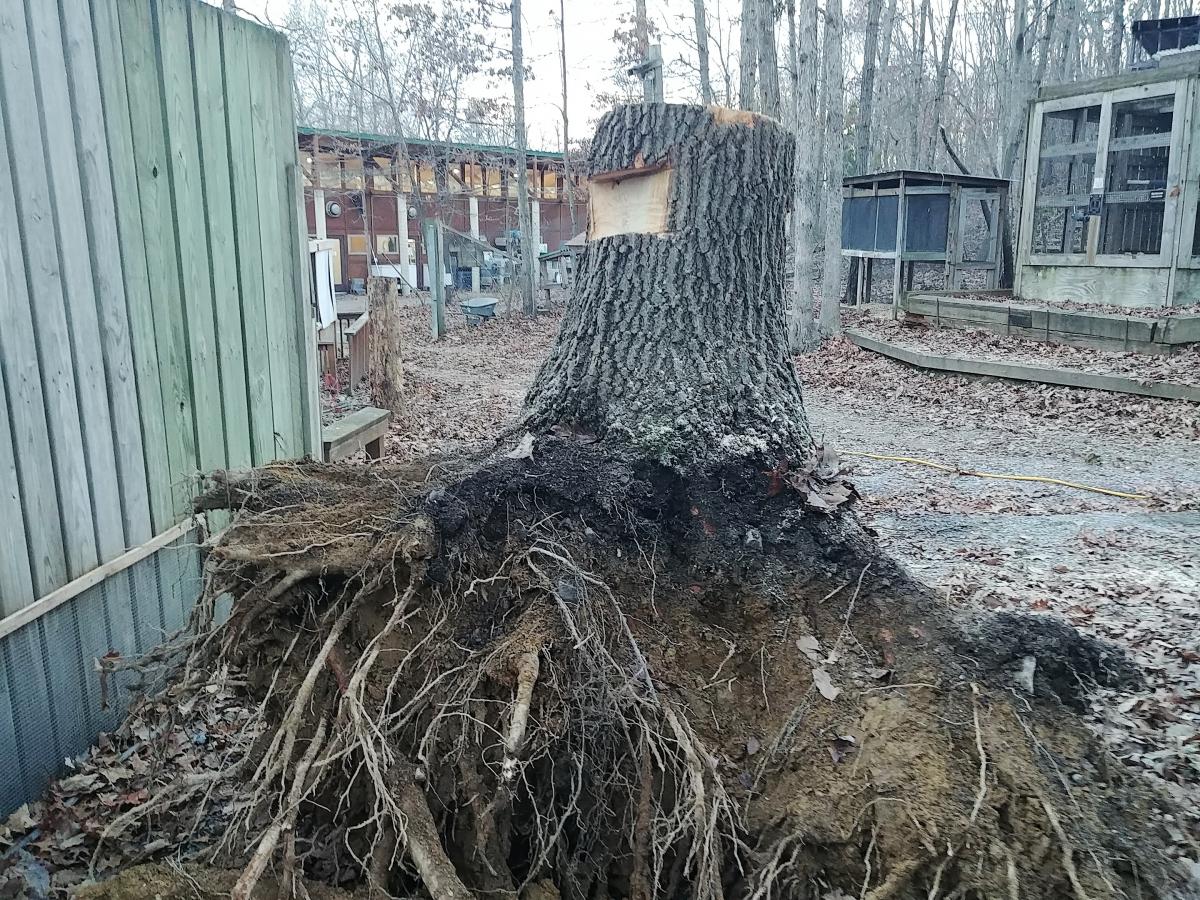 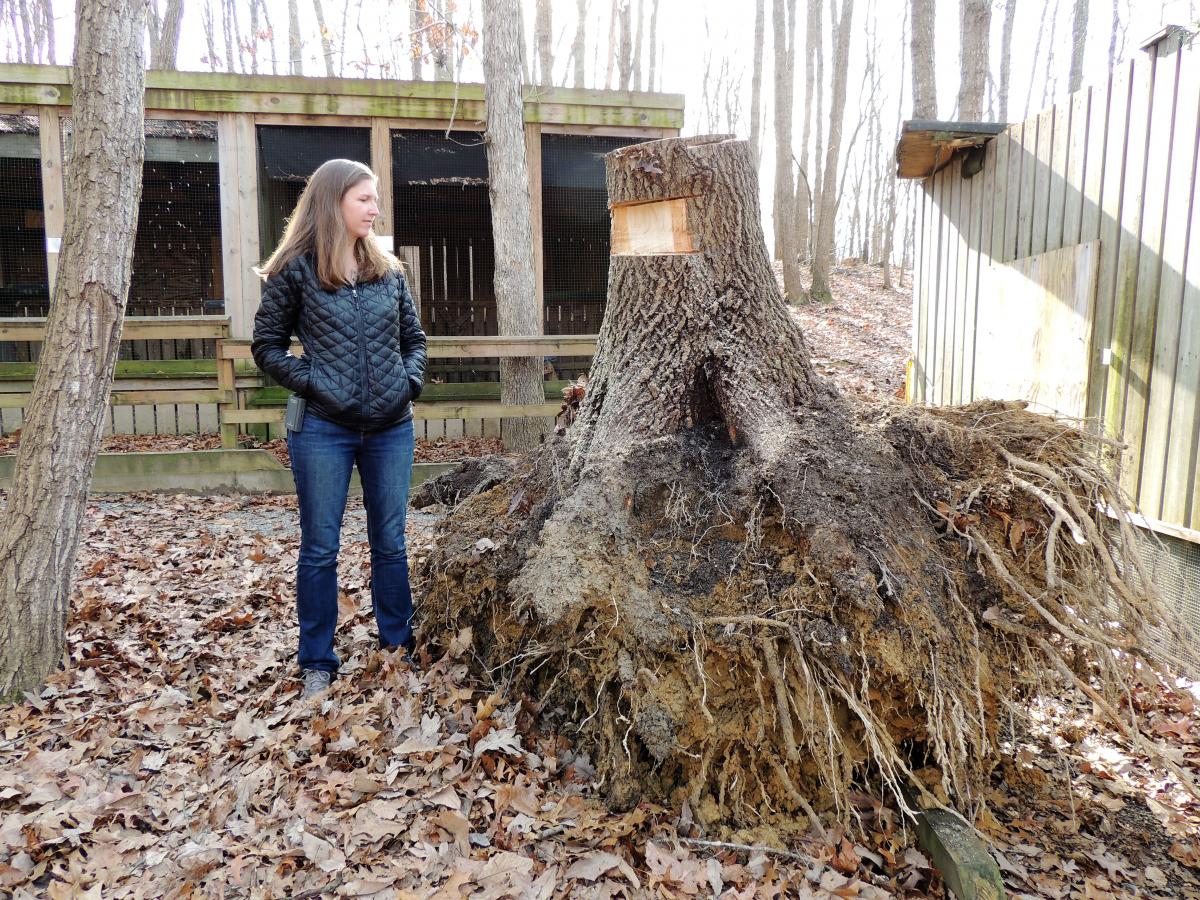 Within the next few days, a number of birds should be able to move back “home”, including Edie, Athena, Jaz, Quinn, Rosalie, Gus, and Hudson.

The Center will be working with a number of contractors during the next week to get quotes on the Maggie/Grayson/Buttercup rebuild and repairs to other enclosures and flights pens. An electrician team will be coming during the week of December 3 to test (and hopefully repair) the hot wire in the Bear Complex.

Clean-up and repair work continue at the Center this week; on Monday morning, a team of electricians came out to work on the electric fencing in the Black Bear Complex. They were able to get the interior hotwire running again, though there are additional problems with the perimeter fence.

The tree service also came out and worked at the Center all day on Monday – they were able to remove the giant root ball of the tree that crushed Maggie the Peregrine Falcon’s enclosure; they also did a lot more work and clean-up around the education bird area, so that the outreach staff could move birds back “home”. Additional trees were trimmed; the ice storm had cracked the tops of many trees, most of which have not yet fallen. The tree service was able to take care of those trees to prevent further damage.

The tree service worked until dark – so not all of the education birds were moved, but Edie the American Kestrel and Rosalie the Red-tailed Hawk returned home! 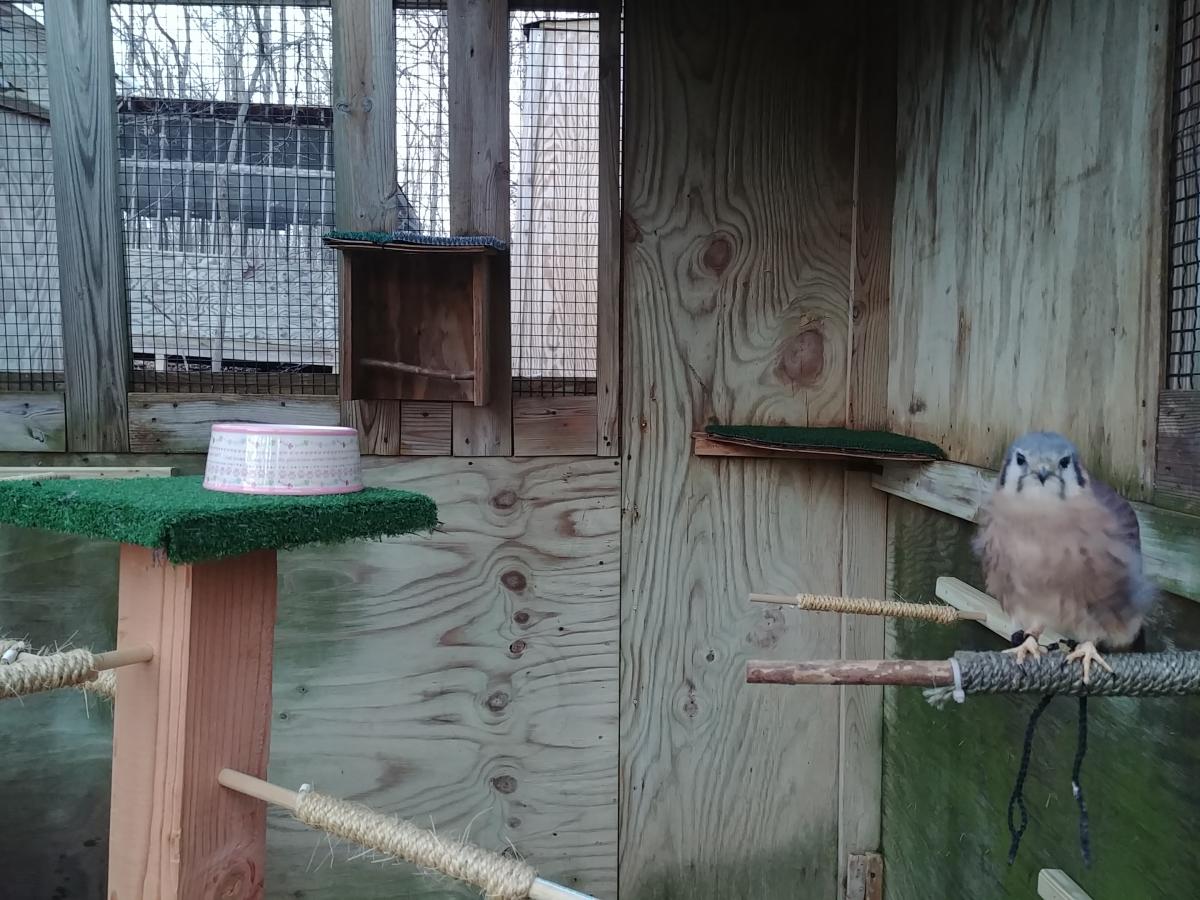 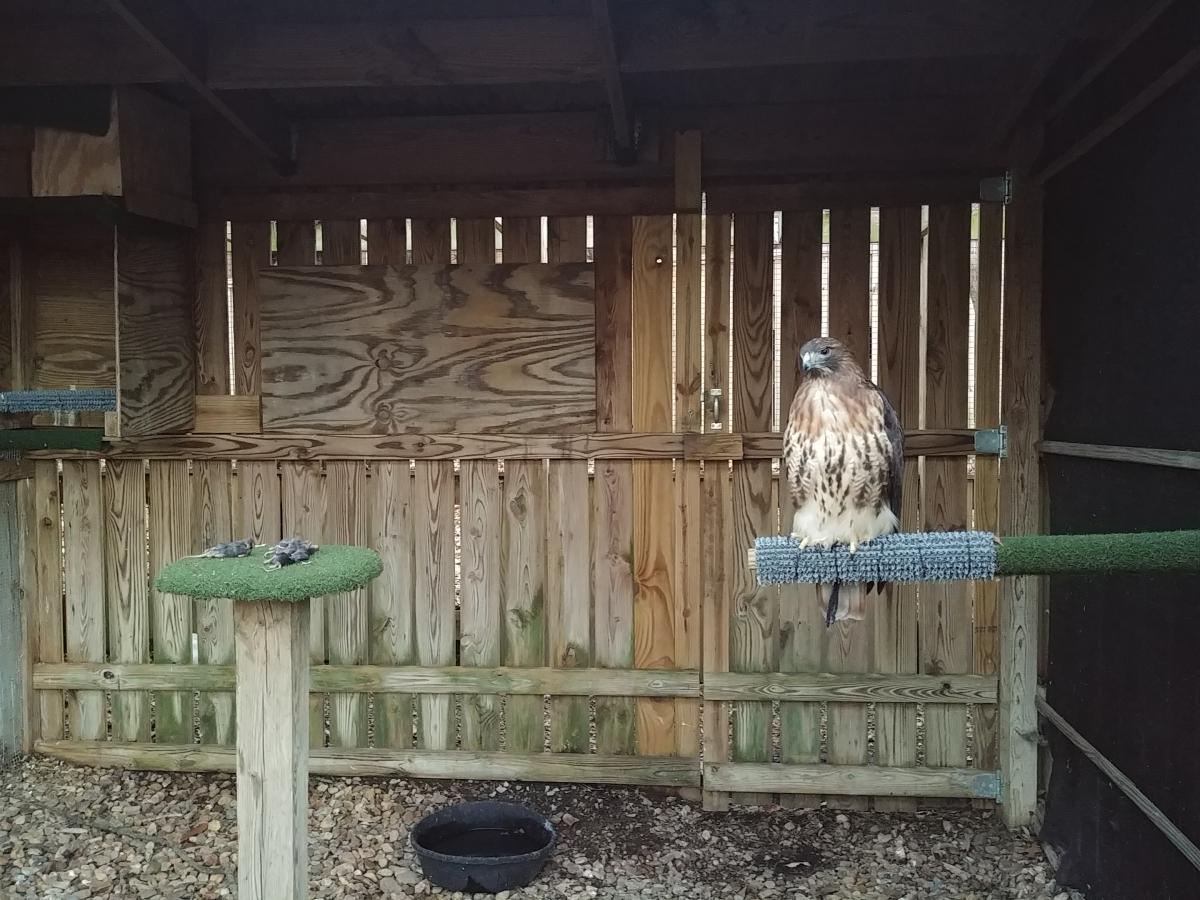 Most of the remaining birds will return December 4 and 5. Alex the Eastern Screech-owl will continue to live in a patient enclosure for the time being – while her enclosure is escape-proof, there is potential snow in the forecast and Dr. Ernesto is concerned about the snow load on Alex’s damaged roof.

On December 18, two volunteers demolished the vestibule and damaged roof of the Bear Pens. With this debris removed, contractors will be able to more quickly and easily make repairs. 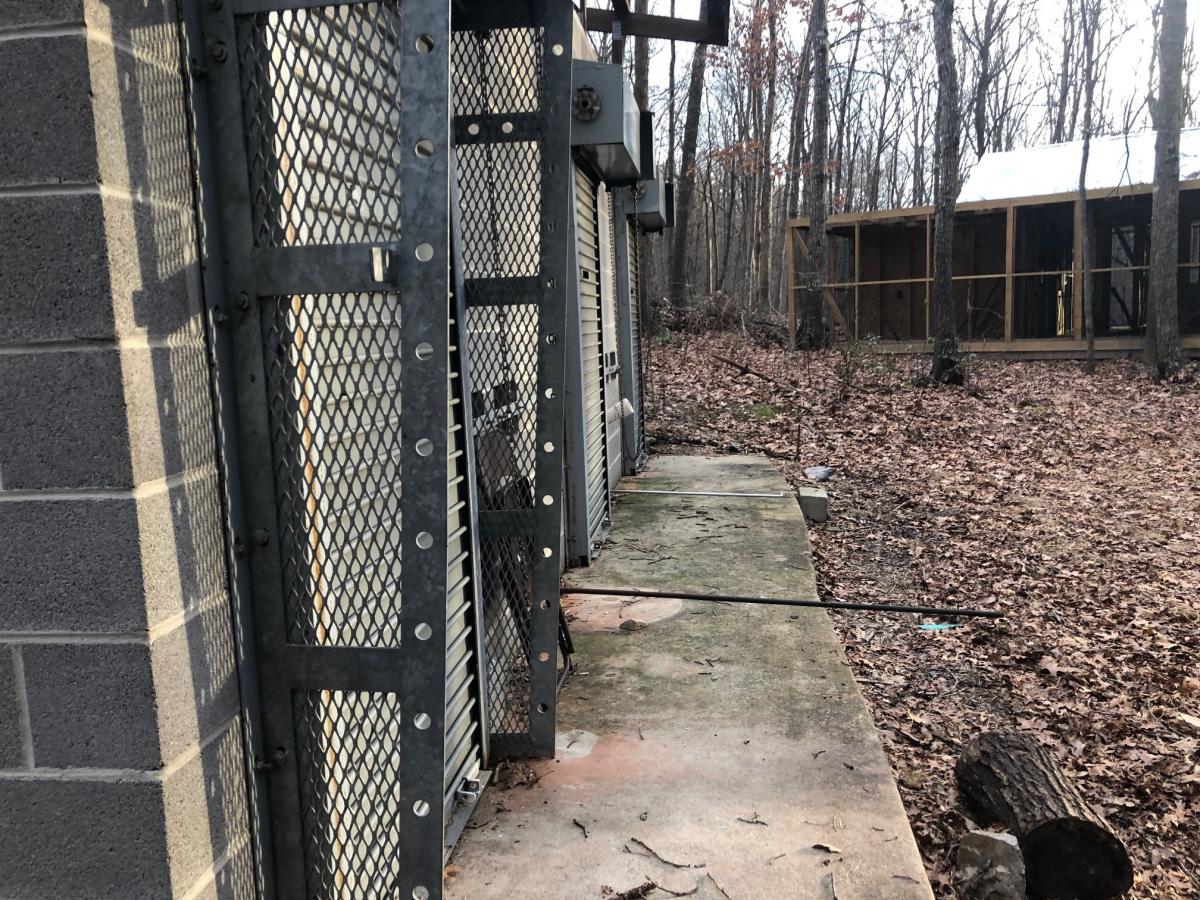 On January 7, volunteers removed some debris from Maggie’s enclosure, which allowed Amanda to retrieve an important perch for the enclosure – Maggie’s “mailbox style” perch. 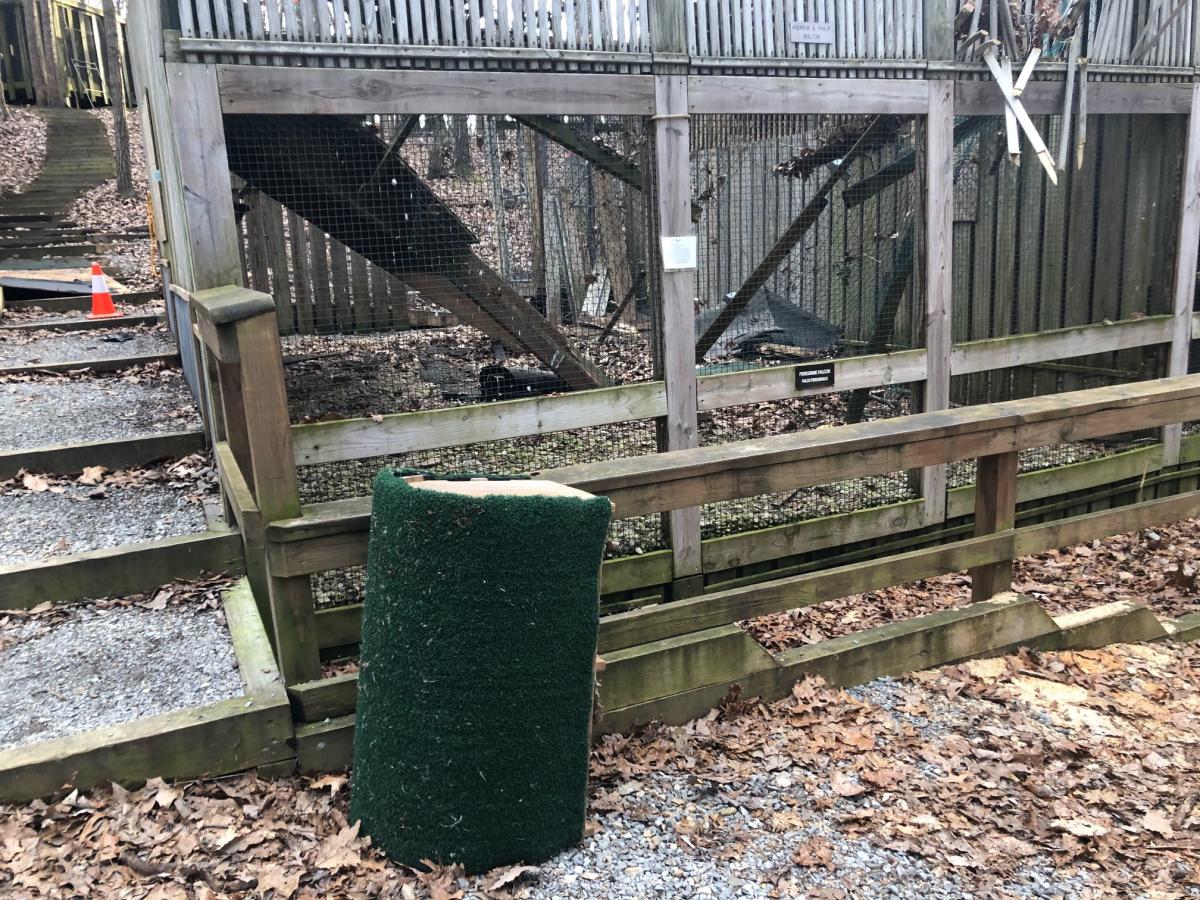 We’re collecting quotes from several contractors and hope to have more information by the end of next week.

We’re ready to start the next significant step of reconstruction! The Wildlife Center will be working with Lantz Construction Company on a number of repairs and rebuilds from the damage sustained during the November 2018 ice storm. Lantz will start on Monday, February 25; they estimate that if the weather is good and doesn’t provide many delays, they should be done in about six weeks. They will be working on:

The crew will start with the repairs for A1 and A2, in hopes of getting those pens usable within three days.

Before the demolition of the education enclosure begins, the outreach staff will need to move several education birds, including Buddy the Bald Eagle, Gus the Barred Owl, Rosalie the Red-tailed Hawk, Quinn the Great Horned Owl, and Alex the Eastern Screech-owl. These birds will either move to patient enclosures for the next few weeks, or may be housed inside and will be put back out in their enclosures on the weekends when work isn’t taking place. Generally, work will be Monday-Fridays.