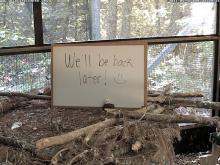 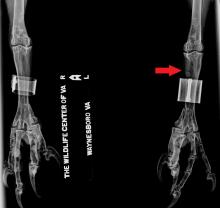 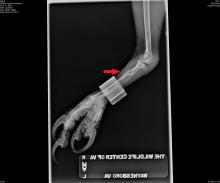 We received word early Tuesday morning that our work crew was able to come out for the day to get the lumber  "staged" and ready for flight pen renovation.

As discussed before, since there would be a fair amount of activity and noise around the eaglets' area, we thought it best to temporarily move them to a more isolated pen. The usual weigh-in crew made their way up to the enclosure shortly after 8:00 am to catch up the eaglets, weigh them, give NV his first lead treatment, and then move them into another enclosure for the day.

When Dr. Miranda, Leigh-Ann, and Suzy first went into the eaglet’s enclosure, they noticed NZ holding her foot up. This appeared to be different than the usual “relaxed” stance that birds of prey sometimes take – and when the WCV crew attempted to capture her, she tried  to hop away while not putting weight on her left leg. This all  happened “cam right” – out on the stair-step branches.

While NV and NX were settled into another outdoor enclosure, NZ was brought into the clinic. Radiographs were taken and Dr. Miranda and Dr. Dave confirmed a small chip fracture on the inside of NZ’s left leg, right above her band. This sort of fracture is not one typically seen in wildlife arriving at the WCV, only because it is a fairly minor injury.

Dr. Dave surmises that NZ ran into something this morning – that this sort of fracture was caused by a blunt force. It’s hard to say what exactly happened, but this is not the sort of injury that she would typically receive from a sibling or becoming entangled. Because there was very little swelling around the fracture site and no bruising, the injury most likely occurred within the past 12 hours.

To give a sense of comparison, this would be equivalent to a person banging a shin really hard on something -- this sort of thing can result in small chip fractures in people too. We know that this sort of injury hurts quite a bit at first, but isn't a devastating injury. If NZ had done this in the wild, she likely would've kept on going -- albeit a bit more slowly for a few days. Since we are able to treat her pain and monitor her closely, we don't see a reason not to do so.

NZ will be housed in a small enclosure for at least the next five days – away from her siblings. Keeping her quiet and rested will be important so that a callous can start to form. She’s received anti-inflammatories and pain meds and no casting or bandaging will be necessary. Once additional radiographs confirm that her fracture is well calloused, she will return back to the pen with her siblings.

In other news, nearly all of the lumber has made it up to the future flight pen. Contractors from Kjellstrom & Lee will likely be in Wednesday to begin putting up the boards in the flight pen. They’ll be donating their time – please join us in thanking them!

Because the eaglets would only have to be moved again Wednesday morning, the vet staff decided not to move the eaglets back in the nest enclosure tonight.  Since the eaglets are becoming more flighted, the staff felt it best to minimize handling if there’s no real need to do so.