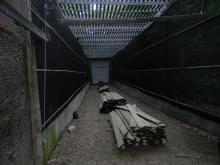 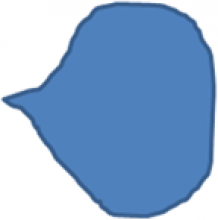 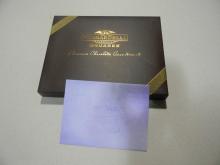 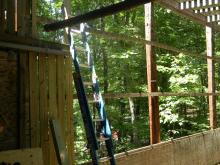 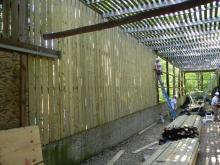 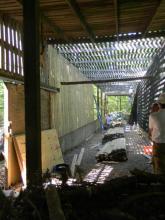 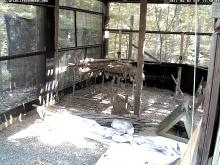 Work has started on the eaglets' future flight pen!  We'll provide a few photo updates here today, so you can get an idea of how things are coming together, and how quickly the crew from Kjellstrom & Leeare working. It's forecasted to be clear and in the 80's both today and tomorrow -- so no rain should get in the way of the plans! A "before" photo:

On a side note, there have been a few questions about the specifics of NZ's small chip fracture. It may be a little hard to understand exactly what's going on with the leg in looking at the radiographs -- in the side view of the leg, it almost looks like there is a "broken toothpick."  Dr. Dave probably spent too much time putting together this explanation -- but it goes into great detail about leg anatomy for those that are interested!

From Dr. Dave: In order to fully assess the fracture, you must look at two different views taken at 90 degree angles from each other. This will help to explain the fracture. I've created two models to help explain the views, then I’ll move to the explanation.

1)      In the side view (lateral), it appears as if there is a “broken toothpick” and the fracture appears as several non-parallel lines. This can be seen in the following model:

2)      By looking at the cranial/caudal view (the x-ray is taken front to back), the fracture appears as an arcing black line and the resulting “free” bone piece is in the shape of a half circle:

3)      Anatomy:  In the location of the fracture, the cross-section of the bone is shaped somewhat like a teardrop with a ridge line running up and down the bone on the medial side (the inner portion of the leg). The fracture runs up and down this ridge and the chip is slightly angled so that it doesn’t line up perfectly with the plane of the ridge. This is a very thin ridge and easily broken.

4)      During the healing process, cells called fibroblasts and osteoblasts produce new callous and bone cells respectively. The callous will help stabilize the fragment until the new bone secures it permanently. Once stabilized, a combination of osteoblasts (make bone) and osteoclasts (breaks down and remodels bones) act according to pressures from the muscles and tendons, to remodel the shape of the bone back to the normal conformation. So despite the fact that the bones don’t look perfectly aligned, this will heal and change back to the normal shape with time.

Hopefully model #3 helps give a better visualization as to how this may have happened -- again, the human analogy here would be smacking your shin into the coffee table. NZ ate her dinner last night, which is good -- sometimes the pain medications can have an affect on appetite. This morning, she was laying down resting in her crate -- we hope she continues to take it easy so that she heals quickly!

Board placement is underway -- after staging all the equipment and tearing down most of the netting, the crew started with a difficult portion of the pen -- one that required some careful measuring around the sliding door to the enclosure.

Progress is being made on the eaglets' flight pen -- the crew will be back tomorrow early to continue!

Kurt, our "tech guy" came out to look at things this afternoon -- since he'll be out of town next week, he wanted to make sure we could safely re-mount the camera for the new view of the pen. After a lot of strategizing -- taking into account what we have to work with in this space -- the camera was re-mounted.

The new view of the enclosure: Additional tweaking will be necessary once the eaglets really start to fly -- and by then, the WCV should have its very own camera as well, which may be slightly different than this particular model. But for the short term -- this will provide a good view of the nest, branches, and area where other perches will be added as the eaglets really start to come out of their old enclosure and venture into the new one.