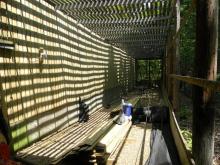 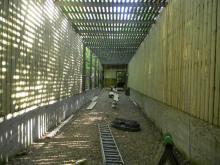 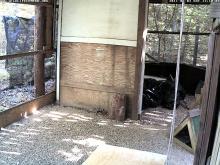 8:24 a.m.
The work crew from Kjellstrom & Lee [Staunton branch] is here bright and early again to start work on the "A-pens" -- where the eaglets will soon be living. It's a nice cool morning here in Waynesboro -- a nice climate for getting some outdoor work done!

Yesterday, our photographer friend Mike Tripp came out to take photos of the work being done -- these are far better than any of the in-house ones we've taken here!

NV's chelation therapy finished yesterday afternoon. He will have another blood draw on Tuesday, June 7 for a lead re-check. The analysis will be done both in-house as well as sent out to another lab for comparison.

11:36 a.m.
NZ is continuing to spend at least some of her time laying down in her crate -- that's what she was doing when she was caught up for morning medications today. Today is her last day of the opioid painkillers -- we'll continue to monitor her closely. Another set of radiographs will be taken on Monday June 6.1:00 p.m.

Friends at WHSV were out earlier today to film a brief clip about the flight pen renovations, as well as the visit from a representative from Air Wisconsin. Tune in tonight to watch -- even if you're out of the area of coverage, they offer the news live on their website!

4:24 p.m.
The Kjellstrom & Lee guys will be back out tomorrow -- Saturday-- and should be able to complete the A-pen project. Special thanks to them to giving up their Saturday for this big project!

In looking at the week ahead -- the eaglets should be able to return to the enclosure early next week. This is for a number of reasons.

Firstly, once the construction is done, the rehab staff will need to get everything cleaned and ready. A number of perches will have to be added in the A-pen for the eaglets as they start to take bigger flights. To give the staff enough time to complete everything [with an already very high case load here], we'll need to give them time on Sunday to do this.

NZ will have another set of radiographs taken on Monday June 6. If a callous is well-formed by that point and NZ is readily standing, she may be able to go back outside at that point.

Another thing that is coming into play is that all three eaglets have started treatment for capillaria. This parasite was recently found in a couple of fecal examinations.

The WCV conducts these routine diagnostic tests on all patients at the Wildlife Center. In the case of three siblings that share an enclosure, a "pooled sample" is taken -- meaning that a few different samples are used in this test. The rehab staff have been trying to collect samples in the past few weeks -- though only lucked out with some "fresh stuff" lately -- hence the recent diagnosis.

Capillaria is a parasite that lives in the digestive tract of its host -- and it's very commonly found in wild birds. Because these birds are in captivity, and we're able to treat -- there's really no reason not to. That way, we can ensure all of our patients are as healthy as possible and aren't shedding the parasite into their enclosures.

The treatment for this parasite is an oral de-wormer and the course of treatment lasts five days. This means that the final day of treatment would be Tuesday, June 7 -- on the next scheduled weigh-in. For that reason, it may be best to return to the eaglets to their enclosure on Tuesday -- but we'll need to reassess how everything is going on Monday and will make a decision then.

5:09 p.m.
Things are coming along! This photo is taken from the far end of A-1, looking back towards the nest-end.

And a shot from the webcam -- just testing things in-house. There is a nice amount of lighting coming in the flight pen -- even at this time of day.