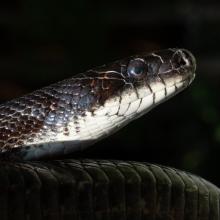 Last month, the Wildlife Center enlisted the help of the public in coming up with a name for a non-releasable Eastern Ratsnake that will soon be traveling to programs as one of the Center’s education ambassadors. News of the ratsnake naming traveled far and wide; within two weeks, the Center received 191 suggestions from 16 different states and even other countries!

Outreach staff narrowed down the 191 suggestions to a list of the “top three” names and discussed which of those names would be the best fit, taking into consideration the snake's characteristics and natural history.  After reviewing the names, a favorite became clear – we've decided to name the snake Allegheny!

Allegheny was suggested by Jessica Marvin of Roseland, Virginia. Jessica's reasoning for name pays homage to the snake's natural history. In Jessica's own words, “Ratsnakes are common all throughout the Allegheny Mountains and it's also a part of their scientific name.” The name Allegheny was also suggested for the same reason by Chapin Coats, a former outreach staff member. Center staff have already grown fond of the name, and occasionally refer to the snake as "Al", for short.

Allegheny came to the Wildlife Center in December 2021. He was reportedly taken from an unknown location in the wild and kept for an unknown period of time before a friend of the snake's former owner intervened and brought him to the Center.  Because Allegheny's original home territory and length of time in captivity are unknown, he is unable to be released into the wild. In summer 2022, the Center's outreach team evaluated Allegheny's suitability as an education ambassador and decided that he would be a good fit for the team, based on his temperament and personality. As an ambassador, Allegheny will appear in a number of educational programs, both online and in person. His first public appearance will be at the Center's upcoming Annual Gala.