ClarkFest: The Music That Inspired a Life’s Work in Conservation

On Sunday afternoon, June 5, the Wildlife Center of Virginia will sponsor Back Home Again — A Tribute to John Denver, at the Wayne Theater in Waynesboro, featuring Tom Becker, a former member of the New Christy Minstrels, and the Waynesboro Symphony Orchestra. The concert is part of a weekend-long series of celebrations and events sponsored by the Center. According to Ed Clark, the Wildlife Center’s President and Co-founder, this event is not just another fundraiser, it is also the celebration of something very special and meaningful in his life and career – the music that has inspired him.

When one thinks of inspirational music, perhaps some patriot anthem or military march comes to mind, or maybe a soul-stirring hymn, raised by the choir. For Clark, his musical inspiration over the last 45 years has come from his musical muse and his friend – pop music superstar John Denver.

“It sounds trite to say that some singer or certain songs have had an influence on your life, but I have to say that John Denver’s music has been the soundtrack of my life and my career,” Clark said. Clark, who will be celebrating his 65th birthday on June 4, was not just another fan of Denver’s music; he actually knew the singer and worked with him on many conservation issues throughout the 17 years of their acquaintance, before Denver’s untimely death in the crash of a small plane in 1997.

“One of the greatest disappointments in my life,” explains Clark, “is that I cannot sing! And when I say that ‘I cannot sing’, I’m not talking about singing badly. I’m the kid who got kicked out of the children’s choir in church – literally! When I sing in the shower, the water shuts off!” In spite of his vocal challenges, Clark has always loved music, even learning to play the guitar and banjo during his 20s and 30s – “though not very well”, he confesses. “Had I been able to sing, the songs I would have sung were mostly those written and recorded by John Denver. While most popular music of the period seemed to focus on the drug culture or dropping out of society, John was singing about what I was feeling – a connection with nature. He was singing for me.” 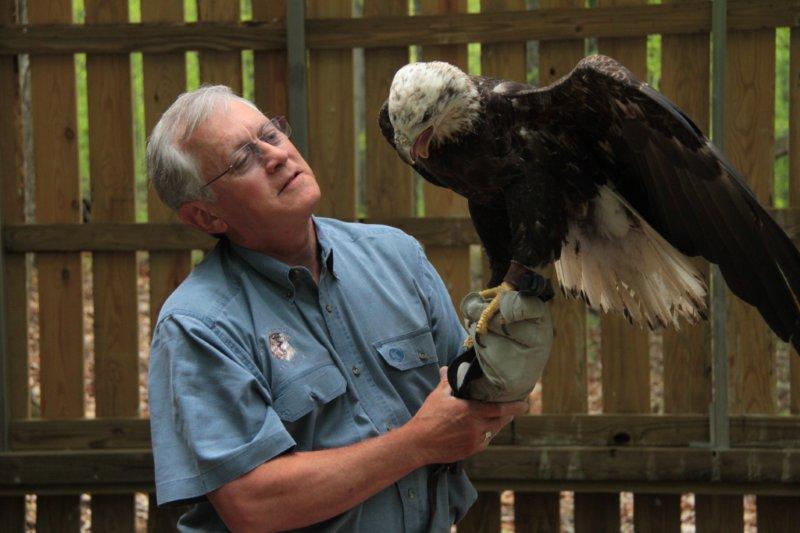 Clark, a graduate of Bridgewater College, always intended to go to law school, “right up until the moment when I got accepted; I just could not make myself go. When I realized that I was going to have to find another path, I started teaching at the Virginia School for the Deaf in Staunton.” It was during his years as a teacher that Clark first got involved in conservation advocacy, becoming a leader of the Virginia Wilderness Committee, a grassroots organization working to protect Virginia pristine forests and mountainous areas in Virginia’s National Forests. “It quickly became clear to me that I had found my calling, but I could not see a way clear to actually make a living in the field,” recalls Clark.

“While many of John Denver’s songs meant a great deal to me,” explains Clark, “it was the opening verse of John’s popular song Rocky Mountain High that finally convinced me to take the leap, abandon my graduate studies and teaching job, and dedicate my life to the protection of wild things and wild places. It felt like these lyrics were written for me!”

He was born in the summer of his 27th year
Coming home to a place he'd never been before
He left yesterday behind him, you might say he was born again
You might say he found a key for every door

Indeed, Clark was 27 years old when he left teaching and the Valley, returning to his hometown of Flint Hill, Virginia, where he launched a career in conservation that has now spanned nearly four decades – “so far”, Clark is quick to insert. “I’m not done yet; there are a lot of things I still want to do before even considering retirement!”

In 1980, shortly after Clark started his professional conservation career as the first Executive Director of what is now the Virginia Conservation Network , he actually got to meet John Denver and his wife, Annie. During the late 70s and early 80s, there was a major legislative battle in Congress over the fate of federal lands in Alaska. Clark was the Virginia Coordinator of the Alaska Coalition, the network of individuals and organizations advocating for protection and preservation of these lands. Denver was a celebrity spokesman for the campaign.

On a brutally hot summer day in August 1980, President Jimmy Carter hosted a reception at the White House for leaders of the Alaska campaign, recalls Clark. It was there that he first met John Denver. “John had written so many incredible songs about nature, and had spoken so eloquently about Alaska during his concerts and in interviews. He was one of the most highly visible and influential advocates for wilderness anywhere. And, he was also a really nice guy,” remembers Clark. “Being a guest at the White House was fine, but it was meeting John Denver that really made me feel, for the first time, that I had actually arrived on the conservation stage — that the path I had chosen for my life was the right one.”

Clark’s interaction with Denver continued for many years, as they both became involved in a variety of conservation organizations and issues. Denver was a strong supporter and spokesman for the National Wildlife Federation, an organization with which Clark was associated for 22 years, eventually serving as Vice Chair of the board.

Both Denver and Clark considered legendary undersea explorer Jacques Cousteau to be a personal hero. Denver wrote one of his most popular songs, Calypso, while aboard Cousteau’s research ship of the same name, and did a television special about the urgency of protecting the world’s oceans. Clark proudly displays on the wall of his Wildlife Center office a letter he received from Cousteau in which the explorer thanks Clark for his warm welcome when the Cousteau Society moved its U.S. headquarters to Virginia. Years later, after becoming a Master Scuba Diver himself, Clark helped two of Cousteau’s grandchildren launch an organization to continue the work of their famous grandfather. Clark became the founding Secretary of the Philippe Cousteau Foundation, which was named after Jacques Cousteau’s second son who was killed in the crash of a seaplane. The organization’s name was eventually changed to Earth Echo, but continues to advocate for ocean conservation under the leadership of Cousteau’s grandson, and his father’s namesake, Philippe Cousteau.

“I think of myself as a relatively articulate guy,” concedes Clark, “but nobody could express what it feels like to really connect with nature like John could, through his lyrics and music. When I would get discouraged at what often felt like overwhelming forces hell-bent on destroying the natural world, I would put on John’s music, be reminded of why I do what I have chosen to do with my life, and rejoin the battle, renewed and re-energized.”

Clark’s 40-year career in conservation (so far) has taken him to nearly two dozen countries worldwide and has included leadership positions in a wide variety of organizations. He has been recognized through countless awards and accolades. “It’s not about me,” demurs Clark. “We all have our mentors and inspiration. I have the most wonderful team of colleagues, friends and supporters who continue to inspire and sustain me today, but John really got me started. I just hope that I can help others engage with the natural world in the way that John Denver helped me – but it darn sure won’t be by me singing to them!”

Clark remembers the day in October 1997 when news of John Denver’s death was reported. “It was like losing a part of myself … a source of my inspiration … my friend.”

Among Clark’s other musical friends is singer Tom Becker, who will perform the John Denver tribute concert. Becker, also from Colorado, is a former member of the New Christy Minstrels. Accompanied by his band, which includes his wife Michelle, and backed by the Waynesboro Symphony Orchestra, Becker will bring Denver’s music and magic back to life. “I am so delighted that we have finally been able to schedule this concert,” beams Clark. “Tom Becker does an incredible job of not only interpreting John Denver’s songs but also channeling John’s energy and passion into his own original music. I can’t wait to share this with all of our friends and supporters in the area.” The concert will be recorded by the local PBS affiliate, WVPT, for inclusion in a television special later this year. “We really hope to fill the house!”

General admission tickets [at $35/$25 each] are available from the Wayne Theater Box Office.

Note to the Press: Photos of patients treated at the Wildlife Center, and images related to ClarkFest events, are available. Please contact Randy Huwa at 540.942.9453 or at rhuwa@wildlifecenter.org.