At any given point during the year, the patients at the Wildlife Center of Virginia reflect the natural ebb and flow of the seasons. Winter brings in species that may have had their natural hibernation or brumation cycles disrupted. Tens of hundreds of baby birds, cottontails, and opossums arrive at the Center in need of care during the spring months. Patient admissions generally slow down during summer, but not for long -- autumn signifies an important time for many wild birds in North America: time for migration!

Most wild animals will alter their behavior in some way during the fall and winter months. As a colder climate slowly sets in, easily accessible and reliable food resources diminish, daylight hours decrease, and weather extremes may be difficult to endure. Some native species are well-equipped to deal with these conditions, but others – primarily raptors and songbirds -- take a different approach. Each fall, billions of birds in North America take to the skies during their annual migrations seeking various combinations of warmer climates, better food availability, a lack of natural predators, or other resources. In the simplest terms, migration involves moving from areas where resources are scarce to areas where resources are plentiful.

As the American Bird Conservancy describes, “On cross-country flights, migratory birds gravitate toward efficient paths with plenty of rest stops. Some species stick to the coasts, while others plot courses over inland wetlands or follow lengthy natural features like the Mississippi River or mountain ranges. (Even when weather causes them to deviate, their navigation abilities usually help them wind up at the same place each year.)”

Here in Virginia, migratory birds usually pass through our area along one of these predictable geographic ranges known as the Atlantic Flyway. Bordered by the Atlantic Ocean to the east and the Appalachian Mountains to the west, this migration “super highway” stretches the entire length of the eastern United States and Canada. 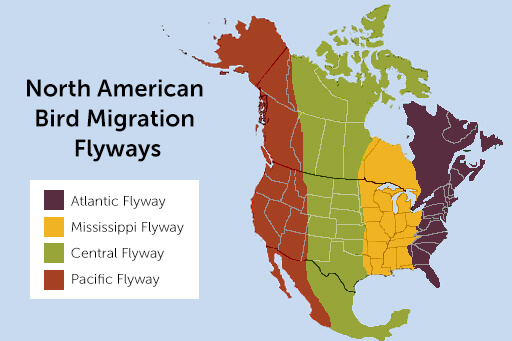 The Wildlife Center’s location in Waynesboro, Virginia means our facility is situated at the heart of this route – it also means that during this time of year, migration is on the minds of our veterinary and rehabilitation staff!

As Wildlife Rehabilitation Supervisor Kelsey Pleasants describes in Untamed, Season 2 Episode 8: "Migration", “During migration season we see a higher variety of species here at the Center. We see a lot of Broad-winged Hawks, as well as Nighthawks, which are a part of the Nightjar family, Ruby-throated Hummingbirds, and a lot of species of Warblers. These guys are coming in for a lot of different reasons, such as being hit by cars, flying into buildings or windows, or being what we call a failure to thrive [a young adult or juvenile who isn’t successful during their first year of independence].

When we have migratory species in rehab, we have to keep the timeline of the rehabilitation plan first and foremost in our brains, it’s the most crucial part. So, they’re here coming through either heading south or heading north on their migration routes depending on what time of the year it is. And especially that fall migration, the migration route that’s headed south, it’s really important that we release them on time. There’s a definitive window of time where they have to catch that flyway down south and be able to go from a place that’s lacking resources to a place that’s plentiful in resources for them to thrive. We have to make sure that they’re released in time to be able to catch that group headed south.”

Some of these species are currently being cared for at the Center, including a Broad-winged Hawk, a Ruby-throated Hummingbird, and until recently, a Mississippi Kite.

As our veterinary and rehabilitation staff work tirelessly to give these patients the best possible chances of survival, consider the following tips to help migratory species yourself: