Each year, the Wildlife Center admits a variety of wild animals affected by mange. We also receive many phone calls about animals who appear to have this disease. Mange is currently the subject of much research in the wildlife world; learn more about this emerging disease and the Wildlife Center’s research on mange treatment.

Mange is a contagious skin disease caused by mites. There are a few different types of mange, each caused by a different mite species. 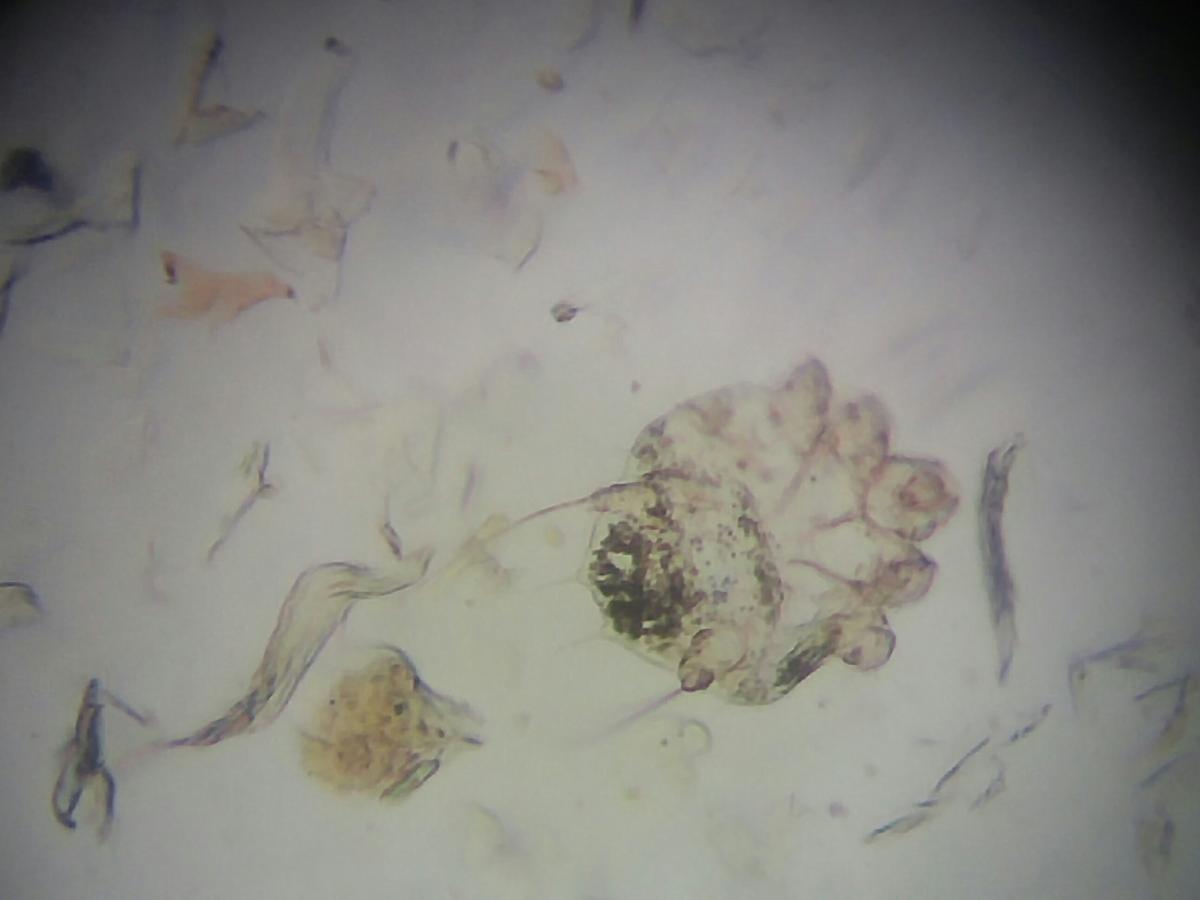 Sarcoptic mange, caused by the Sarcoptes scabiei mite, is the most common. These mites burrow into the outer layer of an animal’s skin and form tunnels. Female mites lay eggs within the tunnels; within three days, larvae hatch and either move in the tunnels, or move to the surface of the infected animal’s skin. Within days to weeks, the larvae develop into nymphs, which then develop into adult mites – ready to repeat the cycle. Manage treatment can be difficult since larvae, nymphs, and adults can all be living on the same host in different life stages.

Demodectic mange, caused by Demodex mites, is less commonly seen in wildlife but is often seen in dogs. This species of mite inhabits hair follicles and can be regularly found on animals. In a healthy animal, low numbers of these mites cause no symptoms and are simply a regular part of normal skin microfauna. In immunocompromised animals, the mites quickly multiply and can cause hair loss and severe illness.

Audycoptic mange, caused by the Ursicoptes americanus mite, is a bear-specific mange. This disease is similar to sarcoptic mange, but only affects bears. Secondary skin infections typically aren’t quite as severe as in sarcoptic mange cases.

What animals are affected? 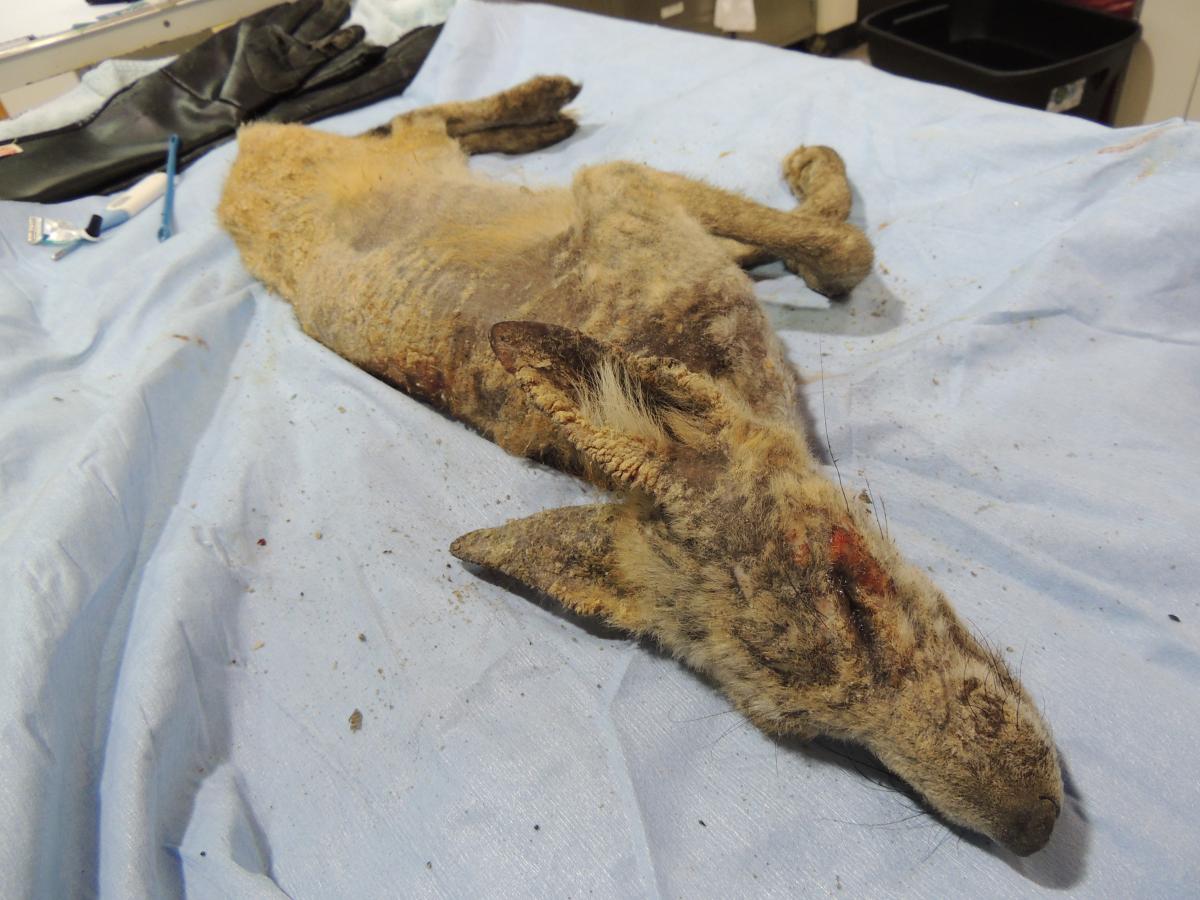 Mange affects a variety of mammals – most notably foxes and other canids, bears, coyotes, rabbits, squirrels, and raccoons. Sarcoptic mange is a zoonotic disease – domestic mammals and humans can also contract the disease: depending on the type of mange and the species of the host, some infections may be self-limiting.

Mange is an emerging wildlife disease and the focus of many studies. Sarcoptic mange, in particular, is being reported in new geographic areas, in increasing numbers. Virginia has noted a significant mange issue in Black Bears in the Winchester area; Pennsylvania is also noting an increase in affected bears. Biologists and researchers are working toward learning more about this disease.

Can humans get mange?

How is mange spread?

Mites are transferred to new hosts when the affected animal comes into direct physical contact with others. Larvae and nymphs may also fall off the host animal and can survive in the environment for several weeks. If an uninfected animal encounters a contaminated environment (e.g., moving into a shared nest or den), the mites can infect the new animal.

It’s important to note that some animals are exposed to mange mites and do not show any signs of infection; why certain animals are more affected is a subject of current research. Factors include host species, mite variety, and general host health and immunity.

What are the symptoms of mange? 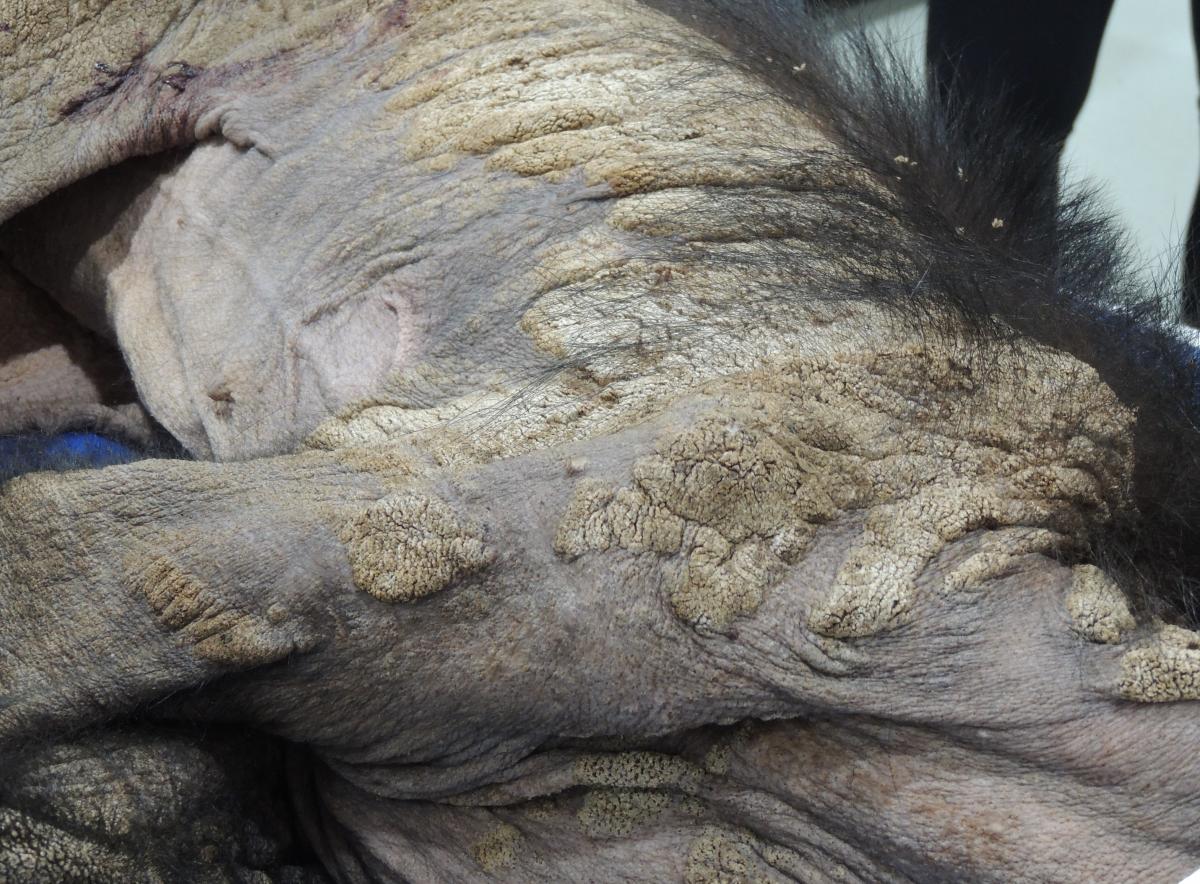 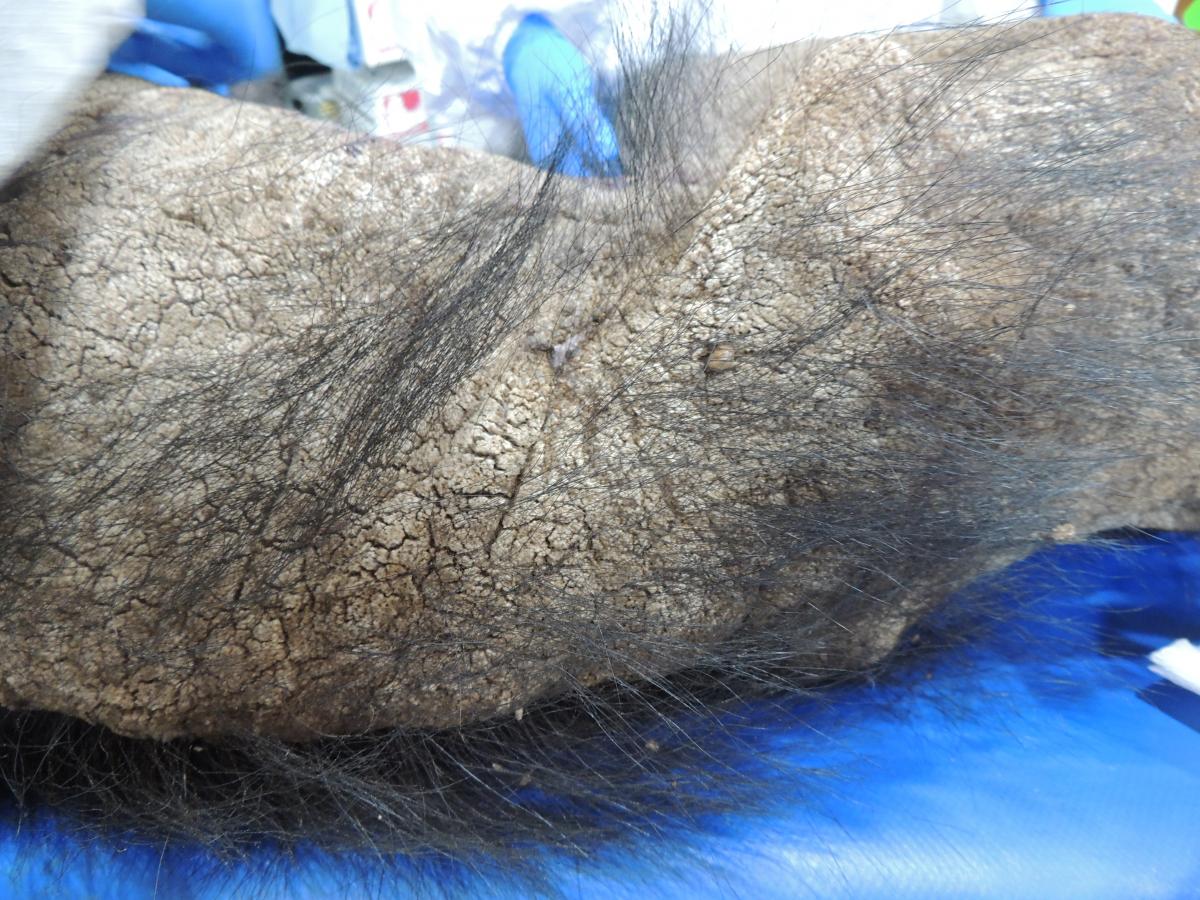 Severely affected animals will become thin, depressed, and lethargic. Although affected animals are usually physically capable of eating, they often cannot consume enough calories to support themselves nutritionally while also trying to fight off the disease. Some animals will develop compromised sight/hearing due to the severity of crusting around the ears/eyes.

How is mange diagnosed?

Mange can’t be diagnosed by symptoms only; there can be several causes of hair loss in animals, including ringworm, bacteria, other parasites, or even routine shedding.

A definitive diagnosis is made by examining samples from skin scrapings under a microscope to look for mange mites. Typically, multiple skin scrapes are needed since mites may be in different life stages on different parts of the body.

Can mange be treated? 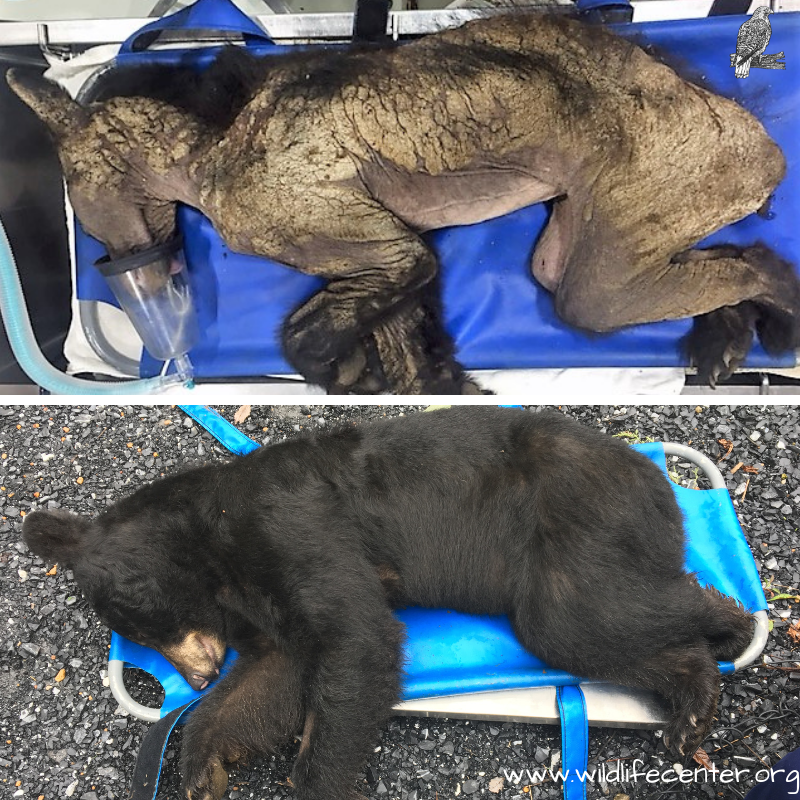 Mange can be successfully treated by administering medication that kills the mites. The successful treatment of mange is currently a significant focus of research; biologists, veterinarians, and other wildlife professionals are exploring new medications that can be used more effectively to treat affected wildlife.

Typical treatment includes administering an oral or injectable anti-parasitic drug to the animal; sometimes antibiotics and anti-inflammatories are also prescribed to treat secondary infections in severely affected animals. Severely affected animals may not survive despite treatment; while the mites may be killed with the medication, the animal’s body condition and overall health may be too comprised for recovery.

It’s important to note that each affected animal needs to be individually treated based on body weight and other factors; it’s not safe [or legal] to attempt to leave medicated food for an animal in an outdoor environment. While it may be tempting to leave medication-laced food for an affected animal, there is often no guarantee that the correct animal will receive the medications.

The Center’s Research on Bear Mange

In 2017, Dr. Peach Van Wick, the Center’s veterinary research fellow, began a study on a new drug for treating bear mange. If proven safe and successful, this one-time treatment could be applied in the field, which means fewer afflicted bears would need to go through the stress of capture, transport, and treatment at a wildlife rehabilitation center.

Read the abstract "Treatment of Sarcoptic Mange in an American Black Bear (Ursus americanus) with a Single Oral Dose of Fluralaner" here.

Bears at the Wildlife Center who took part in the study: