Most people don’t think about housebreaking a cat. They assume that cats will automatically use a litter box, but this isn’t always the case. If your cat is not using the litter box, go through the following checklist and make sure you try each suggestion.

Is this a medical problem?
If a cat suddenly starts going outside of the box, be sure to have a veterinarian check and make sure the cat doesn’t have a medical problem, such as a urinary tract infection.

Is this a litter problem?
Some cats have a preference for a certain type of litter. Try different litters to see if the cat likes one type over another. Most cats do not like perfumed litters and litter box liners. These items may be handy for humans, but they aren’t so handy if the cat does not use the box because of them.

Are there enough litter boxes?
Imagine a house full of five people having to line up for one bathroom, or the only bathroom that was available was way across the house, up the stairs, and in a back corner. Have more than one box. For multiple cat households, be sure there is one box more than cats in the house. 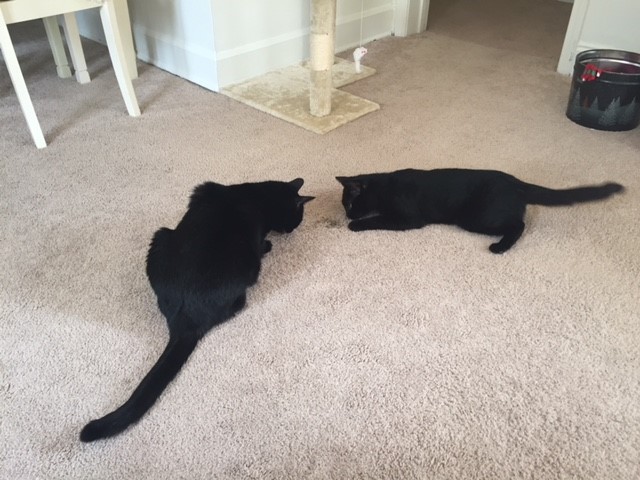 What type of litter box?
Some cats don’t like lids on a cat box. They feel vulnerable and want to see around as they do their business. If there’s a lid on the box, try taking it off.

Are the litter boxes clean?
Once a week might seem like enough to humans for cleaning out the cat box, but think about using a toilet that only gets flushed once a week. YUCK! Scoop the box every day.

Is this a location problem?
Some cats have a preference for where they go. If a cat is peeing or pooping outside of the box, try placing a box in the area that the cat has chosen. If this is an area that a cat box cannot be placed, try feeding the cat in this area. Cats usually won’t relieve themselves in their feeding area. Citrus spray squirted in the area where unwanted relieving is occurring may help. Soft Scrub bleach can be applied to baseboards to discourage cats as well.

Is there a new cat in the house?
If a new cat has been introduced to the house, the introductions may not have been done properly. A gradual introduction needs to happen, with cats being separated in different rooms. In order to help the cats become familiar with each other’s scent, swap the cats back and forth between the rooms they are separated in. Also, put the new cat in a crate for feeding times and allow the cats to eat next to each other. The cats will begin to associate positive things with each other. See the section on Introducing Cats.

Is there a new cat in the neighborhood?
Even indoor cats may be aware of a new presence even if it is outside of their own home and begin marking around the house to establish their territory. Keep all neighborhood cats away from the house. Put tin foil under bushes and spray citrus spray around the outside of the house. Keep curtains closed so your cat can’t see cats outside. Put frosted contact paper on the windows down low where the cat can see out. See the section on Marking.

Has the cat ever been taught where to go?
So often people assume a cat knows where to go to the bathroom. It may be that the cat is confused and hasn’t properly been taught where to go in a human world. If so, it’s time to housebreak the cat. Put the cat in a small room or crate with a cat box in the back. Encourage the cat to use the box, and praise the cat when she does. Take the time to play with your cat after she’s relieved herself in the box. As the cat starts to successfully use the box, slowly increase the space that the cat has access to. Don’t rush things. This takes time and involvement in order to catch the cat in the act and direct him to the box, but the time is well spent to solve elimination problems and bring harmony to the household.

Steps to Bring Your Outdoor Cat Indoors
Learn more about why you should keep cats indoors.

This advice is from Animal Behavior Consultant Cheryl Falkenburry. Read more about Cheryl and her work.