Human-imprinting in Birds and the Importance of Surrogacy

Imprinting is a form of learning in which an animal gains its sense of species identification. Birds do not automatically know what they are when they hatch – they visually imprint on their parents during a critical period of development. After imprinting, they will identify with that species for life.

Imprinting for wild birds is crucial to their immediate and long-term survival. For example, precocial baby birds (such as ducks, geese, and turkeys) begin the process of imprinting shortly after hatching so that they follow the appropriate adult, providing them with safety.

Imprinting allows baby birds to understand appropriate behaviors and vocalizations for their species, and also helps birds to visually identify with other members of their species so they may choose appropriate mates later in life.

The timing of the imprinting stage varies from species to species, and some species of birds are more susceptible to imprinting inappropriately on human caregivers for reasons not fully understood.

What happens if a bird imprints on humans?

Imprinting on humans does not mean that birds will be “friendly” toward humans, nor does it mean they necessarily enjoy being near humans. Human-imprinted birds have no fear of people, and this lack of fear can sometimes lead to aggression toward humans. It’s not unusual for an imprinted bird to exhibit territorial behaviors toward humans just as it would with members of its own species.

Ultimately, imprinted birds find themselves in a “gray area” – they cannot appropriately interact with either humans or their own species.

Birds who are human-imprinted are deemed unsuitable for release back into the wild due to these inappropriate interactions. Some of these patients might be appropriate education animals; the Wildlife Center has several human-imprinted birds, including Gus the Barred Owl, Jaz the American Crow, Edie the American Kestrel, and Buttercup the Black Vulture. 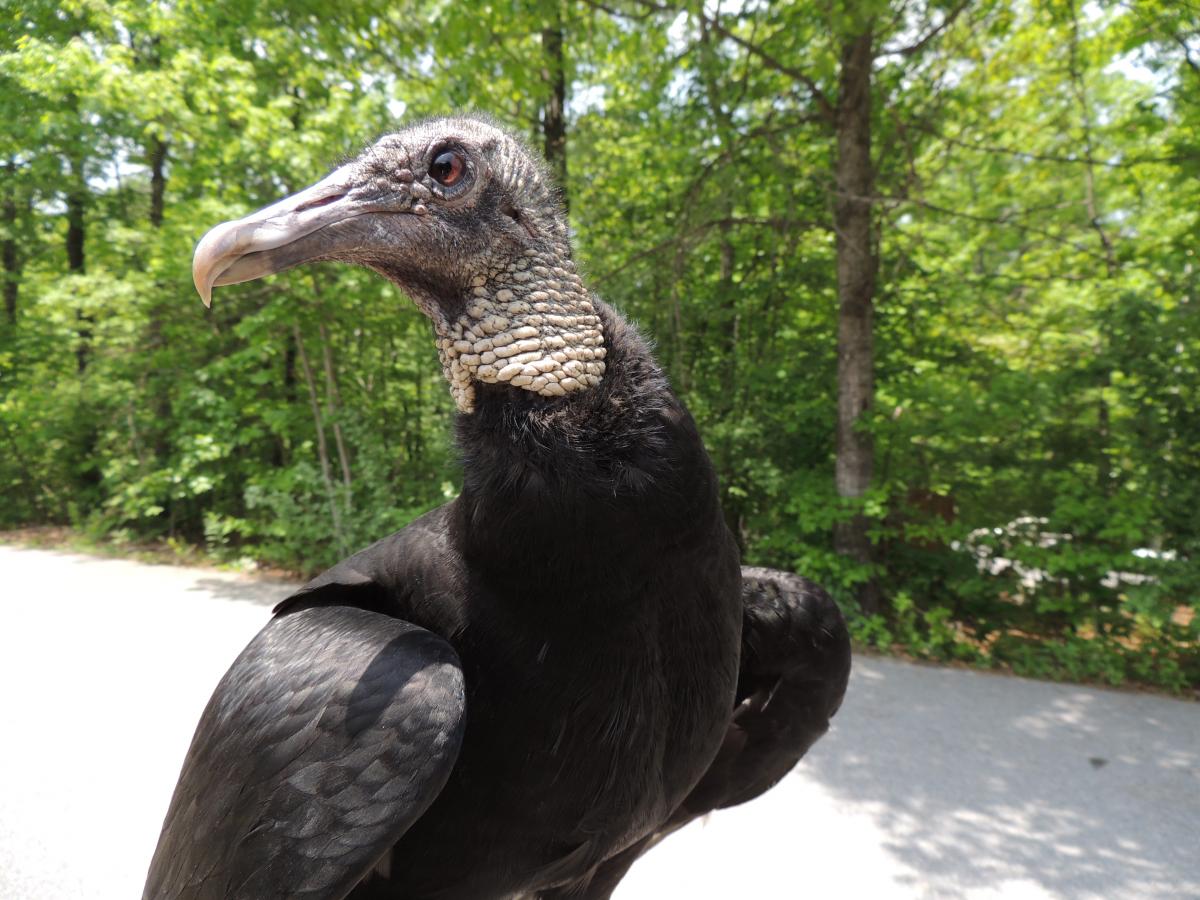 What does the Center do to prevent young birds from imprinting on humans?

When humans must care for orphaned or injured baby birds, Wildlife Center staffs take special precautions to prevent them from inappropriately imprinting on humans. Human contact is kept to a minimum; the rehabilitation staff only handle birds during the feeding and cleaning process. The rehabilitation staff, students, and volunteers do not talk to the patients. 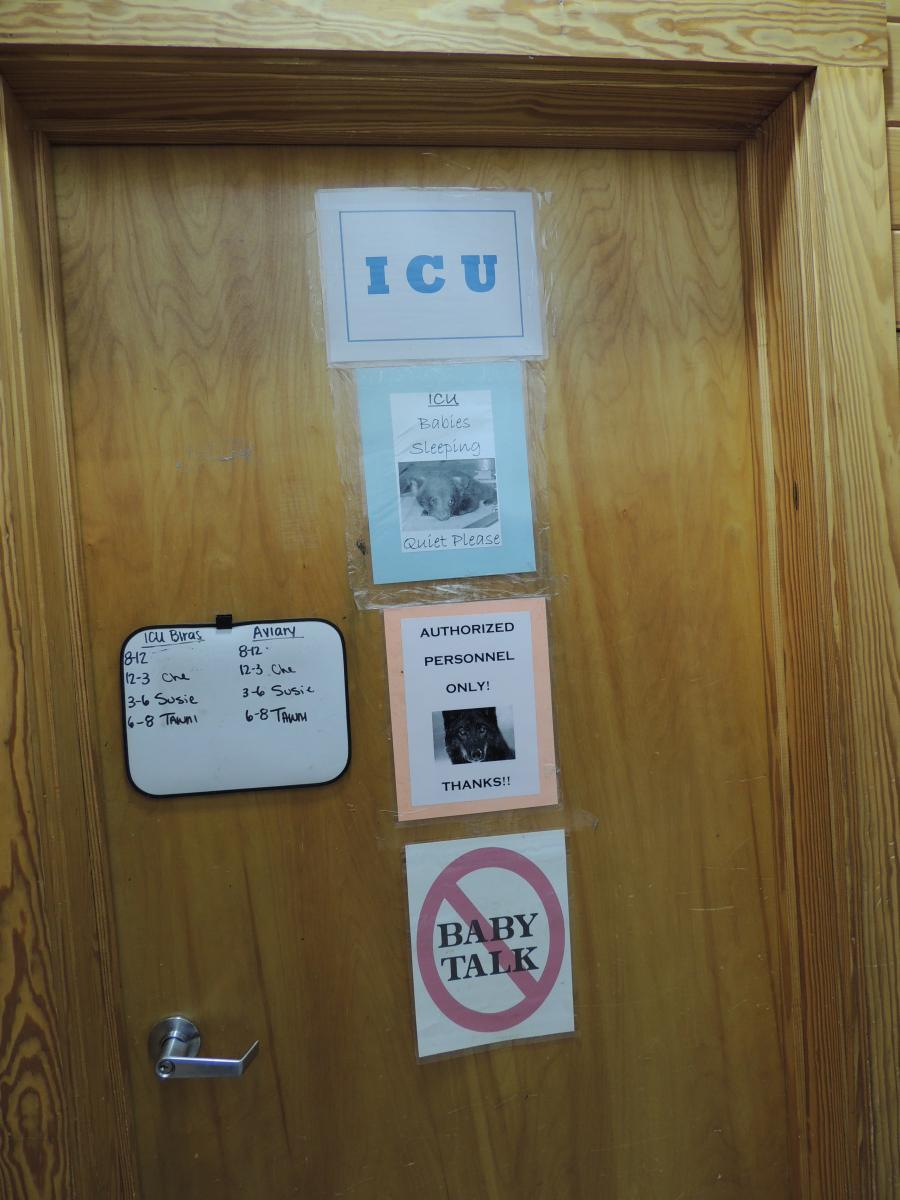 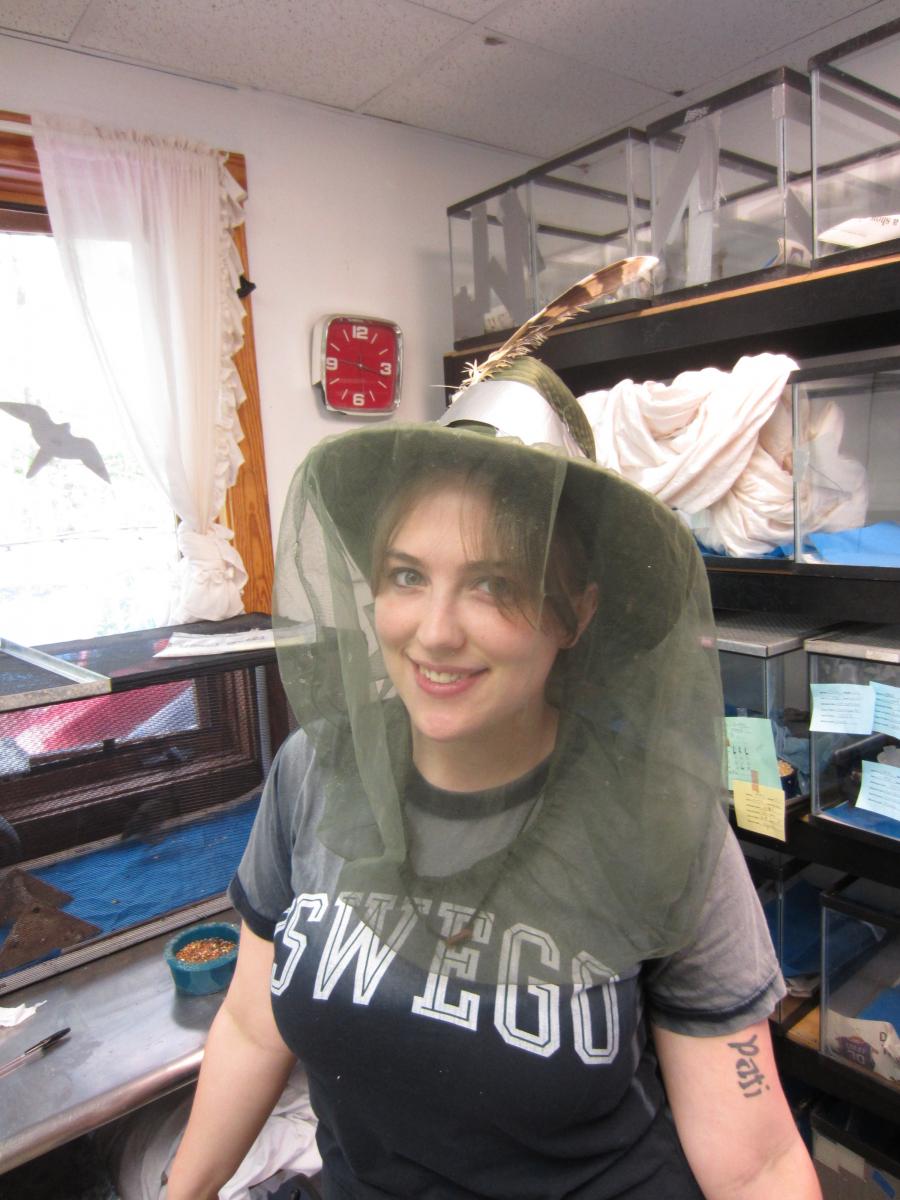 For songbirds, we try to keep babies together in groups of the same species, and this is typically enough to prevent them from imprinting on humans. With our young raptors, placing them with a surrogate parent provides them with the best chance of imprinting on the appropriate species. 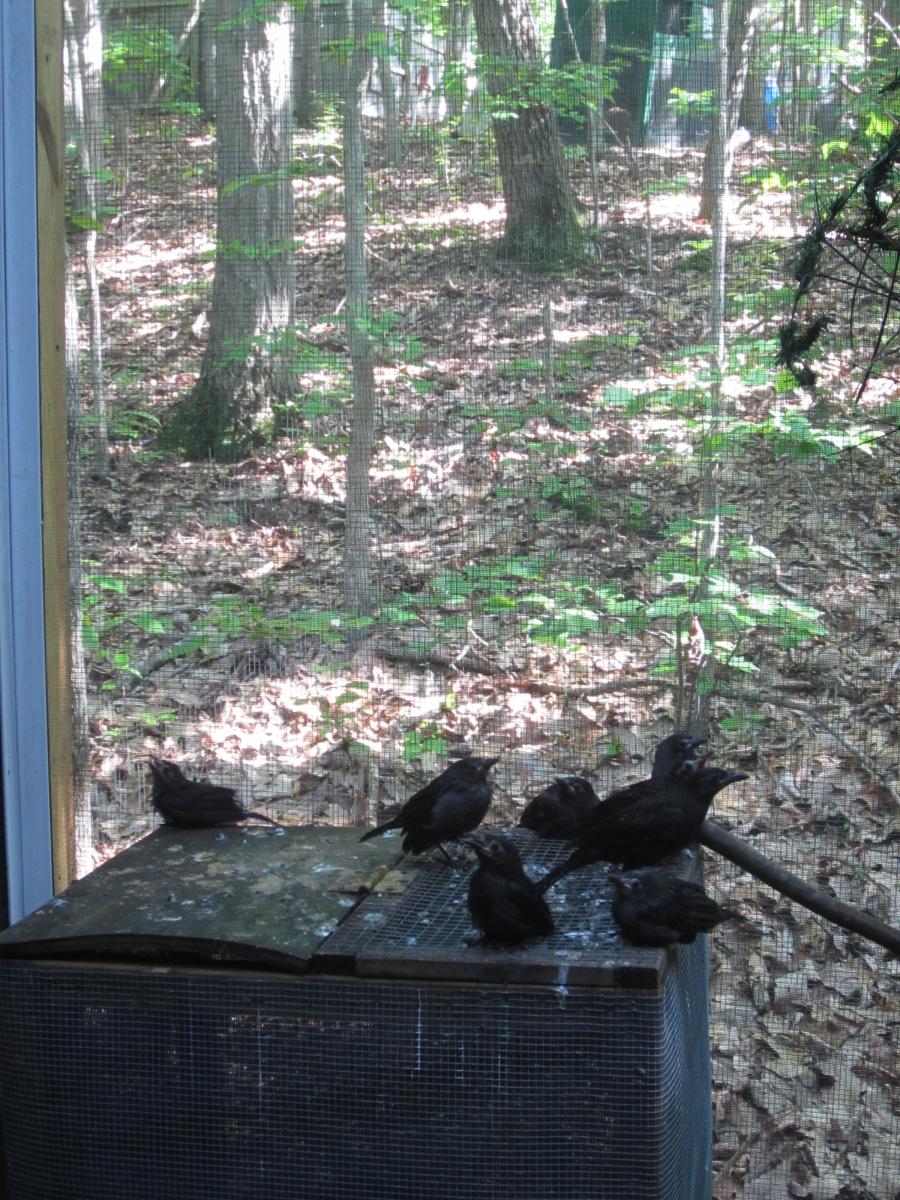 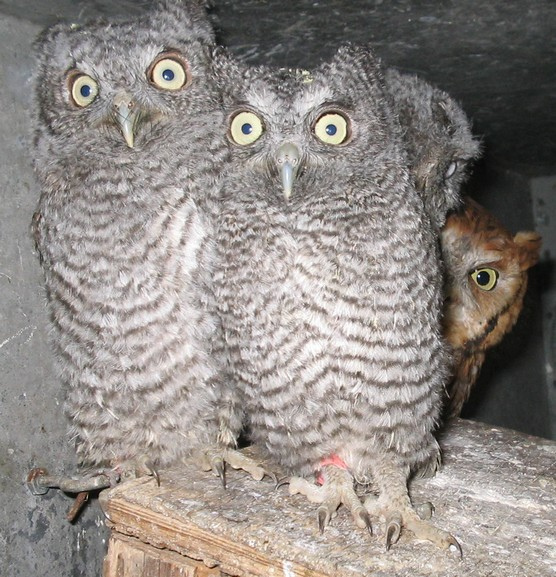 Why are surrogates so crucial to the Center?

Surrogates provide an adult role model to young members of their species to counter their interaction with human caregivers. The surrogate parent demonstrates proper behaviors for their species and reinforces their wariness of humans. This enables the young birds to be released back into the wild with appropriate behaviors, vocalizations, and reactions to humans.

The level of interaction between surrogate and baby differs in each situation. Some surrogates take an active role in caring for their “adopted” young by feeding or preening them. Other surrogates show no maternal or paternal instinct, but their presence ensures that the babies can visually imprint on the appropriate species.

Does the Center have any surrogates?

The Center is home to one non-releasable raptor surrogate – Papa G’Ho the Great Horned Owl.

Papa G’Ho was admitted to the Center in 2001 after he sustained injuries to his wings and feet, likely from being hit by a vehicle. Despite rehabilitation, Papa G’Ho never regained his ability to fly silently, which is critical to the hunting success of owls in the wild. Because noisy flight would inhibit his ability to survive independently, he cannot be released back into the wild.

Though he is non-releasable, the Center staff takes great care in keeping Papa G’Ho “wild” to ensure that the owlets he raises will be able to survive and thrive on their own. Papa lives in the patient area of the Wildlife Center, and is not on display for tour groups or open houses.

Papa has helped raise more than two dozen owlets since joining the Center as a surrogate. He plays a crucial role in raising healthy, wild Great Horned Owl orphans at the Center. Watch Papa G'Ho in action in Episode Four of Untamed!

Occasionally, Wildlife Center education animals may fill a temporary surrogate role, if their behavior is appropriate and they are able to be removed from use for outreach programs. The Center also uses adult raptor patients that are healing and medically stable, particularly in cases where the Center does not have an adult of that species available to foster young, such as Barred Owls, Barn Owls, and Bald Eagles.

What about mammals? Do you have to worry about baby mammals imprinting on humans?

The critical development period of mammals differs from birds. Mammals do not visually imprint on their caregivers, but they can become tame or habituated to humans if not handled appropriately. This is particularly true of mammals that have a prolonged juvenile period – White-tailed Deer fawns and Black Bear cubs are prime examples.

Deer fawns are herd animals, and housing fawns together or near each other in the Center’s outdoor enclosures helps to prevent them from becoming habituated to humans. Single fawns raised alone have a higher risk of inappropriately bonding with their human caregiver. 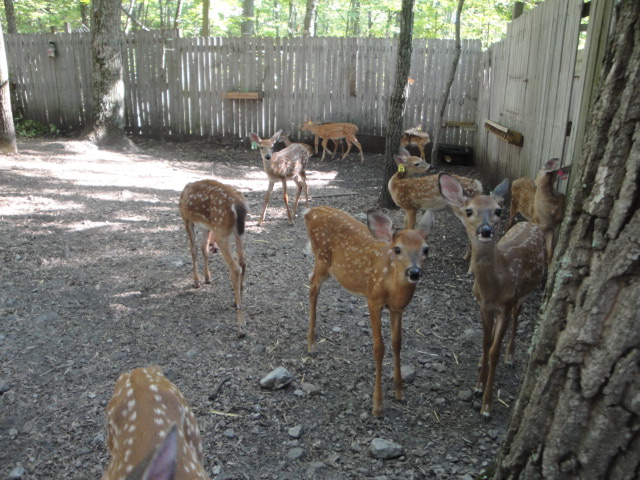 To counteract possible taming and habituation to humans, the Center sometimes houses black bear cubs with an older female bear patient that is healthy and stable. With an older bear as a role model and protector, the cubs are able to better replicate natural behaviors and interactions. Black Bear surrogates have typically spent at least a year in the wild and are able to help instill a wariness of humans in the cubs. 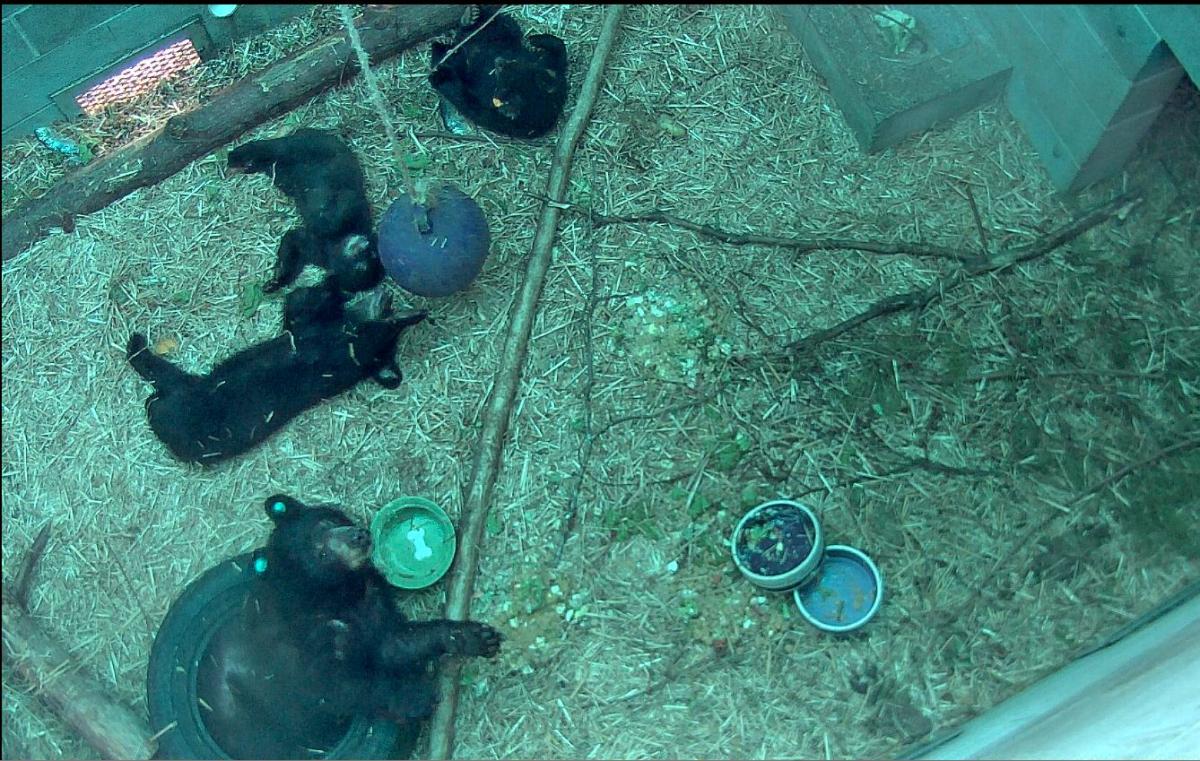 While some young mammals are more vulnerable to habituation to humans, many species of small mammals have a relatively short juvenile stage and are less likely to bond with their human caregivers when appropriate rehabilitation care is given. With all species of baby mammals, the staff strives to be as hands-off as possible, to reduce stress on the animal and risk of taming and habituation.

How can I find out more about surrogacy at the Wildlife Center?

You can stay up-to-date on current patients at the Center by visiting the Critter Corner on our website. Here you’ll find patient stories and updates about some orphaned patients at the Center. You can also find links to our Critter Cam. Papa G’Ho is often featured on the Critter Cam when he is raising young Great Horned Owlets in the spring. Orphaned birds are most frequently admitted to the Center in the spring and summer months, so be sure to check back frequently for new patient information.