How Do Raptors Get Lead Poisoning?

Lead is a soft, pliable heavy metal and fragments easily. Historically, lead ammunition has been frequently used in big game hunting, including deer, elk, and moose hunting. Even when a lead core bullet passes all the way through its intended target, as much as a third or more of the bullet’s total weight will be broken away and remain inside the animal.  A normal practice for hunters is to remove the internal organs of the shot deer or other game animal, and simply leave the “gut pile” in the fields after removing the body of the animal. Nearly all of the gut piles contain tiny shards of the lead ammunition.  Radiographs of animals shot by hunters show that these small lead fragments can lodge as much as 18 inches from the main wound channel – the pathway of the bullet. If consumed, a fragment of lead the size of a grain of rice is enough to kill an eagle. While eagles and other raptors regularly expel indigestible material [fur, feathers, some bones] about 12 to 24 hours after eating, lead can be quickly eroded by stomach acid – particularly very small fragments.  Even small amounts of ingested lead can also cause detrimental cumulative effects for avian scavengers.

Multiple studies have noted a correlation between big game hunting season and an increase in lead-poisoned birds. This is a problem that is found throughout North America in a variety of species – Bald Eagles in Minnesota and Wyoming, vultures in California, ravens in Canada and the southern Yellowstone ecosystem. Lead exposure has also been a significant problem for the reintroduction of the California Condor in the western United States.

This problem is often even more serious when hunters or farmers shoot nuisance animals, such as groundhogs, because the entire animal is left in the field, and is typically out in the open where eagles and other avian scavengers can find it.

For eagles and other raptors, lead is most toxic when consumed, as opposed to lead bullets or shot simply lodging in muscle tissue. Exposure to digestive fluids and stomach acids breaks down the lead, allowing it to be absorbed into the bloodstream and distributed to internal organs, the nervous system, the respiratory system, and the renal system. Lead may also leach from lead fragments lodged in joints and in bone marrow.  Even if the actual projectile has moved through the digestive tract and out of the body, dangerous amounts of dissolved lead can still be circulating in the blood or stored in the bones or internal organs of the bird’s body. No level of lead in the body is considered “safe”.

This video from Cobequid Wildlife Center illustrates how eagles and other raptors get lead toxicity: 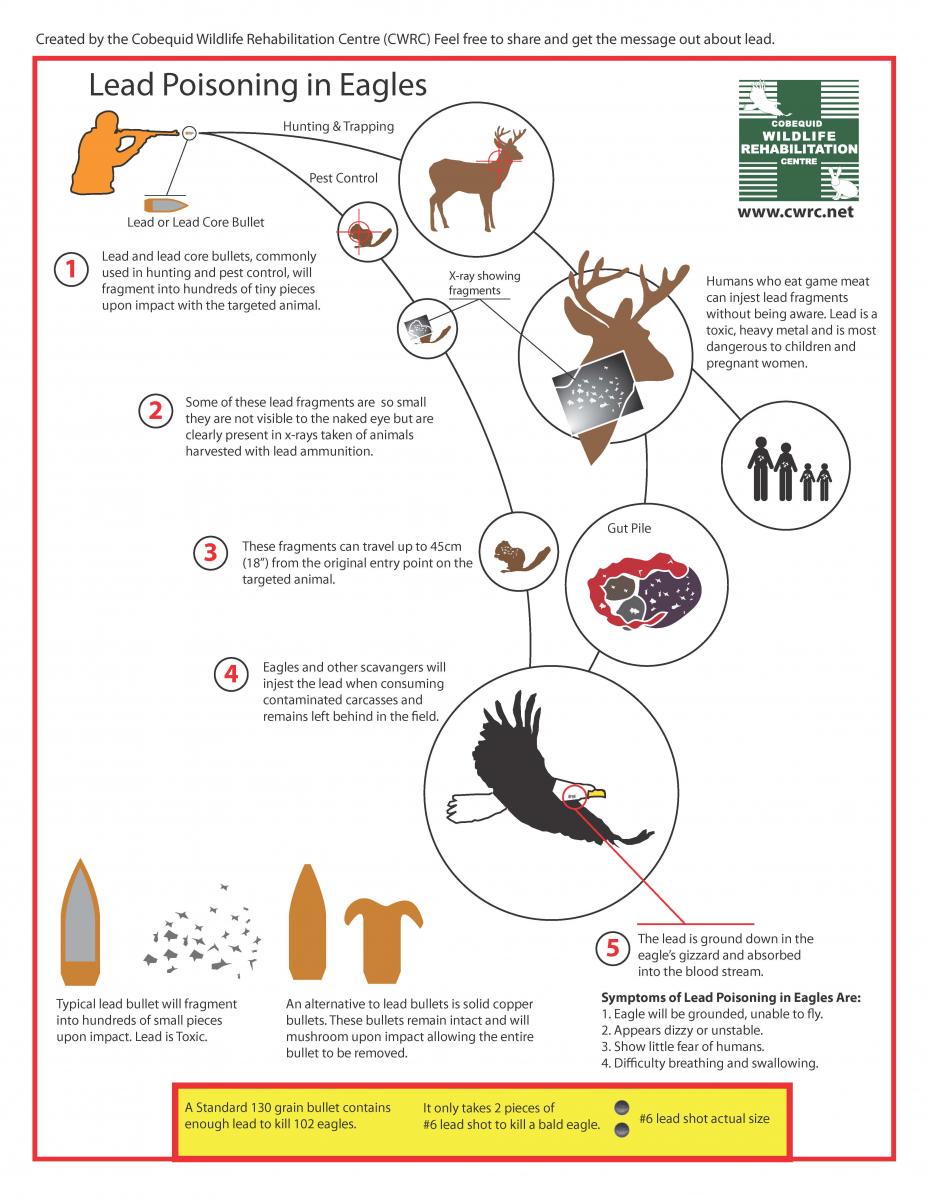 Return to Lead Toxicity in Raptors