Clear your gear to help keep wildlife and the environment safe.
The Wildlife Center of Virginia has admitted dozens of wildlife patients who have sustained injuries due to entrapment in, or ingestion of, fishing tackle. The most frequently admitted species in these cases are waterfowl, turtles, and raptors who hunt near water. 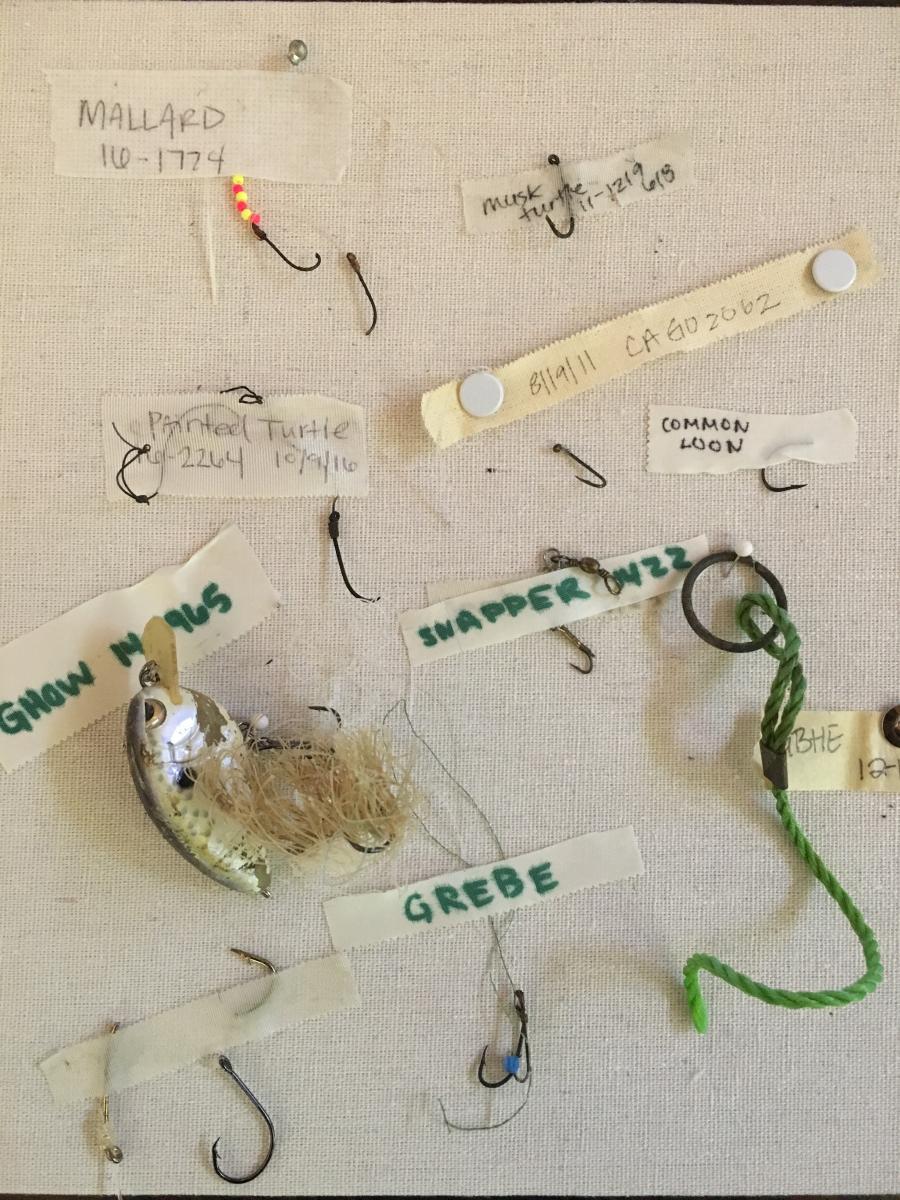 These wild animals come into contact with fishing line, hooks, and netting in a variety of ways. Waterfowl and turtles become entangled when swimming in bodies of water where line and netting is carelessly discarded. Birds sometimes use fishing line and netting fragments as nesting material, which can lead to entanglement of both the parents and chicks. The ingestion of fishing hooks is most common among turtle species who see the fisherman’s bait as a quick and easy meal. Hooks left in released fish can also be ingested by predators such as birds or large turtles.

Of the fishing gear victims admitted to the Wildlife Center since 2011, nearly 60 percent of the patients died or were euthanized as a result of their injuries.

While this statistic is discouraging, it’s important that animals injured by fishing line receive appropriate medical assessment and treatment. If you see an animal who is tangled in fishing line, or if you know a wild animal has swallowed a hook, contact a permitted wildlife rehabilitator or veterinarian for advice. 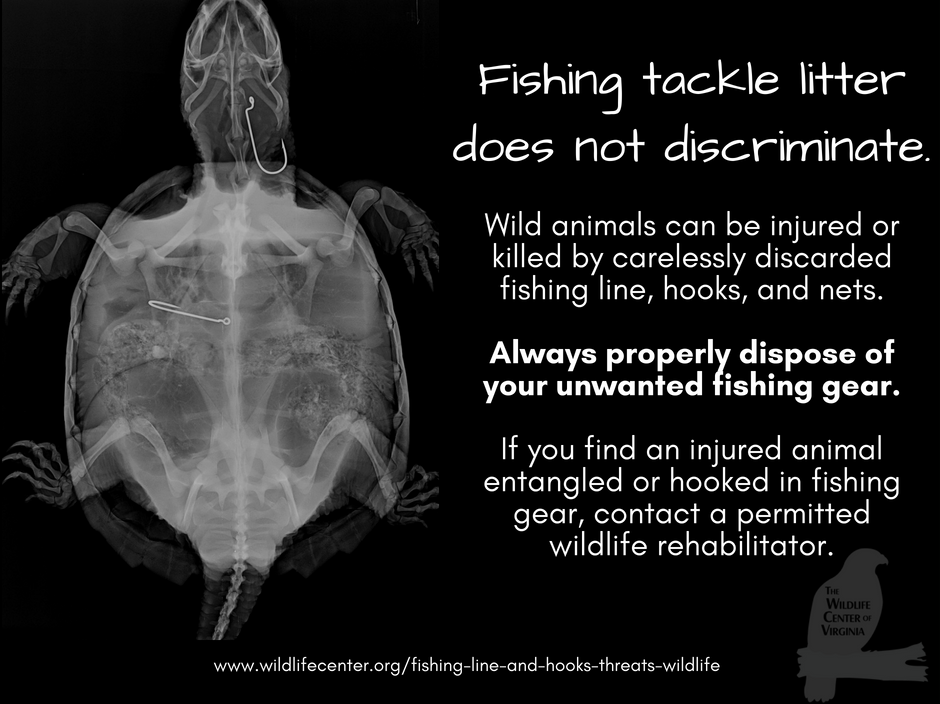 When an animal becomes entangled in fishing line or netting, a painful struggle ensues. The victims of this entanglement typically suffer feather damage and lacerations from the constricting line as they fight to escape. Entangled animals are often entrapped and are unable to move, find food, or escape from predators. For bird parents, this affects the survival of their reliant chicks as well. This deadly entrapment often ultimately leads to exhaustion, starvation, and dehydration if the animal is unable to free itself.

The ingestion of fish hooks is dangerous for all species because it often results in the hook lodging into the side of an animal’s mouth, esophagus, or stomach, causing internal bleeding, regurgitation of food, tissue damage, pain, and death. When hooks and sinkers are made from lead, they can cause lead toxicity in raptors. Surgical removal of the hook, which can lead to a long recovery period, is often the only option for patients who have swallowed hooks.

What species can be hurt?

Dozens of different species of native wildlife have been admitted with injuries or problems caused by improperly discarded fishing gear.

Canada Geese are the most frequently admitted fishing gear victims; nearly a quarter of the fishing tackle victims since 2011 were Canada Geese.

While the most common fishing gear victims include waterfowl and water turtle species, this form of littering does not discriminate. The Wildlife Center has admitted a number of patients who suffered injuries from improperly discarded fishing line and hooks, including a Virginia Opossum, an Eastern Screech-owl, and a Pileated Woodpecker. Even though these animals typically do not spend much time around water, they are still affected by this form of littering. 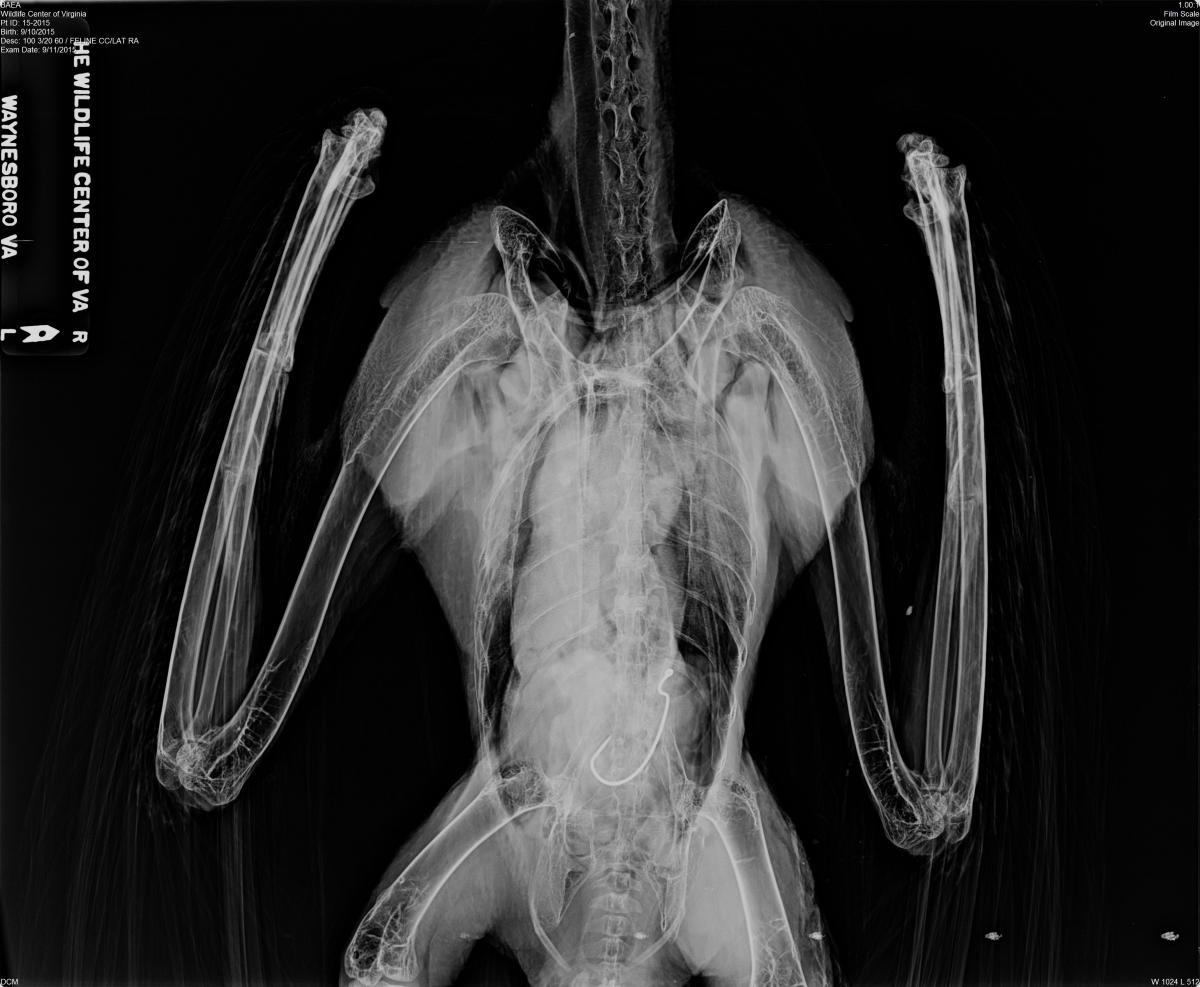 Bald Eagle #15-2015- In September 2015, Bald Eagle #15-2015 was admitted to the Wildlife Center of Virginia with a large fish hook lodged in its ventriculus (also known as the gizzard) that needed to be surgically removed. 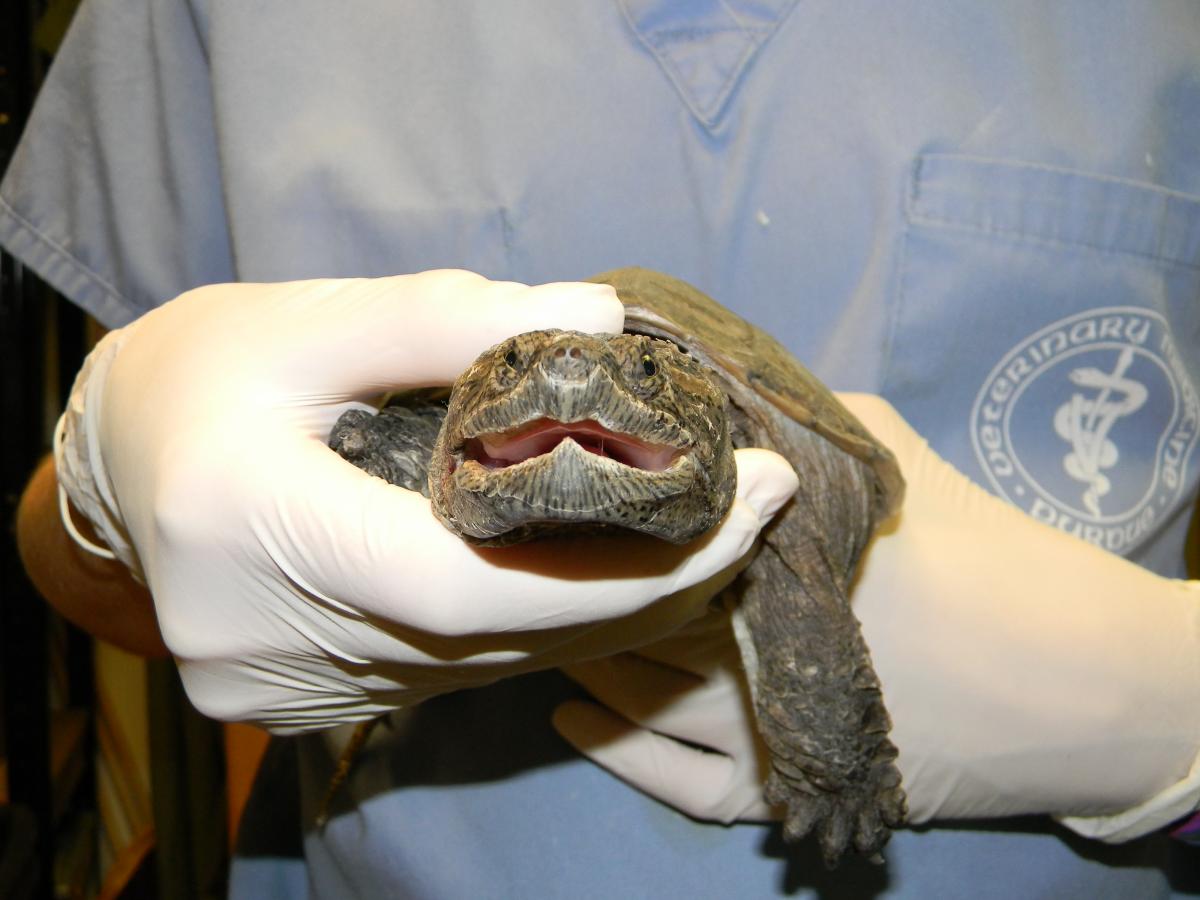 Snapping Turtle #12-1366 - In June 2012, young snapping turtle #12-1366 was found with fishing line hanging out of its mouth attached to a hook caught in the esophagus. The veterinary staff removed the hook with a non-invasive surgical procedure, and the turtle was released in July 2012. 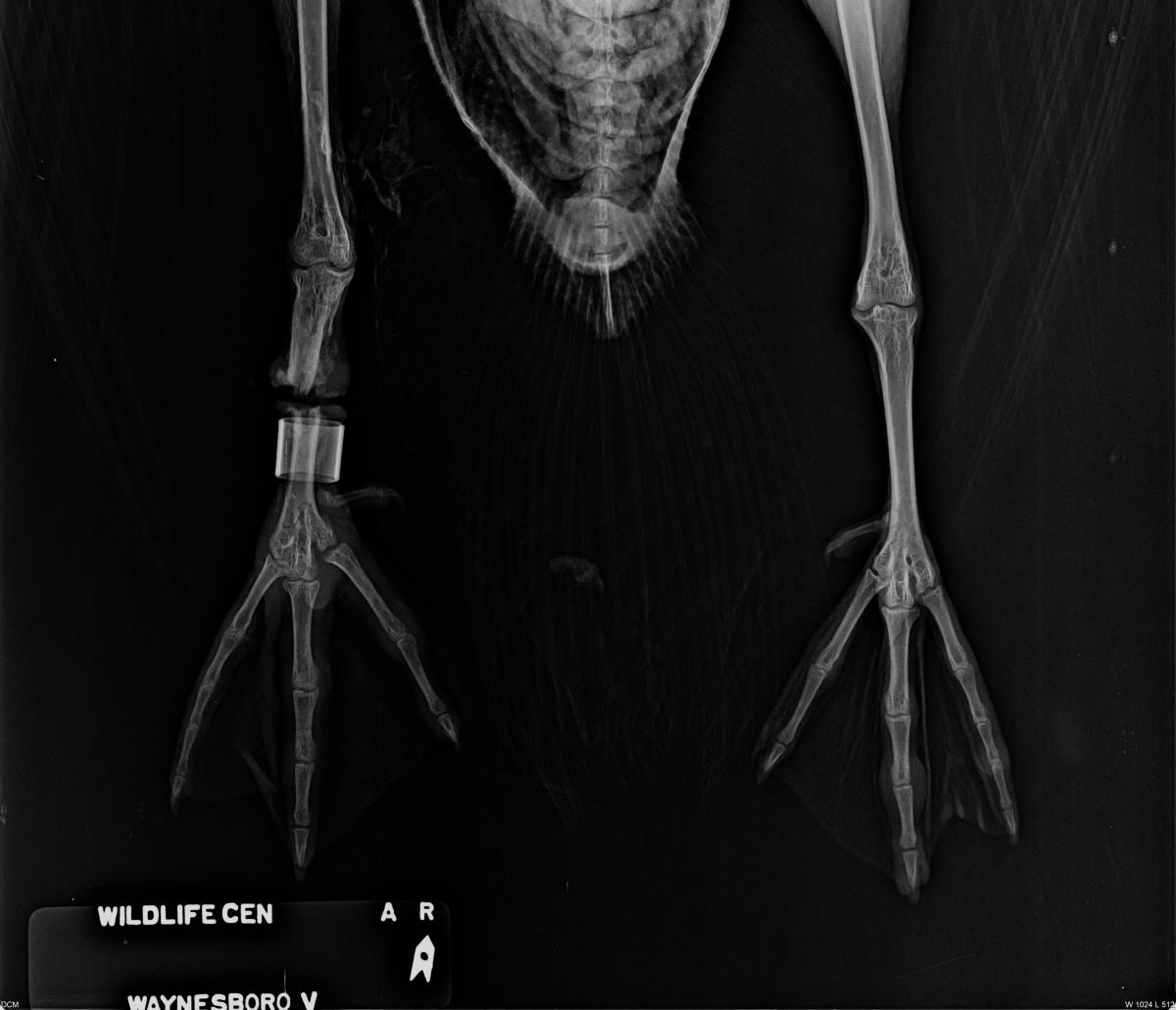 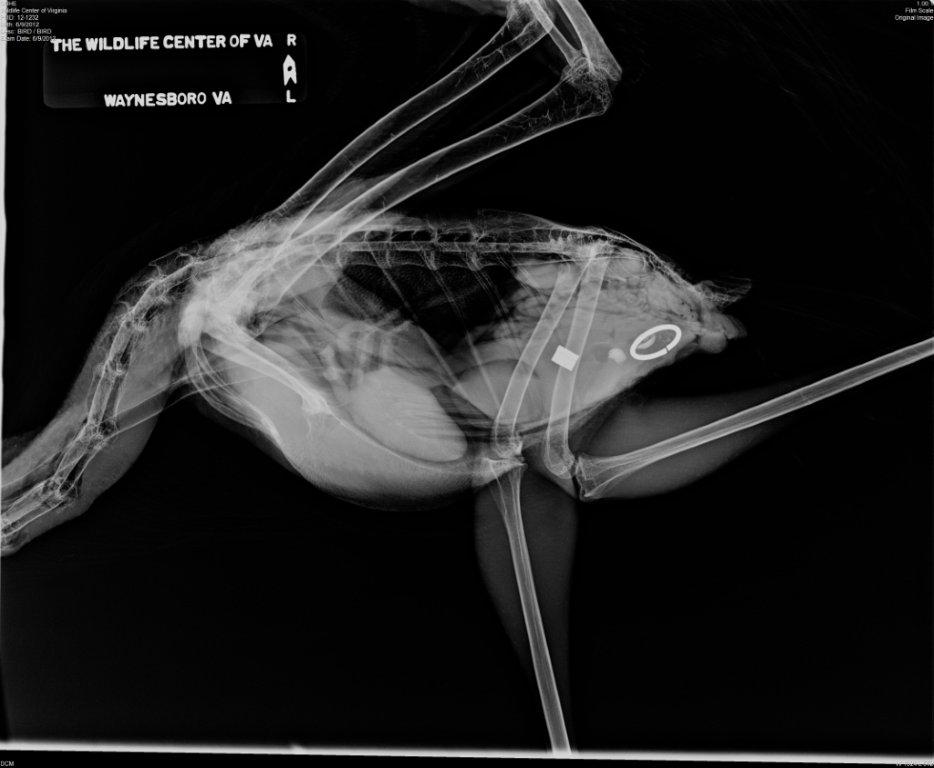 Great Blue Heron #12-1232 - Center staff believe the heron spotted some fish that had been placed on a fisherman’s stringer; the heron ate the fish – and the stringer. The string was made of metal and nylon and needed to be surgically removed. 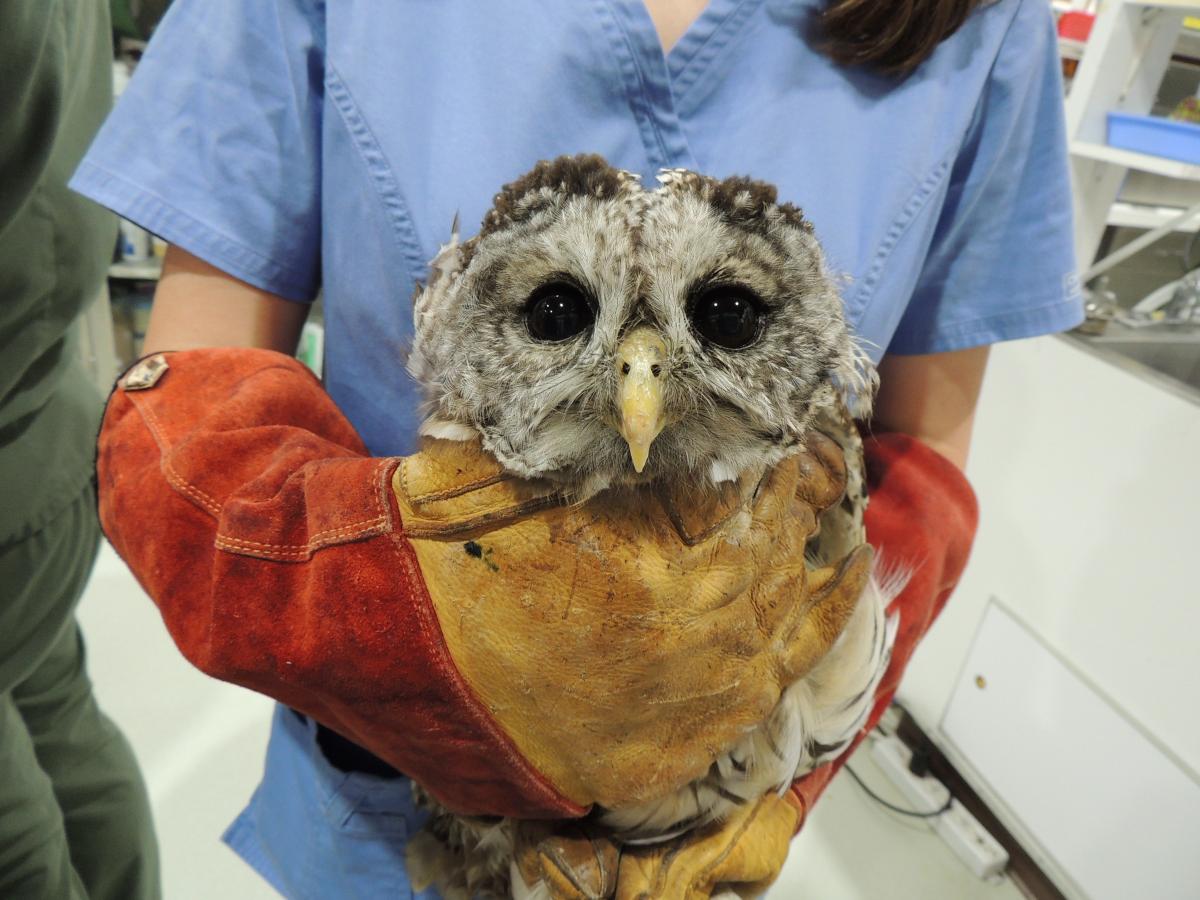 Barred Owl #18-2349 - an adult Barred Owl was found entangled in fishing line in Richmond, Virginia. The bird had a monofilament line tightly wrapped around its right wing, which caused severe wounds. Unfortunately, the owl died

How can you help protect wildlife?

We can all prevent wildlife injuries and deaths caused by improperly discarded fishing line and hooks; the solution to this problem is to change our behavior.