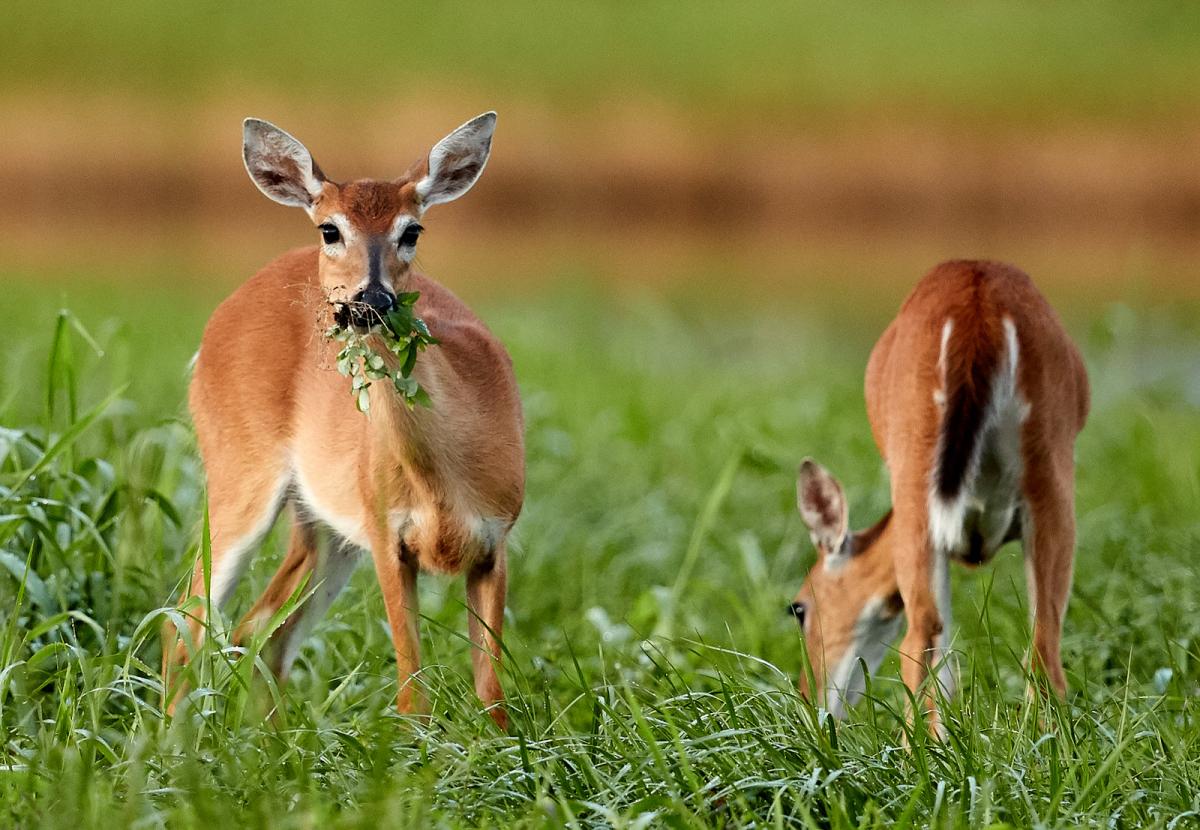 White-tailed Deer live in many habitats throughout Virginia – from quiet, deep forests to the busy suburbs, there are few areas where they don’t live! Deer nearly disappeared from Virginia in the 1930’s due to overhunting, but now there may be more White-tailed Deer in Virginia than ever before. Many Virginians and visitors love seeing deer in their natural habitats, but with numerous deer and expanding human development, sometimes conflicts can arise.

Eating Gardens/Plants: Deer are herbivores and enjoy eating a wide variety of ornamental and garden plants, much to the dismay of many homeowners. Deer may prefer different plants depending on where they live, and the abundance of alternative food sources will also influence their tastes.

In areas where there are few deer, planting trees, shrubs, and ornamental flowers that deer don’t like to eat can help reduce foraging damage. In areas where deer populations are high, this strategy likely won’t impact deer foraging – deer may eat less palatable plants if food is scarce.

In general, marigolds, daffodils, chrysanthemums, barberry, potentilla, American holly, boxwood, ornamental grasses, junipers, and some spruce and pine trees are less palatable to deer. Deer favorites include azaleas, pansies, peonies, hostas, roses, and fruit trees. Check with your local garden store or extension office for more information on what types of plants are more deer resistant in your area. Click here for the Virginia Cooperative Extension’s information on deer resistant plans and deterrents; click here for their complete guide.

In general, visual, audio, and scent/taste deterrents can be effective for locations where there are occasional deer visitors. In areas where deer populations are high, exclusion is a more effective and consistent solution.

Visual & Audio: Scarecrows, predator eye balloons, flashing or strobe lights, and mylar tape or flagging are all effective visual deterrents, but the most effective deterrents offer a combination of visual and audio stimulus and should be changed often. Deer can habituate quickly to any single deterrent, so repellents should be moved or changed every few days to be most effective.

Auditory deterrents don’t need to be extremely loud; deer have sensitive hearing and will often startle at intermittent banging noises or voices. Gas or propane exploders have been used effectively in orchards and fields.

Scent/Taste: A variety of scent repellents can be used to repel and alarm deer; it’s recommended to use this type of repellent in conjunction with visual and audio deterrents for maximum efficacy. Simple household items such as soap bars, mint oils mixed with pepper and garlic, and citrus smells may help with occasional deer visitors, but need to be reapplied frequently. There are a variety of commercial scent repellents on the market; many rely on the smell of predator urine to startle deer and keep them out of the affected area.

Exclusion: The most effective way to protect a garden against deer is exclusion through fencing. Adult deer can clear a six-foot fence; an eight-foot fence is more likely to protect a particular area from deer visitors. Fences must be entirely secure; deer may try to crawl under loosely constructed fences.

A shorter electric fence can also be effective at protecting gardens from deer in rural areas; there are a variety of plans for homeowners who would like to construct their own fences.

November is the worst month for collisions, followed by October and December. The riskiest times of day for deer-vehicle collisions are dusk and dawn, typically 5:00 – 8:00, both am and pm.

Deer whistles have not been proven to be effective in reducing collisions, so it’s important that drivers take steps to reduce the risk of collisions.

If you hit a deer: 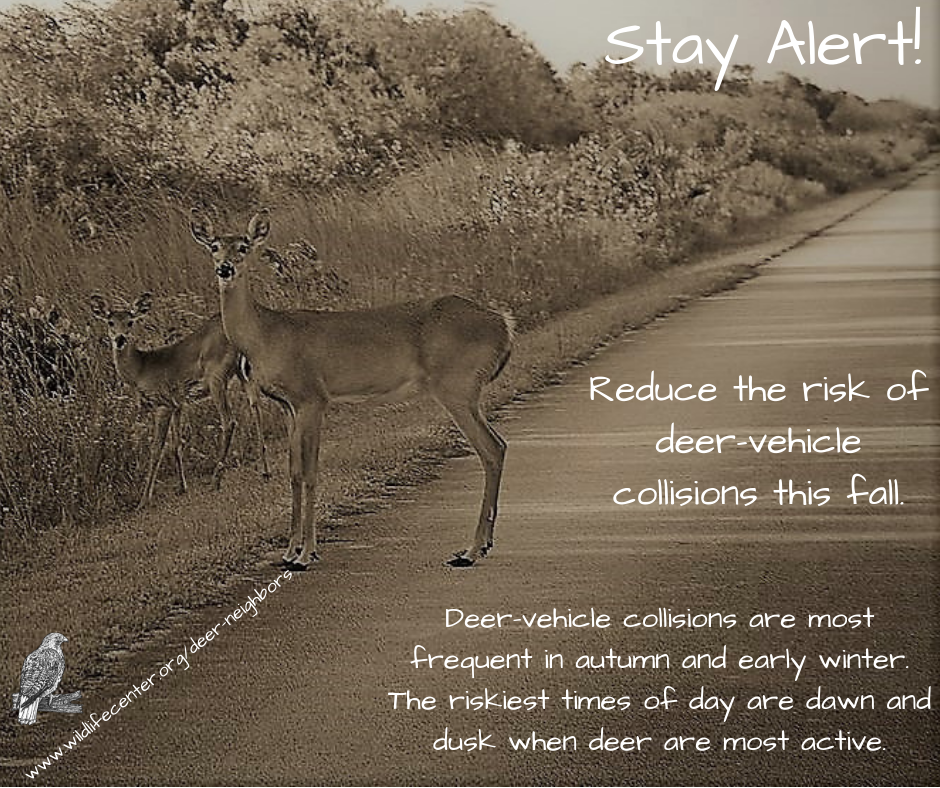 If you Find a Baby Deer 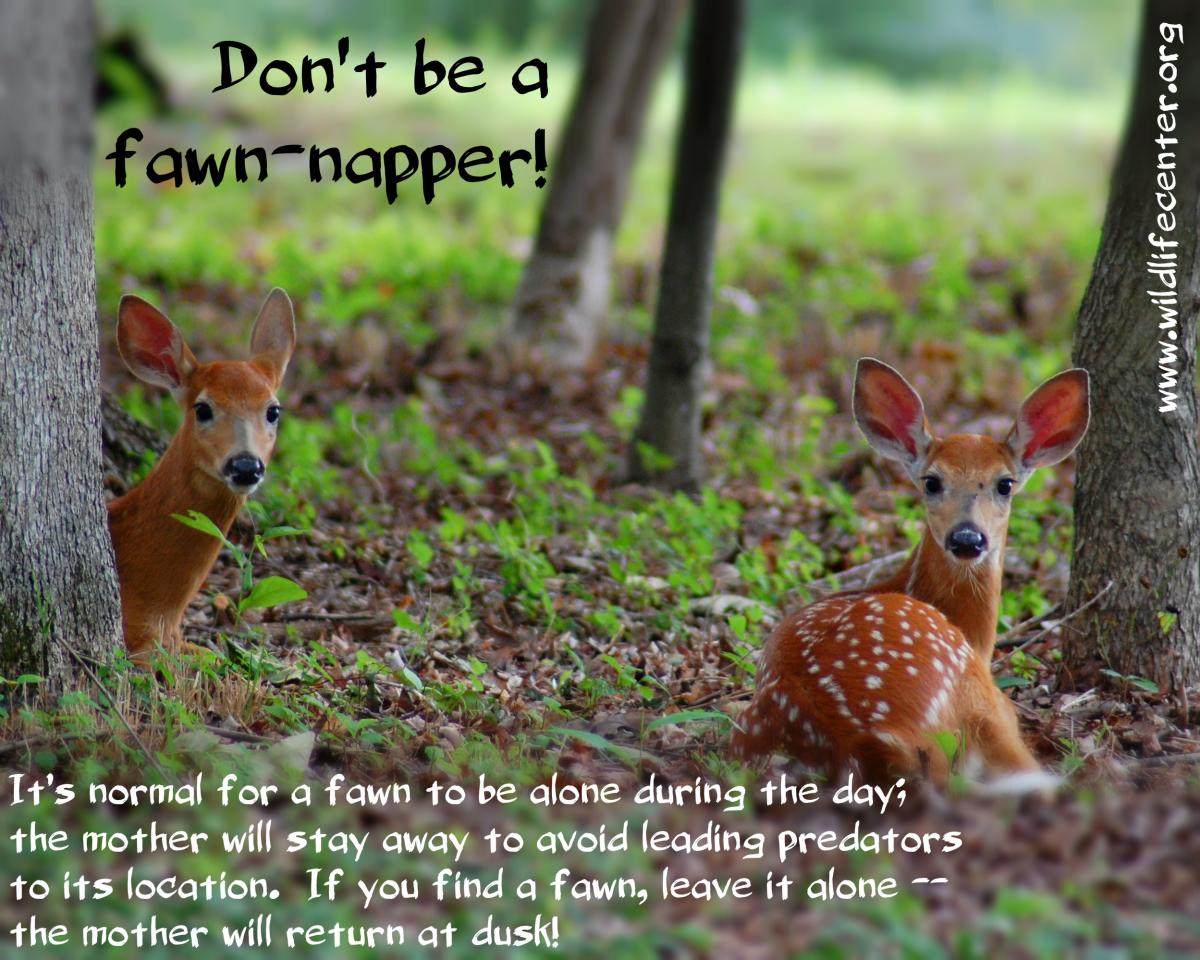 In Virginia, White-tailed Deer fawns are born April through July, with the majority of fawns born in June. Most first-year does will have one fawn each year, but twins or triplets are typically seen thereafter.

Until they are strong enough to keep up with their mothers, deer fawns are left alone while their mothers go off to feed. Mother deer will stay away from the fawns to avoid leading predators to their young. Does return at dawn and dusk to feed and/or move their young. Click here to learn more about what to do if you find a fawn.

More Info on Living with Deer

The Humane Society of the United States: Deer