During the past month, owlet #22-0294 has been settling in well. The rehabilitation team notes that the owlet is gaining weight, eating well, and is often seen sitting next to Papa G'Ho. On April 19, both the owlet and Papa G'Ho were moved to flight pen A2, a larger enclosure with the space to house more owlets and allow the birds to practice moving around. Later that week, the rehabilitation team moved owlet #22-0489 and owlet #22-0490  into the A2 enclosure. Owlet #22-0294 has continued to do well with the addition of the other owlets.  Last week, Center staff observed a special moment between Papa G'Ho and the owlet on camera -- Papa was seen preening the owlet, a behavior that adult Great Horned Owls commonly perform on their offspring in the wild. 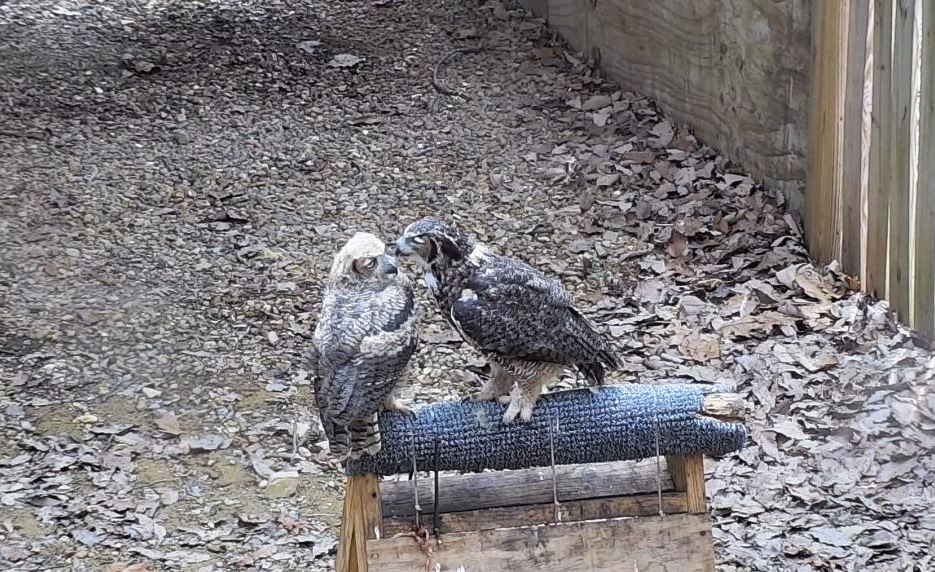 After an acclimation period, the rehabilitation team placed owlet #22-0490 in the A2 flight pen with Papa G’Ho and the other owlets on April 24. Though the introduction initially went well, shortly after the owlet left its crate it flew into one of the perches in the enclosure and injured its wing. The rehabilitation team immediately crated the owlet and brought it inside the hospital for an examination. Radiographs revealed that the bird fractured the radius and ulna in its right wing. The veterinary team stabilized the fractures with a body wrap, started the owlet on pain medication and anti-inflammatories, and placed it inside the hospital's ICU for rest and close observation.

On April 26, Center veterinary intern Dr. Jenn anesthetized the owlet and surgically placed a pin in its right wing to help its fractures heal correctly. Dr. Jenn also started the owlet on a course of antibiotics and ice pack therapy.  The incision site where the pin was placed has appeared slightly swollen,  but looks clean and is starting to scab over. For now, the veterinary team will keep the owlet inside the Center where they will closely monitor for any signs of infection; its prognosis is guarded.

Following a period of acclimation, owlet #22-0489 was placed in the Center's A2 flight pen with Papa G'Ho and the other owlets on April 24. Though the owlet appeared to be settling in well during the first couple of days, on April 27 the rehabilitation team noticed that it had a right-wing droop. The owlet was taken inside the hospital for an exam, which revealed that the radius and ulna in its right wing were fractured.  Center staff are not sure exactly how the injury happened, but they suspect that the owlet flew into one of the perches in the enclosure.  The veterinary team applied bandages to stabilize the owlet's injured wing and started the owlet on anti-inflammatories and pain medication. The owlet was then placed in the Center's ICU where veterinary staff could closely monitor it.

On April 30, Center veterinary intern Dr. Jenn anesthetized the owlet and surgically implanted a pin in its right wing to help stabilize the fractures. The next day,  the site where the pin was placed appeared swollen and abnormally colored, with a moderate amount of bloody discharge present. In addition to its other medication, the veterinary team started the owlet on a course of antibiotics to fight infection and have been applying an ice pack to its injured wing twice daily. For now, the owlet will remain inside the ICU where staff will continue to provide treatment and monitor its wing for improvement;  the owlet's prognosis is guarded.