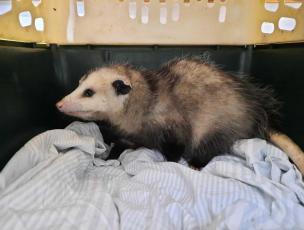 On September 2, a private citizen in Hanover County witnessed an adult opossum fall off a staircase on the side of a building. On closer inspection, the opossum was found laying on the ground and did not move away when approached. Concerned that it may have been injured from the fall, he safely contained the opossum and brought it to Wellesley Animal Hospital. The following day, it was transferred to the Wildlife Center.

On admission, Center veterinary intern Dr. Emily examined the opossum and found that it was alert, responsive and feisty. Its body condition was good, and aside from superficial abrasions around its muzzle and bruising along its abdomen, there were no obvious injuries. Radiographs did not show any bone fractures, but did reveal metallic fragments in the opossum’s stomach and gastrointestinal tract. A subsequent lead test came back positive for high levels of lead within the opossum's system. Dr. Emily suspects that the opossum most likely scavenged a carcass containing fragments of lead ammunition, leading to toxicosis.

Overtime, lead toxicity can cause muscle weakness and incoordination, which may be why this opossum fell from the stairs. Left untreated, lead toxicity would eventually cause more severe neurologic symptoms, such as seizures and death. Historically lead tests have not been commonly performed on mammals. However, recent positive results at the Center and other facilities have increased the awareness of lead toxicity in mammals, and have led to increased testing in non-avian species.

The opossum was immediately started on chelation therapy to remove the deadly toxin from its system, as well as anti-inflammatories to help its injuries heal, and fluids to protect its kidneys during treatment. Anti-parasitic medication was also administered after a fecal sample revealed the presence of several types of intestinal parasites.

So far, its wounds have been healing nicely and it has not shown any evidence of the neurologic issues that are known to stem from lead toxicity. The veterinary team will continue with its current treatment plan, and will recheck its lead levels at a later date.

Your donation will help provide veterinary medical care to this opossum ... and more than 3,500 wild patients in need this year. Thank you!