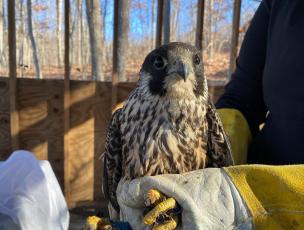 On November 29, a private citizen in Tasley, Virginia, saw a Peregrine Falcon fly into a local office building’s courtyard, chasing a pigeon. The falcon flew into multiple windows trying to escape from the courtyard and fluttered to the ground. The citizen closely observed the bird and saw that it was only able to gain a few feet of lift off the ground when it attempted to fly. Concerned that it may be injured, they contacted permitted wildlife rehabilitator Jodie Sokel, who drove to the location and captured the falcon. She transferred the falcon to the Wildlife Center the next morning.

On admission, the juvenile falcon was alert and responsive. Center veterinary intern Dr. Jenn examined the bird and found a small laceration on its back and swelling around the carpus (wrist) of its left wing. She also noted that its left wing was drooping. Radiographs revealed a callused fracture of the metacarpal bone in the falcon’s left wing, indicating that the fracture was not new, and had already healed. Though not a recent injury, the fracture could've been aggravated by the window collision. No other fractures or abnormalities were found. Dr. Jenn also noted that the falcon was wearing a silver U.S. Fish and Wildlife Service band on its left leg. Dr. Karra, the Center’s Director of Veterinary Services, reported the band number to the federal banding website to learn more about the bird’s origins. The results have not come back yet.

After the exam, Dr. Jenn sutured the laceration on the falcon’s back and started the bird on a course of antibiotics to prevent infection, anti-inflammatories to reduce swelling, and administered fluids. She then placed the falcon in the Center’s indoor holding area for rest and close monitoring.

The falcon’s laceration healed nicely during the next several days of treatment. On December 3, the veterinary team moved the falcon to “metals”, a small outdoor enclosure with a variety of crates. This area allowed the falcon to remain outside and away from people, though still contained in a crate so veterinary staff could closely examine the bird and provide daily treatment.

On December 6, veterinary staff noticed early indications of pododermatitis, or bumblefoot. In captivity, raptors are more sedentary and remain on their feet for longer periods than their wild counterparts. This can put raptors at an increased risk of developing inflammatory foot issues, which require careful management to resolve. The veterinary team is applying antiseptic to the falcon’s feet and a type of liquid bandage to act as a barrier between its feet and surfaces.

For now, the falcon will remain in “metals” where the veterinary team can perform daily feet checks and treatment; its prognosis guarded.

Despite treatment, Peregrine Falcon #21-3700’s bumblefoot progressively worsened during the past two weeks. The falcon was also losing weight and had a very thin body condition even though it was eating well. Veterinary staff continued to bandage the falcon’s feet and added a second antibiotic to its course of treatment. They also administered a medication to increase blood flow to its extremities to help its feet heal.

Sadly, on December 26, veterinary staff discovered that the toes on the falcon’s left foot became infected and its right foot developed increasingly severe lesions. The severity of the bird’s foot issues combined with its lack of response to treatment carried a grave prognosis, and the veterinary team made the decision to humanely euthanize the falcon.