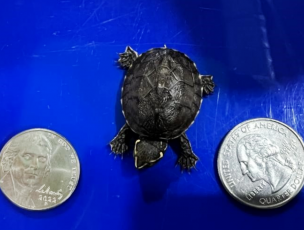 On October 22, a well-intentioned private citizen removed a small Musk Turtle hatchling from the wild with the intent of rescuing the young turtle. Though no immediate dangers were present, the rescuer may have thought this small turtle was in need of help. They brought him to the Southwest Virginia Wildlife Center of Roanoke who transferred him to the Wildlife Center of Virginia for proper turtle care.

Musk turtles generally live in the Eastern United States and Southeastern Canada. They are named for the strong smell they release when disturbed. Musk turtles typically lay between three and nine eggs, hiding them under well-hidden nests under piles of leaves or in burrows.  For their first few weeks of life, musk turtles will have a yolk sac from the egg attached to their carapace that they will draw nutrition from until they gain the strength to find their own food.

On admission, the turtle weighed about three grams and had some inflammation in one eye. The veterinary team did not determine an exact cause but suspect that it was likely due to improper husbandry causing corneal build-up or an upper respiratory infection. This turtle is currently living in the Center's reptile room and will overwinter there in controlled conditions under the care of the rehabilitation team.

The turtle eats once a day. The Center's rehabilitation team transfers him to a separate feeding tub filled with about an inch of room temperature water where the rehabilitators add the bits of food so that they can monitor how much the small turtle eats each day. His meal includes bloodworms, silversides, chopped greens, and pieces of a cut-up mealworm. If the rehabilitation team put his meal directly into his regular tank, it would be very hard to keep track of such small bits of food!

This turtle is now clinically healthy so the outlook is generally good! The main point of concern is that this is a small, young animal in human care, so the rehabilitation staff will continue to monitor the turtle's condition for any potential causes of concern.

Check out this video of Wildlife Rehabilitator Elizabeth Noderer feeding this turtle!

Your donation will help provide veterinary medical care to this musk turtle hatchling ... and to more than 3,600 patients that the Wildlife Center will admit this year. Thank you!