The Great Horned Owlets of 2021 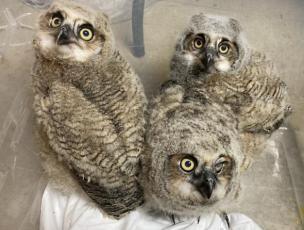 This March, the Wildlife Center of Virginia admitted three Great Horned Owl hatchlings. These owlets, who were admitted as healthy orphans, will spend the spring, summer, and early fall at the Center, growing larger until they are ready to be released into the wild as mature owls. In order to learn the correct Great Horned Owl behaviors needed to survive in the wild, these three owlets are spending time with the Center’s non-releasable surrogate Great Horned Owl parent Papa G’Ho. As a surrogate, Papa is invaluable in helping these owls to prepare for life post-release. 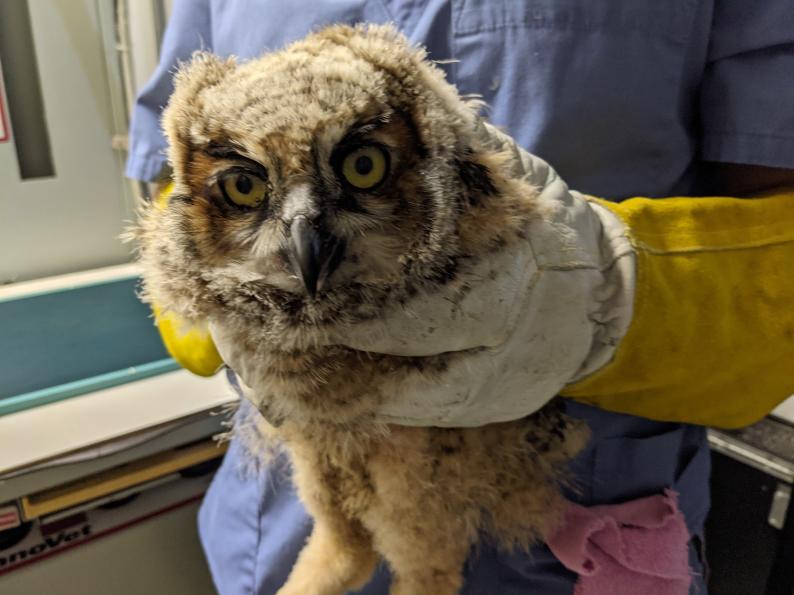 This hatchling was found on the ground near Bracey, Virginia on March 21. The rescuers called the Division of Wildlife Resources, who sent a Conservation Police Officer to help. The officer attempted to find the nest from which this hatchling fell, but was unable to locate the nest. The little owl was transported to the Southwest Virginia Wildlife Center of Roanoke, before it was transferred to WCV on March 25. Upon presentation, this owlet was healthy, alert, and responsive.

This hatchling was found on a road during a storm on March 18 near Cave Spring, VA. Although the location of the nest was known, professionals from the Southwest Virginia Wildlife Center of Roanoke were unable to successfully re-nest the bird. The hatchling was transferred to WCV on March 21. Upon presentation, Center veterinarians noted that this patient was healthy, but a bit thin.

This owlet was found on the ground near Boiling Spring, VA, on March 13. The rescuers made no attempt to renest the owl, and it was transported to the Wildlife Center on March 14. Upon admission, our veterinarians were pleased to find that the owlet had no injuries and that it was alert and responsive, with a slightly thin body condition.

All three owlets have now been introduced to Papa G'Ho, the Center's non-releasable surrogate Great Horned Owl. This has been done by placing them in a crate directly facing another crate in which Papa is housed. By allowing these three young owls to see Papa, they can begin to learn and develop those essential owl behaviors that are so important to learn at this young age. 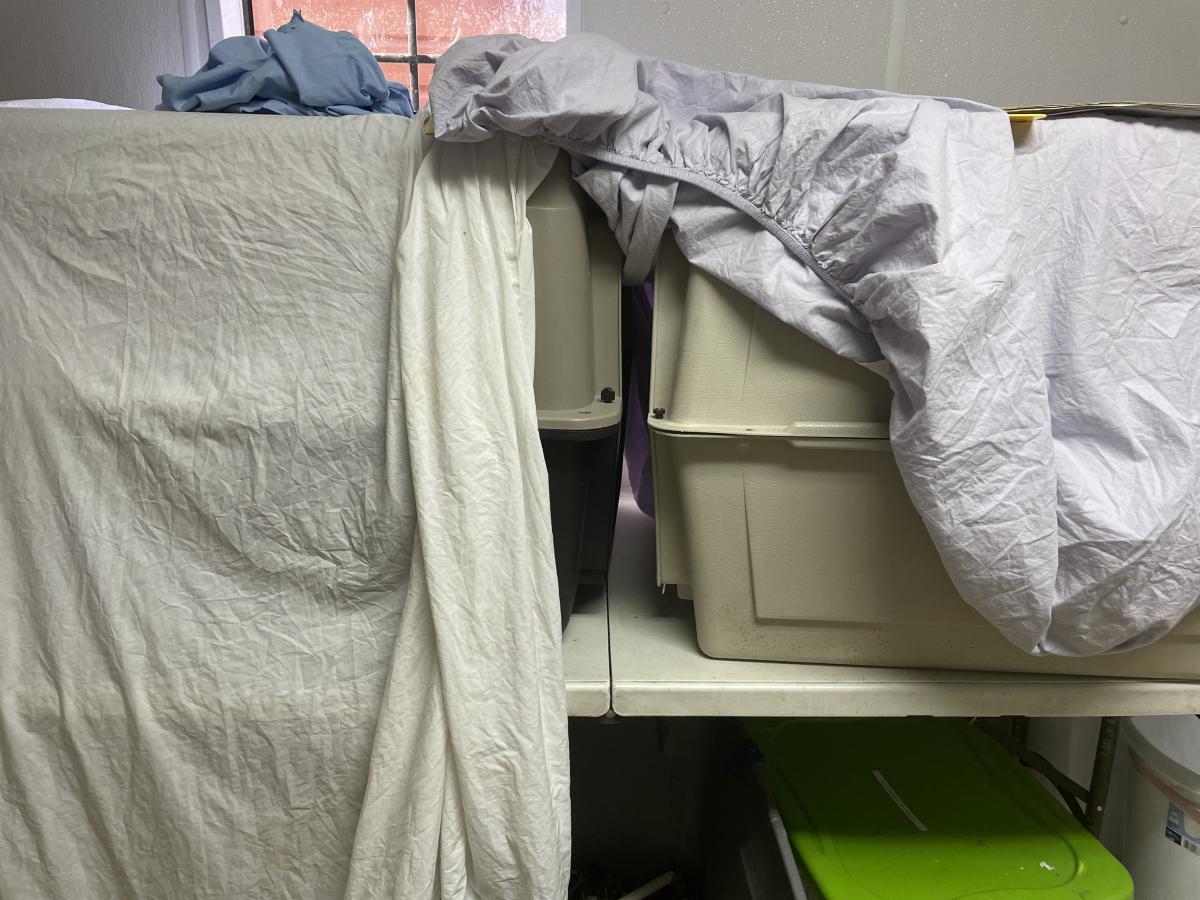 These owls, along with Papa, are being housed in expanded ICU. Due to their small size, hatchlings have difficulty with thermoregulation, and would normally be kept warm by their mother in the nest. Because their mothers are not around, these babies must be housed indoors until they are old enough to maintain their own body heat.  As their feathers grow and temperatures warm to a consistent 55 degrees or above, these little owls will begin acclimating to the outdoors. 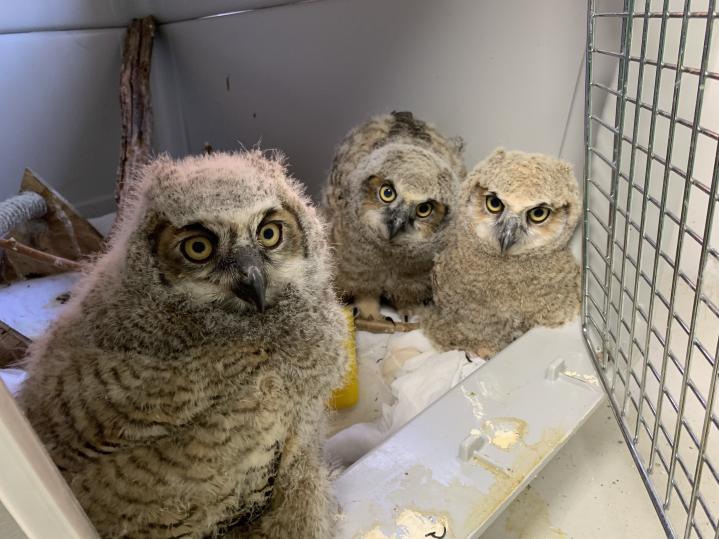 The owls receive 100 grams of chopped mice every day, which will help them to gain weight and strength as they grow and mature. Attempts may be made to re-nest one of these owls in the near future, and more hatchlings may arrive at the Center for care and rehabilitation as the season continues.

Your donation will help provide veterinary medical care to these orphaned Great Horned Owls  ... and more than 3,000 patients that will be admitted this year. Thank you!

During the past month, Papa G'Ho has continued to rear Great Horned Owl fledglings #21-0308, #21-0292, and #21-0245 in outdoor flight pen A2. Critter Cam viewers have seen these young owls grow and develop while they practice flying, preening, perching, and socializing with one another. On September 1, the rehabilitation team began exercising the fledglings once per day. After several weeks of exercise and observation from the staff, wildlife rehabilitation intern Ben noted that all of the fledglings are progressing very well in building their physical stamina and flight techniques.

On September 13, though, the fledglings' exercise regimen was temporarily discontinued. Critter Cam viewers, veterinary, and rehabilitation staff became aware of a skunk accessing the owls' enclosure at night. Skunks are predators that possess considerable digging skills, and are a significant threat to both patients and resident education ambassadors at the Center, though in this case they could also be a prey item for hungry Great Horned Owls! For now, the three fledglings and Papa G'Ho have been transitioned into a smaller, secured outdoor area.

After identifying where the skunk had been entering the enclosure, rehabilitation staff left a humane trap inside the flight pen overnight. While efforts were unsuccessful in containing the skunk, a wild Virginia Opossum -- also a nocturnal predator -- was found in the trap the following morning.

The hole is currently being repaired by Lantz Construction Company -- conveniently, construction crew members were already on-site working to complete a number of projects related to The Great Rebuild! After repairs are completed, Papa G'Ho and the fledglings will be transitioned back into flight pen A2 and resume exercising.

The three young Great Horned Owls have been doing well in the Center's A2 flight pen during the summer. The birds are eating well, growing in their flight feathers, and learning how to fly. The rehabilitation staff will start the owlets' daily exercise in September in preparation for a fall release. In the meantime, Critter Cam viewers may catch a glimpse of the owl family on Critter Cam 2!

The Wildlife Center’s Great Horned Owlet count has doubled, from three to six, thanks to a transfer from a wildlife rehabilitator in Chesapeake, Virginia on May 8.

These owls were transferred to the Wildlife Center as a group of three, and upon admission were bright, alert, and responsive with correct behavioral responses to human presence. Dr. Sarah also noted that #21-1070 and #21-1068 both had adequate body condition and hydration levels. Additionally, the veterinarians elected to test owlet #21-1068 for lead levels; results were low enough to indicate that the other two owls did not need to be tested.

Radiographs of fledgling #21-1069 showed a fracture in the left wing, prompting the veterinarians to carefully wrap the wing in a stabilizing bandage to help support the bone while it healed. The owl was given a daily dose of pain medication, and the wrap was monitored and replaced when needed. Additionally, to keep the owl from moving around too much during the healing process, it was kept in a crate rather than being given access to an entire outdoor pen. On May 21, after repeat radiographs showed that the fracture had healed well, the decision was made to stop giving pain medication and the wrap was removed. No other abnormalities were seen, and no other tests were performed.

The three owls are fed 150 grams of mouse each day and are sharing Flight Pen 5. There is potential to move them to A2 to be with the original three owlets, and their surrogate adult Papa G’Ho, but for now they will remain on their own.

The other three owls, #21-0308, #21-0292, and #21-0245 remain in A2 under the dedicated care of Wildlife Center rehabilitators and the watchful eye of Papa G'Ho. One thing worth noting, however, is that all three of the original trio of owl hatchlings are undergoing the process of molting their baby feathers and growing larger, sturdier flight feathers which will allow them to better move about their enclosure and, eventually, the forests in which they will fly once they are back in the wild.

The three owlets, accompanied by Papa G’Ho, have now been moved to A2, one of the Center’s largest bird pens. This will allow them to continue to spread their wings, as well as have more space to spread out in general. As time passes, these owls will spend less time in close proximity to one another, a natural sign of behavioral maturation. In the wild, adult Great Horned Owls are solitary, and eventually, these young owls will be moved to their own pens before their release in the fall.

Another positive result of their recent move to A2 is that the owls can now be viewed on our Critter Cams! Watch them grow here. 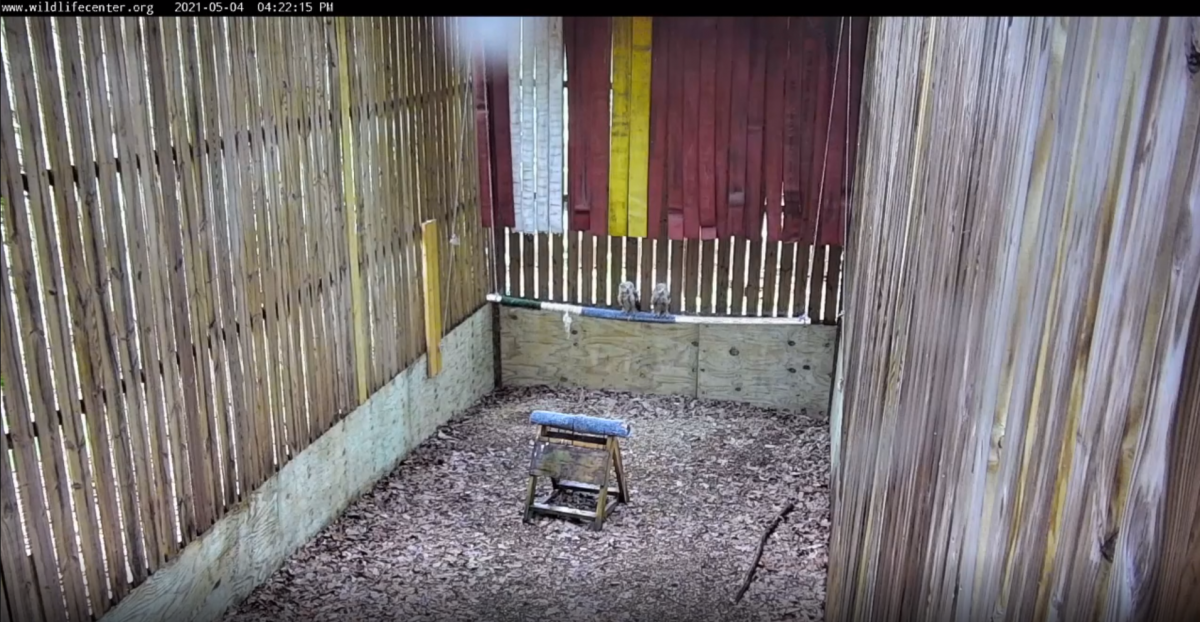 The three little Great Horned Owlets have taken a big step toward their eventual release into the wild! These three little owls, along with their dedicated surrogate Papa G’Ho, have been moved from their small crates indoors into the much larger Flight Pen 2. This not only gives these rapidly growing owlets space to spread out and practice their movement but also puts them even farther from consistent human activity. This will help ensure that they will not become too accustomed to human presence; a behavioral adaptation which could delay or prevent their release.

The Center’s rehabilitators continue to monitor these three healthy owlets, presenting the three of them with 230 grams of chopped mice per day. These nutritious and delicious daily meals will support their growth as they continue to develop into mature young Great Horned Owls.