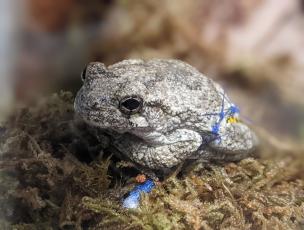 On April 24, the Center admitted an adult Gray Treefrog from Henrico County. The frog was found on a table in a private citizen's backyard and appeared to have an injured leg. On admission, the front-desk staff immediately placed the frog in a specialized holding container to keep the frog’s skin moist until the veterinary team could examine it.

After a brief period in the waiting room, Center veterinary intern Dr. Jenn examined the frog and saw that its left hind leg appeared slightly splayed, with noticeable swelling around its femur. A radiograph revealed that its femur was fractured. The exact cause of the frog's injury is unknown but likely related to physical trauma.  Dr. Jenn started the frog on a course of morphine to alleviate its pain and anti-inflammatories to reduce its swelling, then moved it to the Reptile Room and placed it in a tank specifically set up for amphibians.

Usually, amphibians with this type of injury are not able to recover; their small size makes stabilizing fractures difficult, and amphibians can be very fragile patients that do not do well in rehabilitative care. However, Dr. Jenn is attempting a form of treatment not commonly performed at the Center. On April 25, Dr. Jenn anesthetized the treefrog to surgically adhere its left hind leg to its body. By doing this, the frog will not be able to move its left hind leg, which Dr. Jenn hopes will allow its fracture to heal properly.

So far, the frog's sutures have remained intact and the frog has appeared active and bright. The frog will remain inside the hospital’s Reptile Room where veterinary staff will continue to closely monitor its incision site for any signs of infection; its prognosis is poor due to its fracture.

Your donation will help provide veterinary care for this injured Gray Treefrog ... and more than 3,700 patients that will be admitted this year. Thank you for your support!