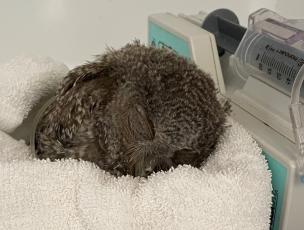 On April 12, a visitor at Booker T. Washington Park in Charlottesville found a young fledgling Eastern Screech-Owl on the ground. The bird appeared to be abnormally quiet, so the rescuer took the young owl to Veterinary Emergency Treatment Service & Specialty [VETSS].  The bird was transferred to the Wildlife Center of Virginia the following day.

The veterinary team examined the owl when it arrived and found that the bird was quiet and minimally responsive. No significant external injuries were found, and the team decided to run a blood lead test, which came back positive at 0.24 ppm -- a significant amount of lead in the tiny owl's system. Historically, the Center staff have routinely run in-house lead tests on all eagles, vultures, and loons -- all species that are very prone to ingesting lead fragments that cause lead toxicity. In 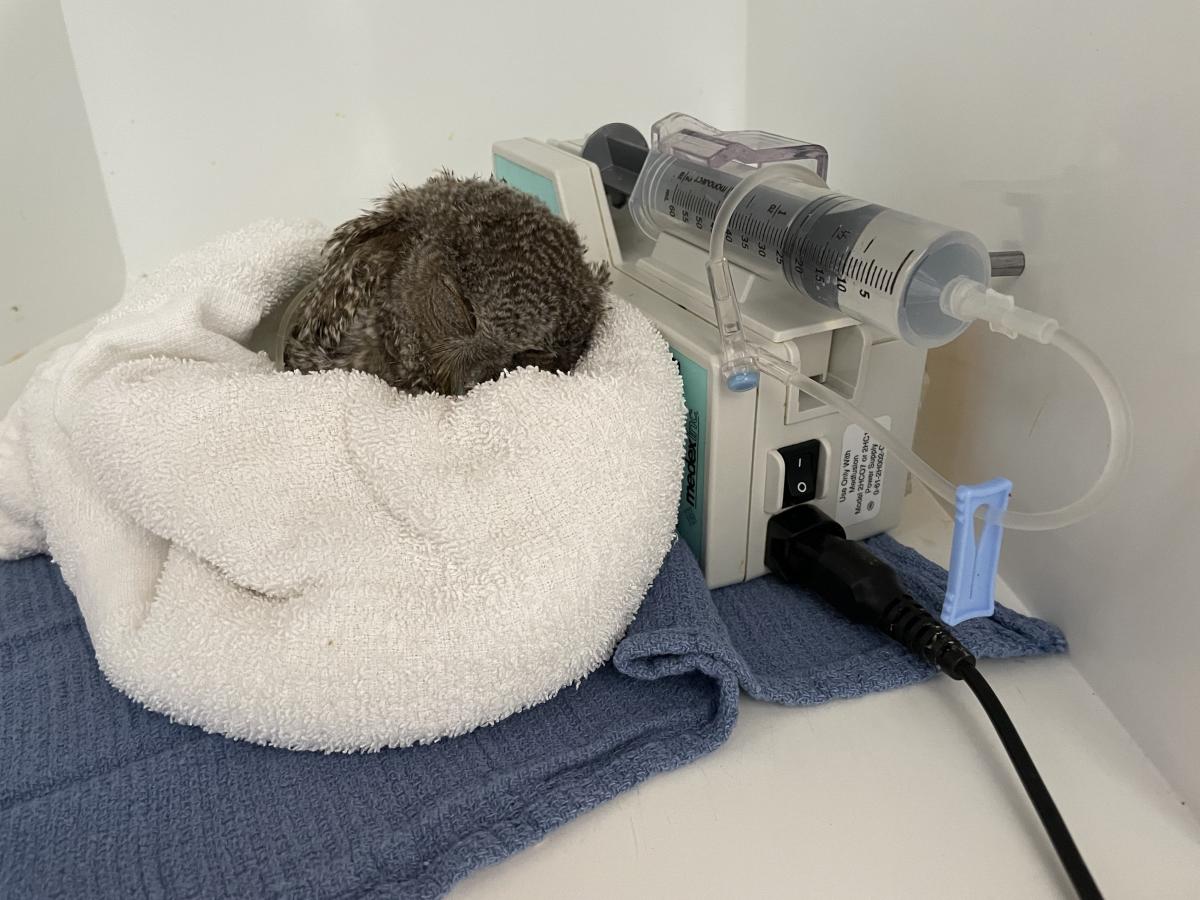 the past year, the staff have expanded to testing all admitted raptors during hunting season, as well more readily running lead tests on many different species if any potential symptoms are observed. Recent research in the wildlife medicine field has indicated that lead toxicity is an issue for many different species -- including mammals and reptiles too.

The owl started a five-day course of chelation therapy, to "scrub" the lead from the bird's system, and the owl was placed in the Center's critical care chamber to receive additional oxygen therapy. In the days following its admission, the owl remained quiet but alert, and is exhibiting a significant head tilt. A follow-up lead test on April 19 revealed a "low" result, indicating that the chelation therapy was successful. The veterinary team has been considering removing the owl from the additional oxygen therapy if the bird continues to maintain its condition.

Your donation will provide veterinary medical care to this young owl ... and more than 3,000 patients that the Wildlife Center will admit this year. Thank you!

In August, Dr. Karra made the official decision that Eastern Screech-Owl #21-0509 was non-releasable due to permanent neurologic deficits. Since the outreach department has been open to accepting a new education screech-owl ambassador, Vice President for Outreach & Education Amanda decided to start an assessment to see if this owl could be a good fit. The owl would need to pass multiple assessments, including close behavioral observation to ensure it could navigate from perch to perch adequately and take care of itself.  That evaluation process also included the start of the long training process of learning to step up on a handler’s glove, and ultimately, to be comfortable on a glove in front of a crowd of people.  While the training process for non-releasable raptors can vary with species, age, and the individual animal, screech-owls tend to take many months to train. Although screech-owls may seem “easy” due to their small size, screech-owls can become easily overwhelmed and stressed in a captive setting; they are not only small predators but also prey for larger raptors.

In mid-August, Amanda started working daily with the screech-owl; initial training included moving the owl onto a daytime feeding schedule and eating its mouse in shorter windows of time. The owl adapted well to this shift in feeding, and by mid-September, the small owl was beginning to eat tidbits of food with Amanda present. By early November, the owl was ready to step up on Amanda’s glove for the first time – a big milestone in training. Overall, the owl is making excellent progress and showing every indication that it will be a good candidate as an education ambassador. 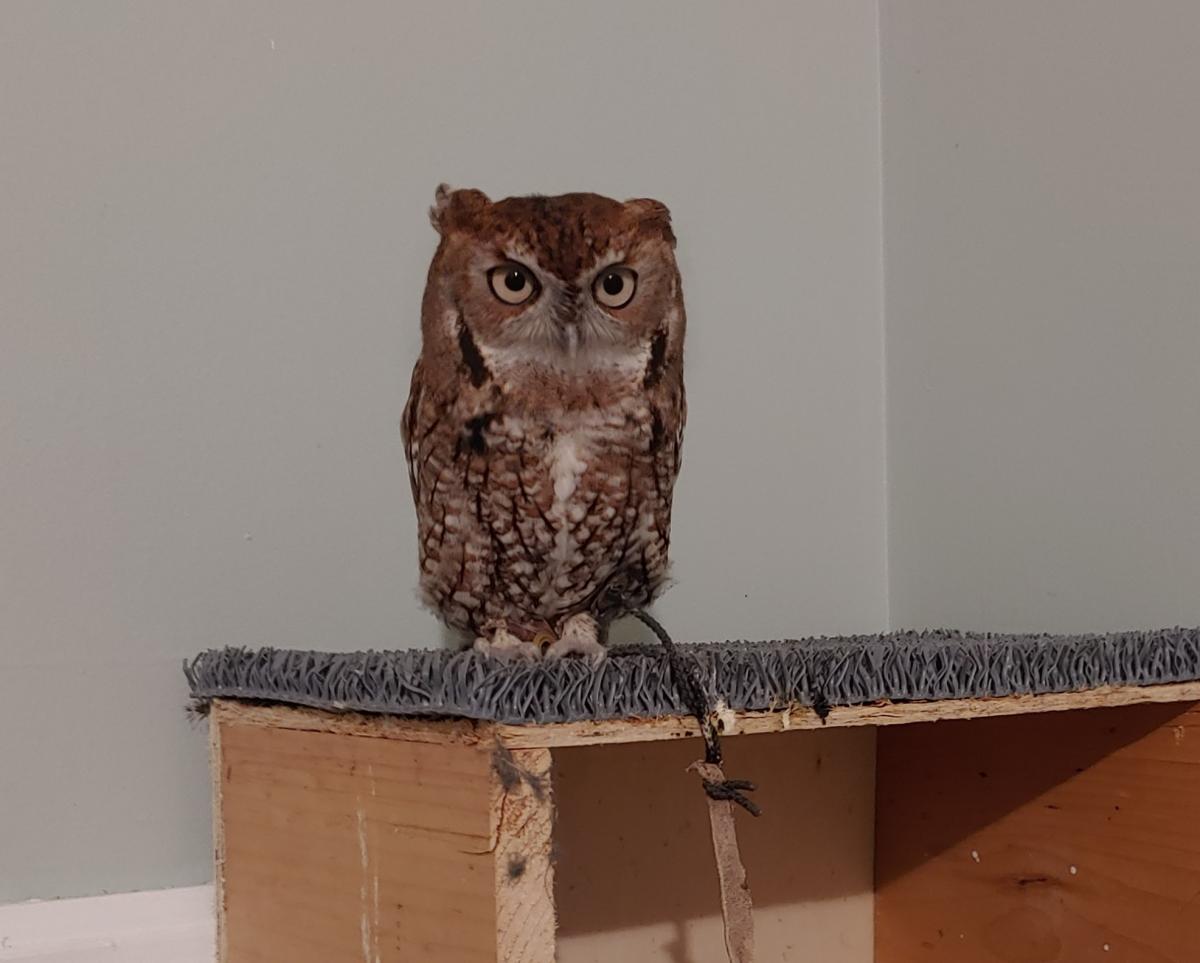 Eastern Screech-Owl #21-0509 has been doing well in his enclosure, along with several other young screech-owls. The bird no longer has any discernable head tilt, can successfully feed himself, and has been able to move to different perches within the enclosure. Within the past two weeks, the staff began a regular exercise program for all young owlets, in preparation for releasing them sometime during August. Unfortunately, the staff quickly discovered that, in a larger flight space, the Eastern Screech-Owl is having difficulty flying and navigating a larger space. The bird often flaps and lands on the ground, using its wings to balance itself, and generally seems disoriented.

Sadly, it's likely that the lead toxicity has had permanent neurological effects on the young owl; given the extremely debilitated condition of the bird at admission, and many rounds of treatment for intermittent increased lead levels, it's not surprising that this bird has these issues. A recent blood draw and lead test revealed a slightly elevated lead level again; the staff started yet another course of treatment for the bird while the staff makes some long-term decisions for the owlet. There is a small chance that the bird may be suited for placement as a non-releasable owlet, though a complete assessment will need to be made, along with a review of all medical issues, including neurological defects.

Eastern Screech-Owl #21-0509 has been doing well in one of the Center's B-pens, along with three other owlets. The owlet's severe head tilt has improved in the past two weeks, though a slight head tilt remains. The owlet has not yet started a daily exercise program since its flight feathers are still growing, but the rehabilitation staff have observed the young bird making short flights around the small flight enclosure. The bird is able to navigate to and from different perches.  Maneuvering around obstacles and other owlets is sometimes challenging for the young bird, and the staff note that the bird's movements are not as seamless and fluid as they should be. Compared to the other owlets the bird is housed with, #21-0509 appears a little "off", though the staff have been pleased with the overall progress of the bird since its admission.

During the past two weeks, the veterinary team has carefully monitored Eastern Screech-Owl #21-0509 for signs of improvement. The young bird still has a significant head tilt, though the team feels that there was a slight improvement after multiple weeks of wearing a small neck brace. Another lead text on May 26 revealed a "low" level, indicating that perhaps the lead has finally been removed from the young bird's system.

The owlet continues to eat well, and has been living with several other young screech-owls in the Center's care, including owlet #21-1102. The cohort will likely be moved to an outdoor enclosure in the next few days, where they will all continue to be carefully monitored. The team hopes that owlet #21-0509 will continue to improve, though its condition is still guarded due to the severity of the head tilt.

Eastern Screech-Owl #21-0509 has been continuing to recover from lead toxicity and associated neurologic issues. The young owl has had a number of lead tests to re-check blood lead levels; while some tests have returned at "low" levels, subsequent tests revealed an elevated level of lead again. Since lead accumulates in the bones of affected birds, treating lead in some individuals can be a prolonged process.

The young owl also still has a severe head tilt; the veterinary team decided to apply a small neck brace to the owl to see if additional support, combine with physical therapy, would improve the owl's condition. Hospital cam viewers were able to watch the treatment of this young owl this past week!

Eastern Screech-Owl #21-0509 has remained in the Center's indoor Hold area during the past 11 days, where veterinary staff have been keeping a close watch on the bird's overall condition. On May 5, an secondary set of radiographs were taken, identifying a skull fracture that the veterinarians suspected may have been present on admission. While the precise circumstance of this injury is not known, it's possible that lead toxicity left this fledgling owl more susceptible to physical trauma.

Veterinary staff report that the owl's ability to perch on its own has improved, but its severe head tilt continues to be a significant barrier to feeding and eating. Due to these rehabilitative challenges, the prognosis for this owl's full recovery is poor. Center veterinarians plan to perform an in-depth exam to assess this patient's plan of care on May 10.

During the past week, Eastern Screech-Owl #21-0509 has made some slow improvements. The little owl no longer requires oxygen therapy and is able to be housed in a crate, where the bird is generally quiet, alert, and reactive. The owl still has a significant head tilt, which has made feeding an enormous challenge. The owl can ingest very small pieces of food and is able to partially hold onto larger pieces of food and tear off small soft bites. The owl has a hard time tearing through the tougher mouse skin, due to the angle of the head tilt. The staff are encouraged by the owl's progress. 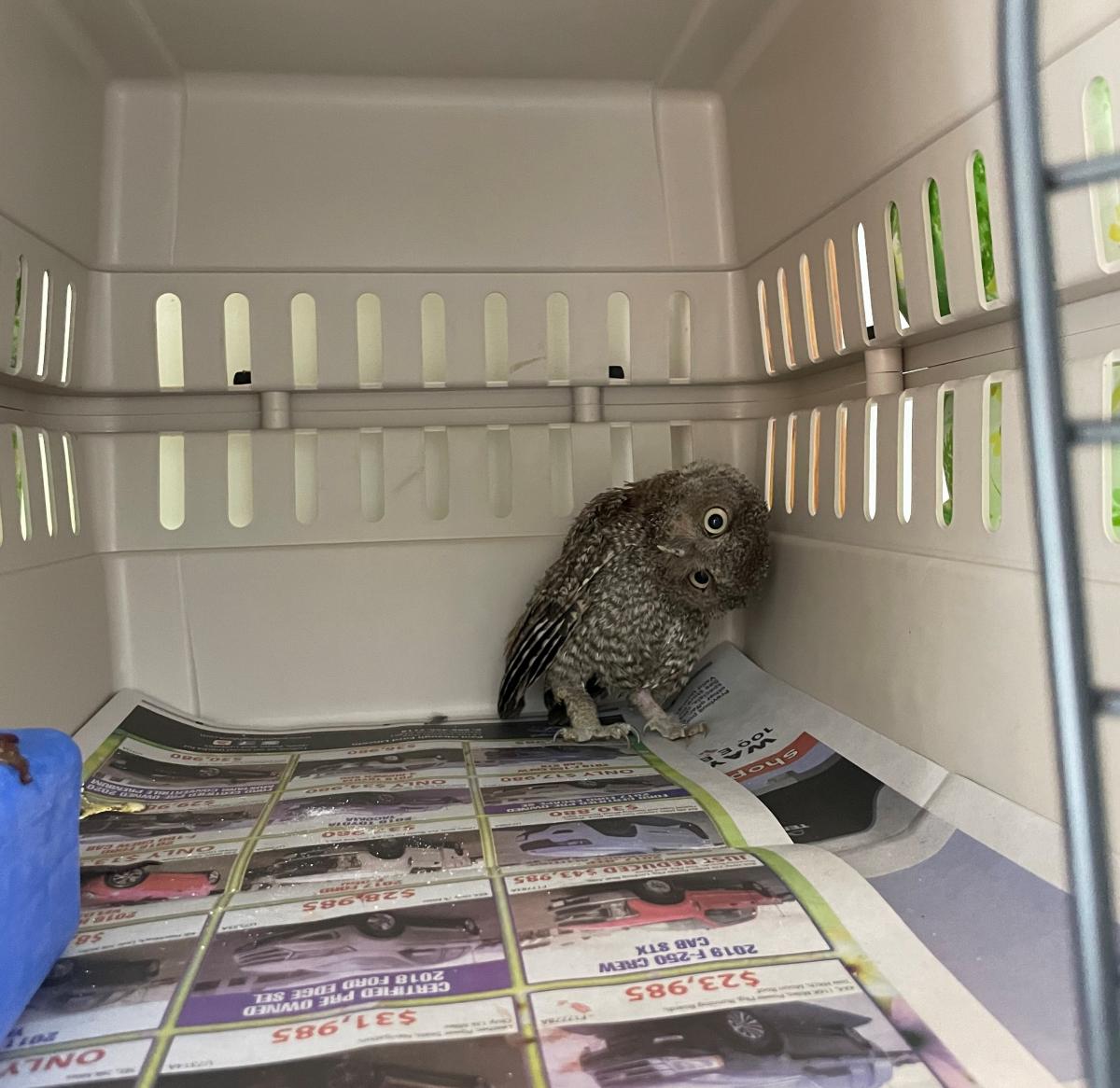 On April 23, more blood was drawn to run another lead toxicity test; results came back at .036 ppm. While this lead level is not as high as what it was at the owl's admission, no level of lead is safe in a bird's system, so the owl began another course of chelation therapy. Another lead test will be performed on April 29.