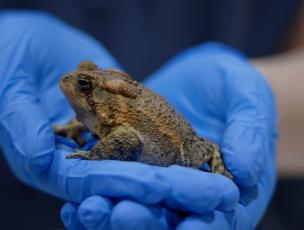 On October 29, a private citizen in Crozet, Virginia was mulching their garden when they accidentally hit an Eastern American Toad with a pitchfork. After realizing the toad was injured, they immediately placed it into a container and brought it to the Wildlife Center.

Eastern American Toads are a large species of toad commonly found throughout the eastern  United States.  In October, as the weather gets colder, these toads dig down into the soil to hibernate through winter. This toad was likely hibernating under the mulch in the rescuer's garden.

On admission, the toad was alert and responsive, weighing in at just 34 grams. Veterinary intern Dr. Marit examined the toad and found two open wounds on the underside of its body. She immediately sedated the small amphibian for surgery, and, using specialized equipment, cleaned and sutured the toad's wounds. After the surgery, Dr. Marit started the toad on a course of anti-inflammatory medication and placed it in the Center's reptile room to rest.

The following week, staff noticed some reddening and necrotic tissue forming around the toad's suture sites. The vet team started the toad on a course of broad-spectrum antibiotics, and on November 11, vet staff performed a second surgery to remove the necrotic tissue. By early December, the wounds had completely healed. 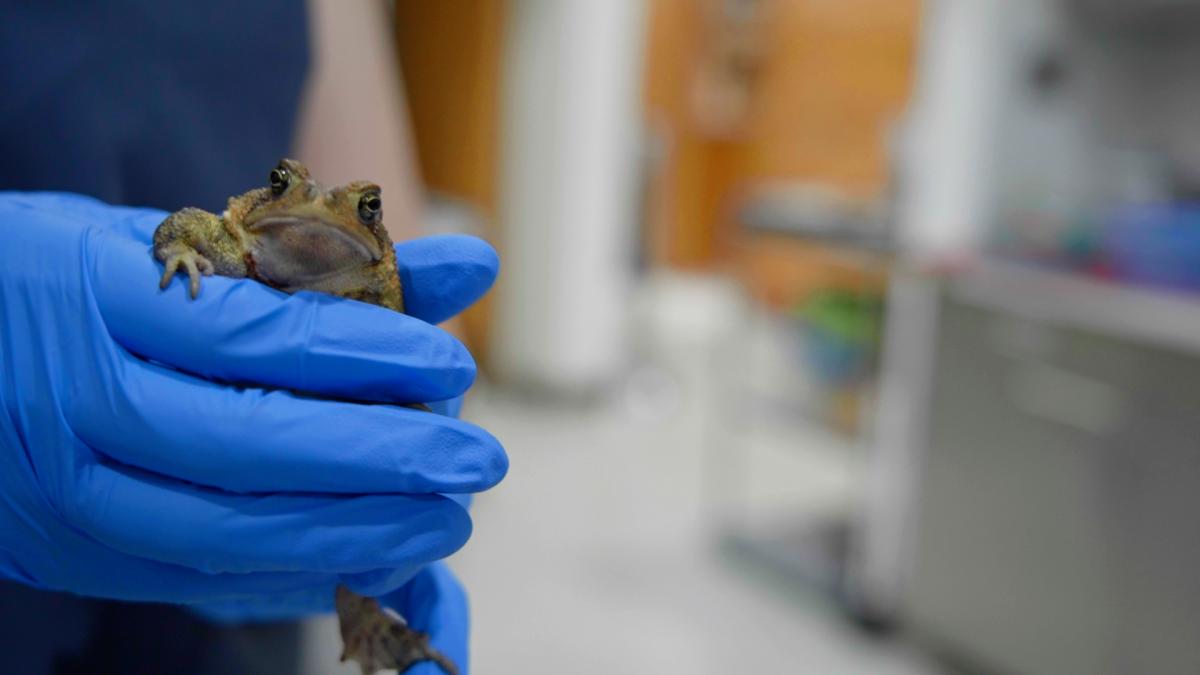 Currently, the toad is staying in the Center's reptile room, where it will stay until late spring when the temperature is warm enough for release. The toad has been active and increased its weight to 48 grams since being admitted. Though the toad's wounds have healed well, its prognosis is still guarded; amphibians are fragile species, and there is still the possibility that the toad will develop complications from its injuries.

Check out the video of the toad and Dr. Marit!

Your donation will help provide veterinary medical care to this injured toad ... and to more than 3,600 patients that the Wildlife Center will admit this year. Thank you!

Eastern American Toad #22-3473 has continued to do well! During the past two months, the rehab team has kept a close eye on the toad and has not seen any complications from its injuries. The toad is currently receiving 2.5 grams of mealworms per day and has increased in weight to 54 grams. Barring any setbacks, the rehab team will continue caring for the toad until spring when temperatures are warm enough for release.