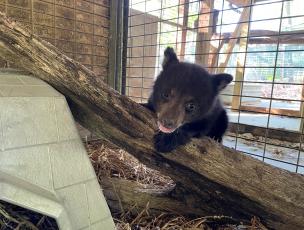 In April 2022, the Wildlife Center began admitting this year's bear cubs from several locations throughout Virginia. The young bears will be cared for by the Wildlife Center until spring 2023, at the time when they would begin naturally dispersing from their mothers.

To limit human interaction, only a few staff care for the bear cubs. Depending on their age and condition when they arrive, cubs may live in a Zinger crate indoors, in the Center’s Large Mammal Isolation enclosure, or in the Center’s Black Bear Complex. The Center has some set weight guidelines that help determine when cubs are ready to move to their next stage of housing; usually cubs move into the Large Mammal enclosure when they are more than 3.0 kg [typically in May] and are large enough to move to the Black Bear Complex when they are more than 10 kg [typically in July]. Cubs also must be weaned from formula before they are moved to the Black Bear Complex, where they have a half-acre of forest to explore.

Before cubs ultimately move to the Black Bear Complex, they are ear-tagged with a temporary colored tag so that the Center staff can monitor and identify the cubs from a distance.  Staff prefer to ear tag cubs when they are around 5.0 kgs, which means smaller cubs admitted earlier in the spring typically don't receive their tag until they are anesthetized for the move to the Bear Complex in the mid-summer.  For smaller cubs admitted during the spring months, the staff clip a small amount of fur on each bear and then paint the bare spot so that the bears still have a temporary identification system. As larger cubs are admitted in late spring/early summer, they may be ear-tagged at admission before joining the other bear cubs.

Ultimately, most colored ear tags are removed prior to release and are replaced with permanent green ear tags from the Virginia Department of Wildlife Resources, which identify the bears as rehabilitated cubs.

Check out the Cub Cam!

Your donation will help provide long-term rehabilitation and care for these special patients. Please help!

The three Black Bear cubs currently housed in the right side of the Large Mammal enclosure have been doing well during the past week. The cubs are quite active and Critter Cam viewers have been able to watch these three cubs play and explore together. 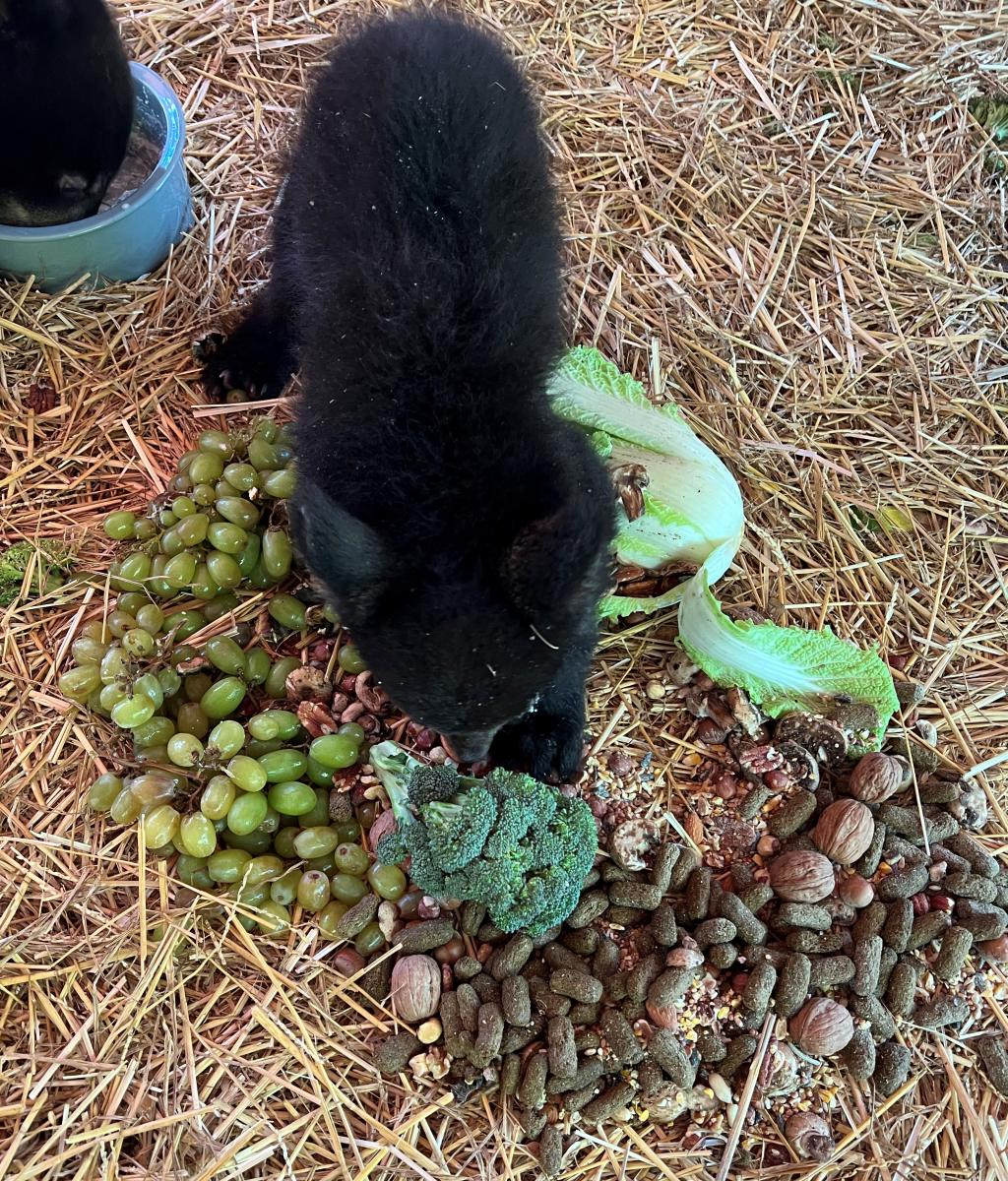 Black Bear cub #22-1448 [Double Orange Tags] remains in the Center's bear pens, and the rehabilitation staff report that he has been calm and eating well. It's likely that he will be moved to the Black Bear Complex in early July. The staff are currently working with contractors to do some maintenance in the complex, including some plumbing repairs and rehanging the shade cloth privacy fence on the perimeter. The staff are also currently moving and assessing Critter Cams; at this point, it appears as though one of the two complex cams may be out of commission and needs to be replaced.

During this past weekend, the rehabilitation staff decided to move Black Bear #22-0462 to the right side of the LMI, to be with the two smaller cubs in care. Cub #0462 had been housed with cub #22-1448 [Double Orange Tags], though the newcomer had continued to show no desire to interact with the cub, but did exhibit some pacing behavior. The three cubs in Large Mammal started interacting and playing at once.

On June 7, the wildlife rehabilitation team weighed Double Orange tags and found that he had lost a kilogram of weight; his appetite has not seemed particularly strong at the Center. The team decided to move the bear to the Center’s Bear Pens; while this is a smaller enclosure, it’s also quieter, with fewer distractions. The rehabilitators set up a trail cam in the Bear Pen to monitor the bear’s behavior overnight.

When the team reviewed the footage on the morning of June 8, they found that the cub had very quickly eaten most of his meal when he was let out of his crate in the bear pen. Footage throughout the evening showed that he appeared to be calmly exploring the space. At this point, the team will keep monitoring the bear’s behavior and will plan to keep him in this location until he moves to the Black Bear Complex, likely later this month.

The three other cubs in the Large Mammal Isolation enclosure are doing well and continue to eat and gain weight.

During the past week, the cubs in the Center’s LMI enclosure have continued to gain weight. As of June 2, weights were:

The smallest cub, female #22-1087, is now large enough to live in one of the main Large Mammal Isolation enclosures.

The Center also admitted two more cubs in the past few days – Black Bear cub #22-1448 [Double Orange] is a healthy male cub that is well-matched in size for Black Bear cub #22-0462. These two will live together in the left side of the Large Mammal enclosure.  The two smaller cubs -- #0685 and #1087 – will live in the right side of the Large Mammal enclosure. This way, the cubs can continue to see and smell each other, but they are separated for now due to the large size difference.

Another recent cub admission, Black Bear cub #22-1376, has a fractured humerus and will need to remain in a Zinger crate immediately after his June 2 surgery.

The three Black Bear cubs at the Wildlife Center are doing well – all three are eating and gaining weight. Black Bear cub #22-0685 [shaved shoulder], the second male cub admitted this year, is splitting his time between his two playmates – at night, he is placed into the chute with cub #22-1087 (the small female), and during the day, he romps and plays with the largest cub #22-0462. 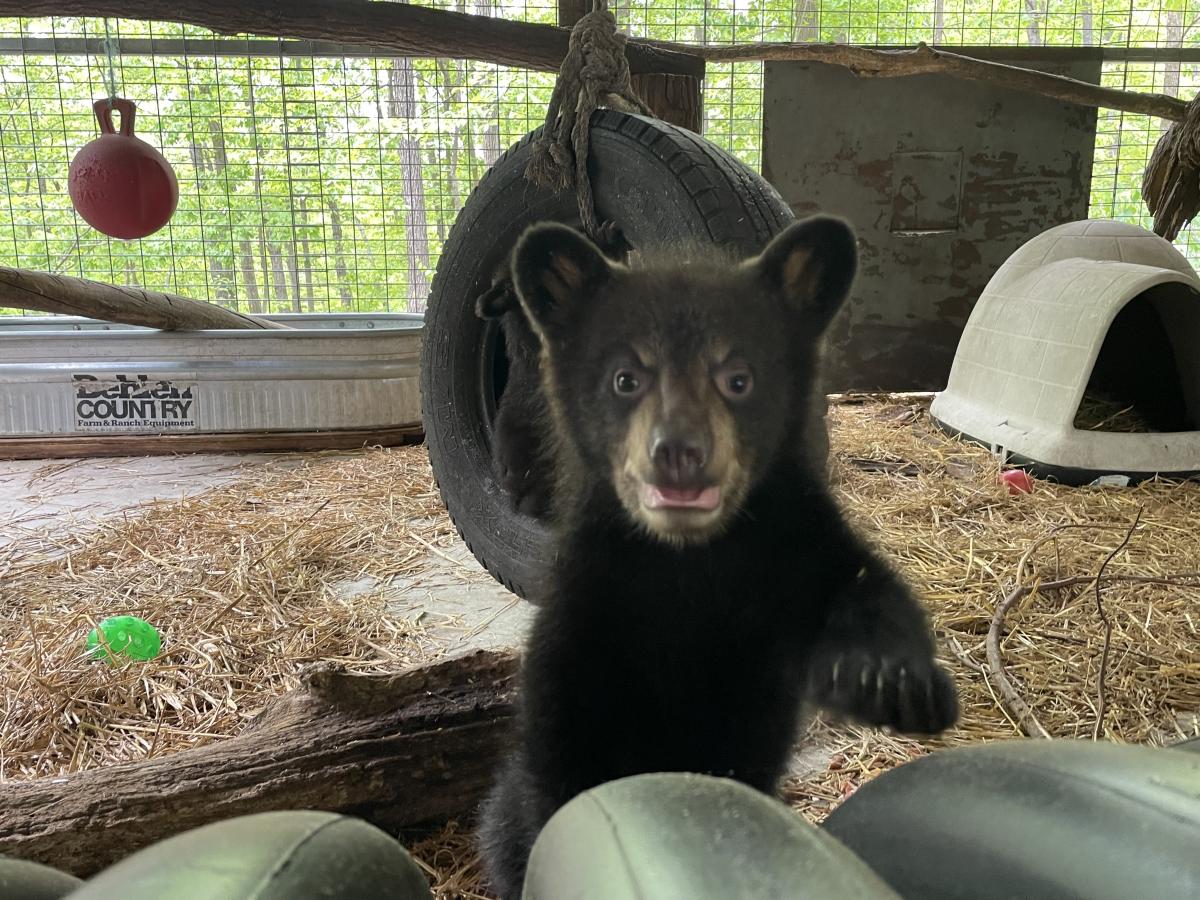 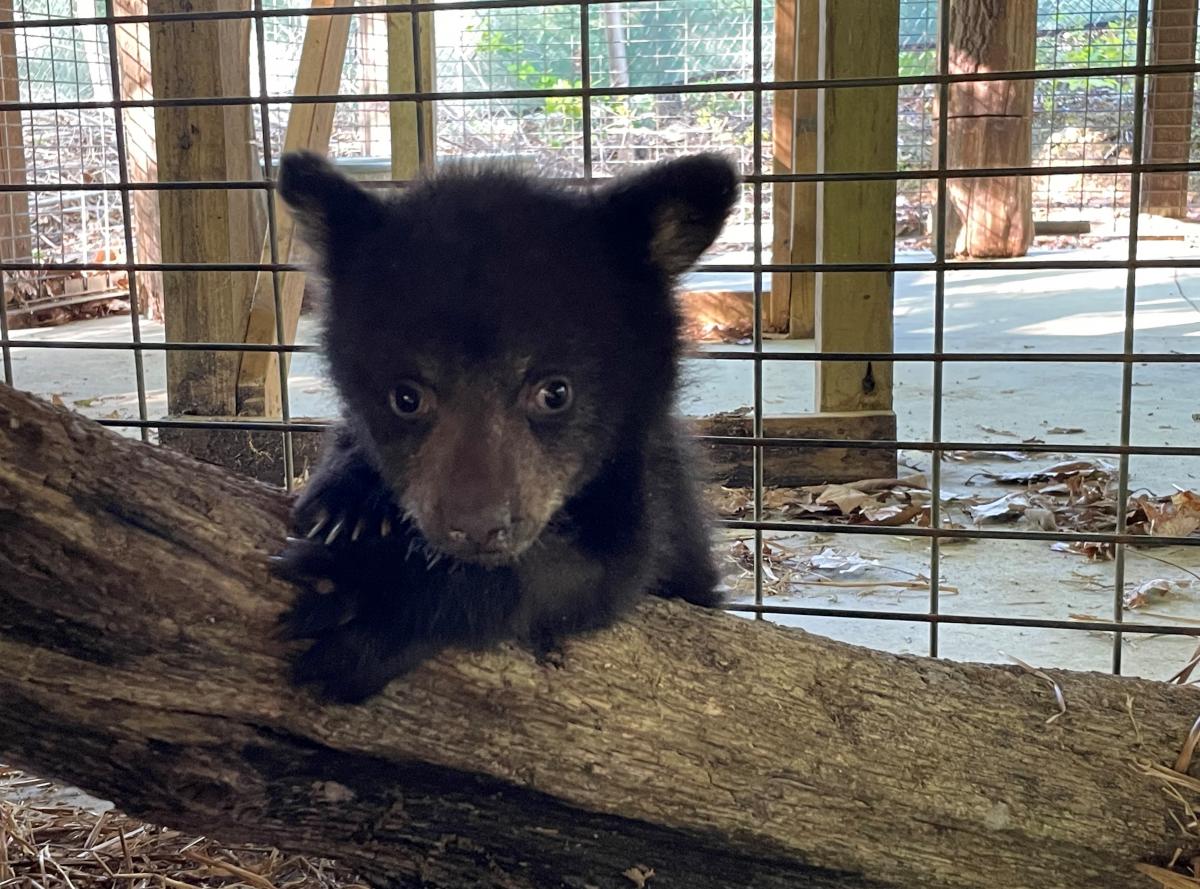 The smallest cub will be able to spend time in the larger enclosure with the other cubs once she’s gained more weight.

The first two Black Bear cubs of 2022 are doing well -- both are eating and gaining weight! With consistently warmer temperatures, both bears were moved to the Center's Large Mammal enclosure on May 11. They were transported in the Center's brand-new Polaris! 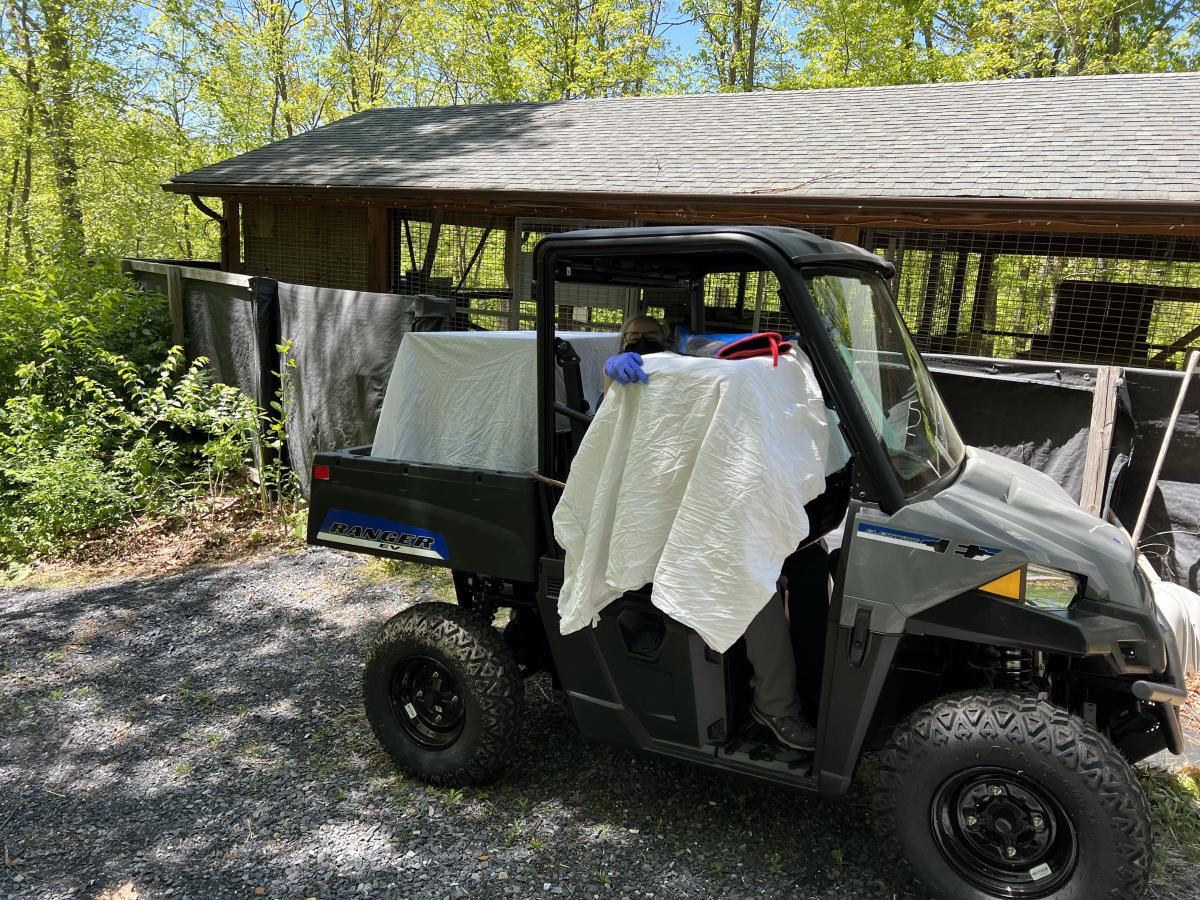 Black Bear cub #22-0462, the first cub admitted this season, was placed directly in the left side of the 16' square enclosure, so that he can run, play, and climb. Black Bear cub #22-0685, the much smaller second cub, was placed in the connecting chute [measuring 4' x 8'] between the two sides of the enclosure. Due to the cub's small size, the rehabilitation staff do not yet want to allow him full access to the left side of LMI, though he can see, smell, and interact with the other cub through the connecting door. As of May 16, cub #0462 weighed 5.95 kg; cub #0685 weighed 2.8 kg.

On May 16, a third cub (#22-1087) was admitted to the Wildlife Center; this new female cub is a good size match for the small male cub. Both will be housed in the chute of the LMI until they gain more weight. Both are currently being fed three times a day.  Until the cubs are large enough to receive identifying colored ear tags, the staff shaved a small patch of fur on each cub to identify them at a glance. Cub #0685, the male, has a patch of fur shaved on his left shoulder.  New cub #1087, the female, has a shaved stripe on her back.

Tune in to Cub Cam to watch these growing bears! At this point, cub #22-0462 will be the main cub on cam until the two smaller bears can join him full-time. Cam viewers may be able to catch a glimpse of #0685 during the day; since he is nearly large enough to be in the main Large Mammal enclosure, the rehabilitation staff are letting him out into the space during the day, but enclosing him in the more protected chute (with cub #1087) at night.  The larger cub is fed a mush bowl once a day [in the morning] and is also currently eating a mixture of fruits, vegetables, and proteins; the two smaller cubs are bottle-fed three times a day.