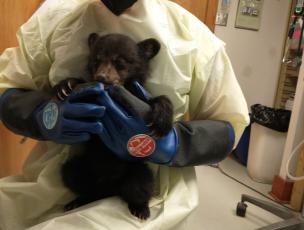 On April 26, property owners in Greene County found a young Black Bear cub in their barn, under a tractor, just hours after a severe storm rolled through central Virginia. There were no signs of the mother bear that evening or the next morning, and after a discussion with the Department of Wildlife Resources, the rescuers brought the cub to the Wildlife Center on April 27.

Dr. Emily, one of the Center's veterinary interns, examined the small male cub when he arrived. The bear was alert and vocal, in thin body condition, and had a heavy burden of fleas and ticks. Blood work, radiographs, and a skin scraping were all within normal limits. The cub weighed in at just 1.40 kg. 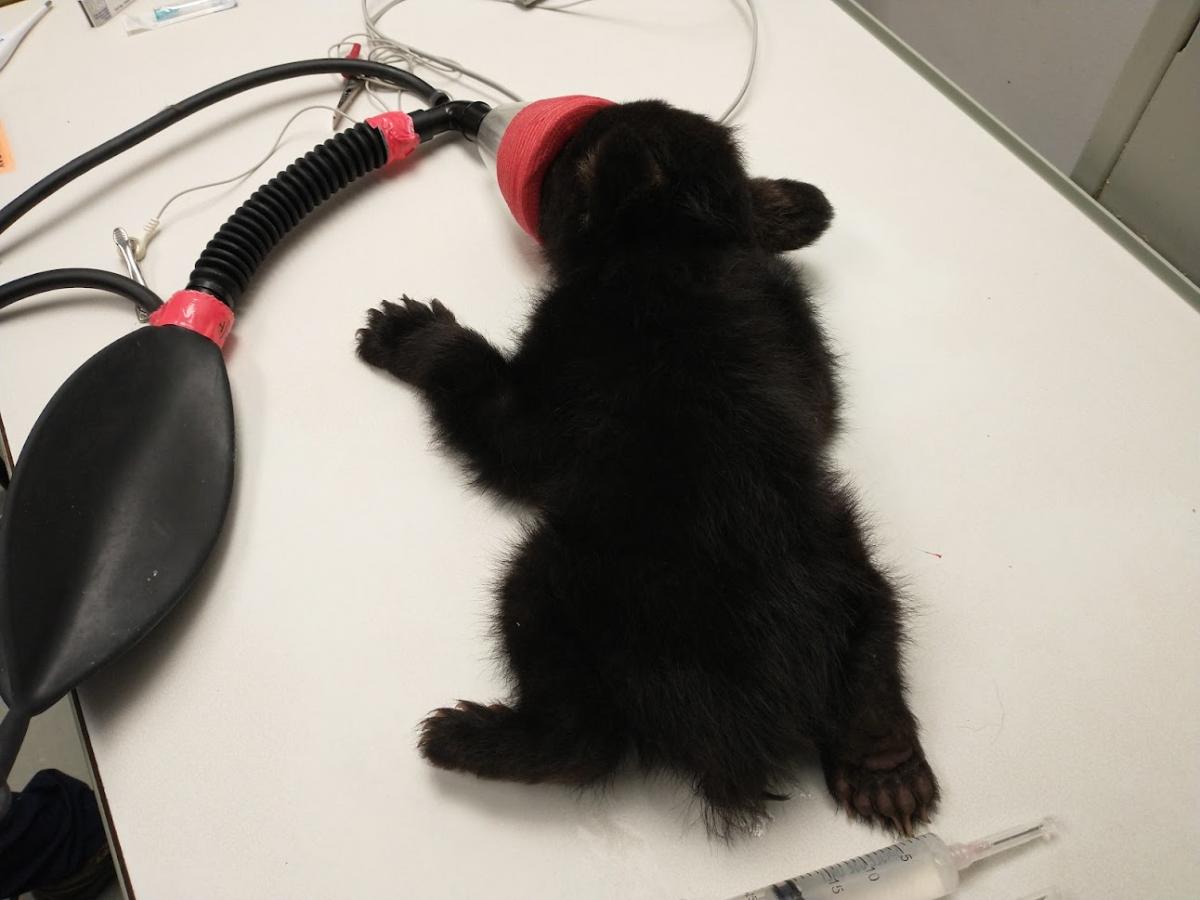 The rehabilitation staff set the bear up in a zinger crate in the same space as Black Bear cub #22-0462 for the night. The following morning, the rehabilitation staff found the little cub unconscious, unresponsive, and cold and rushed the cub into the Center’s clinic for veterinary intervention. The team suspects that the cub was experiencing a hypoglycemic episode – likely the stress of capture, transport, and admission to the Center combined with the underweight cub’s thin body condition caused the severe reaction overnight.

The veterinary team immediately provided intensive care for the cub on the morning of April 28, working to revive the young bear. They worked to warm the bear’s low body temperature with heating pads and the Center’s new Bair Hugger, and administered both subcutaneous and intraosseous fluids with dextrose. The bear’s blood pressure was too low to place an intravenous catheter, but after about a half-hour of intensive care, the little cub began to recover. 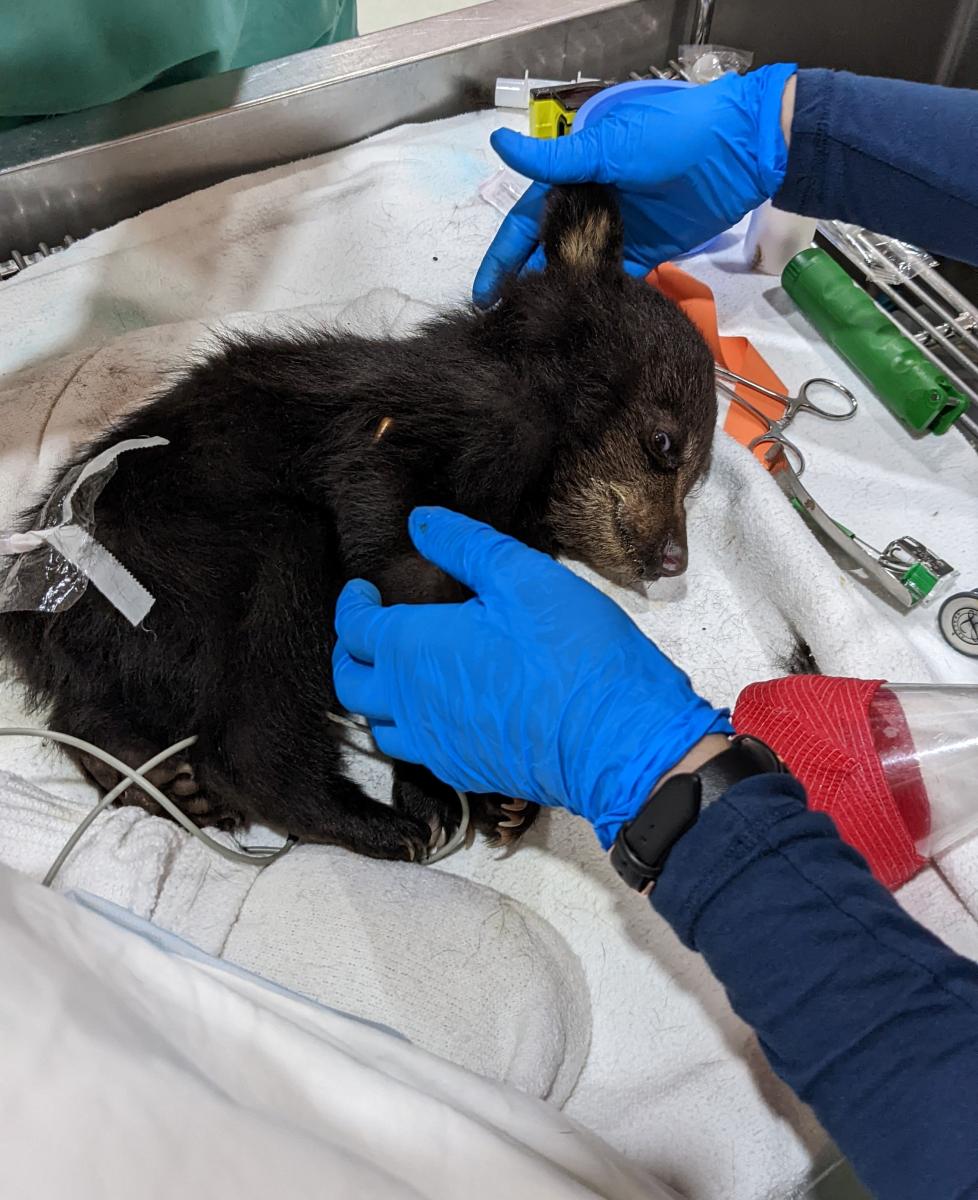 The cub spent the next two days in an incubator in the Center’s holding room, and the staff carefully observed the bear, offering many small meals throughout the day and evening. Despite being underweight, the cub was turning away from food, so the veterinary team offered an anti-nausea medication, which appeared to help. The veterinarians also started the bear on an injectable course of antibiotics to treat any potential septic infections.

On Saturday, April 30, the bear was well enough to return to a Zinger crate, near Black Bear cub #22-0462. The bear is much improved from Friday morning, though his prognosis still remains guarded as he recovers. The staff note that he is a picky eater and is reluctant to nurse from a bottle, though the bear will drink formula from a bowl fairly well, as long as it’s made more tempting with a small amount of strawberry syrup and applesauce.

Your donation will help provide long-term care for this young Black Bear cub ... and more than 3,800 patients that the Center will admit in 2022!

During the past week, Black Bear cub #22-0685’s condition has improved. Rehabilitation staff report that the cub was happy to eat his meal on the morning of May 1 after being transitioned back to a Zinger crate near Black Bear cub #22-0462. The cub is still underweight and in thin body condition, but his appetite has continued to grow throughout the week, resulting in a slight increase in weight. On May 5, the cub weighed in at 1.70 kg -- 30 g heavier than his intake weight of 1.40 kg.

Between scheduled feedings, both cubs are now having supervised play sessions together in their sheltered outdoor space – an important aspect of proper development in young bears. For now, the cub will remain under close observation by the veterinary and rehabilitation staff at the Center.