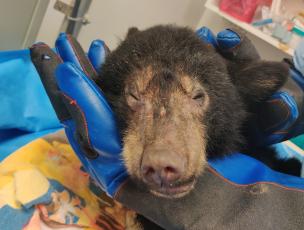 On Friday, November 20, a private citizen observed an underweight, weak Black Bear cub in Greene County. The Virginia Department of Wildlife Resources placed a humane trap in the area, successfully capturing the bear on Saturday, November 21. The cub was transferred to the Wildlife Center of Virginia that same day.

Veterinary intern Dr. Sarah performed an intake examination when the cub arrived. Based on his dentition, the cub appears to be a young-of-the-year bear, likely born in the late winter of 2020.  The bear was very thin and dehydrated, weighing only 5.96 kg. A skin scraping confirmed that the bear had sarcoptic mange mites. Mild abrasions on the bear’s feet were also found, likely related to his overall poor condition. 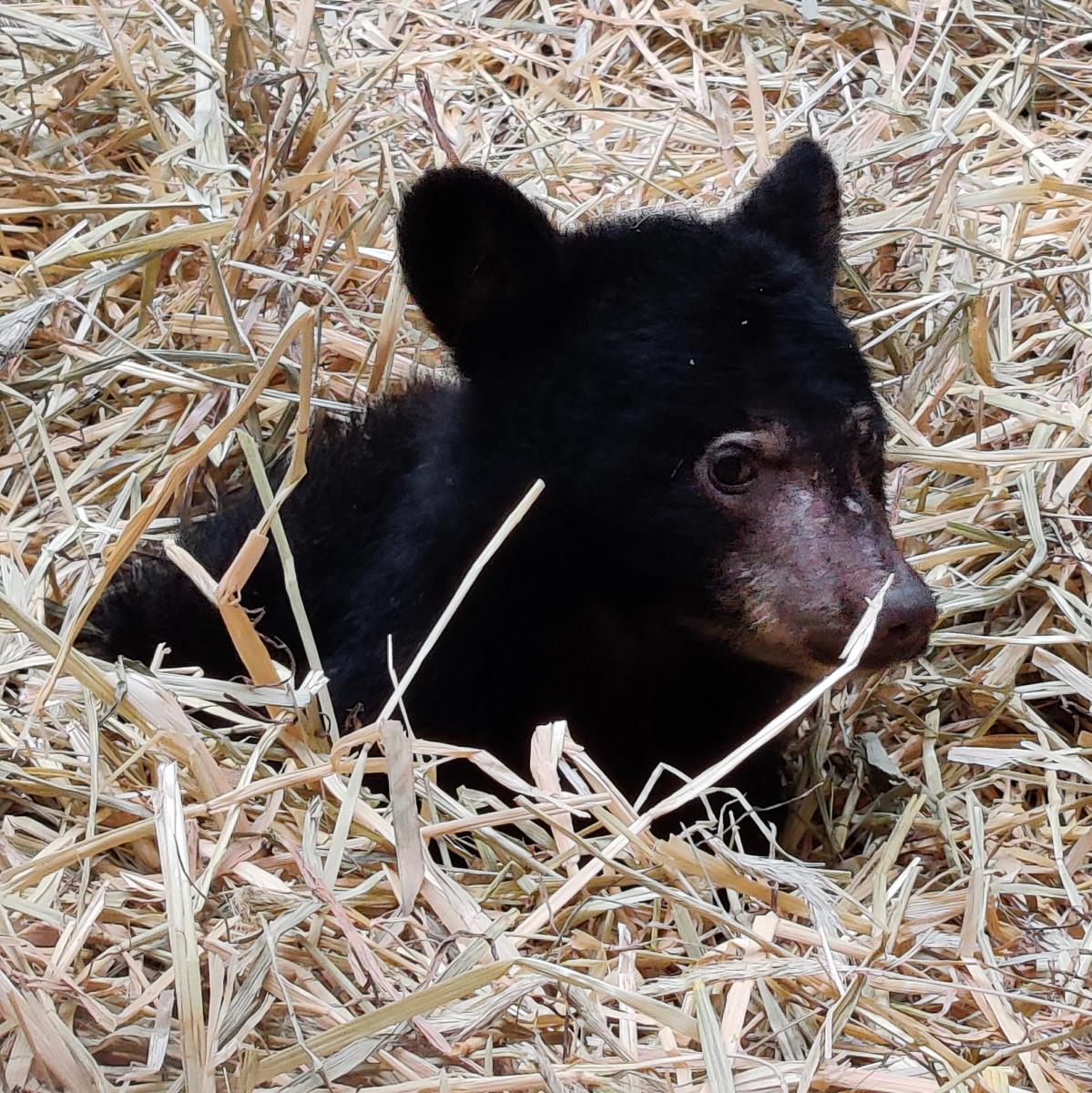 A set of radiographs were taken, which did not show any signs of internal trauma or abnormalities. Following the intake examination, the bear was kept in the Center’s indoor holding area overnight. On November 22, the veterinary staff moved the cub outside to Bear Pen 1.

During the coming week, Center staff will closely observe the bear and will offer an oral medication for the mange when the bear is eating consistently. It's likely that this cub will join Black Bear cub #20-3590 when both are free from mange and large though to be moved to the Black Bear Complex.

Your donation will help provide veterinary medical care to this debilitated Black Bear cub ... and more than 3,600 patients that the Center has admitted so far this year!

Wildlife rehabilitator Kelsey has been in touch with biologists with the Department of Wildlife Resources to start planning ahead for next month's Black Bear releases!

Later this month, DWR will drop off large culvert traps at the Center so that these can be in place in preparation for next month's release plan. At this point, the first round of bear releases will take place on April 13 and 14, with additional releases taking place during the week of April 19. The 21 bears in the Bear Complex will be split into multiple smaller groups, for releases in various areas of Virginia.

Black Bear #20-3609 weighed in at 25 kg and was a very healthy body condition -- a stark contrast from her admission weight of 5.96 kg. Dr. Karra carefully checked the yearling's eye and was pleased to find that the issue has completely resolved -- both eyes are functional and within normal limits. An additional skin scrape was negative for mange mites, and the veterinary team declared that the bear was finally ready to move to the Black Bear Complex! The yearling was placed into the transition area of yard #1, where she successfully recovered. 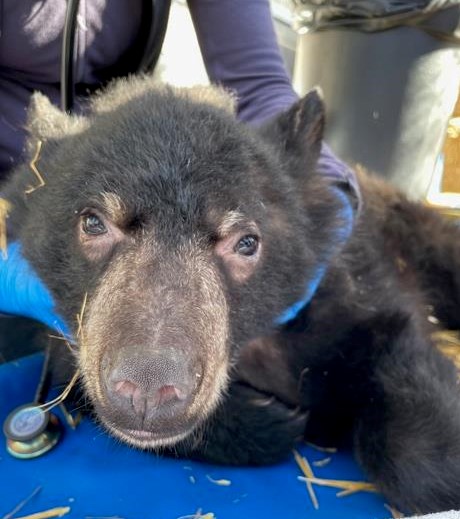 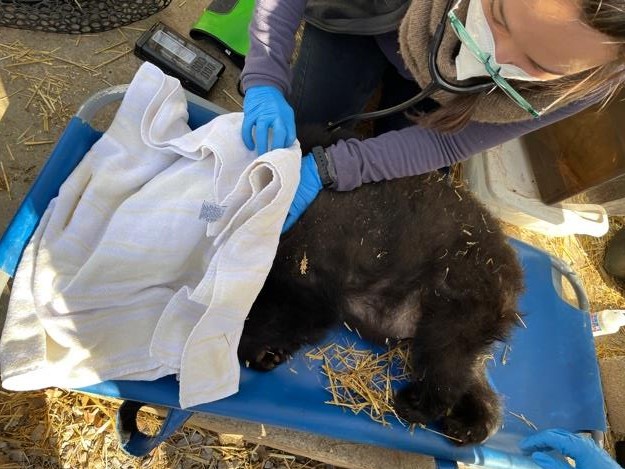 The bear will remain in this smaller area for the immediate future so the team can continue to observe the bear in a larger space and continue to monitor her eye.

Black Bear #20-3590 weighed in at 25 kg and was a very healthy body condition. The veterinary team placed a green tag in each of the bear's ears. The yearling still had a small area of crusting and alopecia on her abdomen, which is likely consistent with a mild abrasion or ringworm. A skin scrape was negative for mange mites, and the veterinary team determined that the bear was ready to move to the Black Bear Complex! The yearling was placed directly into yard #1, where she'll have several days to acclimate to the new space by herself.

After a few days of observation, both bears will have access to the yard together.

The other 19 Black Bear yearlings will continue to have access to Yards 2 and 3.

Black Bear #20-3609 has been continuing to slowly heal in the Center's Bear Pens. The bear has been on an extended course of antibiotics and anti-inflammatories since the veterinary team noted improvement with the bear's eye; the course of medication will end on January 27. The team will assess the bear at that point and determine if he is ready to move to the Bear Complex, or if further treatment is needed.

Dr. Karra noted that after several days of treatment with antibiotics and anti-inflammatories, the bear's bulging eye looked much better; the eye was still slightly protruding, though was significantly less extended than it was last week. Dr. Patrick, a veterinarian at the clinic, was able to take dental radiographs of the bear to rule out a tooth root abscess. He also performed an ultrasound of the bear's eye and did not see any significant evidence of a mass or foreign material behind the eye. In general, this area is difficult to ultrasound, so while it does not completely rule out a mass, the veterinary team is less concerned overall.

While the cause of the bear's eye issue is not known, the team is hopeful that the bear simply had a significant infection or inflammatory issue, which will continue to respond to treatment. The bear will continue to live in a Zinger crate for a few more days; if all continues to heal well, the bear will move back to the Bear Pens for further observation and treatment. 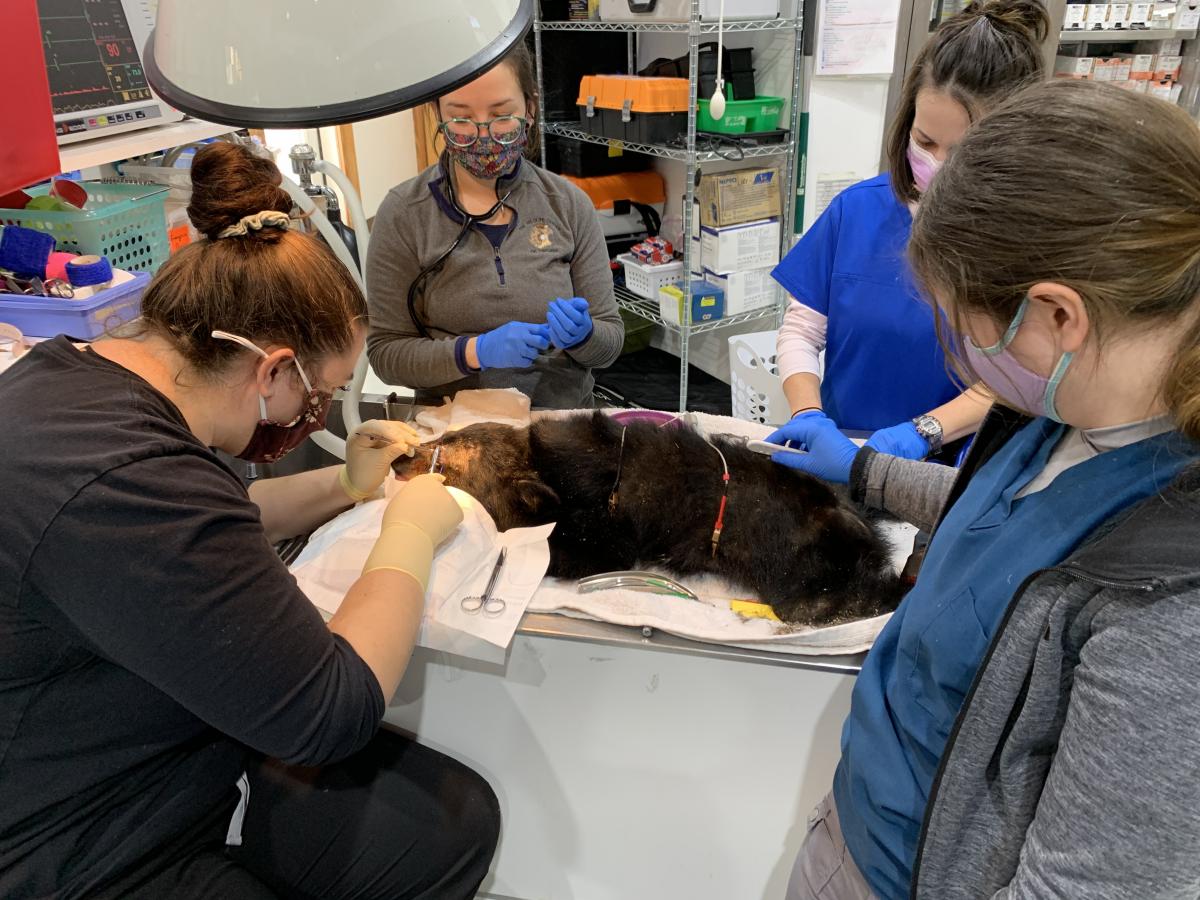 On December 27, the rehabilitation team noted that Black Bear #20-3609 had a swollen left eye. The following day, the veterinary team darted and anesthetized the cub for an examination.

The team found that the bear's eye was protruding from her skull; though a cause could not readily be determined. Dr. Karra suspects that something behind the eye is pushing the eye forward and explains, "The most likely cause is a retrobulbar abscess (a pocket of pus behind the eye); however, something like a tumor is also possible. The treatment for a retrobulbar abscess is making a connection to allow the pocket to drain into the bear's mouth. We attempted this, though it was not successful, likely due to the anatomy of a black bear ... or, it may not be an abscess, and instead could be a mass."

Dr. Karra and team anesthetized the bear again on December 29 to see if they could find anything behind the bear's eye but were unable to discern anything. Since antibiotics and anti-inflammatories may be able to treat a potential infection behind the eye, the bear started a course of medications, and the veterinary team will monitor the bear for the next few days. The veterinarians performed a temporary tarsorrhaphy [sutured the eye closed] to protect the globe of the affected eye for the next few days.

If the bear's condition does not improve by the weekend, the Center will see if a local veterinary clinic can take dental radiographs of the bear's skull. For the next few days, the bear will be housed in a Zinger crate inside the Center for closer observation.

At this point, the bear's prognosis is poor.

On December 10, the veterinary team sedated and evaluated Black Bear #20-3609. Dr. Sarah reported that the bear was still thin and had crusty skin, though the bear's paw pads were much improved since admission. A skin scraping was clean, indicating no mange mites still present on the bear. Blood work was also much improved since the bear's admission. 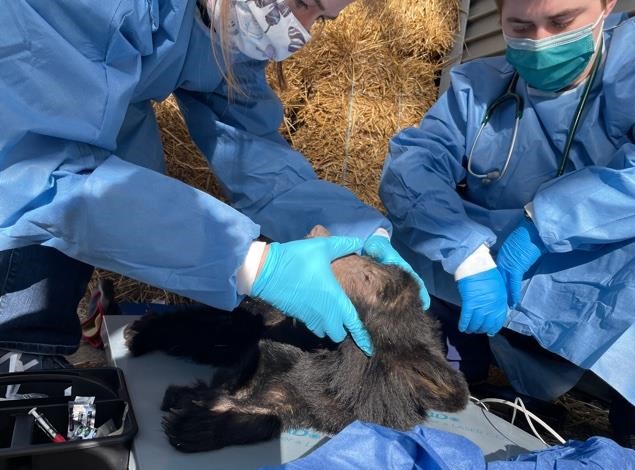 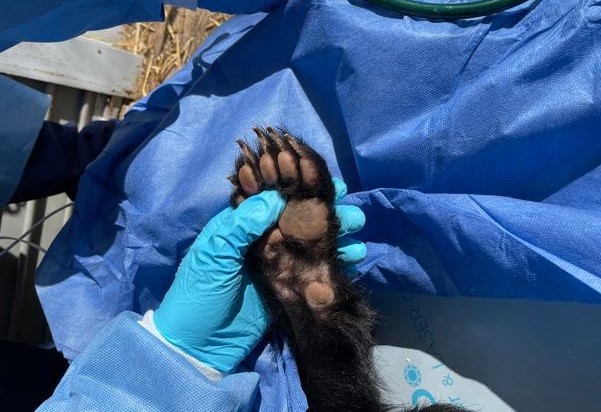 Another skin scraping will be performed in two weeks; as long as there are no signs of mange mites, the bear will likely be moved to the Center's Black Bear Complex, along with Black Bear #20-3590. 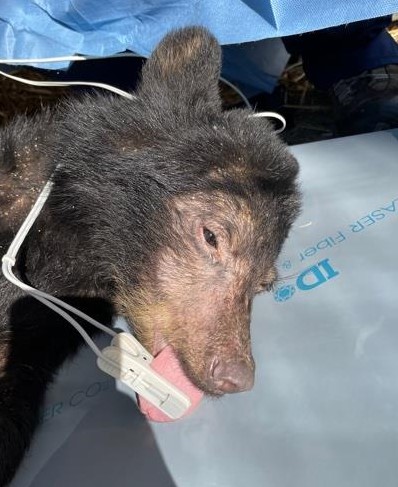 Black Bear cubs #20-3590 and #20-3609 have been quietly recovering in two of the Center's Bear Pens. The bears are eating well, and typically receive about six to eight pounds of food a day. During the week of December 7, the veterinary team will plan to sedate both cubs (on two separate dates) to perform follow-up skin scrapings. If both bears test negative for mange mites, they will be moved into adjoining bear pens so that they can have a "nose to nose" introduction. At the end of December, after an additional "clean" skin-scraping, the bears will move to the Black Bear Complex, and will both live in yard #1.