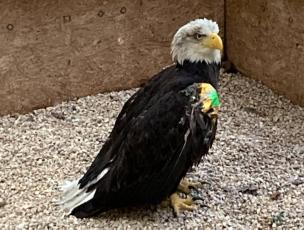 On August 22, a private citizen in Temperanceville, Virginia found an adult Bald Eagle stuck in a wastewater treatment pond. The eagle was covered in grease and unable to fly. The citizen contacted permitted wildlife rehabilitator Jodie Sokel, who drove to the treatment pond and captured the eagle. The eagle was transferred to the Wildlife Center the next morning. 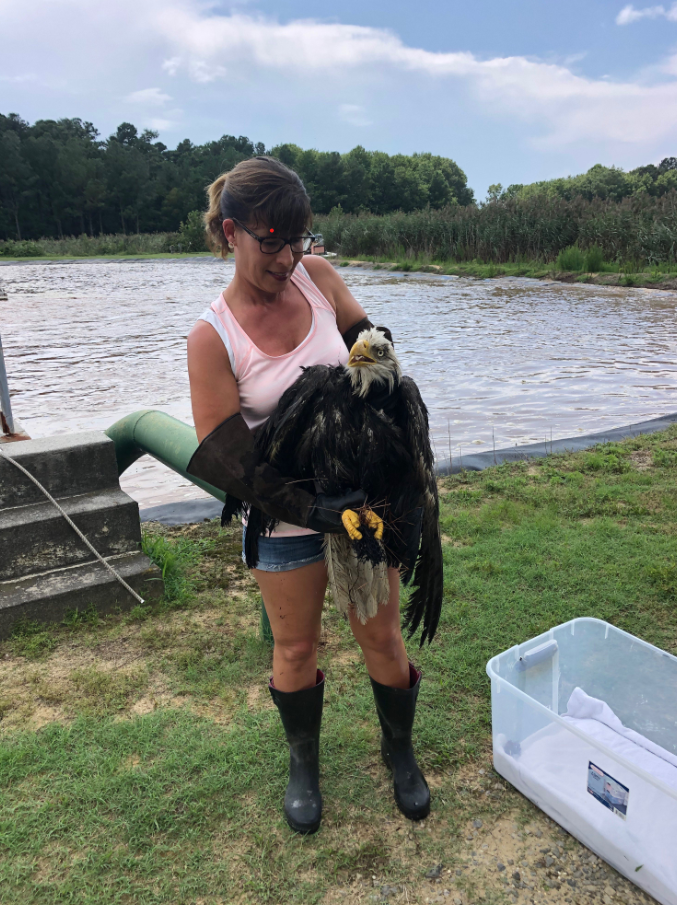 On admission the eagle, suspected to be female, was alert and responsive. Dr. Jenn, one of the Center's veterinary interns, examined her and found that she was mildly dehydrated and had grease residue on her feathers and abrasions on the carpi (wrists) and phalanges (fingers) of both wings. The exam did not reveal any fractures or other wounds. After her exam, Dr. Jenn ran an in-house lead test that came back positive for 0.164 ppm lead—a low level, but potentially fatal if left untreated.

Dr. Jenn started the eagle on a course of chelation therapy to remove the lead from her system, administered fluids to correct her dehydration, and applied bandages and protective carpal bumpers to her wings. She decided not to anesthetize the eagle to remove the grease from her feathers since it was such a small amount. The veterinary team kept the eagle in the Center’s indoor holding area to rest in between treatments and for close monitoring.

On August 28, a repeat lead test revealed that chelation therapy had successfully removed the lead from the eagle’s system, and the abrasions on her wings appeared to be healing well.

On September 3, the rehabilitation team moved the eagle to the Center’s A3 flight pen to assess her ability to fly. They placed a tub of water in her enclosure so that she could remove any remaining grease from her feathers. During the month of September, they found that the eagle would mostly remain on the ground. When approached, she would run away and flap her wings but could not gain any lift. The rehabilitation team also discovered a large number of broken feathers in her enclosure. Upon closer inspection of the feathers, they found signs of chewing, and suspect that the eagle was damaging her feathers.

On October 4, the veterinary team took radiographs of the eagle to see if there was an internal injury that could be causing her flight issues but did not discover any injuries or abnormalities. They started the eagle on a course of pain medication, and later added medication to reduce her stress in captivity, which they hope will stop her from chewing her feathers.

For now, the rehabilitation team will keep the eagle in the Center’s A3 flight pen where they will continue to assess her ability to fly. Her prognosis remains guarded.

Your donation will help provide veterinary medical care to this injured Bald Eagle ... and more than 3,500 wild patients in need this year. Thank you!

During the past three weeks, Center staff have been closely observing Bald Eagle #21-3026. While the imping procedure completed on October 26 was successful, both the veterinary and rehabilitation staff have confirmed that all three donor feathers have since fallen out or have been chewed off. Fortunately, the staff have observed new feather growth in the damaged areas during the past few weeks.

Many Bald Eagles in Virginia experience seasonal molting – during the spring and summer months, old feathers are sequentially dropped in small numbers (allowing the bird to retain the ability to fly) and replaced with new feathers over time. Fortunately, new feather growth is not limited to the spring and summer seasons. Veterinary staff expect the eagle’s new feathers to become fully developed during the next month. At that time, Center staff will be able to more accurately develop a plan of care. Recent daily physical conditioning routines have not shown improvement in the eagle's ability to fly properly. This patient’s prognosis remains guarded.

For now, daily exercise has been discontinued while the eagle’s feathers grow and develop. Critter Cams watcher may have the chance to see this eagle live on Critter Cam 3!

Throughout October, Bald Eagle #21-3026 has been housed in flight pen A3 where Center staff have closely monitored the bird during exercise sessions and have not seen her flying. On October 26, the veterinary team anesthetized the eagle to take radiographs and “imp” her wing feathers. 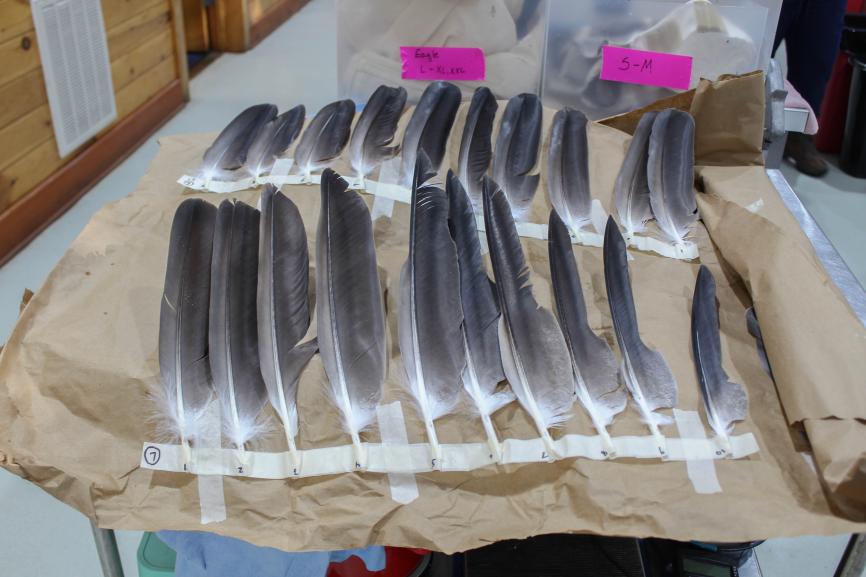 Imping is a process by which healthy feathers—collected from deceased patients of the same species—are attached to the base of damaged feathers, resulting in a feather transplant.  Feathers can take months to grow back, but imping allows birds with feather damage to regain flight more quickly. The donor feathers are attached to the bird's feather shafts using an adhesive, and once the bird molts, the imped feathers will fall out as new feathers grow in to take their place. The radiographs did not reveal any abnormalities, and the veterinary team successfully attached three donor feathers to the damaged feathers on the eagle's left wing. After the procedure, the veterinary team placed the eagle in the Center’s A2 flight pen. Since imping, the eagle has still not been able to get off the ground for more than a couple of seconds. The veterinary team will continue to closely monitor her ability to fly.