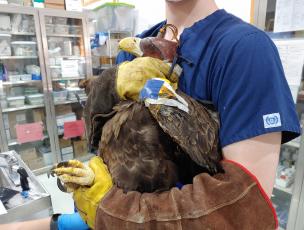 Bald Eagle #21-1030 was admitted to the Wildlife Center on May 7 after she was found at a landfill in King and Queen County, Virginia. Upon admission, the veterinarians noted that this eagle was quiet, but alert and responsive. During the physical exam, former veterinary intern Dr. Sarah found scarring and discoloration in the eagle’s left eye, but the patient appeared to still have functioning eyesight. This eagle also had a large wound on the left elbow with crusted dirt and discharge which, after being removed, revealed necrotic muscle tissue. The necrotic tissue was able to be removed, the wound was further cleaned and bandaged, and a body wrap was applied to immobilize the wing and allow the tissue to heal.

Radiographs revealed no fractures in any of the extremities but did reveal metallic material in the bird’s crop and gizzard. After an in-house lead test revealed a lead level of 0.221 parts per million, the decision was made to lavage this material out of the bird’s body.

The patient was given various pain, anti-inflammatory and antibiotic medications, as well as a tail guard and a strict monitoring schedule.

On May 12, after careful consideration, this bird was anesthetized and Dr. Karra performed surgery to clean and close the elbow wound with sutures. On the 14th, after two days of post-operation healing, the decision was made to remove the body wrap and allow the eagle to move her wing more. The following day Dr. Cameron noted that the “incision site looks great.” Swelling and discharge have remained minimal as time has passed.

On May 24 the eagle was noted to be bright, alert, responsive, and feisty, all of which are positive signs that this eagle is regaining her strength and energy. Finally, on May 27 this bird was moved outside to A3, one of the Center’s largest flight pens, to give her an opportunity to stretch her healing wing in a larger outdoor space, and to spend time with other rehabilitating eagle patients. You can watch these eagles on one of our Critter Cams here. 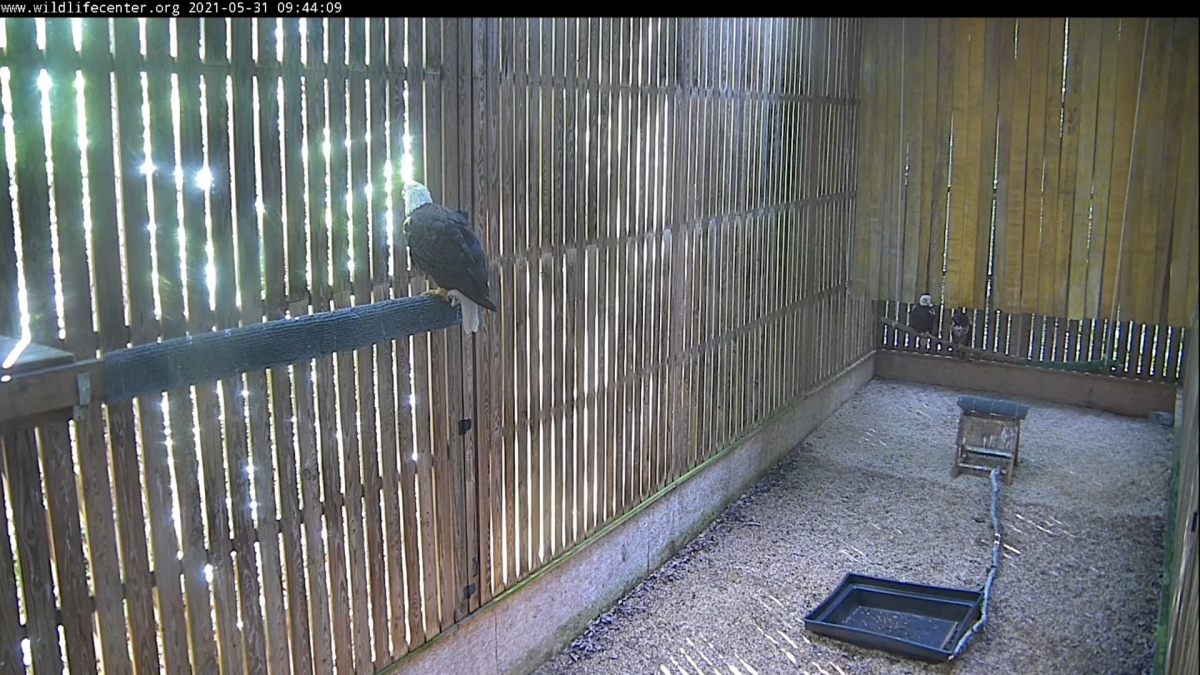 Your special donation will provide care to this Bald Eagle ... and more than 3,700 other wild animals in need. Thank you!

Following seven months of veterinary and rehabilitative care, Bald Eagle #21-1030 was humanely euthanized on December 16. While the eagle's carpal wounds had healed very well, the bird had recently developed a left-wing droop. A diagnostic evaluation revealed that the left elbow had a reduced range of motion, likely caused by an infection of the joint related to the original wound.  The eagle had also developed a new abscess over the right elbow. The prognosis for septic arthritis from this new wound was grave and carried with it a high likelihood of osteoarthritis in the future.  The veterinary team determined that these new findings would prevent the eagle from regaining normal flight function. In light of these developments, along with consideration for the bird's associated pain and quality of life, the decision was made to humanely euthanize the eagle.

During the past month, Bald Eagle #21-1030’s carpal wounds have shown significant improvement. On October 27, the veterinary team moved the eagle to the Center’s A2 flight pen, a larger flight pen compared to A3 that will ideally prevent the bird from damaging its carpal injuries further during daily exercise routines.

The veterinary staff have closely monitored the bird in her new enclosure, but have not seen the eagle flying with significant stamina or proper form. When approached, the eagle does not attempt to fly -- instead, the bird regularly attempts to avoid the rehabilitation staff by walking or running on the ground.

On November 11 during a regular bandage change inside the Center's treatment room, the veterinary staff took a series of radiographs of the eagle’s wings.  Unfortunately, no significant changes were noted compared to previous radiographs taken during the month of June. For now, the eagle will remain in  outdoor flight pen A3 where it will receive continued supportive care and physical rehabilitation. The prognosis for this eagle remains guarded.

During the past two months, the veterinary team continued to treat Bald Eagle #21-1030’s carpal wounds. On September 10, they moved the eagle to the Center’s A3 flight pen to give her more space, which will help reduce her stress in captivity and lessen her chances of bumping her wings and aggravating the wounds. After months of bandage changes and daily treatment with topical ointments and antiseptics, the eagle’s carpal wounds appear much improved, though the prognosis is still guarded. The veterinary team will continue to provide treatment for these wounds and closely monitor for signs of infection or necrosis.

The veterinary team continues to manage Bald Eagle #21-1030's carpal injuries. The treatment of this eagle has been challenging; while the bird's right carpus is showing solid signs of improvement and healing, the left carpus has needed several surgical procedures to manage the large wound in this high-tension area of the bird's wing. The team will assess the prognosis for this bird in the coming weeks.

The veterinary team has continued to manage Bald Eagle #21-1030's significant carpal injuries this month; these wounds have proven to be very challenging, given the high-tension area and movement of the bird's "wrists". On July 21, the veterinary staff anesthetized the eagle to carefully debride the wounds and resuture them closed. Treatment will continue, though the bird's prognosis is guarded.

During the past week, Bald Bald Eagle #21-1030 has been closely monitored during daily treatments. The veterinary staff clean and flush the eagle's wounds with iodine, apply new bandages, and administer pain and anti-inflammatory medications. On June 29, it was noted that necrotic tissue was present near a wound on the bird's right wrist -- an injury that was present upon admission to the Center on May 7 -- and Dr. Karra performed a surgical debridement of the area on June 30. After surgery, a wing wrap was applied to temporarily immobilize the area during recovery.

For now, the eagle will be held in a small outdoor enclosure while the veterinary staff continue to perform daily treatments. Prognosis for this patient remains guarded.

At the beginning of June, Bald Eagle #21-1030 started making some short, low flights in the A3 flight enclosure, stretching her wings and starting to regain a little stamina. Unfortunately, a routine foot and feather check on June 7 revealed that the eagle once again had an abscess on her injured left elbow. The veterinary team brought the bird into the Center's treatment room to carefully drain the abscess and flush and treat the injured area. The bird was placed back in a crate in the Center's holding room.

On June 9, the veterinary team took the eagle to surgery to more carefully drain the affected area; they also placed an antibiotic bead in the bird's elbow to treat the infected area in a more targeted way.

During the past two weeks, the staff treated the injured eagle every day; the wound is carefully checked, flushed clean, and bandaged as needed. The eagle is eating well, though the injury is a challenging one to treat. At this point, the eagle's prognosis is guarded. 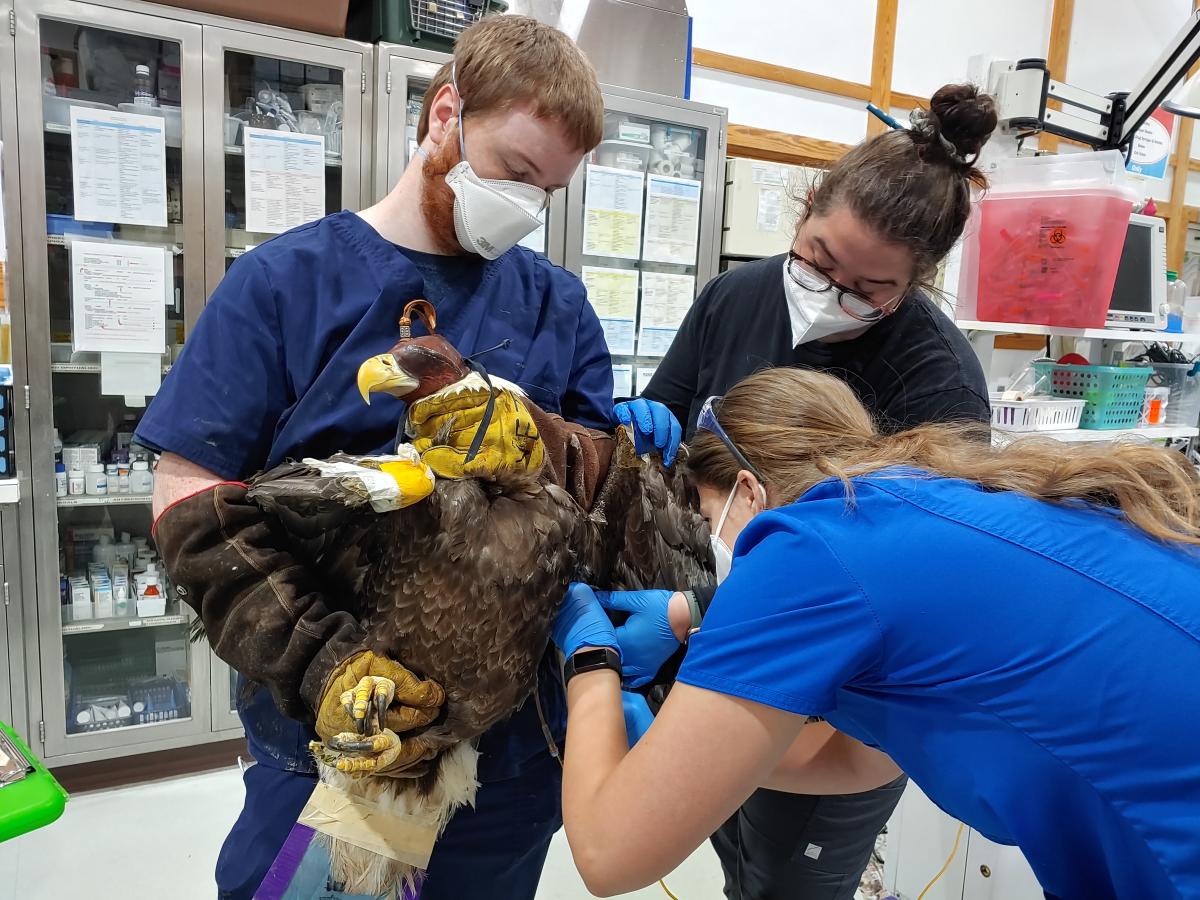