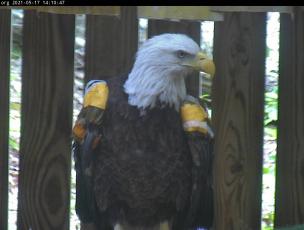 On April 25, a mature Bald Eagle was found lying on the ground, unable to fly, near Sandy Bottom Nature Park in Hampton, Virginia. A park ranger was able to capture the bird and took it to a local permitted wildlife rehabilitator. The eagle was transported to the Center the following day.

The veterinary team carefully cleaned the eagle's leg wound and decided to perform a gastric lavage on the Bald Eagle to remove the pieces of metal from the digestive tract. The lavage procedure essentially washes the debris out of the affected area; the veterinarians wanted to remove any possible lead fragments to prevent more severe lead toxicity; they were also particularly concerned about the metal wire puncturing the eagle's digestive tract. The team was able to successfully remove a number of metal fragments, though the wire remained in the eagle. The metal pellet in the eagle's body wall was left untouched; based on the shape of the pellet, it's unlikely that the pellet was made of lead, and the potential for lead toxicity is greatest with metal fragments in the digestive system or lodged directly in the bone.

The eagle started on a course of antibiotics and chelation therapy, and was placed in a crate in the Center's holding room. In the weeks following admission, the staff carefully checked the eagle's feces every day for signs of the metal wire; they also carefully monitored for any dramatic attitude changes that may indicate that the metal wire was causing any internal damage.

On May 8, the staff debrided the wound on the eagle's leg; they were able to trim away the dead tissue and freshened the edges to more cleanly suture the wound shut. The eagle was moved to a small outdoor enclosure [C-pen] the following day.

The Bald Eagle has been much more bright and alert following her lead treatment; unfortunately, despite protective carpal [wrist] bumpers, the eagle has managed to bump into the walls of the small outdoor enclosure, creating carpal wounds that the veterinarians have had to manage, in addition to treating the bird's leg wound. On May 17, the eagle was moved to flight pen A3, to allow the bird to have more space.

The veterinary team was never able to confirm that the metal wire in the bird's GI system had passed, but at this point, Dr. Karra does not anticipate any additional issues. The next time the bird is caught to manage her wounds, the team will likely take a quick set of radiographs just to check and see if the wire is still there.

Watch this Bald Eagle -- and other eagles! -- on the Center's Critter Cams!

Your donation will help provide veterinary medical care to this lead-poisoned eagle ... and more than 3,500 wild animals that the Center will treat this year.

Sadly, Bald Eagle #21-0677 was humanely euthanized on September 17. Despite the intensive care the veterinary and rehabilitation staff provided during the past five months, involving numerous techniques and medications, the eagle's carpal wounds repeatedly opened and showed signs of infection. Radiographs taken on September 17 indicated that the skeletal structures on the bird's left wing were becoming very affected, likely suffering from the associated wound infection. This condition combined with a failure to respond to various therapies resulted in a grave prognosis for full recovery, and humane euthanasia was selected.

Bald Eagle #21-0677 remains in the A3 tower, where the veterinary team can more easily catch and treat the eagle's carpal injuries. While there have been intermittent improvements, the wounds are still far from healed. Significant carpal injuries can be challenging to treat; unfortunately, the wounds do require regular hands-on care to ensure that they remain clean and bandaged, but the regular catching of the bird for the treatment often creates an opportunity for the bird to re-open partially healing wounds. The veterinary team is trying to carefully manage being hands-off as possible while providing regular care and medication. The team will assess the prognosis for this bird in the coming weeks.

During the past two and a half weeks, the veterinary staff have continued to clean an reapply bandages to Bald Eagle #21-0677's carpal wounds during daily treatments. On July 18, both the left and right carpi were surgically cleaned and debrided. Sutures were applied to close the wound on the bird's right wing, but do to the large amount of necrotic tissue removed from the left carpus, the veterinary staff were unable to close the wound. On July 24, an additional surgical debridement was performed on both carpi. During the procedure, hydrogel bandages were applied and sutured into place over both wounds -- specialized bandages that are designed to maintain moisture and promote healing -- that will be removed and replaced every two or three days. For now, the eagle will remain under observation outdoors in the A3 tower.

The veterinary team is still closely managing Bald Eagle #21-0677's carpal wounds. On July 10, the veterinary staff debrided the wounds again, carefully rebandaged them, and decided to move the eagle back to the A3 tower. This location allows the staff to still closely monitor and treat the bird, but allows the eagle to be farther away from people, and to see and interact with the other eagles in the A3 enclosure.

Each day, the staff carefully check and clean the bird's wounds before reapplying bandages and administering medications. At this point, the bird's right carpal wound appears to be healing well; the sutures are intact and there is minimal discharge at the incision site. The bird's left carpal wound has been more challenging to manage; the wound is unable to entirely close. The staff will continue to carefully treat the eagle's wounds.

Throughout the end of June, Bald Eagle #21-0677 remained in the A3 flight enclosure. The veterinary team regularly checked the eagle's carpal wounds and, on July 2, found that the wounds had worsened, despite the eagle's lack of exercise. The team decided to move the eagle back to "metals", a small outdoor building with a variety of crates. This area allowed the eagle to remain outside and away from humans, though contained the bird in a smaller space so the veterinary staff could examine and treat the eagle's wounds every day.

The bird's wounds were carefully cleaned, debrided, and sutured closed on July 2. On July 5, it appeared as though the wounds were healing well, though slowly. The veterinary staff will continue daily treatments, bandage changes, and pain medications for the eagle.

Bald Eagle #21-0677 has been steadily recovering in outdoor flight pen A3 during the past two and a half weeks. Dr. Karra -- the Center's Director of Veterinary Services -- reported that while the eagle's leg wound has made a complete recovery, the carpal injuries that were previously observed have been slower to heal. To prevent any possible long-term damage related to infection, the veterinary staff surgically debrided the area on June 21.

For now, the rehabilitation staff will discontinue the bird's daily exercise regimen and increase the frequency of its carpal bandage changes in an effort to expedite the healing process. Center staff will continue to assess the possibility of this eagle's release during the coming weeks.

During the past two weeks, the veterinary team have been carefully managing Bald Eagle #21-0677's healing carpal wounds. The eagle has plenty of space to navigate in the A3 enclosure and has readily demonstrated that she can get to the high perches in the enclosure. The rehabilitation staff began the bird on a daily exercise regimen; during these sessions, the eagle mostly flies low to the ground.