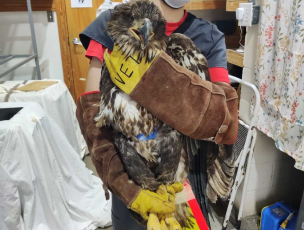 On the night of March 6, an Augusta County animal control officer found a young Bald Eagle injured on a road in Middle River, VA. He was able to capture the eagle and called the Wildlife Center’s after-hours phone line for assistance. Dr. Sarah, one of the Center’s veterinary interns, met the animal control officer at the Wildlife Center later that night to admit the eagle.

On admission, the eagle was standing in its crate and was quiet but alert and responsive. Dr. Sarah examined the eagle and found that it was slightly dehydrated and thin, and had two small puncture wounds on its left wing that were bleeding. No other obvious external injuries were found. Radiographs revealed that the clavicle in its right wing was fractured, and that it had a small pocket of air in its abdominal area. After examining the eagle, Dr. Sarah drew a blood sample that came back positive for 0.016ppm lead -- a subclinical level that overtime can cause coordination issues and difficulty flying. 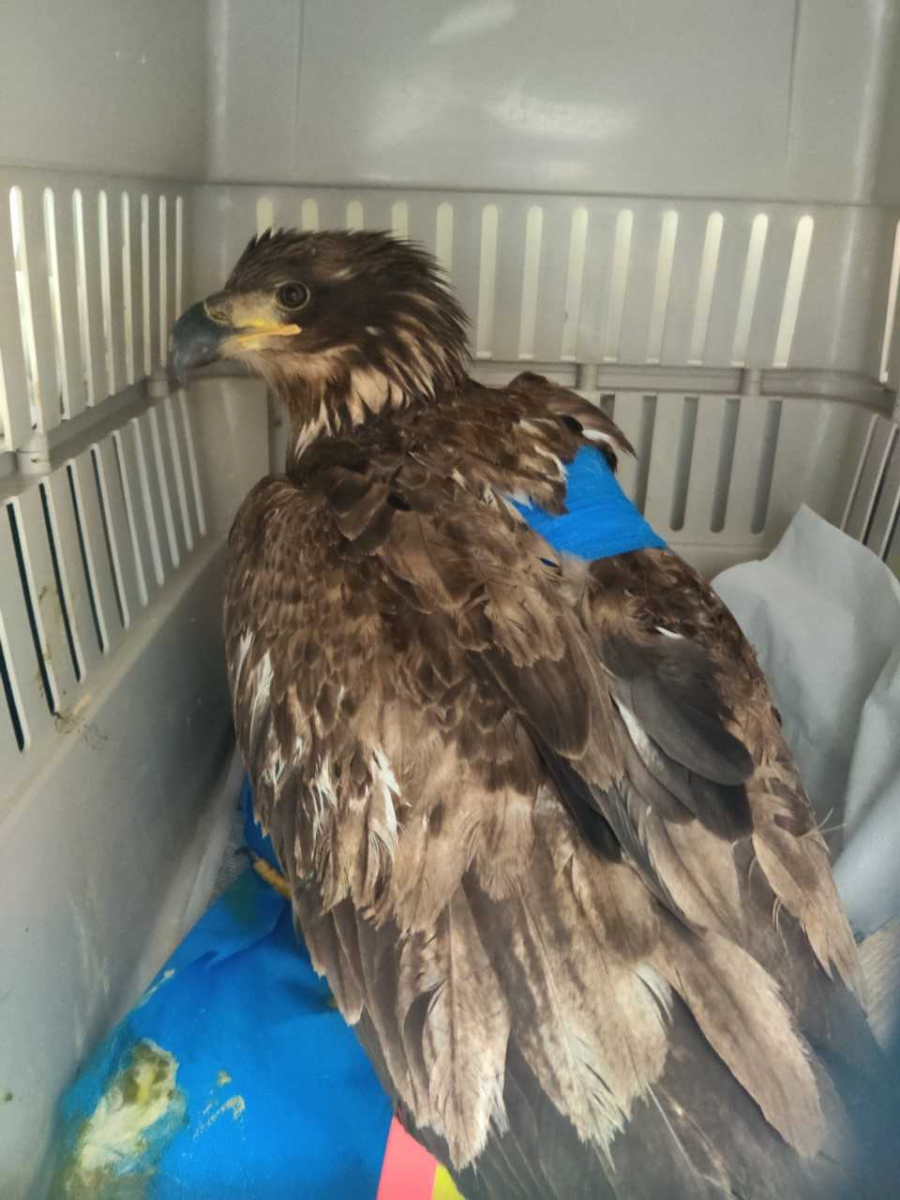 Dr. Sarah suspects that the eagle’s lead toxicity has been an ongoing issue, and predisposed it to being hit by a car, the likely cause of its injuries. She immediately administered fluids to correct its dehydration and anti-inflammatory medication to help its injuries heal, and started the eagle on chelation therapy to remove the lead from its system. After receiving treatment, the eagle was placed in one of the Center’s indoor holding areas to rest for the night.

The following day the Center’s veterinary staff discovered that the eagle also had a fracture in its right coracoid. In addition to its other treatments, the veterinary staff started the eagle on a course of pain medication and applied a body wrap to stabilize its fractures in order for them to heal correctly. They also applied an anti-septic to the puncture wounds on its left wing. 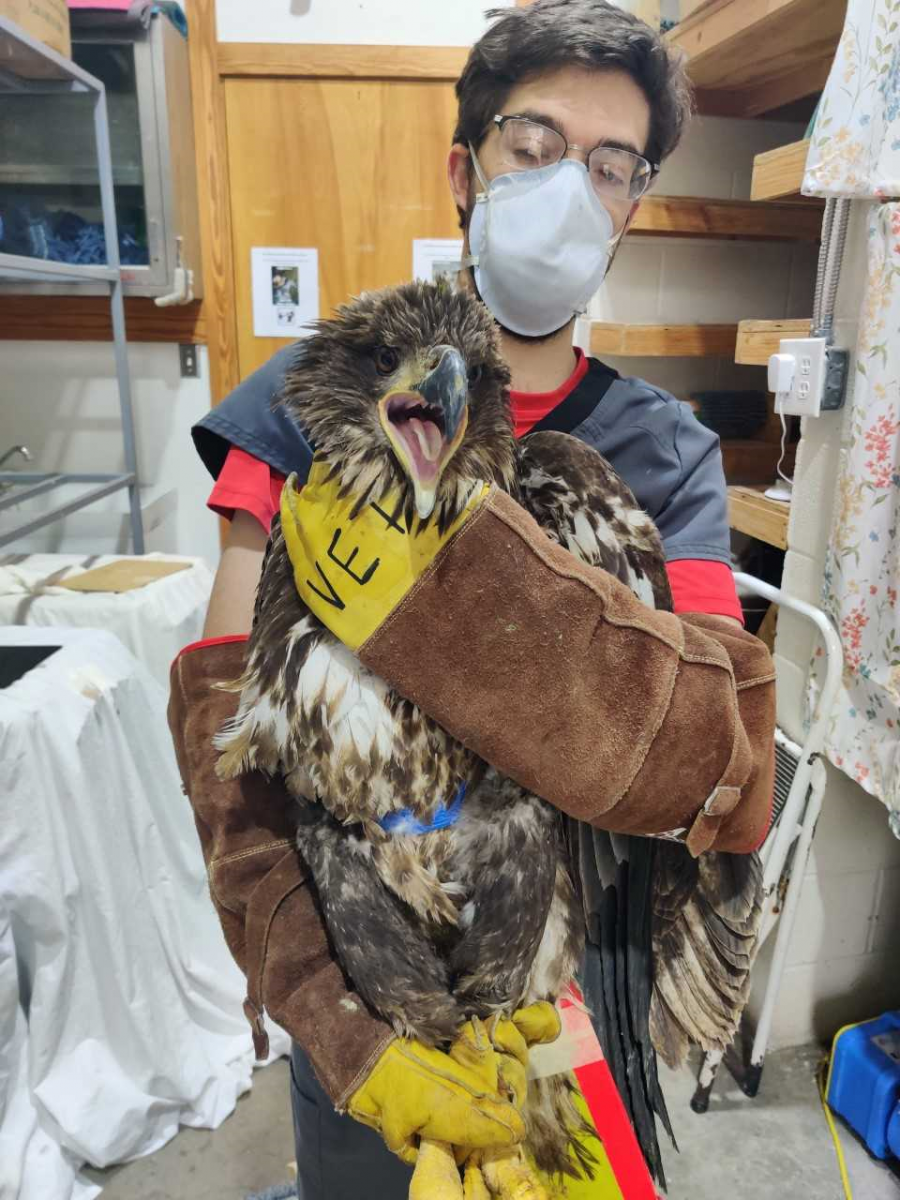 The eagle is currently being housed inside the Center where it can be easily monitored by the veterinary staff. They report that it has been bright and even feisty on some days, though its prognosis for recovery is guarded due to multiple injuries.

During the past three weeks, veterinary staff have kept Bald Eagle #21-0214 in the Center’s indoor holding area for daily treatment and close observation. An in-house lead test revealed that chelation therapy has successfully removed the lead from the eagle’s system, and radiographs have shown slight improvement of the fracture in the eagle’s right wing. However, the puncture wounds on the eagle’s left wing did not respond to its initial course of anti-inflammatories, and developed into a desiccated and severely necrotic wound along the patagium of its wing, a part of the wing that is essential for flight.

Veterinary staff have been cleaning the wound daily with an antiseptic and applying a medical gel to rehydrate the necrotic tissue. By keeping the wound moist, the dead tissue should become easier to remove, which will allow the veterinary team to surgically debride the wound and preserve some of the healthy tissue. To facilitate this process, they have been applying a specialized type of bandage to the wound that helps maintain a moist environment. The veterinary team also started the eagle on a course of antibiotics to help fight off its infection, and anti-fungal medication to prevent aspergillosis, a type of fungal infection that is common in Bald Eagles in captivity.

The eagle is currently remaining indoors where it can rest in between treatment and be closely monitored by veterinary staff. Once the wound on its wing is hydrated enough, they plan to perform surgery to remove the dead tissue and close up the wound. They also plan to take additional radiographs at a later date to assess if its fractures continue to improve.