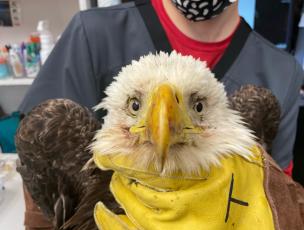 On the evening of December 15, a private citizen in Chesterfield County observed two Bald Eagles fighting on the ground in her pasture, an interaction not uncommon in this species.  She was able to safely capture the injured eagle after the other had left. Chesterfield County Animal Services was contacted, and an officer arrived to transport the patient to a veterinarian.

Upon admission, the eagle was bright, alert, and responsive during an intake exam with Dr. Karra. However, the bird showed mild signs of paresis due to its inability to stand or use its legs, and hemorrhaging in the mouth and throat was observed. Following a physical exam, a blood sample was taken for emergency testing, revealing a lead toxicity level of 0.2 ppm -- technically categorized as "subclinical" (not outwardly showing obvious signs or symptoms), but still requiring treatment. Since no level of lead is safe, the veterinary team started a course of oral chelation therapy. To learn more about lead toxicity in raptors, a serious yet preventable issue, click here.

The radiographs taken at Wellesley Animal Hospital showed internal trauma, which could have been sustained from impacting the ground while fighting with the other eagle.

After spending the night indoors in an oxygen chamber, the bird was found to be bright, alert, and responsive the following morning, but laying on its sternum rather than standing. The patient is currently being given pain and anti-inflammatory medications and is also receiving treatment for lead toxicity.

The prognosis for this eagle moving forward is guarded to grave, due to the difficult nature of treating internal trauma combined with the effects of lead toxicosis.

Your donation will help provide veterinary medical care to this Bald Eagle ... and more than 3,600 patients that the Center has admitted so far this year!

Physical therapy continues as Bald Eagle #20-3699 recovers from leg paresis. An important part of this physical therapy is ensuring that the unused muscles in this eagle’s legs continue to be stretched and flexed. This helps keep those muscles functional, even while they are not functioning correctly due to this bird’s injury.

Dr. Karra describes these therapy exercises as “bird squats,” during which the eagle has its feet placed on a perch, before being moved into and out of a squatting position. Dr. Cam noted that this bird is regaining strength in both legs, but that at the moment, its right leg seems stronger. 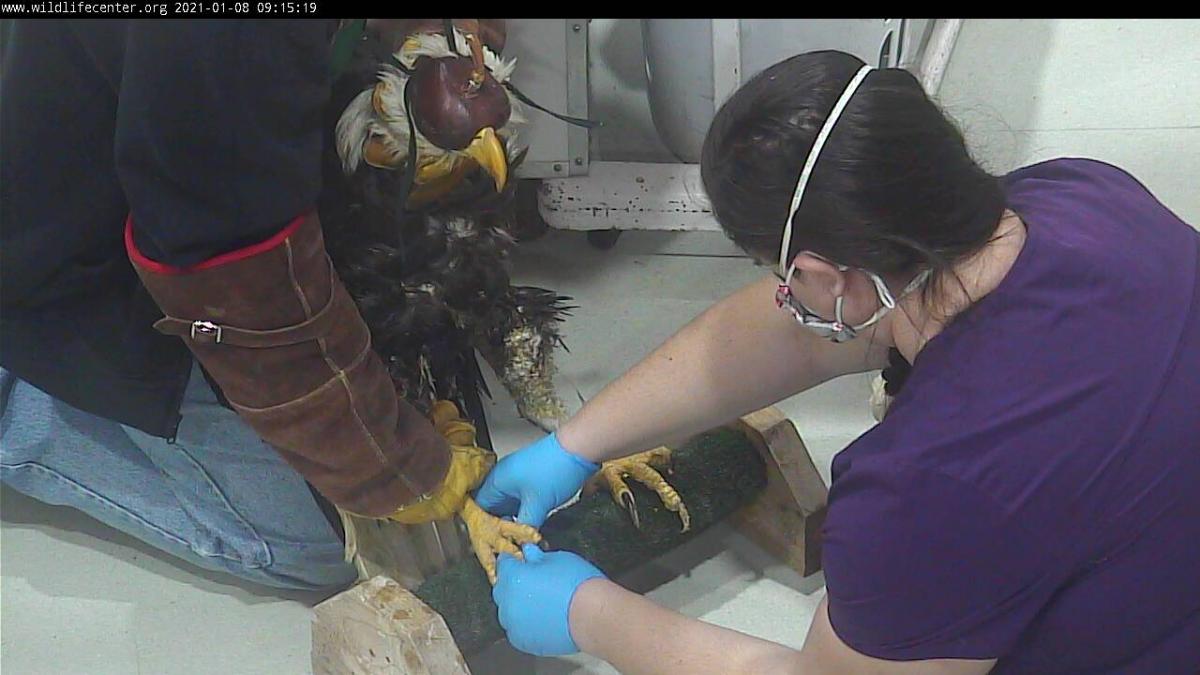 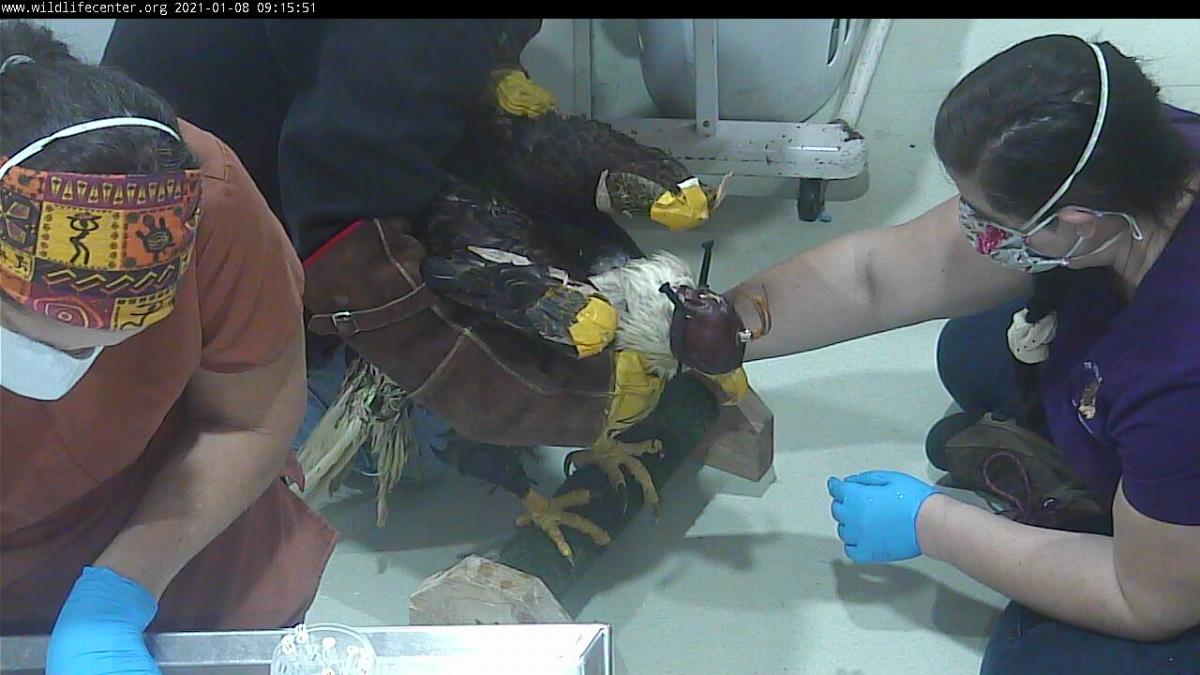 This bird has gained weight and is showing promising signs of continuing a successful recovery.

During the past two weeks, Bald Eagle #20-3699 has remained indoors in the Center's Hold area. While the bird has shown slight improvements in its appetite and physical strength, the veterinary staff continues to provide daily hands-on treatment. Each day the eagle receives pain and anti-inflammatory medications, the wounds on its right hock is cleaned and bandaged, and physical therapy is performed on the hind limbs.

A notable level of paresis is still present in both of the eagle's legs, but on December 28 veterinary staff observed the bird's ability to move all of its digits, and an overall improved musculature. To encourage the eagle to move its legs while crated indoors, the staff constructed a special hammock-like sling that provides support and allows for limited movement. 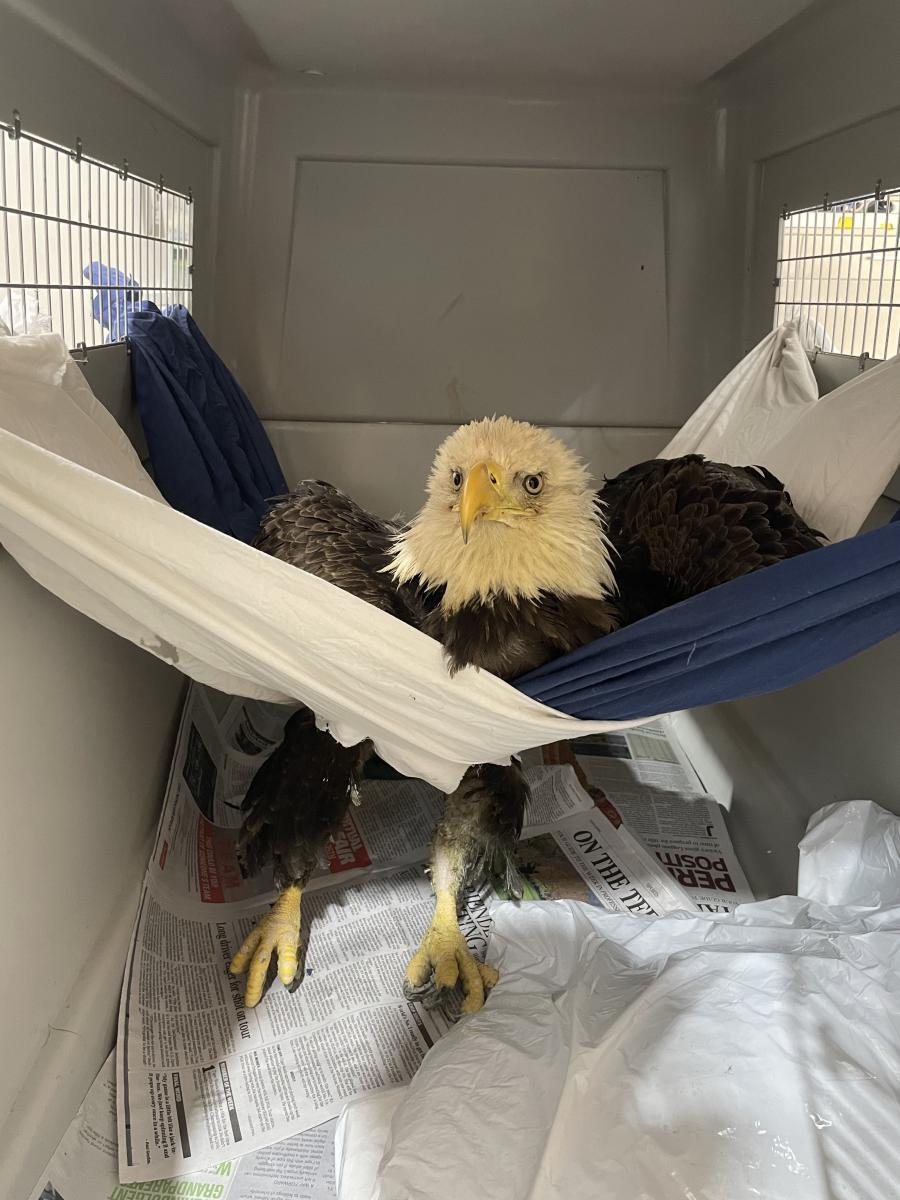 For now, the eagle will remain in Hold and continue to receive daily treatments.