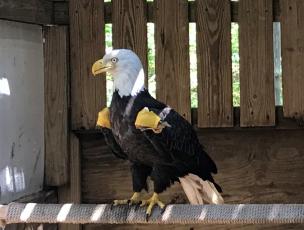 On August 15, an adult Bald Eagle was rescued in Suffolk, Virginia after being found on the ground and was unable to fly away. A local permitted wildlife rehabilitator stabilized the eagle’s condition, and on the following day it was transferred the Wildlife Center of Virginia for assessment and treatment.

Dr. Cameron, one of the Center’s veterinary interns, examined the eagle during an initial physical exam. While no bone fractures were noted, many bruises and abrasions were revealed, including a puncture wound to the eagle’s right shoulder. The wound was found to be infested with maggots, and the eagle’s very poor body condition lead the veterinarians to believe the bird may have been grounded for some time.

The remainder of the eagle’s physical exam was within normal limits.  Blood work was unremarkable, and the eagle had subclinical levels of lead that would not require treatment. Radiographs revealed a swelling of the soft tissues near the puncture wound on the eagle’s right shoulder, but were otherwise unremarkable as well. Based on these findings, the veterinary team suspects the eagle may have been in a fight or territorial dispute with another bird.

The veterinary team cleaned and disinfected the eagle’s puncture wound, administered fluids and pain medications, and began a daily regimen of supportive care and monitoring while the eagle remained in the Center’s indoor holding area.

By August 25 the veterinary staff noted that while the eagle’s puncture wound had remained infection-free, the wound was not closing on its own. To expedite the recovery process, veterinary intern Dr. Sarah performed surgery that day to suture the wound closed. During daily checks afterwards, the sutures were observed to have held in-place, no swelling or signs of infection were seen, and the eagle’s overall condition had improved.

On August 28 the bird was transitioned to a small outdoor enclosure in the Center’s C-Pens. During the coming weeks, the veterinary and rehabilitation teams will continue to monitor the eagle’s status, and evaluate the bird’s preparedness for physical conditioning in a larger flight pen.

Your donation will help provide care to this young Bald Eagle -- and 3,000 other patients that the Center will treat this year. Please help!

Rehabilitation staff have observed that Bald Eagle #20-2906’s physical conditioning has improved since being transitioned to flight pen A3. Initially reported as flying poorly, within four days the eagle showed notable improvement; on September 14, it’s daily exercise regimen was increased to between 5-10 passes of the enclosure. The bird will remain in flight pen A3 and receive daily exercise during the coming weeks. The veterinary staff plan to quickly examine the bird’s suture site during a routine feet and feathers check scheduled for September 28. Critter Cam watchers may see this eagle, along with Bald Eagle #20-2508, on Critter Cam #2!

Bald Eagle #20-2906 has been recovering well during the past week. Several days after applying sutures to the eagle's puncture wound, Dr. Karra noted the injury was healing very well and showed no signs of swelling or discharge. On September 9, the eagle was transitioned to flight pen A3 alongside Bald Eagle #20-2508, one of the Center's largest open-air enclosures. The sutures put in place by Dr. Sarah will eventually be safely absorbed by the eagle's body, eliminating the need for an indoor procedure to remove them. The bird will receive daily flight conditioning, and the rehabilitation staff will monitor the eagle's physical strength and stamina during the coming weeks.