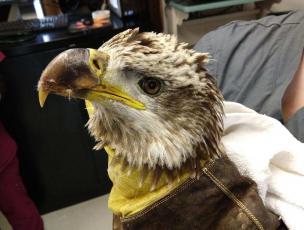 On January 27, a juvenile Bald Eagle was admitted from King and Queen County after it was found unable to fly.  The patient was first admitted to another wildlife rehabilitator, and immediately transferred to the Center where it was admitted as patient #20-0062.

Upon physical exam, Dr. Claire, the Center’s veterinary intern, found that the eagle had high blood lead levels, causing neurological symptoms which would likely contribute to the bird’s inability to fly.  The eagle started a course of chelation therapy, as well as fluid therapy to keep the bird hydrated.  Chelation treatment is a common treatment for lead toxicity – the medication is able to bind to lead in the blood, and it is excreted from the body through regular internal processes.  Veterinary staff plan to recheck the bird’s lead levels in five days to see if further chelation treatment is needed.

This is the second Bald Eagle affected by lead toxicity that’s been admitted to the Center this week.

Interestingly, radiographs revealed that the young eagle had eaten a meal recently, and still had the femur of an animal in her digestive tract.  Veterinary staff believes the 10.5 cm bone belongs to a cat or a raccoon based on its size.

Your donation will help provide care for this young Bald Eagle -- and 3,000 other patients that the Center will treat in 2020. Thank you!

On the morning of January 31, the veterinary team found that Bald Eagle #20-0062 had blood clots in her feces; they suspect that this is a result of bleeding in the bird’s gastrointestinal tract from lead toxicity. Unfortunately, the bird died on February 1 while in hand during morning treatments.

Dr. Karra suspects that the bird’s gastrointestinal wall was compromised, allowing bacteria to enter the blood stream, and the bird passed from sepsis. Resuscitation efforts were made unsuccessfully.  Prior to the eagle’s death, blood samples were sent to an outside laboratory to confirm lead levels; results came back at 1.2 ppm, which is the same level of lead that was confirmed at admission.