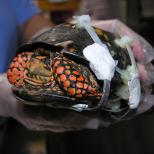 On October 8, this Eastern Box Turtle was admitted to the Wildlife Center after a Center volunteer found him in the middle of the road. Based on the number of shell fractures present, Wildlife Center staff are assuming that the turtle was hit by a car. With fractures extending over  the entire left side of the turtle's body, it seemed impossible that such a small animal could withstand that much trauma. Fortunately, it was just his shell that suffered the trauma; the injuries did not extend into his body cavity. 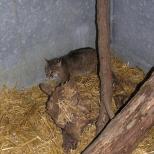 On Friday, October 15, the Wildlife Center admitted a rather feisty young patient -- a juvenile Bobcat. The bobcat was found in early September by the side of the road in Prince George County.  Her rescuers picked her up and took her to Joyce Bulls, a permitted rehabilitator in Sussex County.  Joyce became concerned about the bobcat's ability to hear, so she arranged to transfer the cat to the Wildlife Center.

A juvenile Tundra Swan was admitted to the Wildlife Center at the end of December 2010. The bird was noticed hanging around the same area in Augusta County for a few days, seeming somewhat friendly.

After consulting with our staff bird experts and several bird guides, the bird was identified as a juvenile Tundra Swan. This is a rarity for the Wildlife Center, as Tundra Swans only winter in Virginia, and typically are found along the coast. Tundra Swans migrate from their Artic breeding grounds each year. The swans arrive in Virginia around the end of November and stay until mid-March. 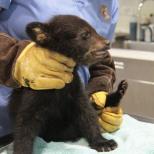 In early May, a homeowner saw a young Black Bear cub in a tree on his property in Bedford, Virginia. Two days later, the homeowner saw the bear again – but no sign of its mother. A DGIF biologist responded to the scene and brought the cub to the Wildlife Center of Virginia on May 3. 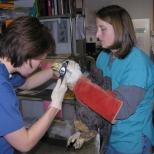 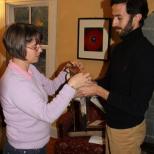 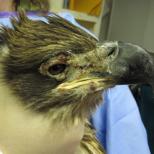