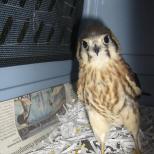 CAUSE OF ADMISSION:  Healthy orphan 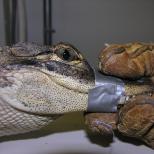 In the early morning of March 2, the Wildlife Center admitted an American Alligator [Patient #10-0111]. The alligator had been captured in Staunton and was brought to the Center by Staunton Animal Control.

Center veterinary staff did a complete medical evaluation of the alligator, including radiographs and blood tests, and found that it was in good shape. The alligator, reportedly seven years old, weighs just under eight pounds -- small for its age. The alligator has been housed in a variety of pens in the Center's reptile room. It has been fed herrings. 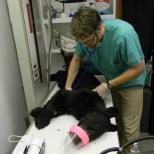 On August 22, a Black Bear yearling was found on a homeowner’s property in Rockbridge County, Virginia. The homeowner noted that the bear kept falling down when trying to climb a tree – and then laid on the ground. A DGIF biologist responded to the call about the bear, and was able to easily tranquilize the bear that same evening.

On Friday, June 8, a permitted rehabilitator from Maryland admitted another Great Horned Owl juvenile–patient #12-1209. This owl was rescued by park rangers at Cunningham Falls State Park in Maryland after it was mobbed by crows and knocked into the water. The rangers kept the owl in an aviary overnight but noticed that it vocalized when humans were near and begged for food. The rangers released the owl back in the park on May 31, but found the owl back at the release site the next morning. When a ranger placed food in a traveling crate, the owl hopped right into it to eat. 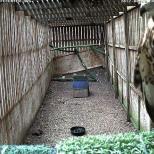 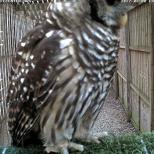 At the end of May 2012, a young Barred Owl was dropped off at a National Park Service office in Washington County, Maryland. The location of the bird’s rescue was unknown, so re-nesting was not an option – though the bird was in good condition. The owl was taken to a permitted wildlife rehabilitator, who in turn transferred the owl to the Wildlife Center so that it could be with other Barred Owls. 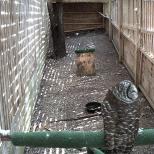 In April 2012, a young Barred Owl was found on the ground in Halifax County, Virginia. It was unable to be returned to the nest, and was taken to a permitted rehabilitator. After re-hydrating and feeding the young bird, the rehabilitator transferred the owl to the Wildlife Center. 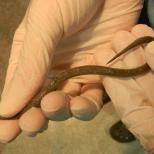 On Saturday, June 23, a man in Fluvanna County, Virginia rescued a small, young snake from his cat. He brought the snake to the Wildlife Center the following day, where it was admitted as patient #12-1432. Thanks to the identification help of the Virginia Herpetological Society, the snake was identified as an Eastern Smooth Earthsnake. 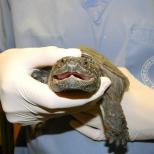 On June 18, a person was fishing in Rockingham County and came across a variety of fishing gear that was left behind – a pole, a spilled tackle box, and various fishing equipment. The fisherman also spotted a young snapping turtle near the tackle, with a long piece of fishing line sticking out of its mouth. The person caught the turtle, and called the Wildlife Center of Virginia.