On September 21, 2015, a young female Bald Eagle was released in Westmoreland County, Virginia, near the George Washington Birthplace National Monument. The hatch-year eagle was rescued from Smarts Creek in June 2015. Read more about the eagle’s history and rehabilitation here. Prior to release, the eagle was fitted with a GPS transmitter.

On October 22, 2015, a young female Bald Eagle was released at Belle Isle State Park, Virginia. The hatch-year eagle was rescued from Northumberland County in June 2015. Read more about the eagle’s history and rehabilitation here. Prior to release, the eagle was fitted with a GPS transmitter.

During the month of October, opossum #21-3141 received two more courses of chelation therapy to remove the lead in his system. A repeat lead test performed on October 31 came back positive for lead, though the result of 0.034 ppm indicated a much lower subclinical level. Normally, the veterinary team would continue chelation therapy until all of the lead in a patient’s system is removed. However, because this opossum had undergone five courses of chelation therapy, which can be hard on the kidneys, they decided not to administer another round of treatment to remove the remaining lead. 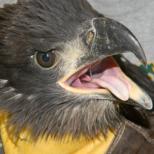 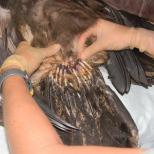 On May 20, a young Bald Eagle was found on the ground in Fort Washington, Maryland.  Unsure of where the nest was located, the rescuer took the eaglet to Feathers & Friends Wildlife Rehab Center.  The permitted rehabber there found maggots at the base of the bird's tail -- where a couple of blood feathers were broken.  This may have happened in the nest, or perhaps during the fall from the nest -- and flies typically don't take long to settle in with those types of injuries.  After cleaning out the maggots and offering 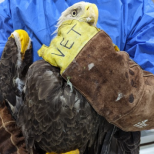 On August 18, a private citizen in Buena Vista, Virginia found an adult Bald Eagle in his backyard; the eagle was laying on its side and was not able to right itself when approached. Center staff were later alerted to the situation and contacted the Department of Wildlife Resources (DWR) to coordinate the eagle's rescue. Later that day, DWR wildlife technician Phillip Hanger responded to the scene, contained the bird, and brought it to the Wildlife Center. 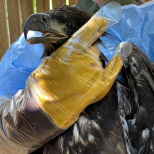 On June 1, the Center admitted a juvenile Bald Eagle from Virginia Beach. A homeowner found the eagle in their yard and noticed that it was on the ground all day. Concerned that the eagle was injured, the homeowner contacted permitted wildlife rehabilitator Lisa Barlow, who sent another rehabilitator to rescue the eagle. The eagle was later transported to the Wildlife Center. 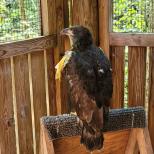 On May 11, two Bald Eaglets were admitted to the Wildlife Center from Lake Anna, Virginia. Both birds were found on the ground; while an adult eagle was seen flying in the area, both young birds appeared to be lethargic and possibly injured. A Louisa County animal control officer was able to contain both birds and transported them to the Center.

On admission, veterinary director Dr. Karra examined the birds. No injuries were found on the physical exams or radiographs. Both eaglets received fluids and were set up in the Center’s holding room for care and observation.